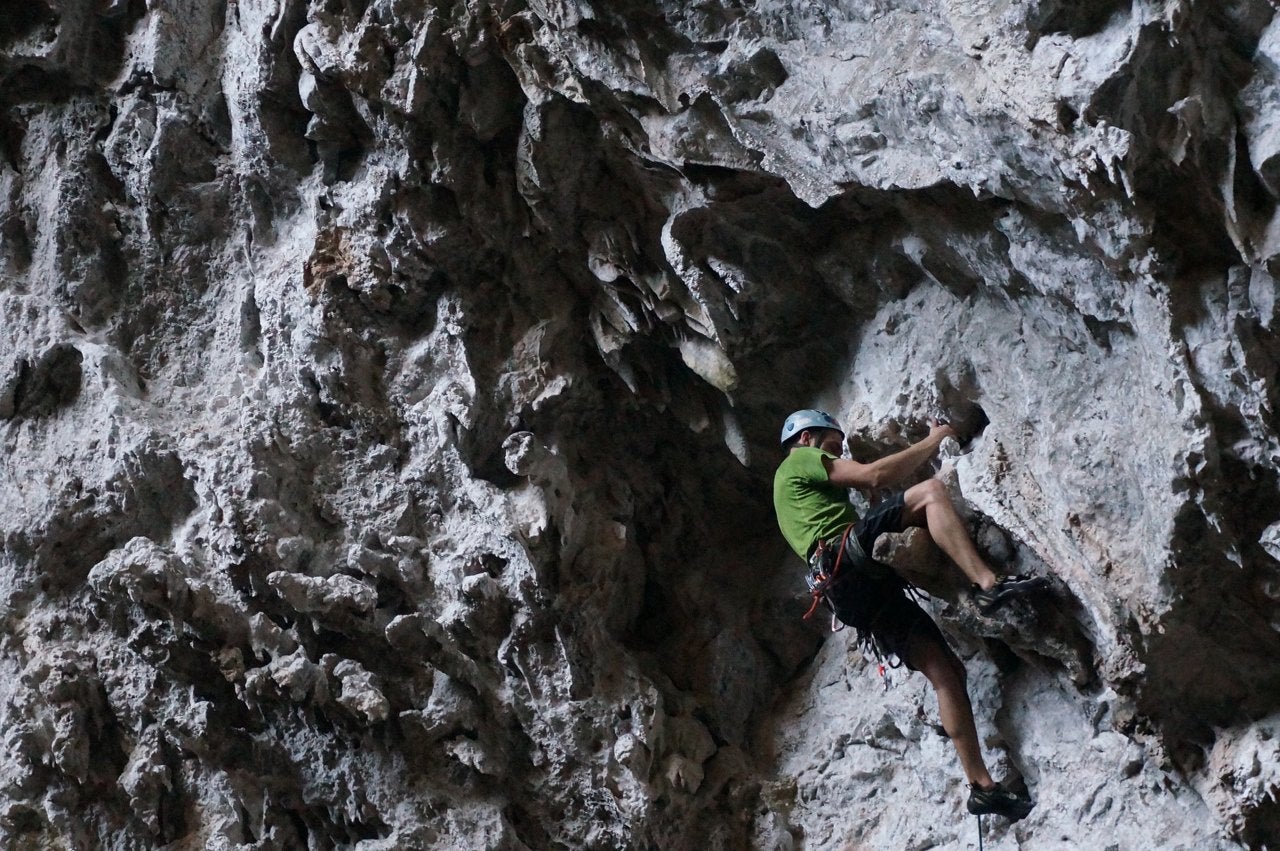 I rubbed my eyes in our Uber ride on the way to the Mexico City Sur bus station, trying uselessly to smudge away the blur of the densely smoggy view out the widow. It was Christmas morning, and the city of 21 million inhabitants was a ghost town. Our Uber driver flew down the streets past the neighborhood of Coyoacan. In less than 20 minutes and for less than 80 pesos (about $5), we arrived at the bus station across town. We'd only been in Mexico City for a short sleep, but the clock was ticking—it was time to seize a little adventure.

We boarded the bus for the state of Guerrero, perhaps Mexico's most dangerous state. The CDC gives Guerrero a travel warning level 3: Avoid Nonessential Travel. Guerrero holds the nation's highest murder rate. The state produces 60 percent of the nation's heroin and opium. More than a half dozen cartels are currently engaged in vicious turf wars for control of valuable trade routes and production centers in Guerrero. Both our parents expressed some unease about our desire to travel to this seemingly dangerous country.

But to be honest, my worry was more internally focused. About a month prior, I had pulled out a hang nail that got infected, eventually sending me to the ER after the first round of antibiotics didn't cure it. Two days before our trip I found that the second course of antibiotics wouldn't cure it either. With a lanced finger still open, it would be all too easy for new bacteria to enter from a lifestyle of climbing and camping in a hot and humid developing country. We had done extensive research on the Internet and talked at length with friends who had frequented our intended destinations to put to rest any concerns about traveler safety. But the anxiety around a potentially worsening infection in a remote location wore heavily on us. Thankfully, persistence and a good doctor helped us prepare for this dirty environment so we could put our fears behind us and focus on the purpose of our adventure: rock climbing. Surprise, surprise.

Three casual hours passed on our "Lujo" (read: luxury) bus before we arrived in the beautiful city of Taxco. Taxco is one of Mexico's gems, with bright Spanish colonial architecture stacked on top of itself among lush hillsides, bursting with fresh air. It's a very safe town despite being nestled in the state of Guerrero, and is a touristy one at that. Had we more than eight days total in Mexico, we would have loved to spend some time in this community and visit its tourist destinations: Pozas Azules—blue ponds—and the silver mine being among its most cherished attractions. But time was ticking, so like the Mad Hatter, Ben eagerly dashed off the bus and returned moments later with three 5-gallon jugs of water and a well-worn Volkswagon Beetle with a kind-eyed driver, ready to take us to Don Procopio's ranch in the middle of nowhere. His ranch serves as the launch point for our first climbing destination: the Chonta cave.

There was only one problem: our taxi wouldn't start. But as with any good Latin adventure, there's no point to getting stressed. Ben understandingly popped out of the back seat and pushed the Beetle down the narrow, windy street until it sputtered and started. A stop for fruit and a couple wrong turns along the way and we had arrived at the driveway of Don Procopio's ranch. Don Procopio was out for the day, but we were greeted by a couple of his 15 children. Not 10 minutes had passed and we had strapped our heavy packs to a small caballo, paid the family for a thin guidebook printed in glossy color to the climbing in the Chonta Cave, and set off in the heat of the day with Fernando, Don Procipio's 15-yr old son. 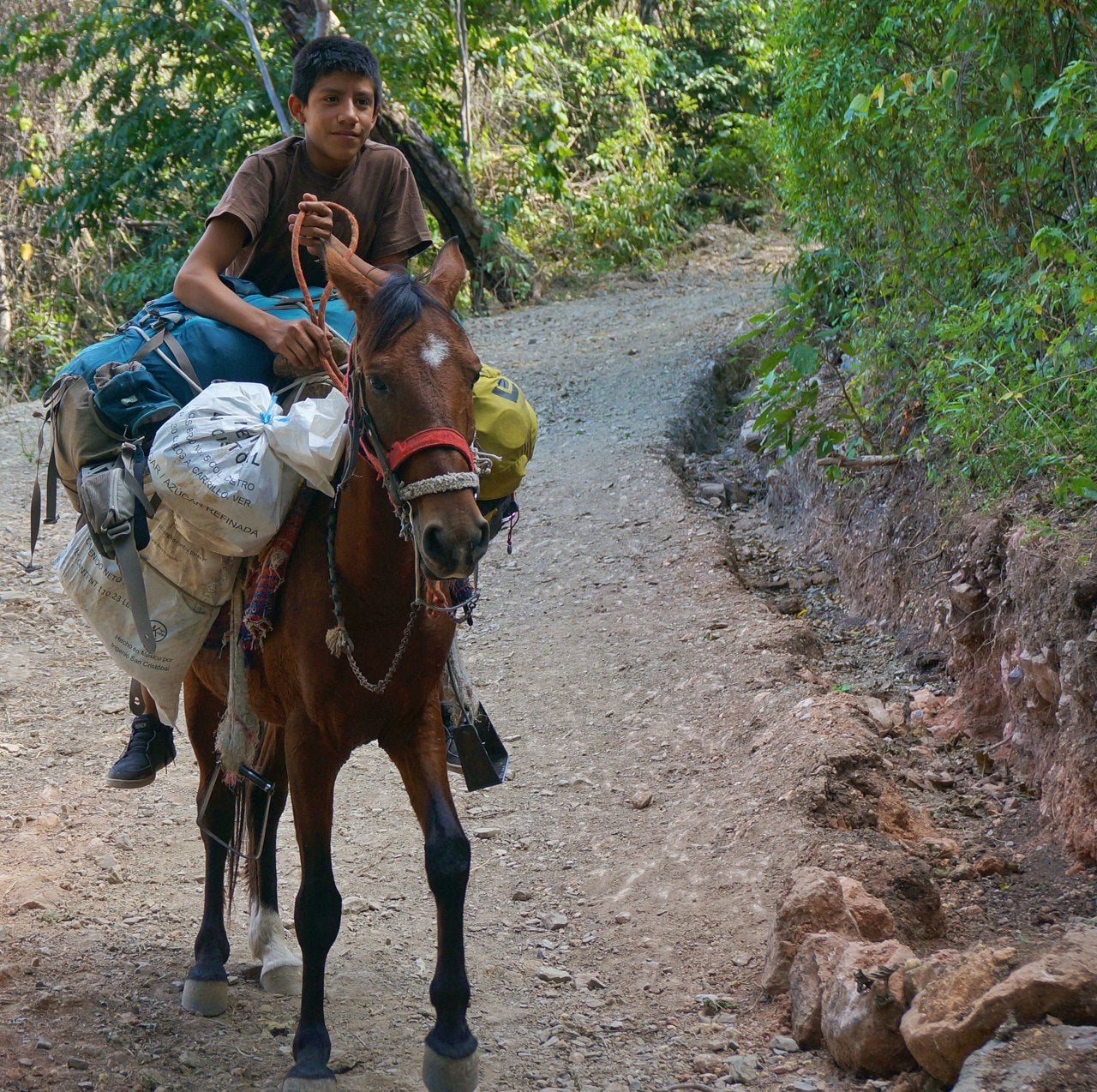 The hike to the cave was hot and dry, with grasshoppers and butterflies clearing the way for us. A bit tired, I was relieved to find the uphill portion of the second half of the hike in the shade of the trees. Thankfully, the horse bore the weight of our packs and the walk lasted only about 45 minutes. Just as I was pleading to Ben for a quick water break, Fernando blurted in uncanny timing, "Llegamos," we have arrived. 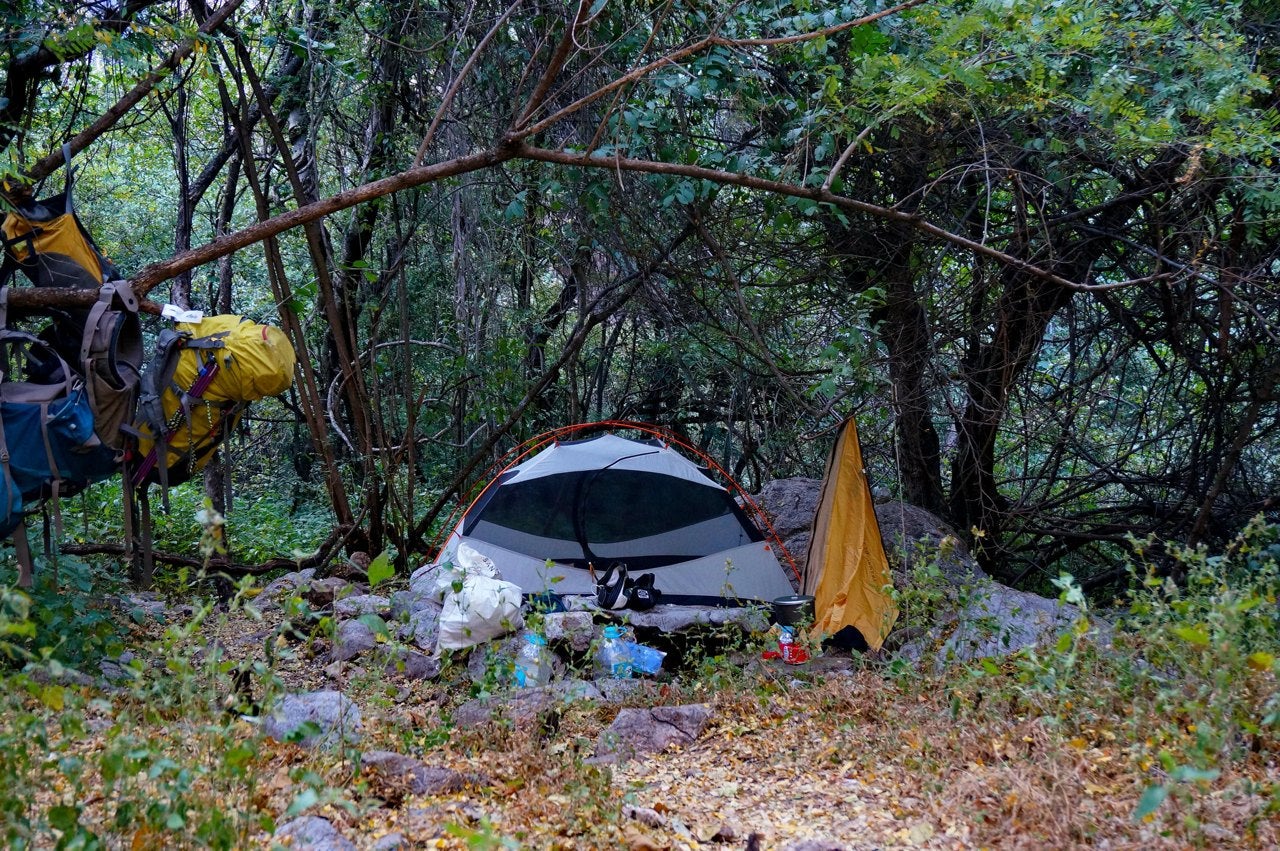 We dumped our packs, set up our tent in the best spot we could find among the trees along what seemed to be a saddle, hanging our bags, always closed, to keep scorpions from getting in them. Then we headed down toward the cave with our climbing gear ready. Despite all the unknowns, our voyage here had gone surprisingly smoothly and efficiently, thanks in large part to all the welcoming locals who helped us find our way. It was 2:30 p.m., though we could hardly guess the time in the deeply shaded cave.

From the rim, we couldn't believe our eyes. Neither the images watching videos from the Petzl Rock Trip 2010 nor pictures in Mexico climbing guidebooks could do this place justice. The cave seemed to descend down to an abyss. 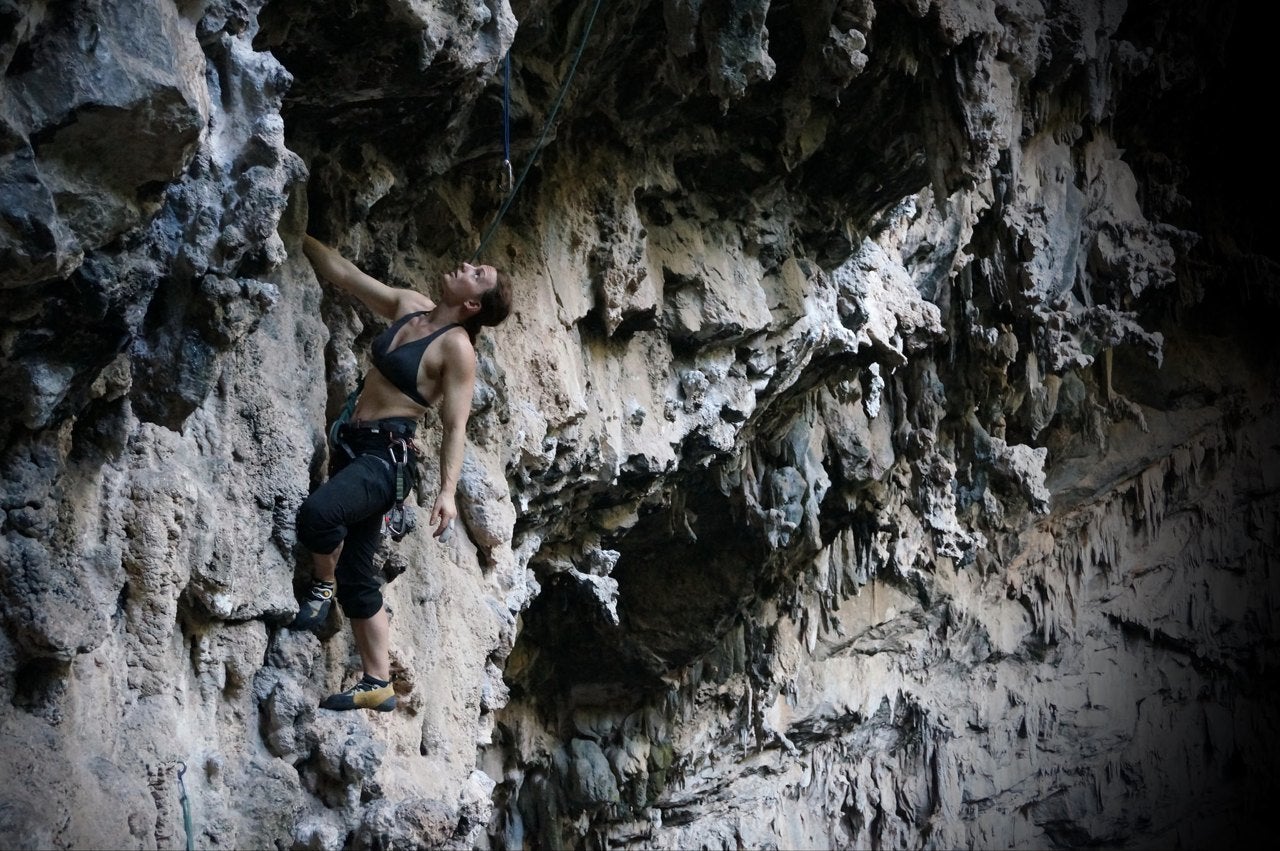 The cave is even steeper than that of most notoriously steep areas like the Red River Gorge or Thailand. On many climbs, one returns to the ground almost as far out from the base as the distance they climbed upward. However, the dripping, odd formations of the limestone stalactites and stalagmites provides 3-dimensional pathways upward where it would otherwise be impossible. The style of climbing is so completely physical and so different from the granite cracks we are used to climbing at home in the Pacific Northwest. 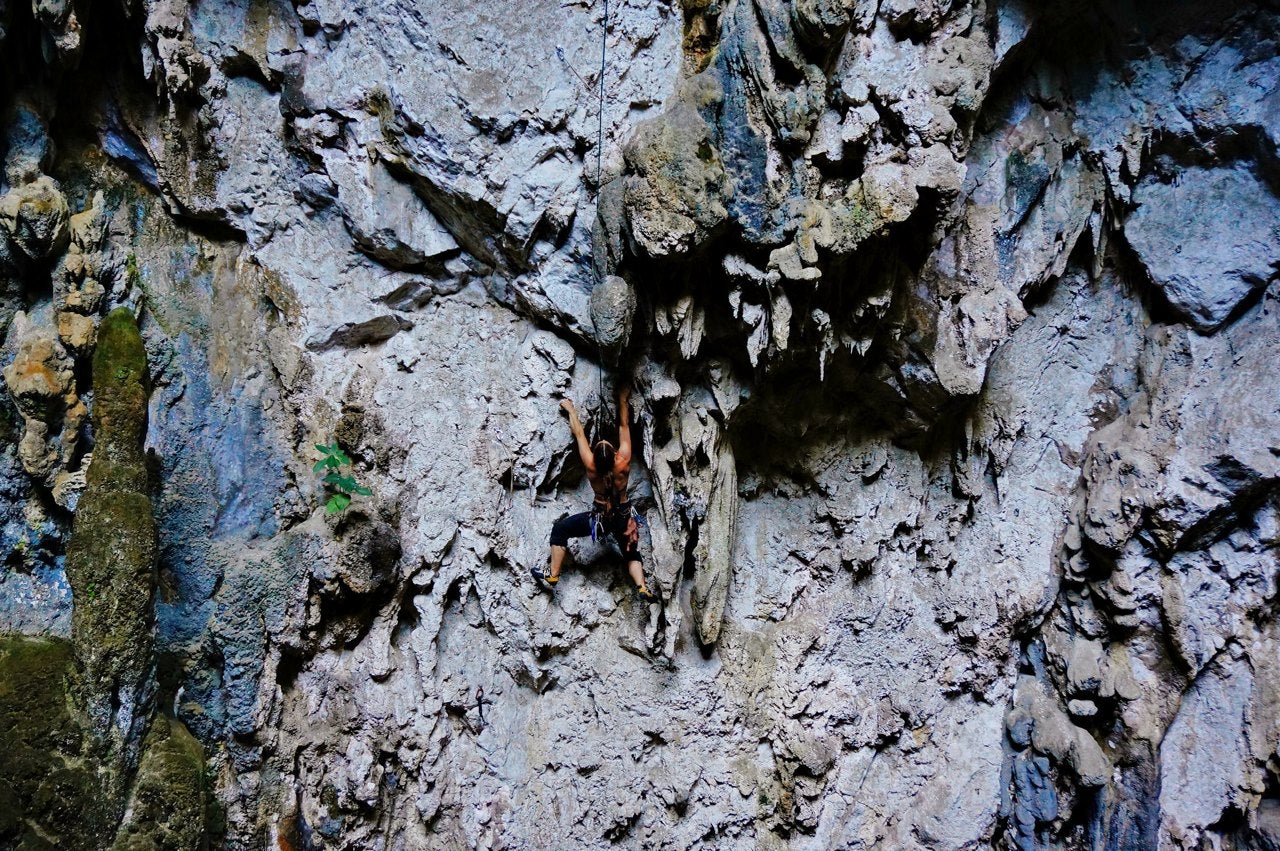 With the cave's warm-up being a steep 5.11a, we weren't sure how many routes we would actually make it up during our first trip here. So, to stack odds of finishing a route in our favor—and not leaving behind draws by bailing early—we picked up the Epic Stick Clip by Liberty from my job at Second Ascent. It's basically a collapsible tent pole with a clip that holds your carabiner open to clip the next bolt. It was so lightweight that it seemed like a no-brainer to bring along. And thank goodness we did, because it helped us navigate through a couple crux sections where we felt tapped out!

This is an area that best suits 5.12-5.14 climbers, but with the safely-spaced bolts and with most falls into air without crashing into rock on the way down, it's a great place for those seeking to project climbs and push their abilities. The climbing, and the atmosphere, are completely classic. In fact, many people who climb at Chonta, do just that: project and push their grades. We met one such gentleman not 10 minutes after arriving at the cave's rim. John, a self-proclaimed "square" from Moab, Utah, with short hair and wire-rimmed glasses, drove his Sprinter van down to Chonta with his partner, Dave from Colorado, stopping at El Potrero Chico and all the other classic climbing destinations along the way. It was probably his fifth time a El Chonta, and he had the logistics and the climbing wired. One set of draws he hung on the 11a warm-up climb, another set on his 5.13b project, and a third set he kept free for trying other climbs in between. He's in his mid-50's, and climbing the strongest of his life.

It was John who taught us most about the unique characters and characteristics of Chonta, along with many other interesting parts of Mexico. We also learned a lot from Mexico City locals, usually during meal time while sitting in a fire circle over our stoves, headlamps glowing. John and Dave really made us feel welcome there (Thanks, guys!). Chonta climbing and lifestyle was small, intimate, and simple. Climb, eat, sleep and repeat. It's lush and wild, at times feeling remote and other times feeling like we were just on the outskirts of society. At night sometimes, we'd stuff in our earplugs to drown out the Mexican Ranchera music, echoing off Chonta's cave walls. Other times, we'd wake to a crash in the forest of some large, unknown creature testing it's ability to fly among the trees and failing.

We woke early our third morning to such a crash, just minutes before our 6:30 a.m. alarm chimed. In the pale light and pleasant morning breeze, we packed our bags and shoved food into our aching bodies, too stiff at first to move from the last two days of climbing. As much as we needed a rest day, we had to climb at least a couple routes to recollect our draws from the night before. We were on a timeline to meet one of the Procopio kids and their horse at 11 a.m. to collect our heavy bags for the trek back to the road. So by 8 a.m., our bags were packed and Ben was on belay, the cave still a bit chilly.

By 12:30pm, however, we suspected our horsey was not coming to rescue us from the burden of bearing heavy loads, so we sucked it up and donned our packs. I hoisted on our large 50-pund pack and Ben strapped together the other three. To our surprise, our tired bodies huffed the gear out just fine, and in an hour we had hiked out passed Procopio's ranch in the direct heat and one kilometer down the road to wait for a bus to Toluca.

The bus stop was a dusty community of only a few simple cement buildings along the roadside. We waited, drying our sweat in the sun, and eased our heat exhaustion with a refreshing cold Squirt until we could take in no more sugar and syrup. Two men and a young boy who were sitting at a plastic table under the shade of a tree, playing cards, approached us with stern expressions. 'Oh shit," I thought to myself as I stiffened. 'Here we go.'

The boy was carrying something large and dark. I looked more closely as they approached Ben first, thinking it might be a knife. Somewhat relieved, although bizzarre, I realized it was an iguana! Just then, one said to Ben in a low, hushed voice, "Quieres tocar mi iguana?" ("Do you want to touch my iguana?")

Then they tried me, "Quieres tocar mi iguana?"

Without making eye contact, I parroted Ben's response, "No, gracias."

To my amazement, they walked back to their plastic table and chairs and resumed playing cards until our bus arrived.

On the overcrowded bus to Toluca, I grinned at the somewhat silly interaction that had transpired and leaned forward to Ben's ear. "Quieres tocar mi iguana?" I whispered into his ear.

"Those guys back there at the bus stop. They asked us if we wanted to touch their iguana. Isn't that silly? See tourists and try to make money off their iguana?"

This interaction with the locals was the most trouble we received from anyone our whole trip.