The Betrayer Of Hope: Bayard Russell's New Route On Newfoundland's Blow Me Down 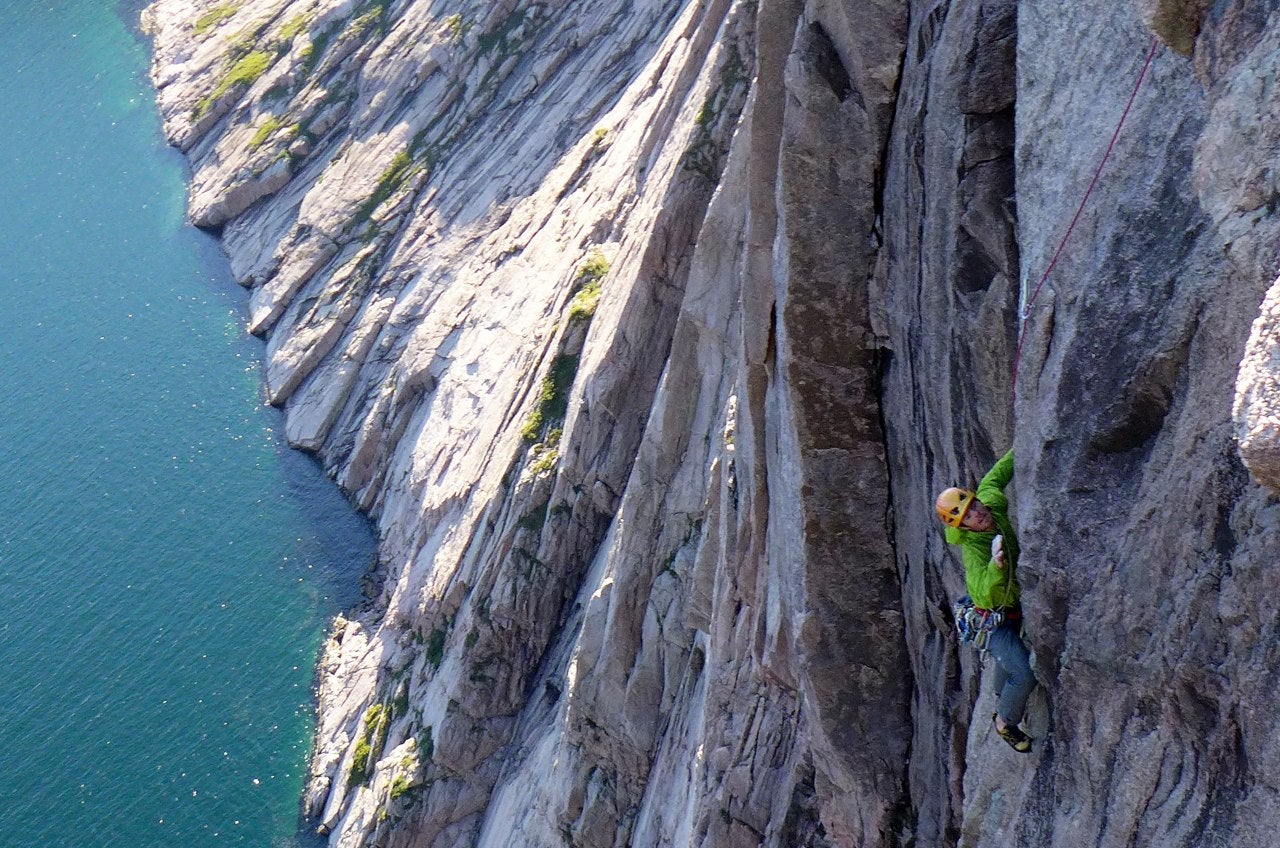 We were out of time and out of bolts as Sam Bendroth and I coiled our moist ropes. It was raining, we had just freed what would eventually be the crux pitch of a new route, and we knew we had a long way to go. I think on any long first ascent there have to be moments of doubt—it’s just a lot to ask of a granite wall to have a continuous passage of free climbing of 1,000 feet or more. We just had a long moment in front of us. In a light drizzle in September of 2014, this is where we left our project on Blow Me Down on Newfoundland’s rugged Southwest Coast.

I don’t mind having a project drag out. I like to think about it, and over the next 11 months I had plenty to think about. The upper portion of the cliff changes character immensely from the steep slab of our lower pitches. It becomes a series of roofs, cracks and corners. Dividing them is a 10-foot roof with an immense detached block hanging out of the base of the corner we hoped to climb. I came to call it the “cork.” Although very steep, the upper 600 feet of the cliff are very featured, so we guessed a way through would present itself. But the cork might be impossible to bypass. It seemed like it would come down to 5 feet of detached granite. 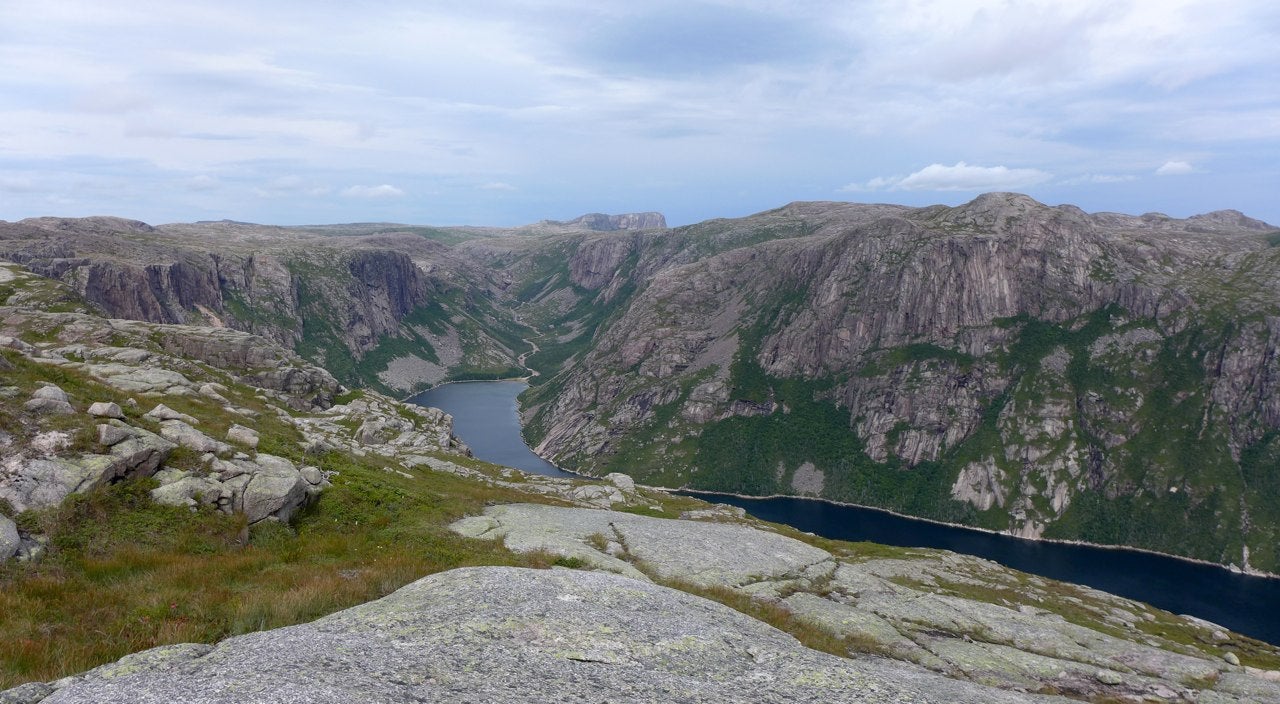 Sam met me in Bangor, Maine, this September when my wife had dropped me off on our way back from our 5th wedding anniversary weekend in Bar Harbor. Ten hours later we were boarding a ferry in Cape Bretton Island, Nova Scotia. Seven hours and good night’s sleep later, we were on the island of Newfoundland, but still a day’s journey from our destination. A doughnut and a quick cup of Timmy Horton’s coffee and we were off for another drive to the small town of Burgeo, three or four hours away at the end of the road.

We arrived just in time to watch the next ferry pull in and load all our gear onto a pallet to be boomed into the ferry’s hold. Five and a half hours and one stop later, we arrived in the tiny roadless outpost of Francios, Newfoundland—one of the most beautiful towns I’ve ever seen. It was about 6 p.m. as Goerge Fudge pulled his fishing boat alongside the ferry and the boom dropped our pallet of gear aboard the “Royal Oak.” Without touching solid ground, we continued on our way into Devil’s Bay about an hour away, home of one of the Blow-Me-Downs, as a few of the cliffs in this area are called. This one 1,200-foot sea cliff is referred to as Jabo by the locals. 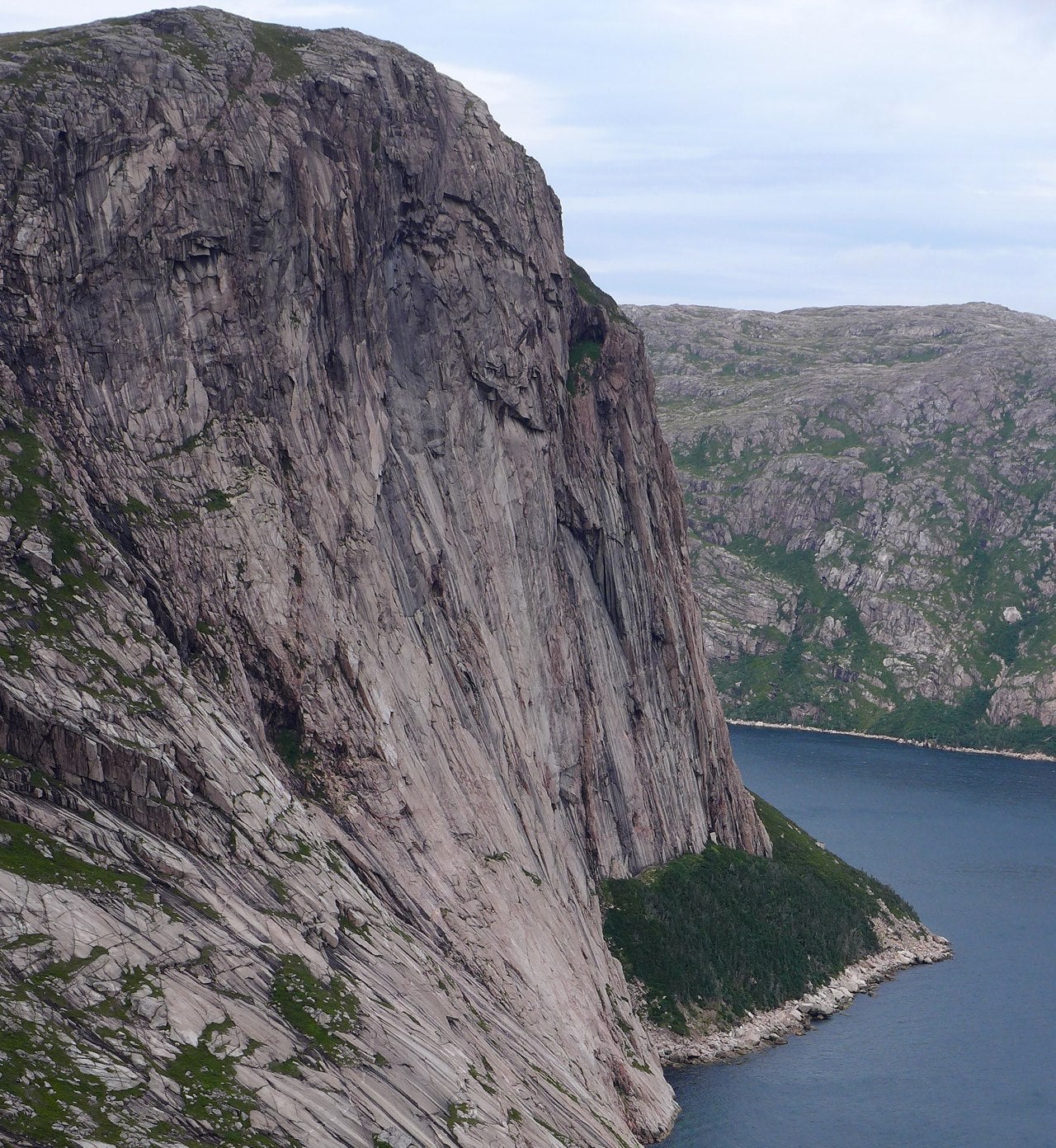 Unsettled maritime weather was the routine for the first week we were there: thick fog, quick episodes of clearing and bouts of intense wind. Nonetheless we proceeded to fix ropes down from the top of the cliff, pitch by pitch deciphering a free line that was independent and continuous until just above the midpoint roof that was home to that huge detached block.

I rappelled over the roof and a quick glance at the ”cork” was all I needed to know I didn’t want to be anywhere near that refrigerator-sized chunk of seemingly unattached granite. Further reinforcing our need for a different way, the corner we had hoped to climb turned out to have no gear anyway. I swung like a pendulum back and forth across the face, my anchor more than 100 feet above me, looking for other options. 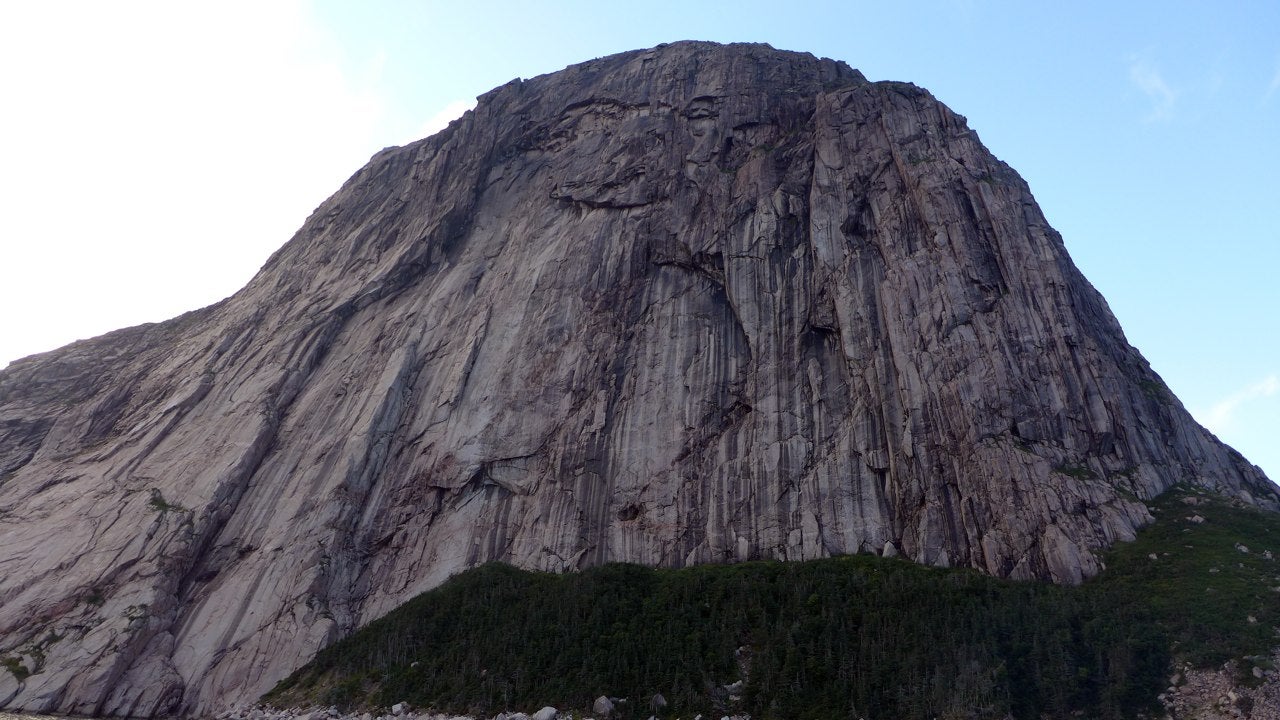 I hemmed and hawed and finally settled on an incredible line of holds, in a terrific position, traversing across above the lip of the roof. While the meat of the pitch looked great, to get there we would need to climb through a wet chimney marked on another party’s topo simply as “NO!” Later that day we bolted a connector pitch, following the line of weakness across an incredibly steep slab that linked our previous highpoint to the bottom of our fixed ropes.

We jugged out 700 feet one last time, cleaning our ropes on the way and lugging them all back to basecamp. That afternoon we took five of them and fixed the traverse above the sea that accesses the cliff base.

Our 7th day in Devil’s Bay was beautiful, perfect climbing weather. Blue skies, low humidity and comfortable in the sun. We started up from the ground, swinging leads, so psyched to just be climbing. The third pitch is a slippery 5.12 number that spat me off just a foot from the end of the crux. I stripped all the gear and led it again, this time successfully. 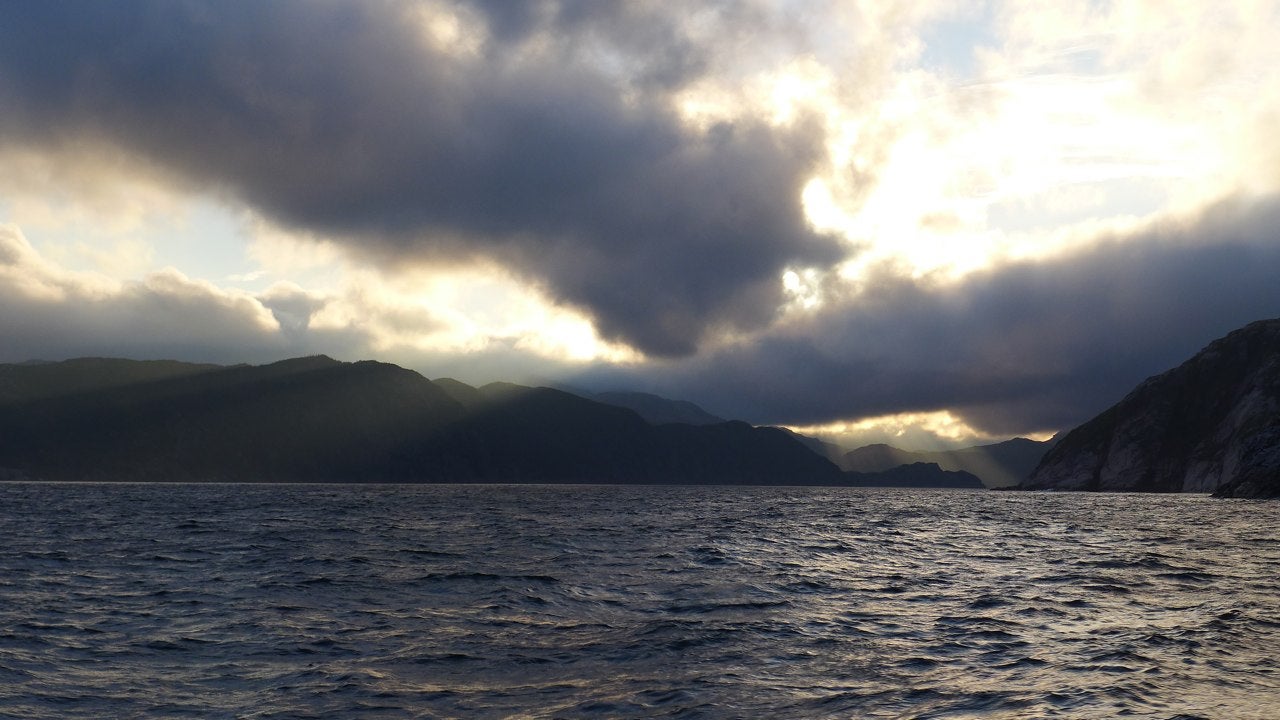 After another pitch we were on the blank slab, and it was desperate. I had top roped all the moves the day we bolted it, but neither of us could make it happen altogether. You would be feeling fine, carefully moving, and suddenly you’d be off and hanging on the rope. So I got sneaky. We cleaned the gear and started up the pitch one last time, and after some 5.11 slab climbing I fixed a nut and down climbed, reaching a ledge system that brought us over to Chris Weidner and Justen Sjong’s Lucipher’s Lighthouse for some 4th class. Sam followed, we hauled our mini hual bag sideways and exited their route, climbing some soaking wet 5.9 to get back on our line. It wasn’t pretty, but it worked.

Another six pitches later, mostly strenuous 5.11+, and we were topping out with headlights on while the Newfoundland gave us a pink sunset.