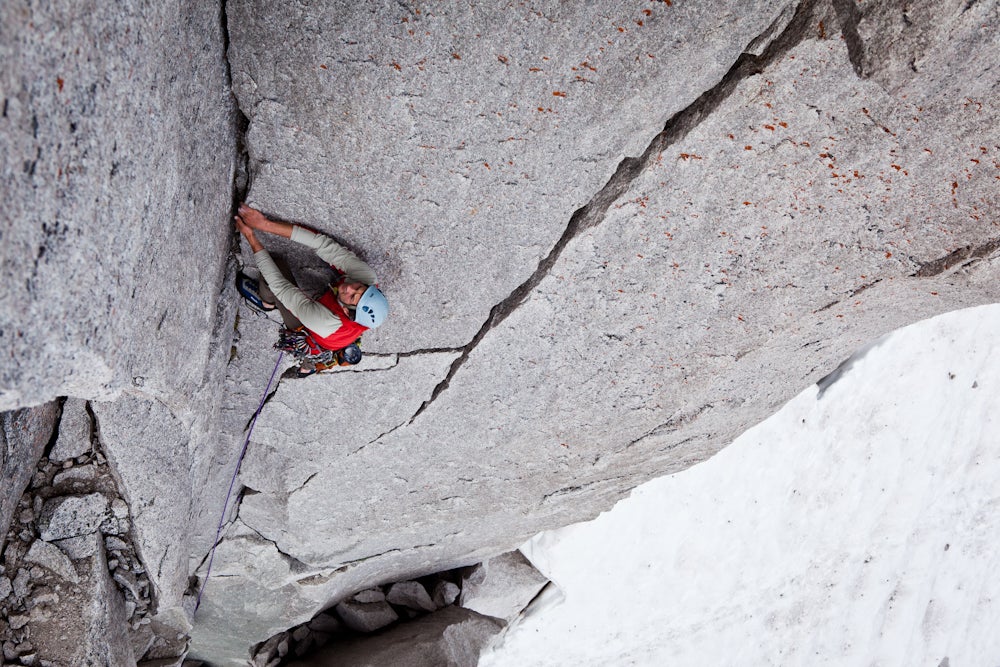 Getting There:  Climbing in the Bugaboos feels remote and wild, so it surprises many that access to the area is so easy.  Bugaboo Provincial Park is located in the Purcell Mountains, about thirty miles west of the extremely small town of Brisco, BC.  Reach Brisco by heading north on U.S. Hwy 95 out of Idaho or south on Hwy 95 from the town of Golden, BC.  From Brisco, cross the Columbia River on a paved road that eventually turns to gravel, and continue for about 28 miles, following signs for Bugaboo Provincial Park until you reach a large parking lot at road's end.  Park here and perform the classic Bugs ritual of wrapping your car in fence posts and chicken wire - local porcupines have a thing for eating rubber.  From the west end of the parking lot, begin the steep hike up to the Conrad Kain hut.  The trail gains 2100 feet in just over three miles so pace yourself and enjoy the spectacular views.  Most climbers continue uphill past the hut ($25/night, first come first serve) for another kilometer to reach Applebee Dome.  Here you'll find plenty of open space to lay out a base camp for your time in the Bugaboos.

To reach the Beckey-Chouinard from Applebee Dome, traverse west across the Crescent Glacier and over the Bugaboo-Snowpatch Col, then cross the upper Vowell Glacier to the Pigeon-Howser Col.  Drop down into the East Creek basin and trend right until you reach a small moraine.  Tent and bivouac sites can be found here near a gigantic boulder.  It is possible to climb the route round-trip from Applebee, but be prepared for a very long day in the mountains.

What You Need:  The Beckey-Chouinard is long, sustained, and committing.  While the route itself is a pure rock climb, the approach requires extended snow and ice travel over multiple glaciers and cols.  Bring a pair of crampons and an ice axe for each person in your party.  For the route, a single set of nuts and a standard single rack up to 4", with extra pieces from 0.75" to 3" should suffice.  This is true alpine climb, so make sure to bring a helmet, warm clothes, and a rain shell in case the weather turns south.  Given the length of the climb, most parties should bring at least two liters of water per person.  Do not make the mistake of forgetting your headlamp - you're probably going to need it.  A common strategy is to have the leader carry a small pack with food and light clothing while the follower carries a larger pack with water, shoes, and snow gear.  It might seem crazy to head up such a long route with so much stuff, but you'll be glad to have it if you run into bad weather or are forced to bivy - a fate many parties have experienced on this route.

History:  In the late summer of 1961, the indomitable Fred Beckey teamed up with friend, frequent partner, and fellow climbing pioneer, Yvon Chouinard, for an attempt on the alluring West Buttress of South Howser Tower.  Beckey had spied the line two years previous and surmised that a route could be forged up the sweeping fin of the buttress.  The pair completed the climb over two days in August, finding on their way consistent 5.8-5.9 climbing, brief 5.10 cruxes, good belay stances, and even a spacious bivouac ledge.  Few climbers who attempt the route today know that the first ascent almost ended in tragedy at its outset.  On the morning of August 8th, Chouinard ascended a fixed line at the base of the route, only to find part-way up that a group of ravenous rodents had nearly chewed through the rope on which he was hanging.  A fall would have been fatal.  Luckily, the rope held, and the two regained their composure and carried on.  The climb was a true classic from the moment they stood atop the summit - a clean line with few diverging crack systems, ascending an imposing, prominent feature in a wild and remote setting. Can it get much better than that? The answer – nope.  This may be the best climb on the planet.

Local Beta:  The last place to pick up supplies at reasonable prices is either Radium Hot Springs or Golden, though there is also a small store in Brisco.  Squirrels, marmots, and other rodents are the stuff of legend at Applebee Dome and East Creek Basin bivy sites, so make sure to store your food in a secure spot.  For those willing to plan ahead, a few choice beers placed in the small stream about 15 minutes up the trail from the parking lot are a wonderful site for sore eyes (and legs) on the descent.  While late summer brings the best weather windows for long alpine climbs, it also brings frequent thunderstorms in the afternoon.  Puffy clouds in the morning are a sure sign to bail or postpone the climb a day or two.

Extra Time: If you're heading up into the Bugaboos to climb the Beckey-Chouinard, you probably planned at least a few extra days to climb some of the other classics in the area (or at least, you should have).  Don't miss out on the West Ridge of Pigeon Spire (IV 5.4), the Northeast Ridge of Bugaboo Spire (IV 5.8 10 pitches), or McTech Arete on Crescent Spire (III 5.10- 6 pitches).  Sunshine Crack on Snowpatch Spire (V 5.10+/11- 8-10 pitches) is one of the most sustained and beautiful climbs in the area. Athlete's Perspective:  "The Beckey-Chouinard is probably the most classic alpine rock climb in North America.  It has so many classic features to it -- the commitment factor of the wild East Creek Basin, the huge exposure, and a fifty meter pitch of 5.10 finger cracks three thousand feet off the deck.  It doesn't get more special than that."  - Evan Stevens
← Previous Next →
Comment(s)
Find a local shop
Hold on