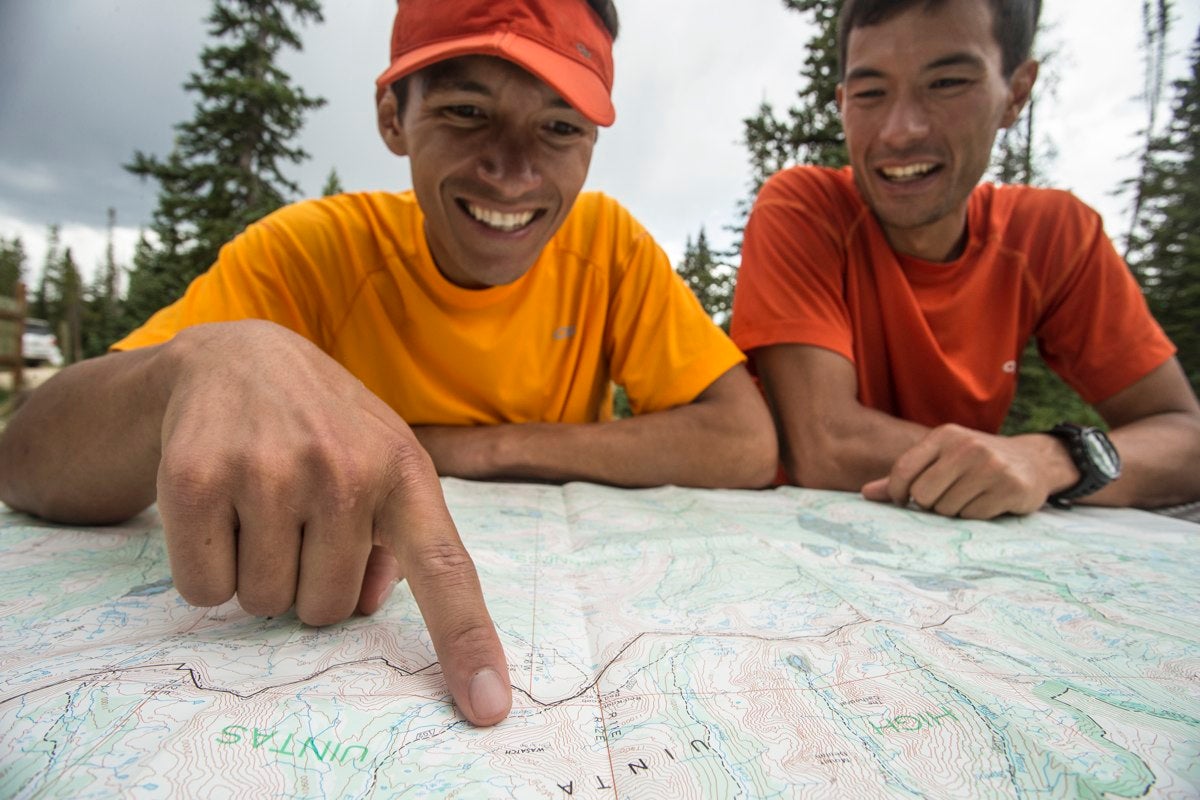 This was not how it was supposed to go. Dr. Andy Dorais had cruised the first half of his time trial at the U.S. Ski Mountaineering Association sprint championship in January. But slicing quickly into the kick turn section at Snow King, he somehow stepped out of his binding. “Staying calm, I attempted to click back in, knowing that a few seconds lost wouldn't make a huge difference at this stage,” he says. When he realized his binding had actually catastrophically failed—a key piece shearing clean off—his calm vanished, replaced by a roar of skyward obscenities.

The next two racers catching up to him each offered their own skis to continue. Andy declined, instead tramping down to ask the judges for a second chance as the race continued, a new skier setting off through the course every 30 seconds. The judges allowed Andy to get back in line at the end, and try again—if he could find a ski that would work.

You could say it was Andy’s lucky day because his brother Jason, also a skimo racer (and also an ER doctor), happens to wear the same boot size. And happened to be right there with a loaner. But maybe it wasn’t luck—and it wasn’t really that out of the ordinary, either. Which might, actually, make their life in general seem pretty out of the ordinary.

Andy strapped on the spare and finished his second attempt fast enough to qualify for the final—which he won. Pushing hard for the finish, he could hear Jason’s scream: “They’re gaining on you!”

“But I knew he was full of shit,” Andy says. “Here, even while not racing him, he was trying to make me hurt. He yelled the same thing at each subsequent racer, even if no one was in sight.”
Sure, these guys are competitive. The two brothers—who look alike, share gear and clothes, and even work at the same hospital—might actually be their own biggest competition. But their relentless drive to go faster, higher, farther doesn’t revolve around racing. “Most days, it’s about being outside in these places with friends,” Jason says. The thing is, a weekend warrior-style outing for these two ER docs still errs more on the fastest-known-time end of the spectrum. Like the Grand Teton on skis in 5:17. Or Mount Rainier in 3:57 on skis. 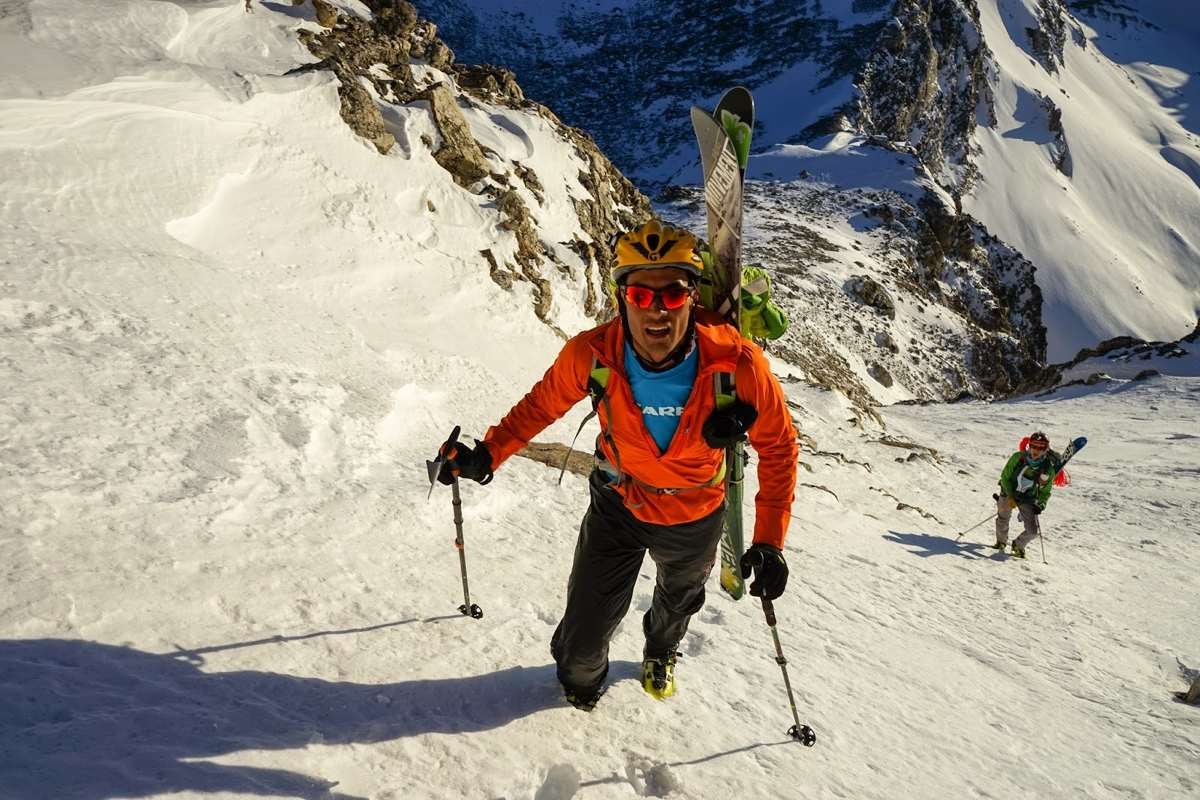 Both Andy and Jason ran track at BYU, and started climbing during their undergrad years and skiing during med school. Having grown up watching their dad’s slide shows from the 70s—the Tetons, beard, old school equipment and all—they were inspired to get out on their own, squeezing in missions between school classes and then, later, between residency shifts. But one outing shifted the course of their adventures from then on.

Andy headed out with a few friends aiming to link up several peaks in the Wasatch. Two of the guys were in lightweight randonee racing gear, and left Andy and his other friend in the dust. “I was blown away because I was used to holding my own,” Andy says. The brothers realized no amount of physical conditioning could make up for their clunky, heavy gear that made every outing an exhausting “mini expedition,” compared to their friend’s uber light racing gear. After one day of borrowing a pair of Dynafit ST7s with speed bindings, mohair skins and Scarpa F1 boots, Andy’s eyes were wide open. He bought his friend’s used gear the next day and “fast and light” has been the motto ever since.

For as competitive as the brothers are, though, the deeper motivation for speed and efficiency in the mountains is this simple: the faster you can go, the more terrain you can cover in an afternoon or a weekend. The more peaks you can summit. The more powder you can ski. And the more adventures you can sneak in between shifts at work. Or long weekends.

If you eavesdropped on a dinner with Jason, Andy and their wives, odds are you’d be able to hold your breath until conversation turned to a prospective new mountain objective. “The list is much longer than anything we can ever do. And they’re condition dependent,” Jason says. “I’d probably say we talk about it more than we should. If you asked our wives, they’d say we talk about it constantly. Because we’re both interested in it. We both enjoy dreaming up trips and adding to the tick list.”

Of course, there are bigger, farther objectives on the list—in the Tetons, the Bugaboos and Colorado—and representing the U.S. in the Ski Mountaineering World Championships in Switzerland. But Andy and Jason aren’t just training for the super “big stuff.” They’re constantly dreaming up, and then crushing, big stuff in their own backyard. 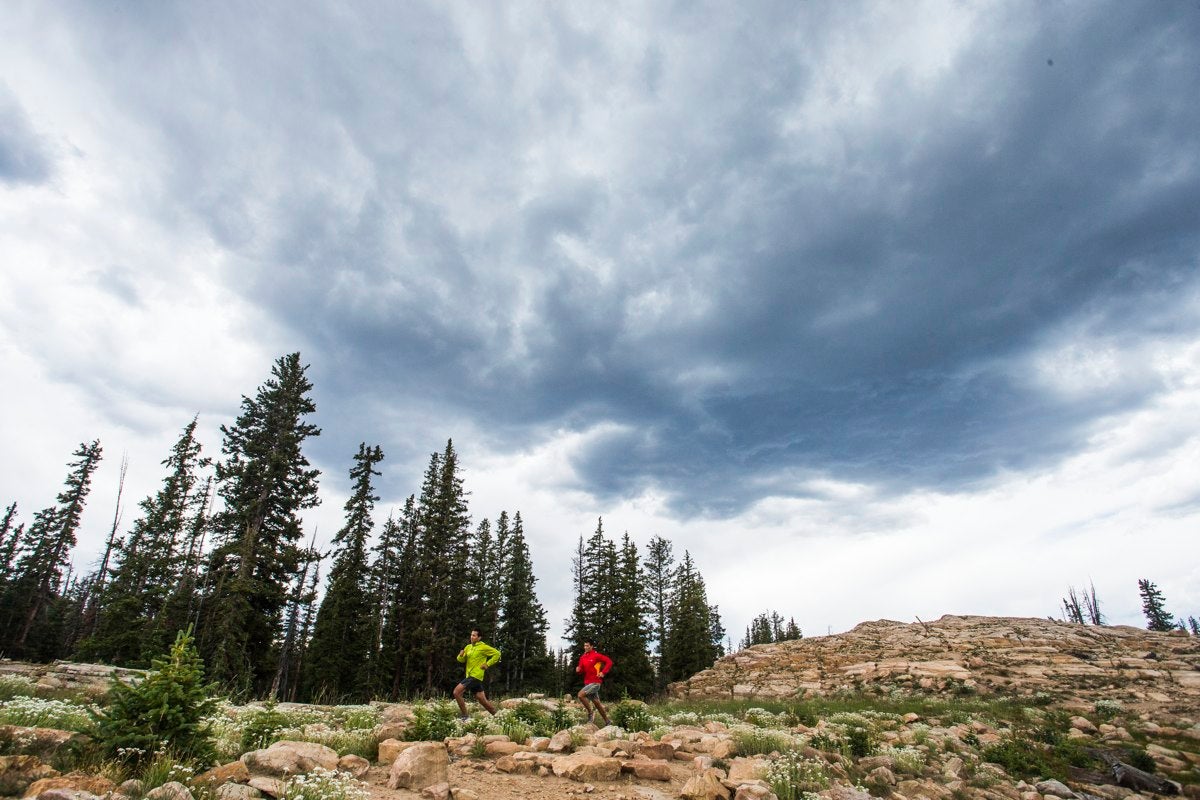 “I think the most meaningful ones are the mountains here in the Wasatch we see all the time,” Jason says. Like one day we were driving down I-15, and it parallels central Wasatch. Andy looked up, and just stopped talking. He said, ‘Dude, we have to traverse all of them.’ They aren’t really meaningful to anyone but us, but it’s kind of our backyard.”

A few months of planning and snow melting later, and Jason and Andy were running and scrambling the entire length of Salt Lake City’s skyline peaks—65 miles and roughly 30,000 feet of elevation gain in 30 hours—when they found they both had two days off from work in a row together.

The brothers are full of these types of stories. Like gazing up at the Oquirrh Range from Salt Lake City and deciding that they needed to traverse it, summiting each of its peaks from south to north—16,000 vertical feet along somewhere between 36 and 40 miles. In a single day. Or linking up eight different ski lines in the Hogum Fork of Little Cottonwood Canyon, skiing more than 14,000 vertical feet and ascending almost 12,000 in under 14 hours. 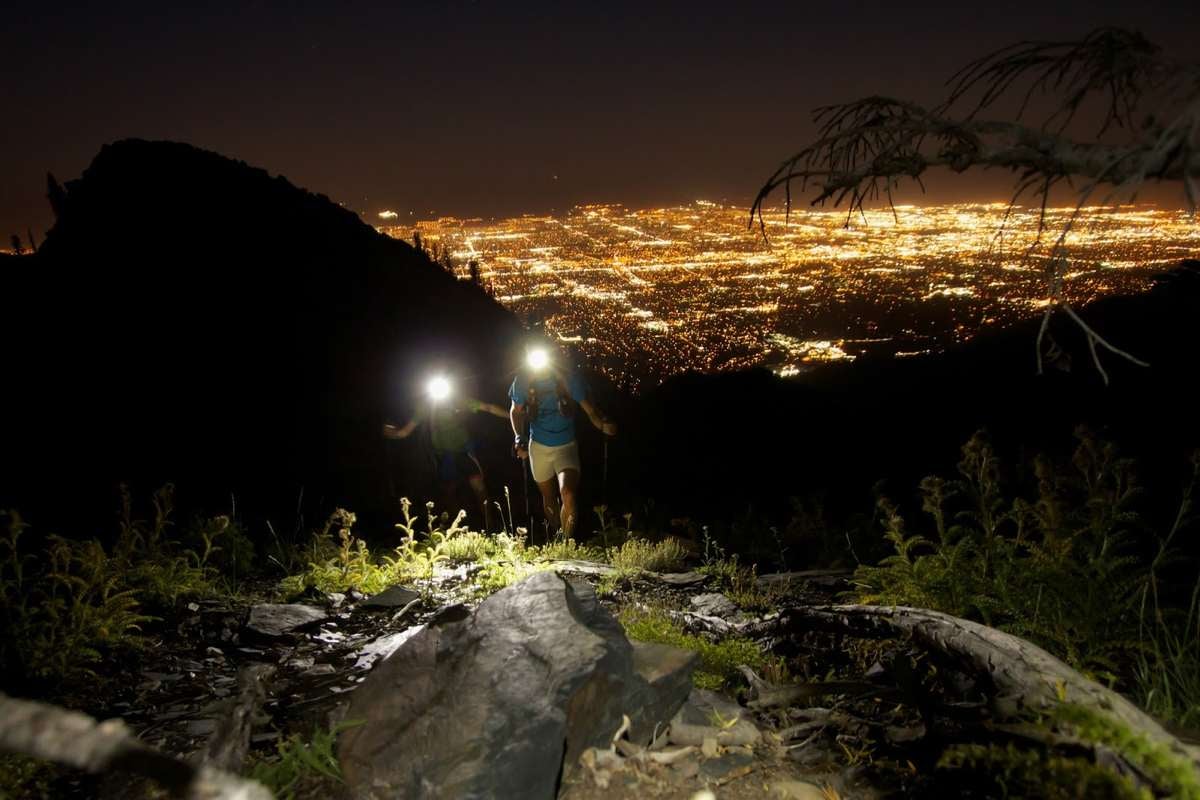 When the Dorais brothers plan a mission, there’s no bailing for hangovers, hitting the snooze button or sleeping in. “I don’t think there’s ever been a day when I said ‘screw it’ and stayed home,” Andy says. “We make a plan, people show.”

Part of their sense of urgency, their psyche for pushing themselves to their limits, simply stems from wanting to pack as much possible into their busy schedules. “I guess most of our friends don’t have both families and traditional work responsibilities,” Andy says. “I just have to plan a little better.” The brothers’ schedule has finally eased up on them a little since finishing their med school residencies and settling into rotations at the same emergency room. “I think we’re not quite as hardcore as we used to be now that our schedule’s a bit better,” Jason says.

“When things get out of balance, something suffers, and something hurts, my patients, or family, or my personal fitness,” Andy says. “When one area goes, they all go. They’re all intertwined.”
For Andy, planning a mission means checking to make sure his wife—also a doctor—isn’t on call, so she can take care of their two children when he has the time off for a mission. For Jason, it means weighing his needs with those of his wife Amanda, who’s been battling advanced-stage colon cancer since December, 2012. 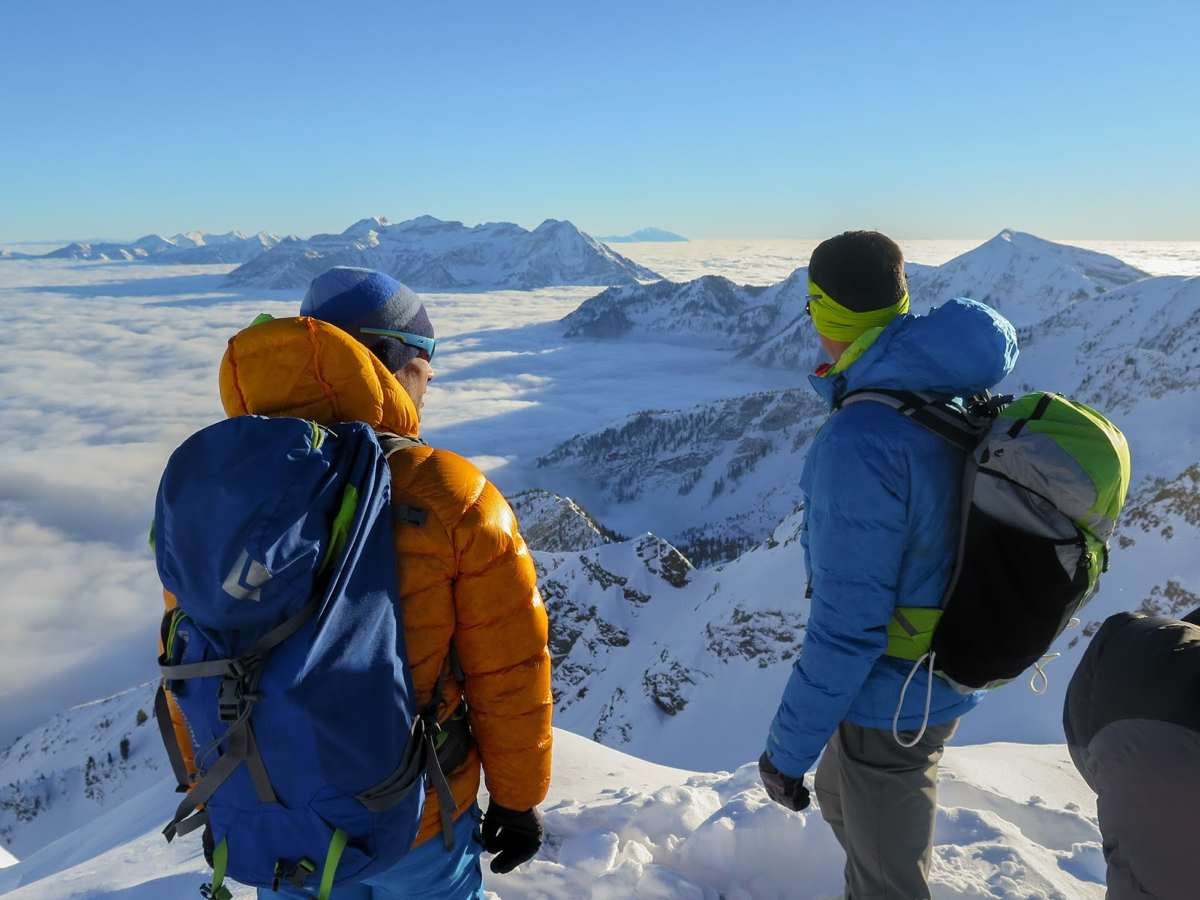 “Anything she needs, every appointment, everything, he’s there and he’ll set his ski plans and personal goals aside to be there for her, to make her feel better,” Andy says. “Actually, two years ago, he made the U.S. skimo team to go to France for worlds. I was the alternate, the first one out. And she was getting sick, so he just said, Screw it, I’m not going. And that was his biggest goal for the year. And he stayed home with her. So I went ant represented both of them instead. He does it with no question—this is what I’m going to do, and that’s life, and he’s super happy about it.”

“There is still a struggle for balance,” Jason says. “I certainly love spending time with her, and any time you’re away, there’s a feeling of being a little selfish. But she doesn’t want me to stick around at home if I’m not doing what I want to do.”

Qualifying in January for the ski mountaineering world championships in Switzerland meant Jason could bring Amanda along to Europe for a week—which might just be the perfect balance.