The Dirtbag's Guide To Stonewashing Your Jeans

I’m the kind of dirtbag climber who usually only has one pair of jeans. The Outdoor Research Goldrush Jeans, well, I’ve worn them for everything—from first ascents to first dates. But mostly first ascents. I don’t know how most companies stonewash their jeans, but I’ve discovered a way to give them that perfectly worn, soft light indigo look.

For this method, I wore the jeans for approximately one year, and spent 100 days of that year climbing in Indian Creek. This particular shade of stonewash required putting up 30 new routes. Here’s how I did it.

Step 1: Break in the jeans: splitter dihedral
The first new route these pants saw was on a new area called the Dove Creek Wall, right across from the Optimator Wall—a shady nook with a handful of routes. This splitter line, called The Mustache Lady, is a 5.12 dihedral just over an inch wide, which demands strenuous finger jams and creative stemming. I scraped my way up it one day, and finally clipped the chains victoriously. But the jeans were just getting broken in.

Soon the crew moved our attention to another wall—the Cave Wall—which we’re still developing, so you’ll have to buy me a beer to find out where it is. This was virgin territory, a prize, a moment in time, a whatever.

Step 2: The pre-stonewash: dirty handcrack
The dirtiest line we dubbed “Ol Dirty Bastard’ or ODB after the famously outrageous rapper from the Wu Tang Clan. This climb, a perfect hand crack dihedral, had to be unearthed like an archeological treasure. At one section we had to take a crow bar to remove the dense dirt from the crack. At this point the jeans were getting “pre-stonewashed” with all the debris falling out of the crack, onto my pants. 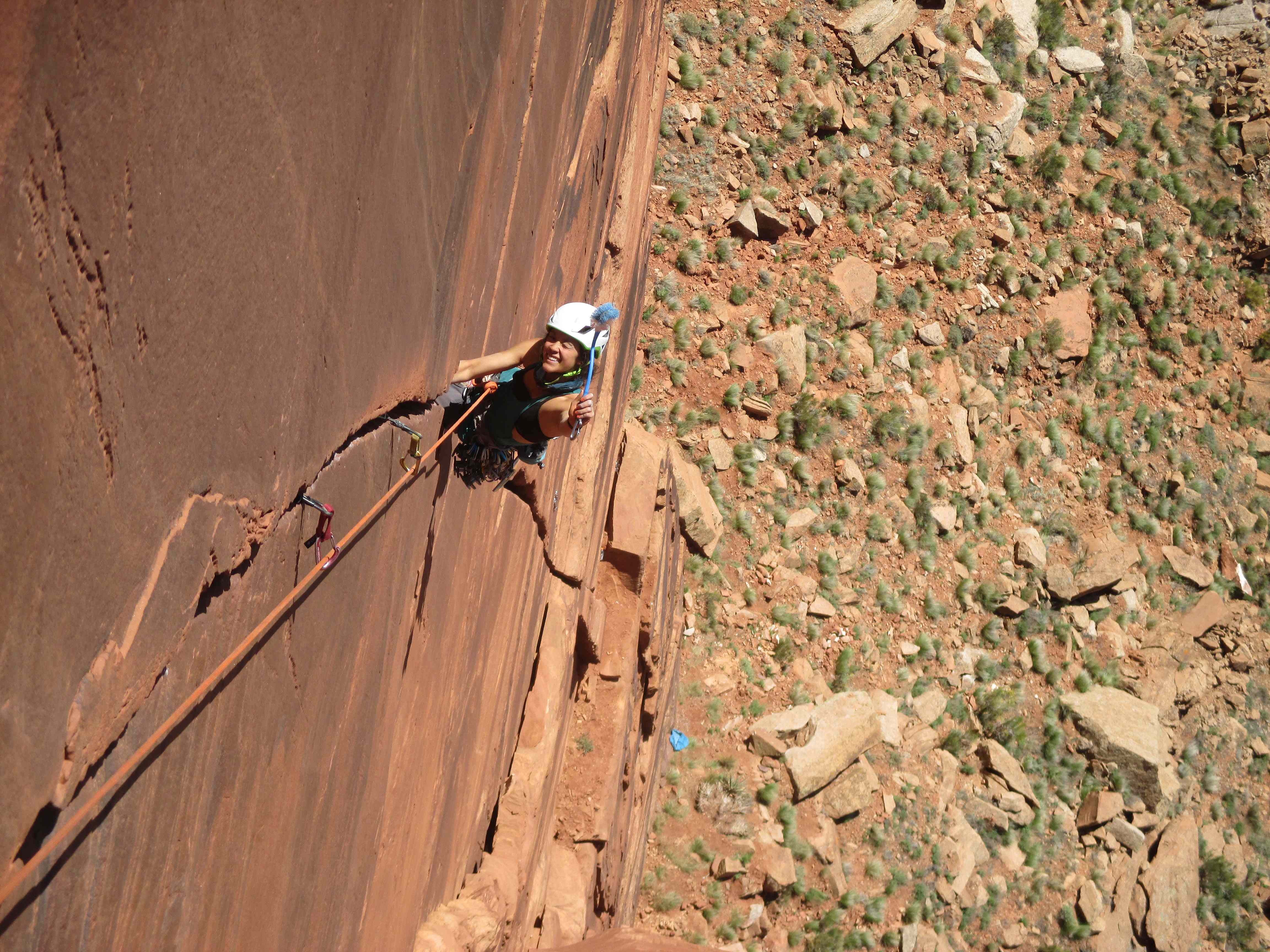 Step 3: Actual stonewashing: four-pitch route
Soon we found something that rarely is discovered in The Creek: a line that goes all the way up the cliff. In 17 years of climbing at Indian Creek I’d never topped out a wall, something I felt was missing from my experience. After all, back in the day that was the sole reason for climbing the cracks out there, to take it to the summit.

This is the climb that really perfected the Goldrush Jeans’ stonewashed look. The drilling started it off; once you drill a half-inch hole in sandstone, you’re literally covered in rock dust. I like it, in a weird way; it kind of makes me feel like a man. I’m not a very manly man—I can’t build houses, fix things, or work on cars, but dammit I can drill a hole in a rock! So there I am, drilling anchors on this beautiful 400-foot crack line with sandstone dust caking my jeans. Feeling like a man.

Midway through developing this route, Phife Dawg from a favorite hip-hop group, A Tribe Called Quest, passed away. So we decided to call the line, A Climb Called Quest, or “The Quest” for short. 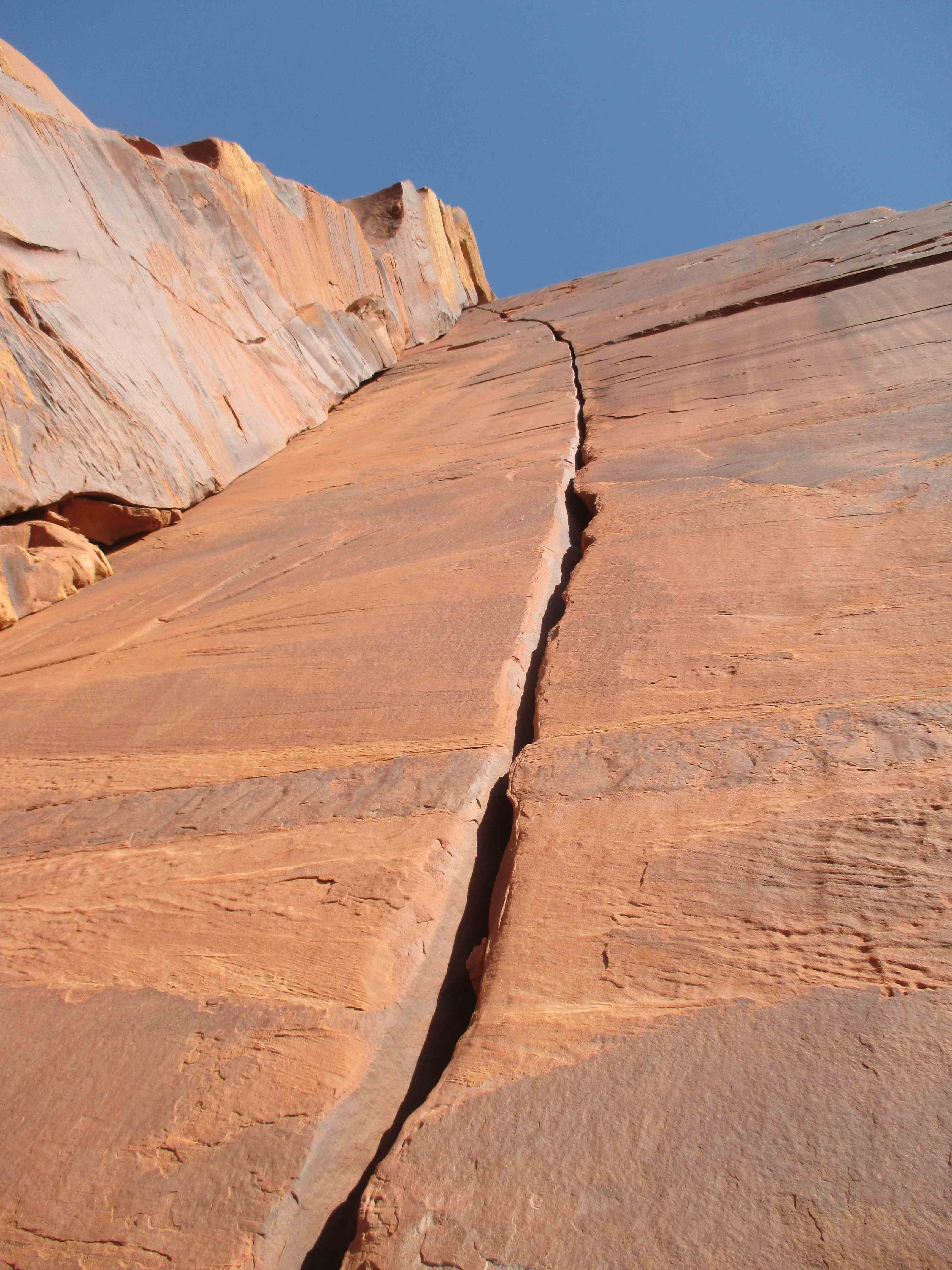 Then we had the brushing. New cracks are dirty. So we armed ourselves with all sorts of brushes, marketed mostly for domestic bathroom use but perfect for cleaning out other sorts of crevices down in the desert. We found out a toilet brush works perfect for hand cracks, and brushes designed for bathtubs work perfect to clean off flat edges layered in dust.

The third pitch of this climb—a soaring and arching steep hand crack—is one of the best in the desert. It’s a pumpy affair with two hundred feet of air beneath you. It has a different feel than any desert hand crack I’ve climbed. It was also, again, very dirty. So I had to stop every five feet to give it a good scrub. New routes always feel like work, so you have to remind yourself of the surroundings every once and a while. On the edge of Canyonlands, Indian Creek is a magical red rock paradise that once used to be the sea. It is a forgiving sort of desert, a healing maroon color that makes me think it represents the heart chakra for all of American climbing.

Once I got up this handcrack on “The Quest” for the first time, I hauled up the drill and got some anchors in, completing another round of stonewashing. After rappelling down, covered in dirt and dust from head to toe, I felt quite blue collar and proud of myself and my partners. A Climb Called Quest goes at 5.11. 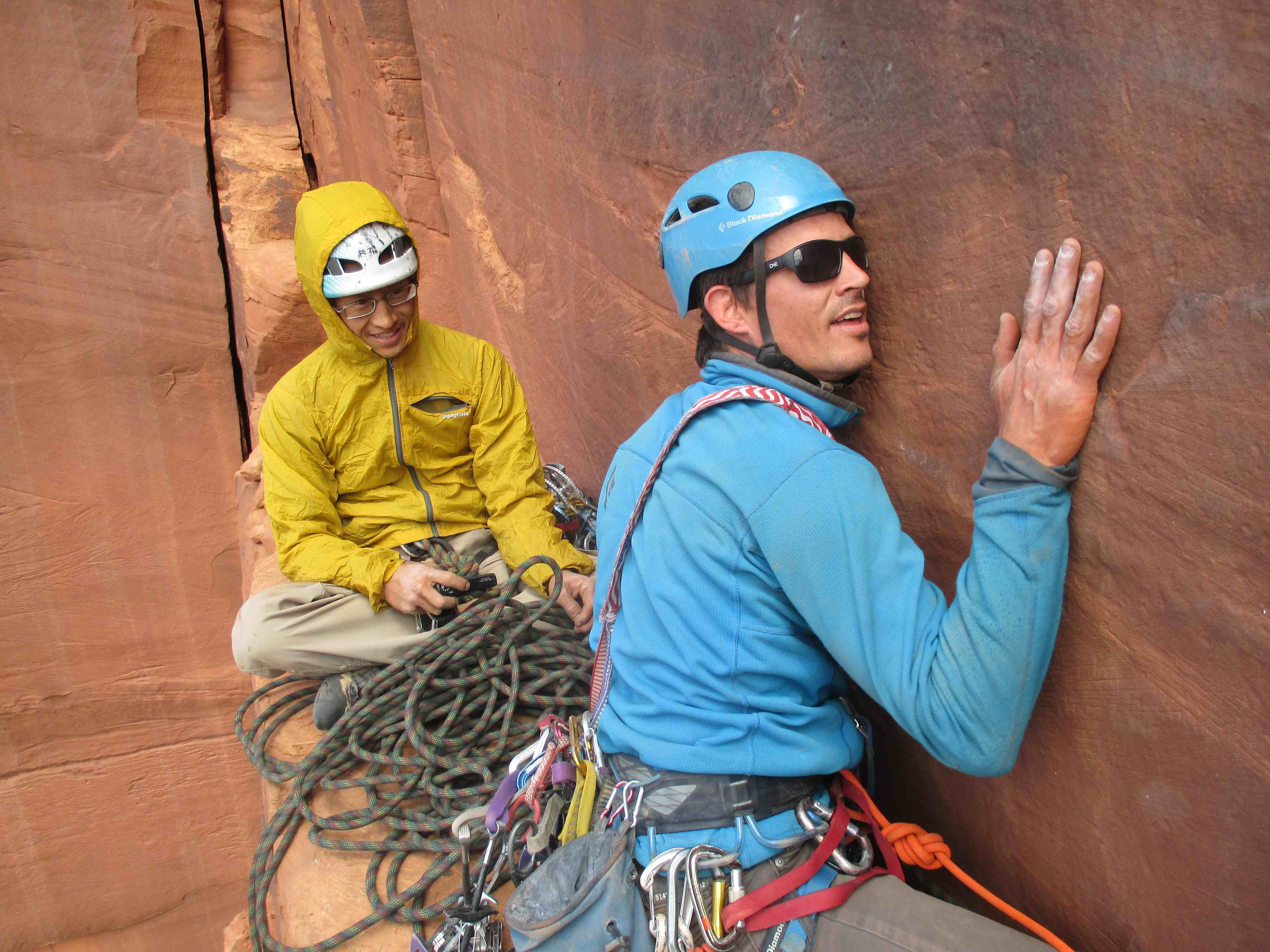 Postscript: Stonewashing Evaluation
One day at the Cave Wall my buddy Badger rolled up sporting a brand new pair of the Goldrush Jeans. I’d been ranting and raving about how good they were, and how they’d lasted for so many first ascents, used and abused by dirt, dust, and scraping up chimneys, so he got a pair for himself. Then we compared the two, his all bright and blue and new, and mine, looking like something a hipster might pay a hundred dollars for. At that point I decided, maybe I need to order a new pair myself. Maybe it’s okay for a dirtbag to have two pairs of jeans.