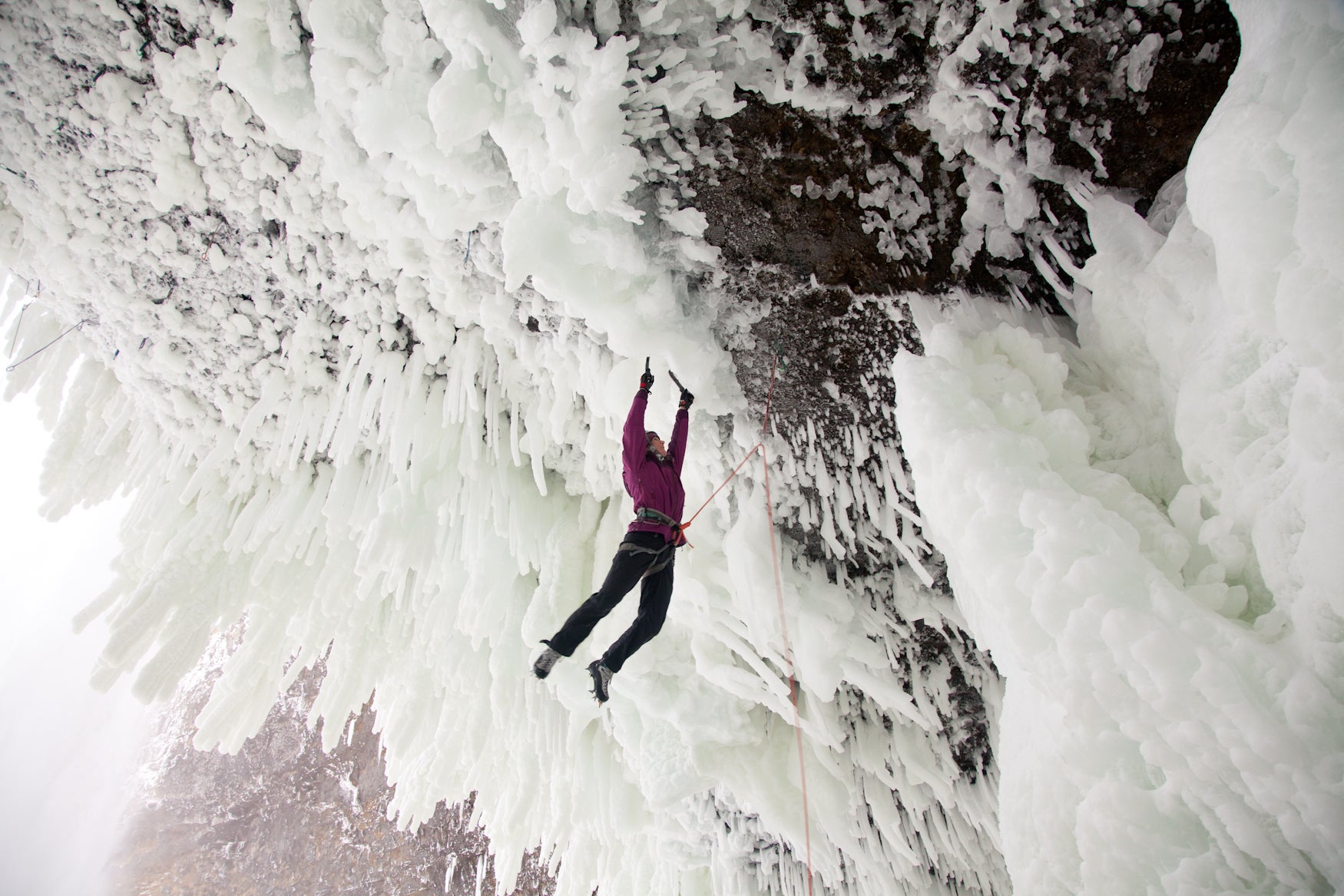 I remember seeing a short video 10 years ago of Will Gadd and Ben Firth climbing a mixed route called Musashi. It was the hardest mixed route in Canada. At the time, I had no intention of following them, but apparently a seed was planted.

I had been sitting at home, wondering if there is an equation to this climbing obsession that had me close to a depressed state. I needed a fix. A new goal to plant its seed in my heart and send me down the path of truly “wanting” again.

The seed is planted: My first spray ice

Last year at Helmcken Falls I experienced my first spray ice, basically thick icicle strands formed on a wall from the spray of a waterfall. I had no idea how to climb upside down, and although it fascinated me, I was also frustrated because of my lack of experience. Deep inside I knew I could be strong enough, but I didn’t have the experience to trust myself. I made it a goal, with my friend John Freeman, to train at home on mixed climbs and the splice to prepare for spray the next year. That was the seed.

In the fall, I started pushing myself at the Playground, a dry-tooling crag near Canmore. I had been there several times before, but always climbed the same easy routes. Mixed climbing had been a fun way to get a good pump when rock season was done. But I had always been scared of it. Tools unexpectedly popping and never knowing what you were actually hanging on to felt foreign and uncomfortable. But my new goal gave me focus and a new reason to get over fears.

My first climb was Swiss Cheese, an M9 or something like that, that involved a bit of upside-down climbing. Thanks to talented and motivated friends like Gord and John, who were doing laps on Swiss Cheese, climbing up and down it as if it were a well-endowed maple tree, I was able to tick this goal off quickly.

The next logical step to cave climbing here in Canmore was Caveman, a famous M10 in Haffner Cave. It involved a bit more technical, upside-down climbing, and was more sustained with a finish that scared me. But John sent and shortly afterward so did I. My seed had sprouted some roots.

Excited from sending Caveman, I started to believe I liked mixed climbing and set my sights on Neolithic, an M11 in the same area that John had moved on to. This climb, however, didn’t just involve straightforward figure-9s and -4s. It involved a huge wingspan move, followed by the feet cutting out and a tricky tool retrieval.

My little seedling of a goal was rapidly shooting skyward.

I felt if I could unlock the mystery of the swing/tool-retrieval move, I could hold on for the send. This turned out to be true one day while climbing with Will Gadd. He was training for the Bozeman Ice Festival and climbed all the routes in the cave that day. Inspired, I held on to the swing and finished Neolithic.

In Bozeman, I was fortunate to have a couple of extra days to climb and test gear with Outdoor Research. We sessioned Northwest Passage, a fun M11 in the Bingo Cave. On the third go, with much help from cheering peers, I held on through the shaky slab finish and clipped the chains.

Coming home from Bozeman, I was still stoked about the potential of climbing spray ice. I ventured to the Cineplex Cave to try Musashi, an M12. This had never my goal. But without even realizing it, my tree had sprouted limbs.

The winter was full of ups and downs. Torn intercostal muscles, work and other personal issues saw the tree that had grown from my seed start to wither and lose leaves, eventually growing some tough bark to withstand exterior forces.

I tried to keep nurturing the goal, going for runs, hanging on the tools, trying to stay positive. When your goal gets this big, your investment and time put in have to match the desire. The tree requires much more then the seed did.

I drove the two hours out to the Cineplex several times this winter. Few people want to try a climb like this, so finding like-minded belayers was no easy task. But part of me knew since my first visit there, that this was possible for me. So I kept watering my struggling tree.

A couple weeks ago, my axes finally hit the ice at the end of Musashi and I fulfilled my goal. A mixture of relief, happiness and anticlimactic realization overcame me. The fear of this exact moment is what almost prevented it from happening. Often the best way for me to finish a goal is to have another one waiting, and thankfully the thought of warm rock was a strong draw.

Fertilizing a new seed: What’s next?

But what do I do now that my tree has bloomed and lost its leaves? Winter is over, mixed climbing is pretty much done, and mentally, so am I. There is sadness in seeing my goal slowly decompose. Somehow I need to take all those branches, leaves, limbs and weathered bark and let it fertilize a new seed, allow the life cycle of my goal to complete itself. So I rake the leaves into a big pile and hope that they feed the soil of a future seed. And the search begins.