The Gluttony of Alpine Climbing 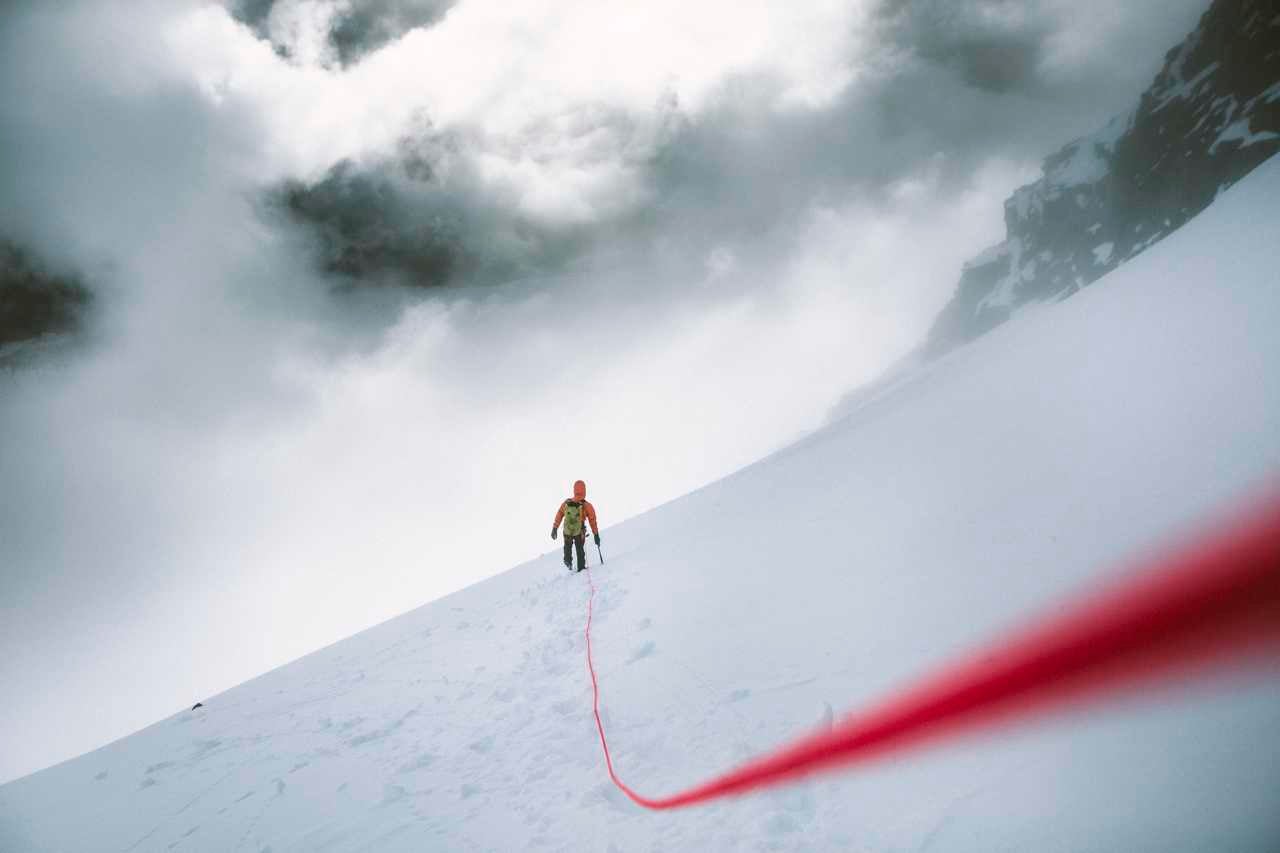 “I want to climb in Alaska.” It was late June in Salt Lake City; we were on a sweaty slog through a scrub-oak hillside, aiming for a tiny limestone crag. Kyle was leaving for Pakistan the very next day, and I had just told him how excited I was for him on his upcoming adventure. “Jewell, what is your next adventure?  What do you want to do?” The pictures and stories from Kyle’s trips to Alaska had always enchanted me. As we reached the base of the choss pile, the summer heat overwhelming us, the stark Alaskan peaks imprinted themselves in my mind. “Alaska, huh? You should go.”

We revisited the subject once ice climbing season was underway in Utah. The winter inversion that chokes the Salt Lake Valley with Beijing-like pollution also creates low-elevation cold temps, which formed ice flows this year that hadn’t been seen in more than 20 years. This was my third season of ice climbing, and I was a woman obsessed. Kyle observed my obsession, and recommended Deprivation on Mt. Hunter as an intro to alpine climbing. Wow, that’s a big ass mountain, I thought when I googled the route. I know there are much bigger mountains, but to me the North Buttress of Mt. Hunter looked huge even in 76kb internet thumbnails. I printed out pictures of the North Buttress and put them where I would see them often. Each time I saw the pictures, a jolt of intimidation would shock me. That intimidation motivated me through many a weight lifting session. This is what I’m training for, I told myself as I deadlifted, picturing Mt. Hunter and trying not to think about my friends having a good time at the pub. The weeks flew by as they always do before a trip, and suddenly we were boarding a plane for Anchorage.

In Anchorage, we bought food for three weeks on the Kahiltna glacier. As we walked into Costco, Kyle explained to me what kind of food we would want to purchase: “Since it’s so cold, and we’ll be burning a lot of calories when we’re climbing, we need to get foods that are high in fats, proteins and sugars. Find the foods that you’d never typically eat because they are so unhealthy.” And suddenly, all of the squats and dead lifts of the last few months made perfect sense. This, I realized, is what I’ve been training for, and promptly loaded the cart with cookies, muffins and candybars. Kyle leaned more toward savory than sweet, and picked up packs of sausages and racks of precooked bacon. We were a good team.

I’m usually pretty conscious about what I put in my body. I know how I feel after a heavy night of drinking, or after eating fried or super-processed foods—it feels like I have no energy to do the things that I really love to do. So I try to eat things that grow, and sometimes eat things that eat things that grow. Three weeks in Alaska, and I had cast aside my reserved, conscientious eater, unleashing my Inner Glutton. Never have I consumed so much sausage and pastrami. If you could wrap it in bacon, we did, and loved it. We ate spoonfuls of straight peanut butter, until we realized that we could dump our bag of chocolate chips into the peanut butter—and instead ate spoonfuls of that.

I know what you’re thinking: Eww. Occasionally I would also pause and think, The way I’m eating is kind of disgusting. But most often, my thoughts were consumed with the next revelation in gluttony. Hmm.  Cheese wheel and dried fig, wrapped in bacon—it’s gonna be magic.  If you were to take the myriad forms of climbing and label one of them ‘gluttonous,’ alpine climbing could be it. For months, you painstakingly prepare and focus, all for a 24-48 hour time frame into which you cram so much climbing that you swear to yourself that you’ll never do something like this again, you’re going to take up knitting or haiku-writing, anything but more climbing. Then you get back to base camp, PTFO, eat as many brats as you can, and within a few days you’ve forgotten all about the suffering and feel ready for more. Sounds like a binge and purge case, right? Like the time I ate an entire bag of dried apricots in one sitting. The ensuing bellyache forced me to cancel dinner plans—at Teton Thai, so this was a big bummer. I writhed in pain for several hours as I cursed my complete lack of self-control in the realm of dried fruit. The next week, believe it, I did the exact same thing again.  Dried apricots are just that good.

Climbing is also just that good. A few days after landing on the Kahiltna, we decided it was time to try Deprivation. We skinned up to the base of the North Buttress in the early hours of the morning. It’s still a big ass mountain, I thought to myself as we switched from skis to crampons. But as dawn grew into morning light, my intimidation gave way to simple movement. As we climbed, I experienced the joy of perfect nevé sticks and the anxiety of rotten alpine ice. I shivered in glacial shadows and then peeled off sweaty layers as we climbed in midday sun. I cursed the worst calf-pump of my life, but then speechlessly watched an endless alpine sunset. I kinda like this sport, I thought as we chopped our bivy spot on the summit ridge. We staggered into our tent and I immediately passed out, waking only when morning light had warmed our tent and the craving for coffee grew into a necessity. A dazzling summit ridge lay before us.

“So, what do you think of alpine climbing?” The evening light grew soft as I slowly hobbled into camp, unclipped from my skis and dropped my pack on the ground. I had managed to fall three times skiing down the final suncrusted hill into camp, which was only 300 feet long and 20 degrees steep. It was safe to say that I was exhausted, and my initial reaction to Kyle’s question was to put it off until later—Need. Sleep. Now. But my mind drifted back over the past couple days, to the joy of simulclimbing and the fear I felt on the crux pitches, to the laughter we shared on the summit ridge and the monotony of some 30 rappels we’d made back down the face. “I love it. I love it all,” I said as I grabbed a bar of dark chocolate and stumbled toward the tent. Give me one good rest day and I’ll be ready for more.