The Making Of The Important Places 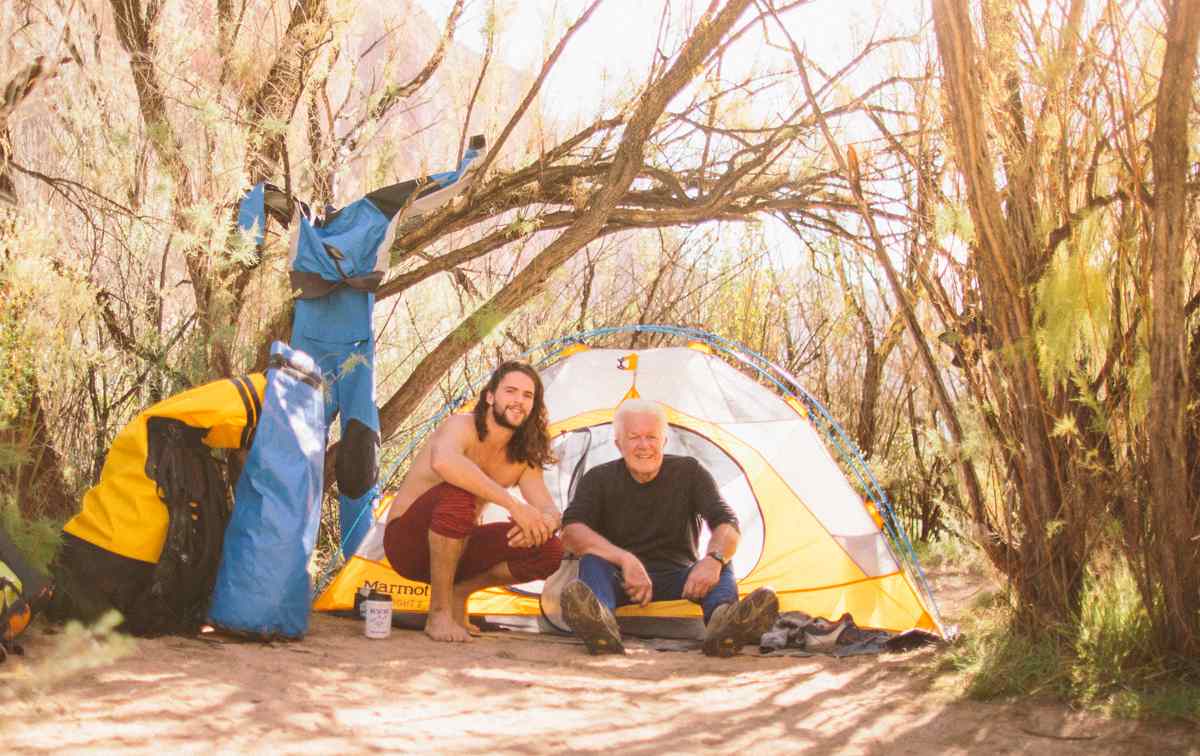 At the top of Hermit Rapid, Grand Canyon Class 8, a wave train with the strongest hydraulics and biggest waves in the canyon, Forest Woodward, 27, handed the oars—the metaphorical keys to the family car—over to his father, Doug, 77. It was a moment of reciprocity, reflected 21 years earlier when Doug had let six-year-old Forest run Nantahala Falls in a kayak, then one of the youngest boaters to attempt it. This time, when son handed the oars to father, the elder Woodward had more than five decades years of whitewater experience—and was reuniting with an old friend, in a way.

When Forest was invited on a 28-day Grand Canyon raft trip in 2013, his first thought was to invite Doug. His vision was a reunion for his father with one of his favorite things: the Colorado River. Doug was something of a whitewater legend, doing first descents of rivers in the Southeast U.S. in the 1950s and 60s, building his own kayaks since the 60s, even appearing as a stunt canoe paddler in the 1972 movie Deliverance, filmed on the Chattooga and Tallulah rivers. In 1970, he had taken a group of Explorer Scouts from Maryland down the Grand Canyon on a guided trip, paddling his home-built fiberglass kayak alongside the group’s rafts. 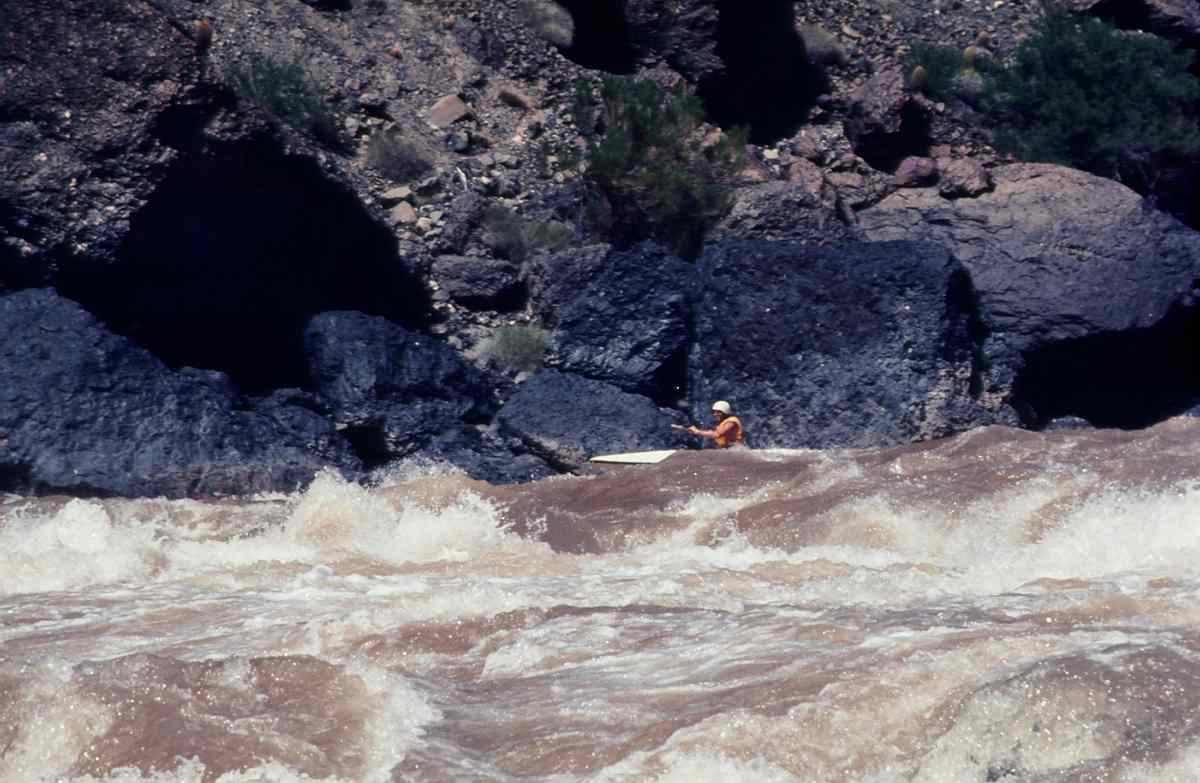 Doug and Forest were respectively the youngest and oldest members of a 15-person group, with six rafts and four kayaks. The two of them would captain a boat on the 280-mile trip through all the Colorado’s famous big-water rapids. When Forest asked him, Doug says, “I had no hesitation whatsoever. I said, ‘I sure would.’ The canyon was still vivid in my mind.”

As the trip started to come together, Forest had another thought: That there might be a story there, if he could align photos and film from Doug’s 1970 trip with the 2013 father-and-son trip. He wasn’t quite sure what, but he brought everything he thought he needed to record the four weeks on the river.

The group put in at Lee’s Ferry on November 12, the low-latitude late-fall sun washing the canyon walls golden. The limited daylight and cool temperatures meant short days on the river, and everyone in the group wearing drysuits to stay warm in the 45-degree water, but also meant campfires every night, and plenty of quiet time under the river of stars running overhead between the canyon walls on clear evenings. 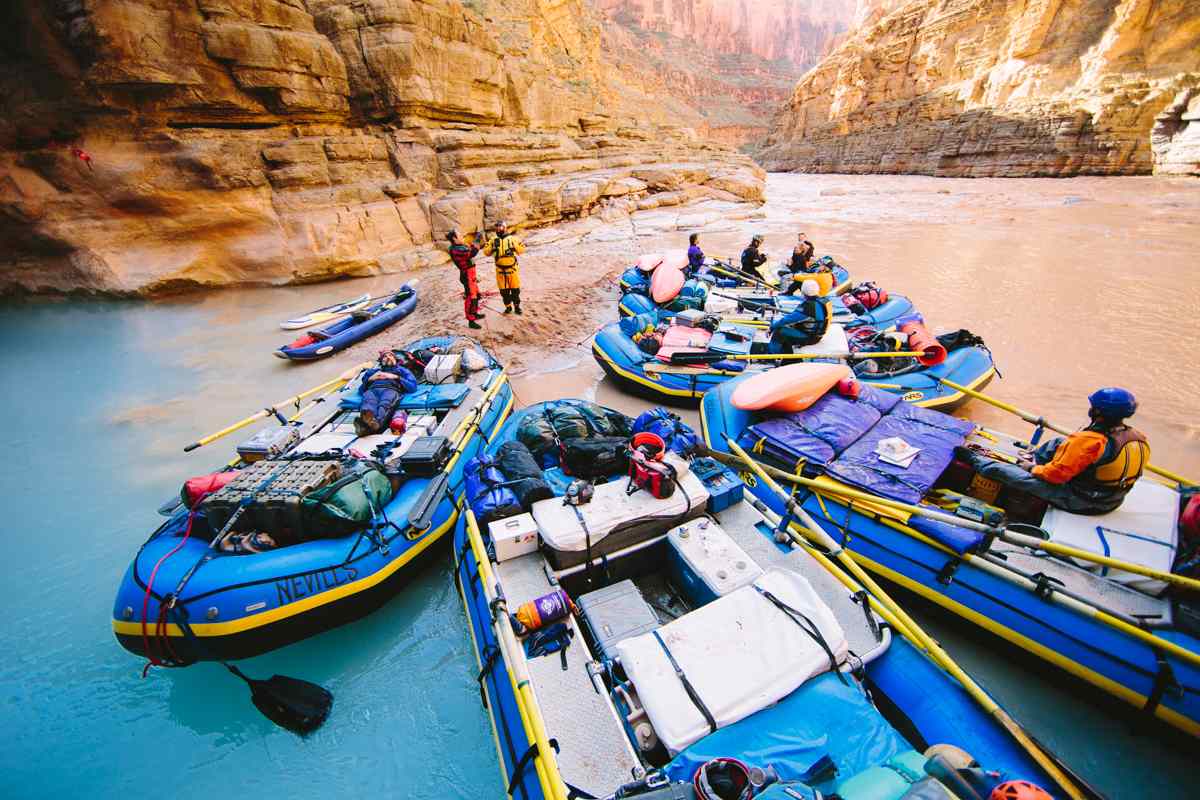 Forest and Doug took turns at the oars, Forest rowing most of the biggest rapids—Horn Creek, Granite, Crystal, Lava Falls—and filming Doug, sometimes standing at the front or the back of the boat through rapids, a towel wrapped around his camera. Doug giddily piloted the raft over the wave train in Hermit Rapid, proving that he hadn’t lost a step in 43 years. He was back in his element behind the oars on a big river, always calmly and methodically easing the fully-loaded 18-foot raft through rapids with ease and minimal oar strokes, as if he were pulling a Cadillac into a parking spot. He chose to walk Lava Falls, the most legendary of all the rapids, so he could shoot photos of the boats flying through the churning hydraulics of the 39-foot drop—not mentioning that in 1970, he pioneered what was then the first kayak descent of the “heavy” side of Lava.

In the evenings, the Woodwards wrote in their respective journals, Forest’s a collage of Instax photos, pieces cut from the river map, and stories from the day. Around the campfire, Doug shared with the group stories from books about Grand Canyon river running, or poems he’d memorized. On Thanksgiving Day, the first family Thanksgiving they’d missed in years, they used a satellite phone to call home and catch up with the family back in North Carolina. 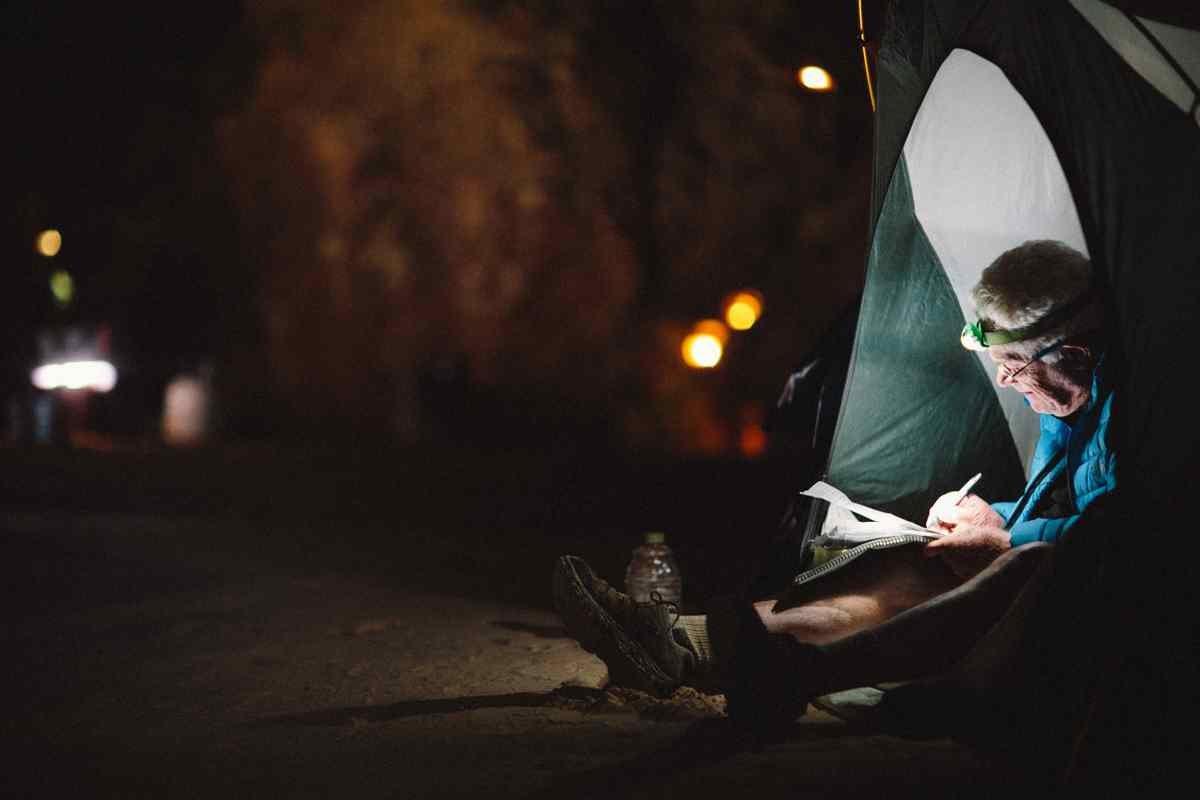 The group survived the trip in style, with no flipped boats, only two swimmers (Specter and Upset rapids), one mild concussion (Sapphire Rapid), one separated shoulder (Horn Creek Rapid), one camp chair casualty (Wizard Staff Night), not a single argument, and dozens of stories.

Back home in his Brooklyn apartment, Forest had something: Photos for a magazine story in Canoe & Kayak, video footage he thought might be decent, audio he wasn’t sure about, and a two-inch thick trip journal with pieces of river map and Instax photos glued into its pages. 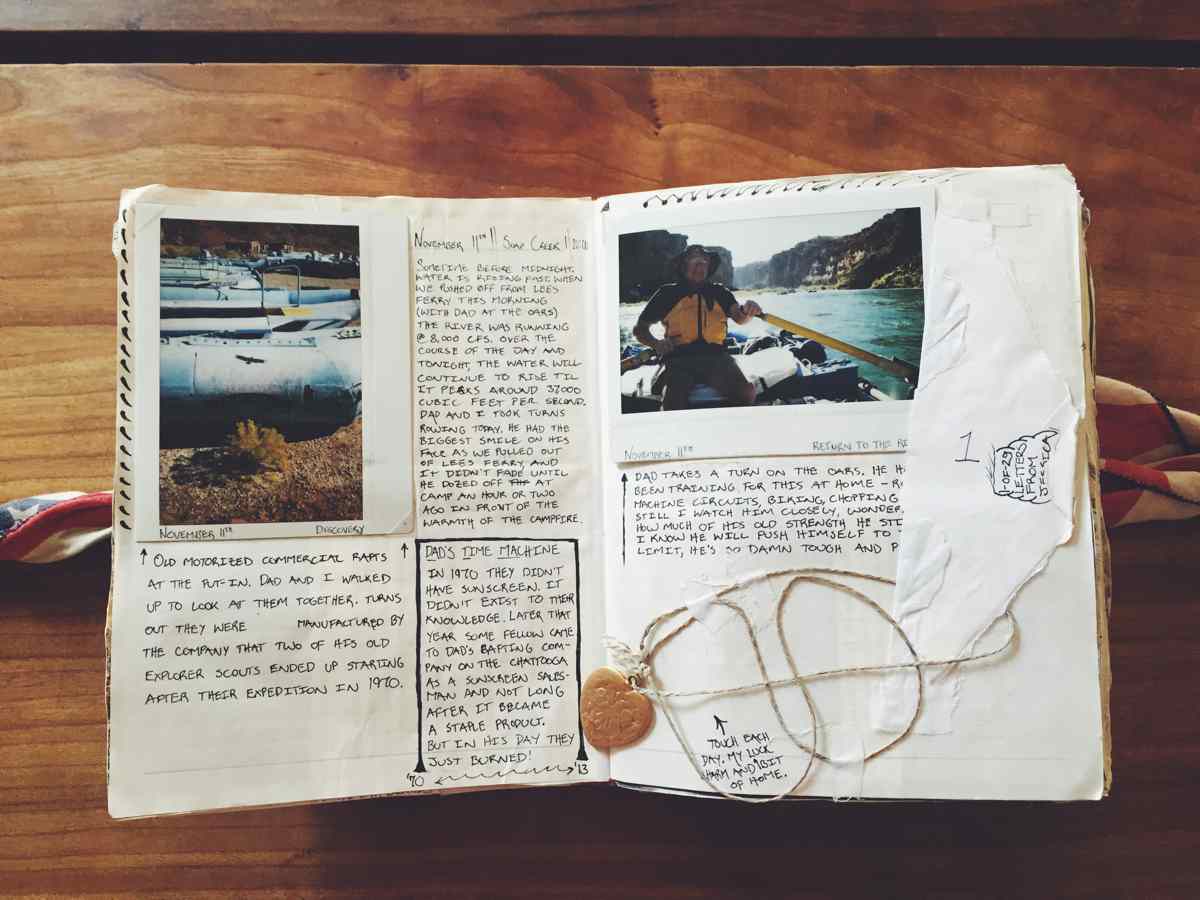 "I had the hope of creating a short film,” he says, “but the more realistic expectation that at the least I would have a record of the trip to share with the family, and maybe with my kids somewhere down the line—much like dad shared his trip down the river in 1970 with us kids growing up."

The idea sat for a few months, and Forest talked with friends about something, a web story, maybe, incorporating some video and photos. Maybe something in time for Father’s Day. The footage sat on a hard drive, other projects coming up. Winter and Spring came and went, and the Friday before Father’s Day 2014, a friend introduced Forest to people at American Rivers, a nonprofit dedicated to protecting and restoring rivers—and currently looking for ways to tell good stories about rivers. They had heard about Forest and Doug’s father-son trip and were interested in helping him make a film.

Forest digitized and watched Doug’s old footage, interviewed Doug again at the family’s North Carolina home, and started to shape the story. He went back to a poem Doug had written, a couple days after Forest was born in 1986, the same as he had done for Forest’s brothers and sisters. The poem read:

The Important Places
Child of mine, come
As you grow in youth
you will learn
The secret places...
The cave behind the waterfall,
The arms of the oak
that hold you high,
The stars so near
on a desert ledge
...the important places.
And, as with age you choose
your own way
Among the many faces
of a busy world
May you always remember
the path that leads back
...to the important places.

As Forest put together the script for a short film, the poem became central to the storyline. Doug had written poems for all Forest’s brothers and sisters just after they were each born, but The Important Places was the only one that had been a sort of fatherly premonition.

“I don’t remember having a conscious vision of his life, but I certainly had the feeling that for some reason, that he could go to places where there was just a lot of busyness,” Doug says. “There’s cities, and even a corporate world... We exposed him to a lot of places we loved, wild places. I guess it was just those feelings that came into my mind as I wrote words about him.”

When he turned 18, Forest had left the family’s home outside tiny Franklin, North Carolina, to attend the University of North Carolina, and then the University of Sevilla in Spain, eventually landing in Brooklyn, the complete opposite of his rural mountain upbringing. He made a promise to himself that he’d continue to seek out wild places even while living in New York City, and partly through invitations to go on climbing trips with Outdoor Research athletes Blake Herrington and Graham Zimmerman, he was able to keep that promise, establishing himself as an adventure photographer, published in Climbing, Alpinist, Rock & Ice, Surfer, Afar, Outside, and other magazines. 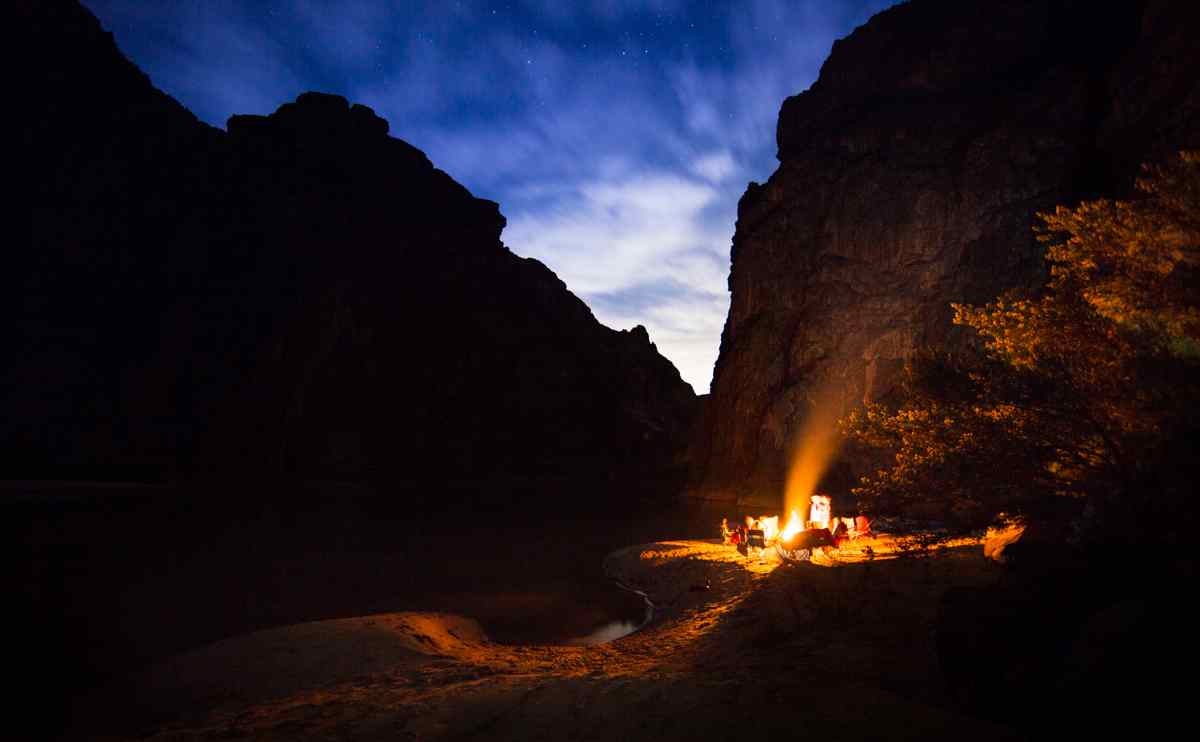 The invitation for the 2013 Grand Canyon trip came from David Marx, a friend, mentor, and instructor at the Rocky Mountain School of Photography, and when Forest started to put together a film, the other photographers who had been on the trip were a boon: Marx’s time-lapses, and aerial video footage from Jeff Scholl (recorded in the brief period before drones were banned in all national parks) worked into the film script and captured the group’s life in the Canyon in ways that weren’t possible or weren’t widely used 43 years earlier, when Doug had first run the river.

Forest recruited his friends Dan Riordan and Dana Saint from Gnarly Bay Productions, known for their passion projects A Story for Tomorrow and Rambo Day, to architect the film. With footage by half a dozen videographers from 1970 and 2013 and 2014, shot around New York, North Carolina, and the Grand Canyon, they chopped footage and shaped the story over several weeks. The Important Places premiered at the 5Point Film Festival in April, where it won the Most Inspiring Award, and was an official selection at Mountainfilm shortly after.

Doug wrote in his 2006 book, Wherever Waters Flow, that 35 years after his first trip, he still thought about the Grand Canyon: “But my heart is in the Canyon still. It beats with the thunder of Horn, Crystal, and Lava; it longs for the stillness of the hidden side canyons.”

He had no idea he’d get to go back, or that his 2013 trip down the Colorado would be the subject of a film, and what turned out to be a very elaborate Father’s Day gift. Even if it was a few months late.

Brendan Leonard helped produce the film The Important Places, and did groover duty for all 28 days of the 2013 Grand Canyon trip with the Woodwards.