The "Ugly" Moments Of Finding Yourself In The Outdoors 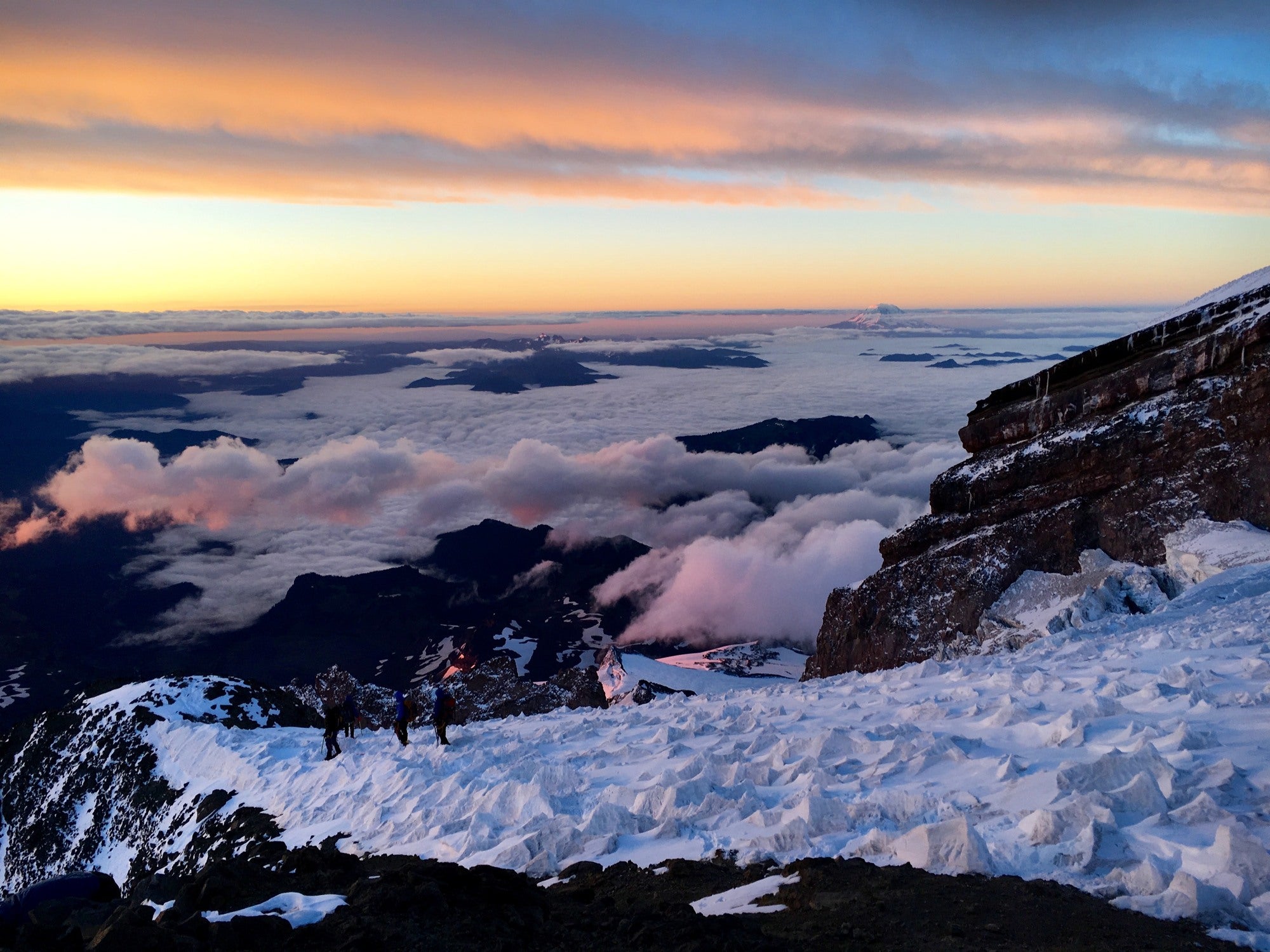 It’s just after 6:30 AM, and I’m about to crest Mount Rainier’s Disappointment Cleaver. We’ve been climbing for about 12 hours—my husband and our friend Daniel and me—except for an hour and a half at Camp Muir, which is where my lips first started tingling. I’ve mentioned it once or twice, but we’re all too cold and tired to care about anyone else’s little aches and pains.

We step off the sastrugi and onto a snug, rocky outcropping overlooking what appears to be the entire Cascade Range. The sun begins to rise, and as it illuminates the slopes above us in perfect pink alpenglow, my husband, Bix—on this, our first wedding anniversary—turns to me and says, romantically:

“Oh, god! What happened to your face?”

I touch my lips, which by now have swollen enough to give me a slight lisp. I guess it looks as bad as it feels.

When I was younger, I always thought there’d come a day when I’d magically feel confident, at home—maybe even attractive—in my own skin. In high school, I had some serious braces on my teeth. Not the cute kind everyone else seemed to have, with the seasonally appropriate rubber band patterns. No, these were a doozy—big, nearly tooth-encapsulating metal numbers with no capacity for red and green bands in December. Paired with a palate expander, they gave me some pretty unusual speech patterns, though my teachers would tell you that didn’t stop me from chatting away in class. As soon as I got my braces off, I was sure, I'd be confident. I’d run for student council; better yet, I’d be elected Homecoming Queen. I’d finally screw up the courage to ask the cute drummer in my friend’s band on a date. Free of the prison in my own mouth, I knew, I’d be a whole new person.

Immediately before my senior pictures were taken, I got my braces off for good—six years, I’d had those babies!—But I didn’t feel any different. I made it through my college years glad to have a metal-free mouth, but that lightning bolt of je ne sais quoi I’d been dreaming of never seemed to hit.

I started spending more intentional time outside, though. I skied regularly with a group of friends. I biked to class, even when I moved off campus and lived nine miles away. I even went rock climbing a few times. By the time I graduated, I felt more at home in the outdoors than anywhere else. And something inside me was changing.

At 21, four days into a three-week backpacking trip, it hit me. No, not a magic moment where I suddenly felt strong and comfortable in my body—but some sort of terrible allergic reaction. To this day, I’m not really sure what happened—but I walked into camp looking like the Stay Puft Marshmallow Man at the end of Ghostbusters. I remember people's faces as they looked at me: They literally recoiled. But, I didn’t care so much. I started that backpacking trip feeling so homesick I cried silently into my sleeping bag each night. Twenty-four days later, I finished it with the knowledge that I could do something that terrified me. My sense of self was beginning to shift. Things like a puffy face didn’t seem like such a big deal. Maybe they were actually part of making me into who I am.

A couple of years later, I watched as a specialist examined my frostnipped fingers and bloated, purple toes. I’d moved to Southcentral Alaska for graduate school, then promptly sustained frostbite on my two big toes on one of my first sojourns into the Alaskan backcountry. Horror registered on my friends’ faces when I took off my socks. And then, last September, as I shiver-bivied at Camp Muir on Mount Rainier, my lips got a little cold. By the time we stood atop of the Disappointment Cleaver at sunrise, they’d swelled up like a bad Botox injection. I looked like a very disheveled Jessica Rabbit—unnatural, anyway, if not particularly sexy. 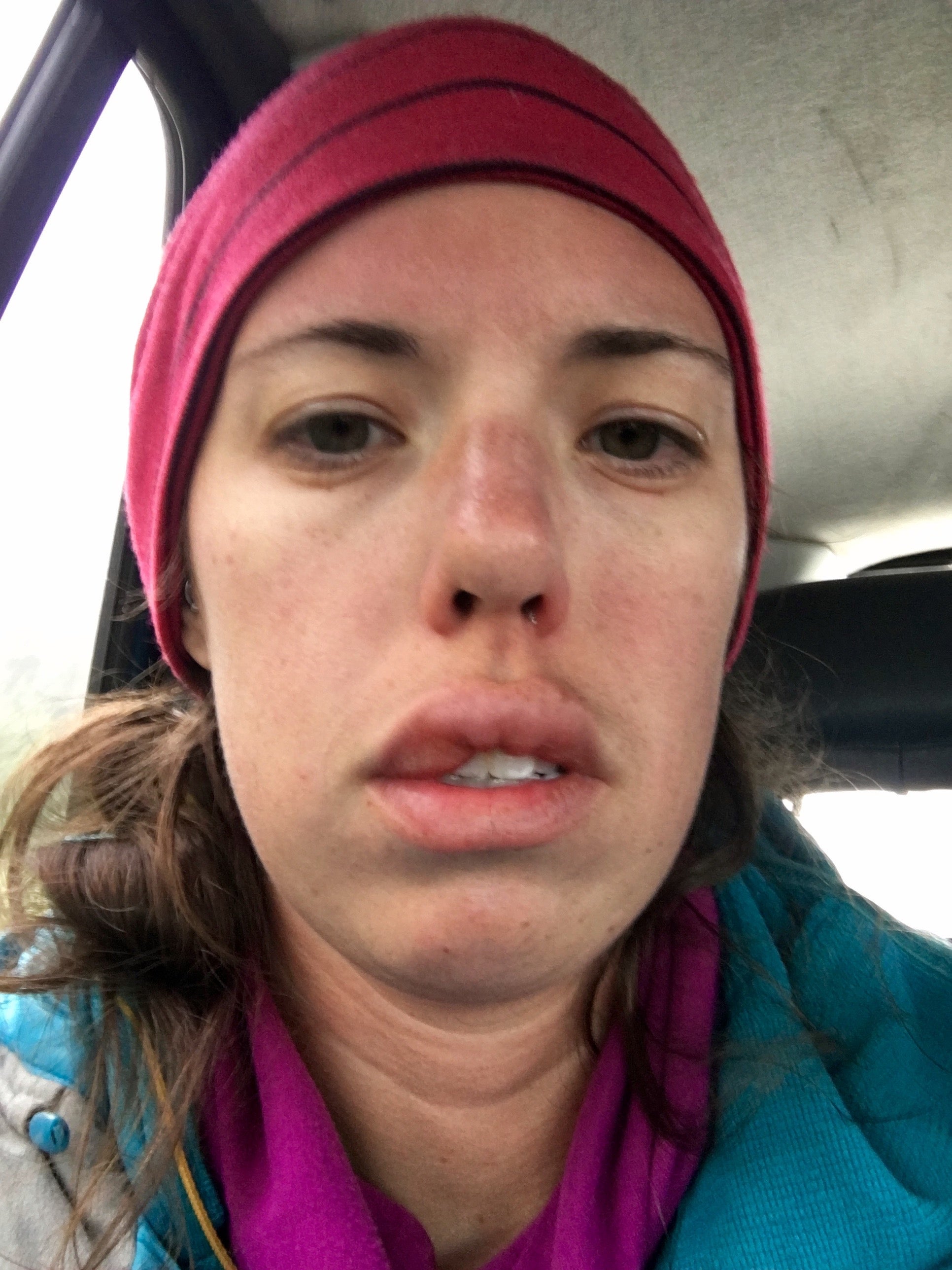 In each of these incidents, I found myself looking decidedly unattractive. Definitely worse than I’d ever looked with my braces. Not, like, I'm not measuring up to the patriarchy's standards of beauty. More like, This person is having a straight-up medical emergency. But after each run-in, something funny happened. Instead of feeling bad about myself, I felt more confident. I had moved to Alaska wondering if I’d ever find my calling; five years later, it turned out I’d probably become one of the toughest people I know. And that changed the way I felt about the way I looked.

As I circulated the Jessica Rabbit picture among my friends and family, it occurred to me that my high school self—who would have been mortified at the time—would be impressed with this woman I've become. Somehow, I’ve become a woman who climbs mountains and gives advice like “Life’s too short to stay at a job you hate” and sends around pictures of myself looking my very worst, which is also when I happen to be at my best.

Ten years out of high school, it’s finally dawning on me: It doesn’t matter if my hair’s matted with sweat as I grind out another set of hills, or if I’m dragging my ass to shore like a drowned rat after an unsuccessful whitewater run. There might be some “ugly” moments—but now? I love them.