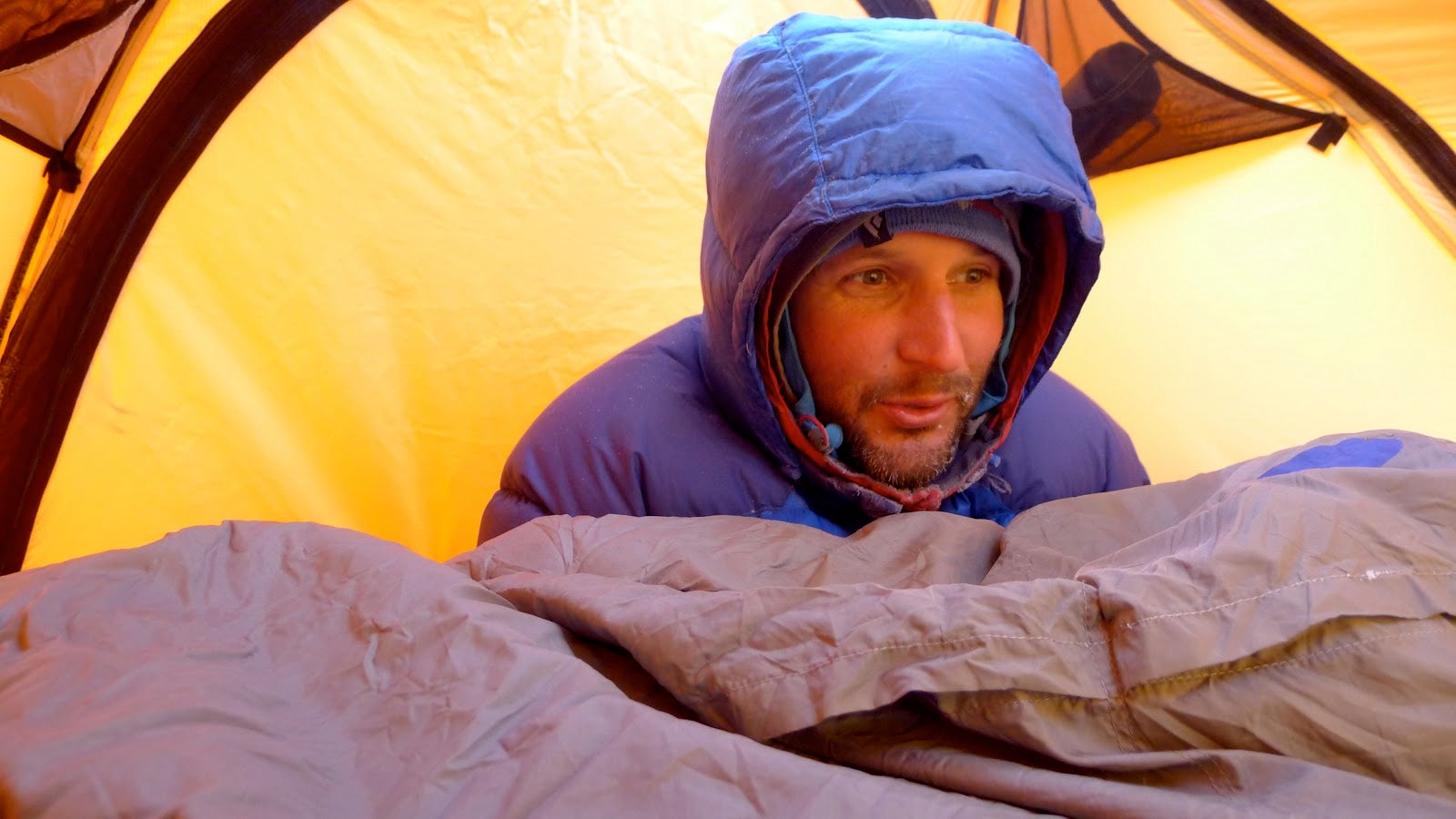 Michael said I was waking up every morning feisty. “I thought you were gonna hit me!”

I remember a quick thrash in my semi-conscious state, followed quickly by a dumping of frost into my little cocoon.

Michael Wejchert, Elliot Gaddy and I were in the Hayes Range, about 100 miles east of Denali. It was early in the season. We wanted to get up an unclimbed south face out there with a very short window for good climbing conditions. Many conversations with “thems that knows,” as some say in our New England home, had us flying out of the spring thaw here and, hopefully, into the beginning of the spring thaw there, around April 1.

We were ahead of the annual onslaught of West Buttress climbers and even a couple of weeks ahead of the annual Ruth Gorge crowd. The Talkeetna Air Taxi bunkhouse wasn’t even open yet, which was awesome because they had us crashing on the floor of their cozy little office right on the airstrip.

The first puddles of the season were on the street in front of the Fairview Inn, a good sign as the sun was just high enough in the sky to be felt. The conversations with locals were about how quickly the snow disappeared with the daylight lasting five minutes longer every day. The forecast was for stable high pressure, and we were psyched.

The flight into the Hayes Range was uneventful and covered incredible terrain I had never seen, well south of the Central Alaska Range. Paul Rodrick dropped us off on what we dubbed the North Fork of the West Fork Glacier late in the morning of April 2, at about 4,500 feet in full sun. This was the last time we saw a thermometer; it was 5 degrees.

Our objective would require a trip up a 5,000-foot face, across a mile and a half of ridgeline, much of it heavily corniced, rappels into a place called the “Frozen Hurricane,” and eventually onto another glacier. To get back to basecamp, we would have to go through a pass that, as far as we could determine, no one had ever been through.

At night it was cold, but as we considered all that was invested in the trip, we began the rationalizations: “It’s definitely below zero at night, but it can’t be worse than 17,000 feet on Denali.”

We quickly determined that a bivy or two (or three, or…) 8,000 feet higher sounded like a horrible idea, but we didn’t have to sort that out yet, because as soon as we had an advanced camp set up and a recon of the pass behind us, it started snowing.

That sounds miserable, but it was actually kind of nice because with the snow came some warmer air. From my journal:

“Warmest night yet, but still sleeping in a -40 bag with a lightweight puffy!”

A phone call to Sarah Garlick back in New Hampshire gave us a good forecast for high pressure, but when I told her how cold it had been, she checked on the upcoming temps. “Oh god,” she said. The day the snow stopped, the temperature dropped as the cloud layer disappeared and the sun emerged. The next morning, I had to warm the white gas with a lighter until it would ignite. The following morning was even colder.

Angry cold. I have never experienced anything like it. We all live in a fairly cold place and are accustomed to hard climbing in very cold weather. Guiding on Mount Washington in winter requires the knowledge of how to avoid frostbite and the ability to do so. This experience was testing me.

“I have found that decisions in the mountains often make themselves. To me, and to both of my partners, we considered getting frostbite to be losing and to be unacceptable. I was clearly up against it when I went down.” April 12, 2013

With one satellite call, we went from an exploratory expedition in a remote corner of the world, to town drunks. Walking over the refrozen puddles, I distinctly remember how happy I was to be able to move my toes, although as I ate my hamburger in the West Rib, I habitually kept my toes moving, as I had done for the eleven days, just to keep the blood flowing. I remember thinking about what an idiot I would have felt like if we had pushed it, and instead of stumbling back from the bar I would have been recuperating in a hospital. I was contented, happy.

That night back in Talkeetna, we learned that when white gas doesn’t ignite, it’s at least 30 below zero. We also learned later that this was the coldest spring in Alaska since 1929, and eventually, that another team just a few valleys over had routinely seen negative 40 on their thermometer.