This "Regular Route" Is Anything But Regular 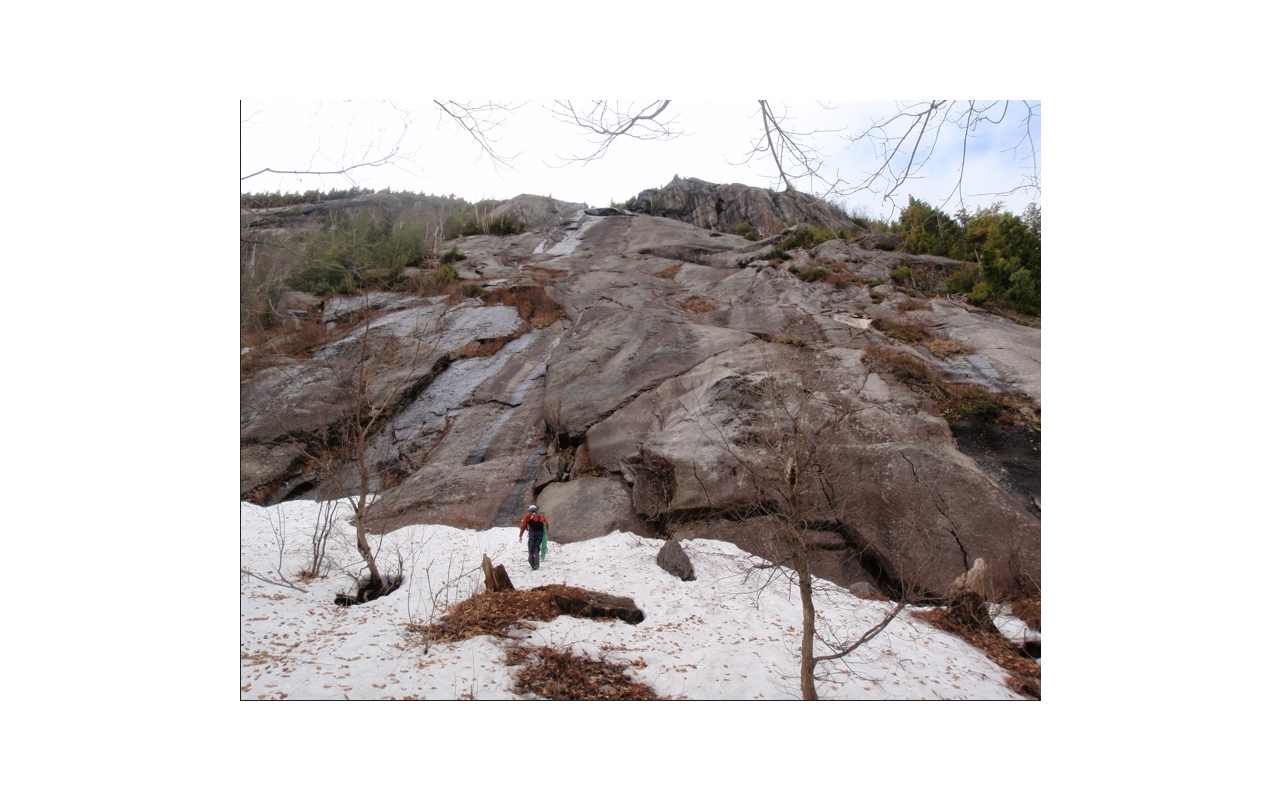 Climbers enjoy coming up with creative and off-beat names for their routes, so it’s rather surprising that there are so many “Regular Routes” in the world. Judging from my extensive research (a word search on Mountain Project), most are in the west: California, New Mexico, Arizona, Utah, Idaho.

A boring name need not mean a boring route, though. The twelve-pitch Regular Route on Fairview Dome in the Sierras is included in Steve Roper and Allen Steck’s Fifty Classic Climbs of North America. In the Adirondacks, we have our own classic Regular Route, though it’s neither as long nor as difficult as Fairview’s (which is rated 5.9). 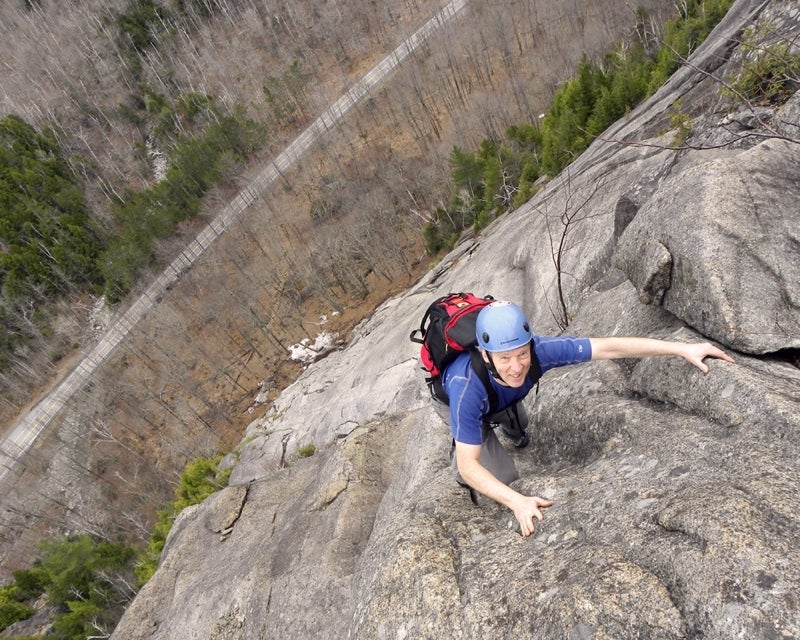 Chapel Pond Slab rises 400 feet above Route 73, a two-lane highway that winds through the mountains between the interstate and Lake Placid, the little village that hosted the 1932 and 1980 Winter Olympics. The slab is one of the most popular climbing crags in the Adirondack Park, in part because it sits right off the road, in part because it boasts several moderate routes of high quality.

Regular Route is the most popular of the popular. It offers a half dozen pitches of varied and interesting climbing, finishing on top of Bob’s Knob, a massive bulge of open rock with impressive views of Chapel Pond and Chapel Pond Pass. The guidebook Adirondack Rock gives Regular Route five stars, its highest rating for the overall quality of a climb. Little is certain about the history of Regular Route. Adirondack Rock says it evolved from variations of an early route called Bob’s Knob Standard. The region’s first climbing guidebook, A Climber’s Guide to the Adirondacks, says it was pioneered by the Alpine Club of Canada.

The books disagree on the difficulty. Adirondack Rock rates it 5.5 on the Yosemite Decimal System scale, whereas A Climber’s Guide rates it 5.3. Given the exposure and verticality of certain sections, I’d go with the 5.5 rating. In any case, the route is considered easy by modern standards. I’ve soloed Regular Route more than twenty times in the past few years, and I have yet to tire of it. I’ll stop at the slab when I happen to be driving past, or I’ll make a special trip after work. On other occasions, I’ll make a day of it, ascending Regular Route along with one of the slab’s other routes, usually Empress, another stellar climb, which was first done by the legendary Fritz Wiessner in 1933. (Empress also is rated 5.5.)

On the first pitch (rated 5.0), Regular Route follows a conspicuous feature near the bottom of the slab—a right rising dike. It’s about a foot wide and maybe forty feet long, with step-like cuts. You scramble up the dike to its end, then follow a left-rising crack to lower-angle rock and look for a place to set up a belay anchor.

On the second pitch (5.4), you friction-climb textured white rock to the start of a low, curving wall. Look for an old piton here. Surmount the wall and ascend a few yards to a level area, setting up a belay next to another old piton.

The third pitch (5.5) is one of the best. Follow the obvious corner to a bulge, mantle onto a comfortable ledge, friction up slab to a narrow sill, and walk left to a short vertical crack that leads to a left-facing corner. Follow the corner and its crack to the Twin Cracks Belay, a sloped ledge below a wall broken by a pair of parallel cracks.

For the fourth pitch (5.5), follow the right crack to its end and then friction upward to the base of a steep wall on Bob’s Knob. Set up a belay in a level area at the bottom of the wall, next to a waist-high blade of rock that makes a good backrest.

I consider the fifth pitch (5.5) the hardest. From the belay ledge, go up the slab left of the wall for ten feet, then step right, onto a small ledge on the side of the wall. Feel around for handholds and step onto the front of the vertical wall. (There is a good finger crack on the left.) Work up and right. In a few moves you reach a huge belay terrace. (It’s also possible to start the pitch by climbing onto lower-angle rock at the base of the wall.)

Unrope and follow the terrace around the corner to an S-shaped crack, the start of the sixth and final pitch (5.2). Follow the S-crack to a good ledge bordered by an eight-foot-high wall split by vertical and horizontal cracks that form a cross. Climb the Jesus Crack (as I call it) to another ledge. From here, it’s a short scramble up slab to the top of Bob’s Knob and its outstanding views.

The last pitch is a relaxing and scenic finish, but the next edition of Adirondack Rock (coming out this year) will include a variation that offers more challenge. It’s amazing to think that a new variation could be found on the most popular route on a slab with eighty years of climbing history. Then again, perhaps it was climbed in the past but not documented.

The variation, called Li’l Sebastian, is rated 5.6. Thus, it’s harder than the standard Regular Route pitches. From the start of the S-crack, walk right on a ledge for thirty feet to another wide cleft. To the right of this cleft, look for a long crack angling up and right across a steep slab.

When I did Li’l Sebastian in April with my friend Kevin “MudRat” MacKenzie, I followed the fist-size crack to its end, continued in the same direction on a narrow ramp for a short distance, and then followed a short left-rising crack to a rappel station (slings on tree) at the top. The Adirondack Rock website promised “great handjams and scenic views of Chapel Pond,” and we were not disappointed.

Li’l Sebastian tops out on a ledge with views of Chapel Pond, Chapel Pond Gully Cliff, Upper Washbowl Cliff, and, in the distance, Whiteface Mountain—a worthy finish to an uncommon climb with a common name.