Torment to Forbidden: Wars, Wilderness, And Discovery On Sept. 11, 2014 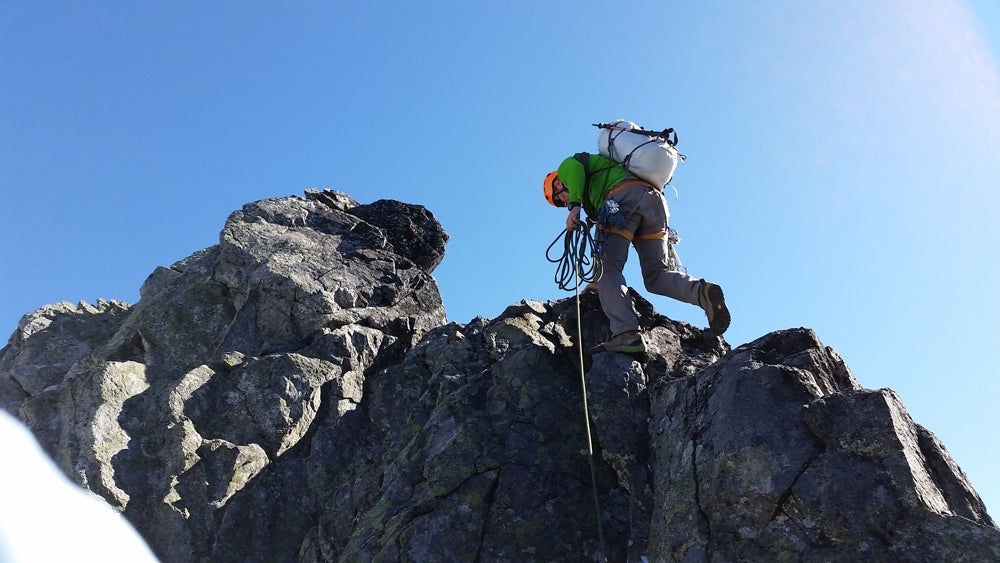 The Sierra Club Military Outdoors 911 Climb has come to honor and recognize many things since its inception. It serves as a remembrance of the events of September 11, 2001, that so radically changed the course of our country. The climb also serves to honor a generation of men and women whose lives were irrecoverably changed in the wars that followed that day. This year, with the 50th anniversary of the Wilderness Act, the climb took on a special meaning as it celebrated the wilderness that a new generation of veterans now explores after their own wars. This same wilderness I first stumbled into in the Cascades in 2008, found its powerful spiritual and mental healing, and decided that I had to fight for something that gave me so much in return.

Personally, alpine climbing and the wilderness have been my escape, my medicine, my adversary, and—most importantly—my victory since leaving the battlefield. The risk, camaraderie,  struggle and accomplishment are how I can replicate my best experiences in battle  and heal my soul as a result. There are no sounds of guns; no one shuns the death eyes.

Enjoy our tale of the Torment-Forbidden Traverse. This post originally appeared on OR non-profit partner Sierra Club's blog. 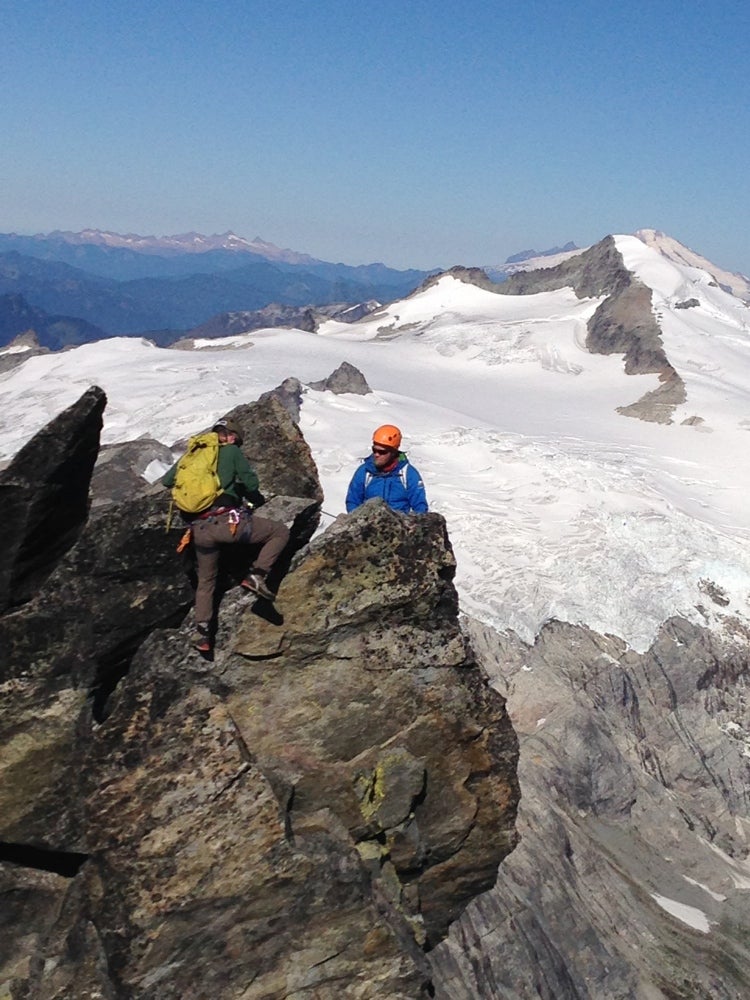 We began our approach on a scratch of a "climbers’ trail” that petered out after 2,000 feet at a blow down of trees. We then fought sliding alder and devils club, lost a hiking pole while taking a few lumps from angry hornets, and managed to get in a great session of land navigation that took me back to breaking brush through "Wait a Minute" vines that seem to grow at every Army post I've been. One of the characteristics of Washington's best wilderness climbs is that the remote approaches are literal bushwhacks through plants designed by nature to trip your feet, pull at your pack, clock you in the face and generally not let you pass.

After a few hours and over 3,000 feet of elevation gain, we broke out onto the glacial moraine and made our way to the edge of the snow field to find a spot at the base of Mt. Torment to bed down for the night. Our initial rocky camp had all of the necessary amenities, such as brain-freezing water (I suffered four) and a great cooking rock. But as the wind was unkind, we moved to the saddle at the edge of the ridgeline found by Kurt's watchful eye. With names like Torment and Forbidden, one would think you’d be terrified with views of Mordor and Barad-dur, yet we were treated to a glorious alpine wilderness sunset and a brilliant midnight moon. The moon was so bright that I rudely cursed at a groggy Mike who I thought was shining his headlamp into the small opening of my sleeping bag. My apologies, Mike. 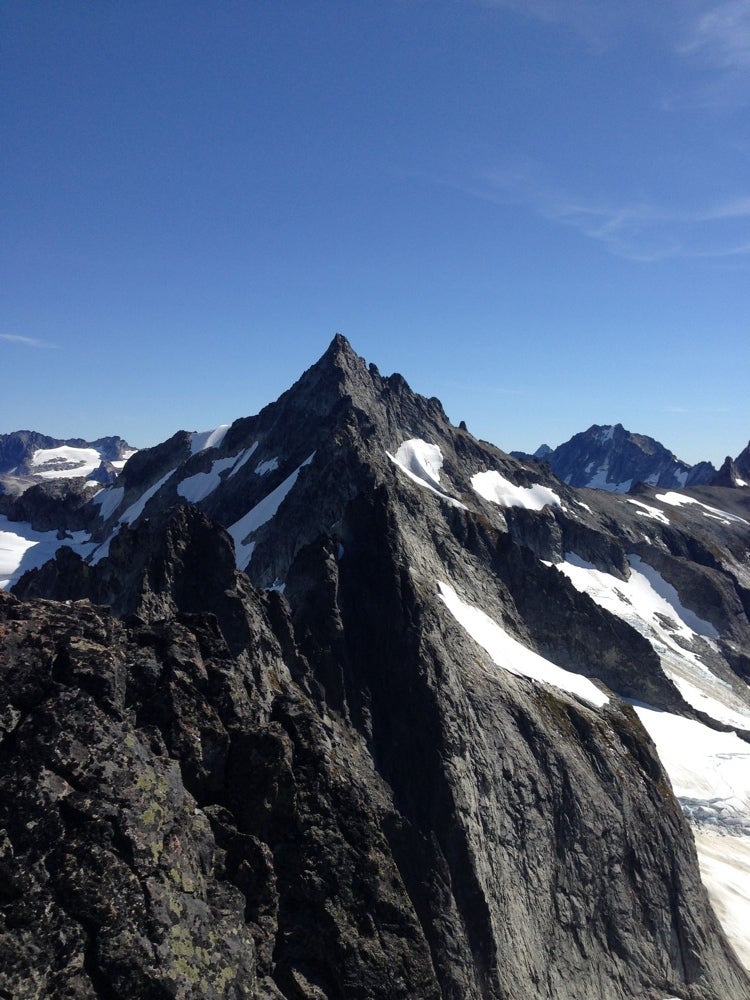 We lazily awoke to predawn light, and instead of going to stand too as I have for years (Roger Standing Order No 15 "Don’t sleep beyond dawn. Dawn’s when the French and Indians attack."), we fought the urge to crawl back into warm bags while scarfing down a breakfast of oatmeal and instant coffee. After a quick movement up a snow field and along the moat (the gap between the mountain and snow decided by nature to make scaling mountain walls more difficult), we began our ascent of Mt. Torment. Not having climbed either Forbidden or Torment before, I was in high spirits to be making our way up and over rock that was far better than its reputation told. I was especially excited for Mike as this was his first Alpine traverse, and it was an awesome sight to see him develop and become proficient at his new craft over the course of the climb. After a brief stop at the summit of Torment (again it was actually quite pleasant despite its name), we threw on our packs and headed out. It dawned on me that we had reached what typically was the climax of a climb first, and that we still faced a long slog ahead. It felt an appropriate way to honor and represent the events of 911 and our personal wars that followed. We traversed a classic ridge in pairs, sending up and rapping down down features with 500-2,000 feet of drop to the glacier on either side. Climb, belay, rappel, repeat for hours. It was wonderful work. 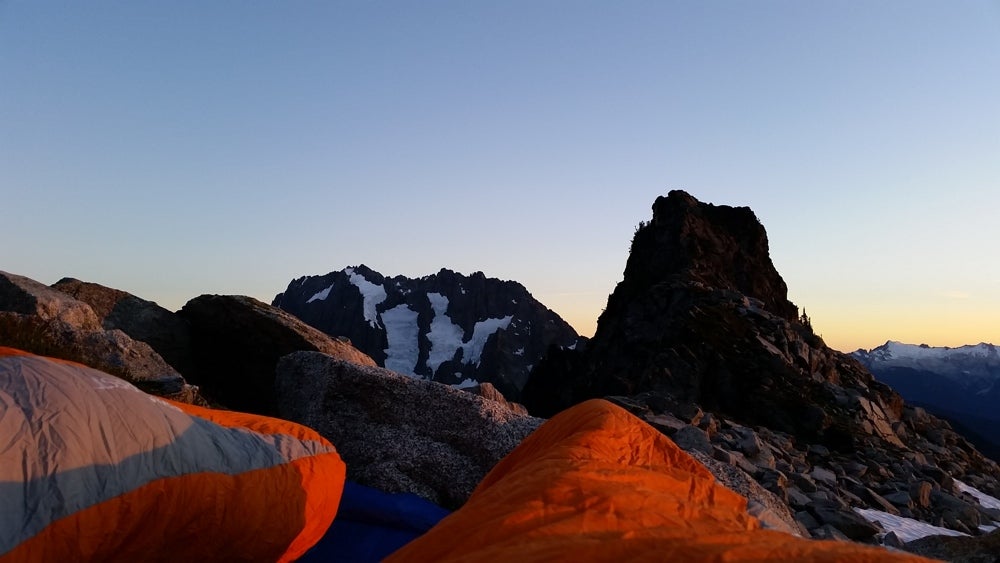 One thing that's thrilling about an alpine traverse is the way you move. Climbing it in pairs made us fast and efficient. While you use protection (tools such as cams, nuts, and belay devices that usually keep you from falling too far) at really hairy or dangerously exposed places, the majority of the time you are hand belaying or wrapping horns while leapfrogging your partner. Its strange how quickly you get comfortable with moving along with thousands of feet of open space on either side. As you and your partner begin to sync, the movement becomes almost elegant in nature, unless you are Mike who accidentally breaks rocks (although rumor has it that I may not be as graceful as I let on). The long drop almost ceases to have meaning as you are swallowed up by its scenery, more concerned with making immediate moves and protecting your partner.

We ended our big day at a series of bivy ledges (bivy is short for bivouac that I believe is French for accidentally having to sleep outside in crappy conditions), where we melted snow, enjoyed a hot meal and had a few interesting conversations while enjoying some of Chris’s alpine elixir. Not believing it was possible, we were treated to an even more incredible sunset and alpenglow on Forbidden and El Dorado Peaks and the Boston Basin. Our slice of alpine home was one of the best places I have spent the night in the world. I had no trouble falling asleep inches away from a several thousand foot drop into the gorgeous glacial valley below. The only real challenge was how to strategically and safely relieve oneself without disturbing your partner or groggily falling to one's death while doing so. 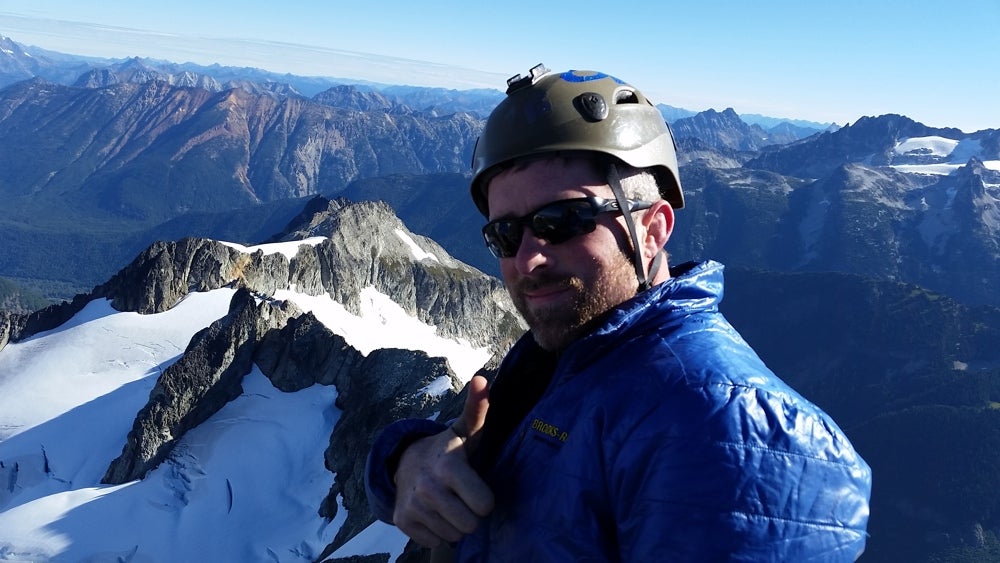 The last day, we powered up the West Ridge of Forbidden. After the previous day's work, the ascent was brilliant and over too quickly, but we were rewarded with a panoramic view of the Cascades including a look back at the route we had traveled. Again, I was struck with the significance of the traverse and its meaning to me as a way to honor the journey of my comrades and I in the years that followed September 11, 2001. 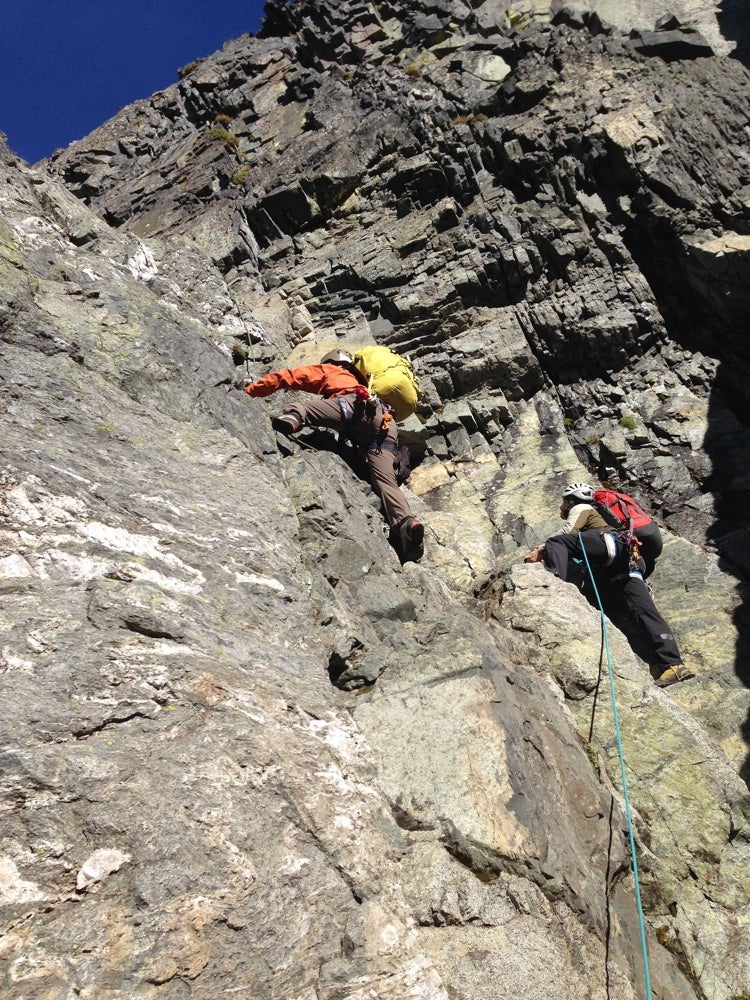 After descending back to our bivy camp, we packed up and began the long walk back to the trail head. We made a series of rappels and some down climbing to the glacier below. Our walk on snow was quick and unremarkable as the hazards were uncommonly minimal this time of year. Sadly, there was not even a bergschrund on this mere remnant of a glacier turned snow field. (Bergschrund is a terrifying German word for mountain tear or crack where the ice and snow pull from the mountain). 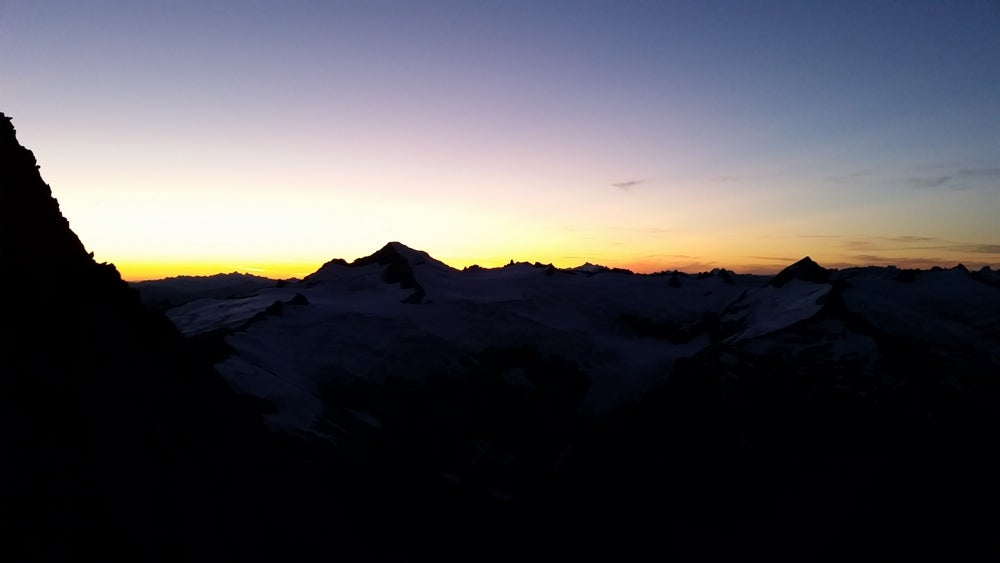 For me, the worse part of the climb is the retreat or walk out. I’d like to attach some mystical significance to it such as "saying goodbye to a wild place or good friends," but in all reality I hate it because the climb is over, I want a cheeseburger and a beer, and time slows to a crawl because I'm bored out of my mind thinking of said cheeseburger and beer. After several hours of crossing gorgeous alpine and subalpine terrain, I was glad our walk was at an end.

Little did we know our worst setback lay on front of us. After getting naked roadside and using a generous portion of cheap body spray to disguise our smell, we made our way back to Marblemount, a gateway to this section of the North Cascades. Much to our horror the BBQ pit we had our sights set on for the last day was closed. Not to be defeated, we found an excellent 80’s-style pizza joint in Concrete off of Highway 20 with good pizza, a Ms. Pacman machine, and the old red plastic fountain drink cups. 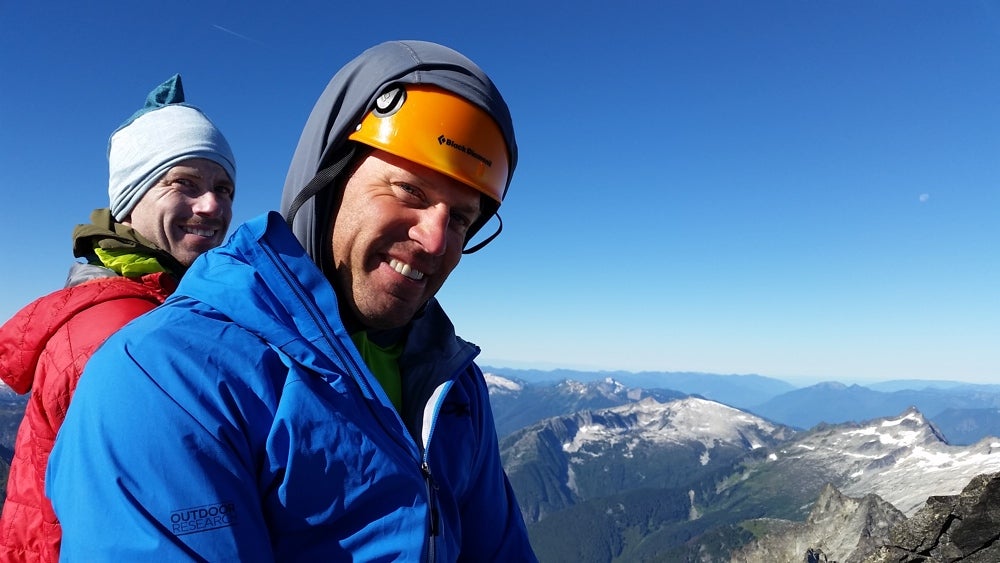 A special thanks to Brian Rafferty and the Project Rebirth Team, Outdoor Research and Suunto for their generous support of our climbers. You made this possible. Thank you Pro Guiding for your professional support for all of our Cascade adventures this summer. Most importantly a thank you Chris, Kurt, and Mike for a climb I won't soon forget.

I'll leave you with this: You, too, can accomplish amazing objectives in the mountains. You can find the silence of the guns, the acceptance of the death eyes. Find your inner strength that drove you in war, train, and get after it. The only roadblock to accomplishing objectives is you.