VIDEO: Putting Up A New Route On Alaska's Mount Deborah 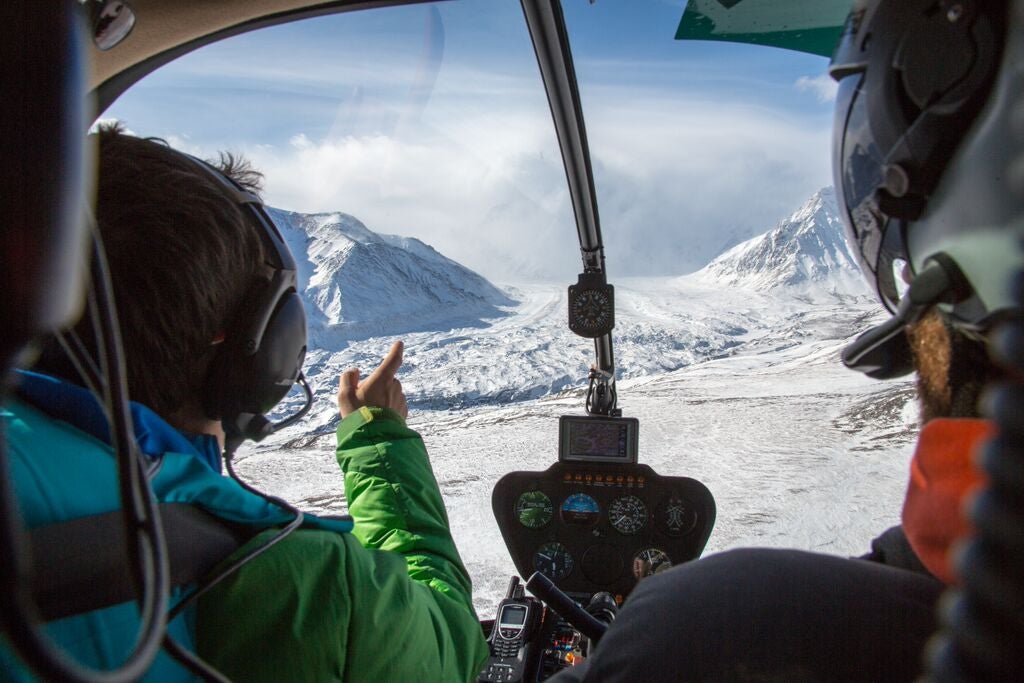 I couldn’t even bring myself to sit up and meet Jon’s gaze as we sat in our bedraggled bivy tent, walls closing in and poles on the verge of snapping. Since being dropped on the upper Gillam Glacier by helicopter 24 hours earlier, the wind had made it clear we weren’t wanted. In the early hours of the morning our base camp tent had been literally crushed, snapping its poles and making us homeless. It now lay under a metre of snow, along with all our food and gear minus our sleeping bags and a few other essentials Jon had managed to grab in a rush. This is desperate, I thought to myself, as I ran through possible scenarios for if our single skin bivy tent was to suffer the same fate. The thought of climbing a mountain was truly well off the radar—we were just trying to survive at basecamp.

Alaska’s Hayes range, located 150 miles northeast of Denali, isn’t exactly designed for climbers. This notoriously windy group of mountains thrust their rotting schist faces into the sky for 2,000 meters of vertical relief. The peaks are clearly seen from Fairbanks to the north—a viewpoint on the grounds of the university in Fairbanks labels mounts Hayes, Hess and Deborah on the skyline 90 miles distant as if they were famous monuments on a city skyline. 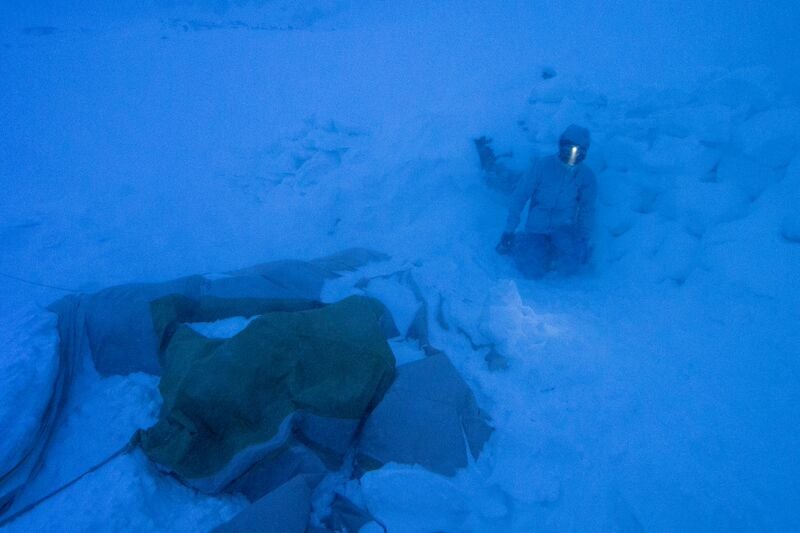 The wildness and isolation of the Hayes is something difficult to find in the popular Central Alaska range, and it was this characteristic which drew Jon Griffith and myself to the towering unclimbed faces on the north side of mount Deborah.

It was four stormy days until we had ourselves established with a footing in the range. Now living in a spacious snow hole we’d spent two days digging, and having excavated all our kit from the destroyed tent, we felt like we were finally in a position to think about climbing, and unbelievably, the forecast was looking good. 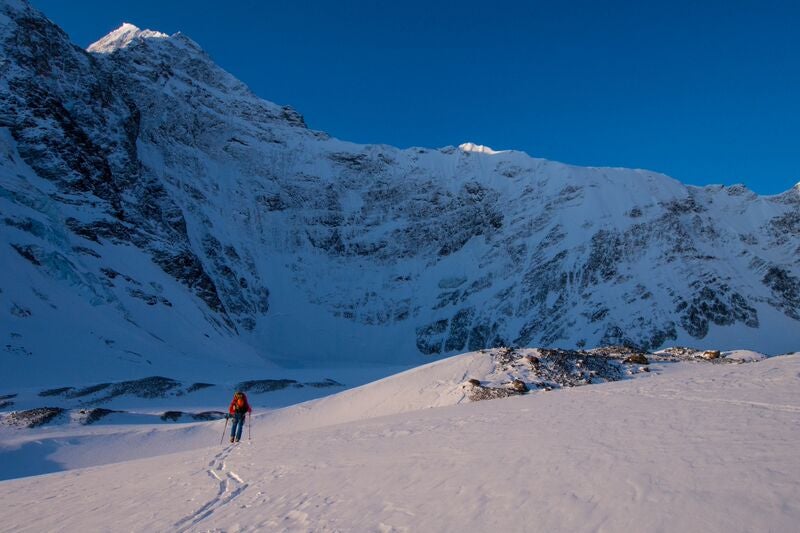 Crossing a bergschrund is always a meaningful affair. You’re showing the first level of commitment, you’re getting started and showing intent, and it’s normal to have butterflies. Shortly before we made that step, a large avalanche flushed the couloir to our left, something we’d toyed with climbing. Shortly after we made our first steps on the face, the same thing happened a few hundred meters to our right. Although 60 meters apart, we locked gazes and talked about options. Climbing mountains is about make-or-break decisions one after another, and this was definitely one. 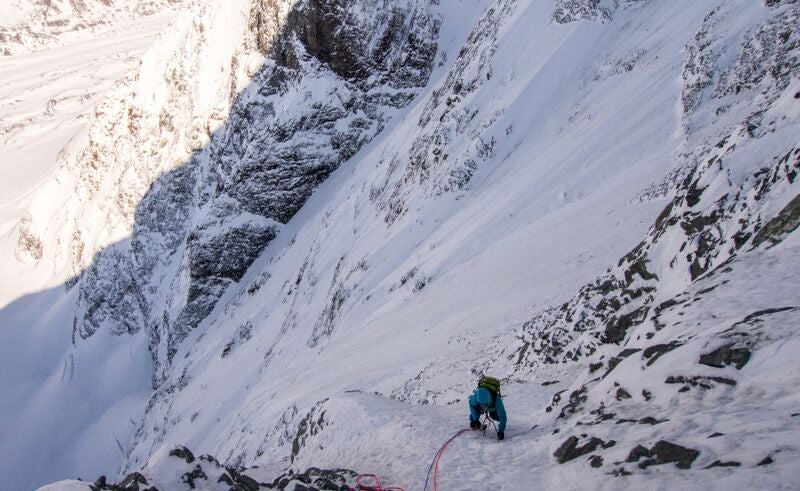 The face was far steeper than we expected; snowy ramps low on the face were actually 30-meter steps of near-vertical neve, and snow slopes were calving. We skirted a huge roof at half height on thin smears of ice, sometimes forced to move together on this tenuous ground until we were above it. The door seemed open to the upper part of the face. It was around then that the face came alive; huge plumes of snow, some like dust, some thick and concentrated, began thundering down the face in the region of our intended line. 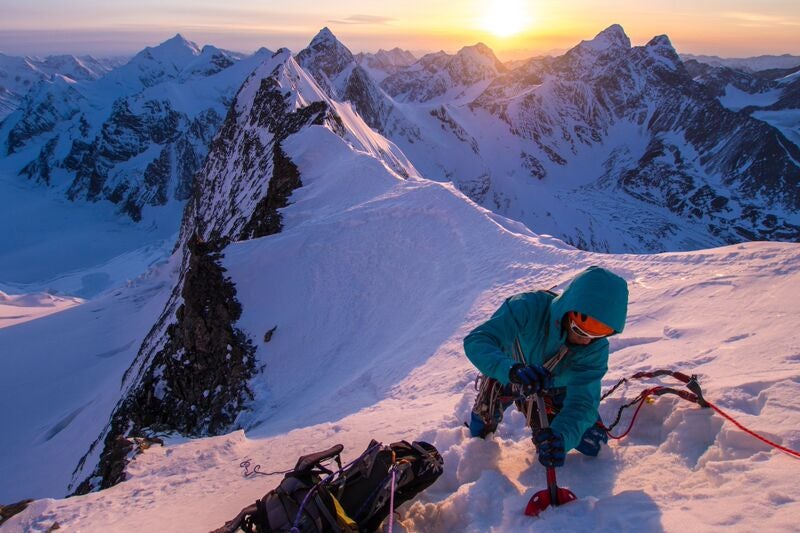 Hours later we reached the North West Ridge, glad to have escaped the face’s lethal mood yet feeling the strain of close to 20 hours on the go. It was getting hard to think right.

The summit of Deborah is a house-sized cornice. “Let’s call this the summit,” I said to Jon as I reached his belay a safe distance from Deborah’s dorsal-like crest. Day two had been another thousand meters of up and a hell of a lot of across. A spectacular knife edge reminiscent of a reptilian spine had us concentrating to the last meter. Now it was nice to engage downhill mode. Twelve inventive raps and a descent of the upper Yanert glacier saw us back at our bivy for a second night. This time with a little daylight to spare, we chatted over snow melting duties. The day had been longer and bigger than we thought. 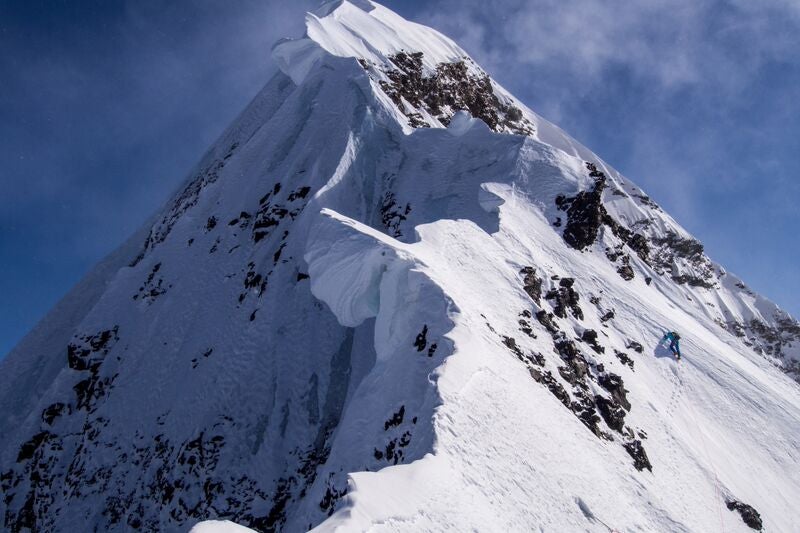 Lying outside our snow hole 24 hours later we gazed up at our face, now bathing in evening light. Another long and worrying day had seen us downclimb a ridge for over a mile before a committing set of raps under threatening cornices saw us to the floor, content but wasted. The fuzzy high of whiskey had taken over our beaten bodies as ZZ Top and “Bad to the Bone” found its way out of the speakers. It seemed to fit: Mount Deborah had been bad to the bone.