Welcome To The Holy Grail Of Winter Climbing 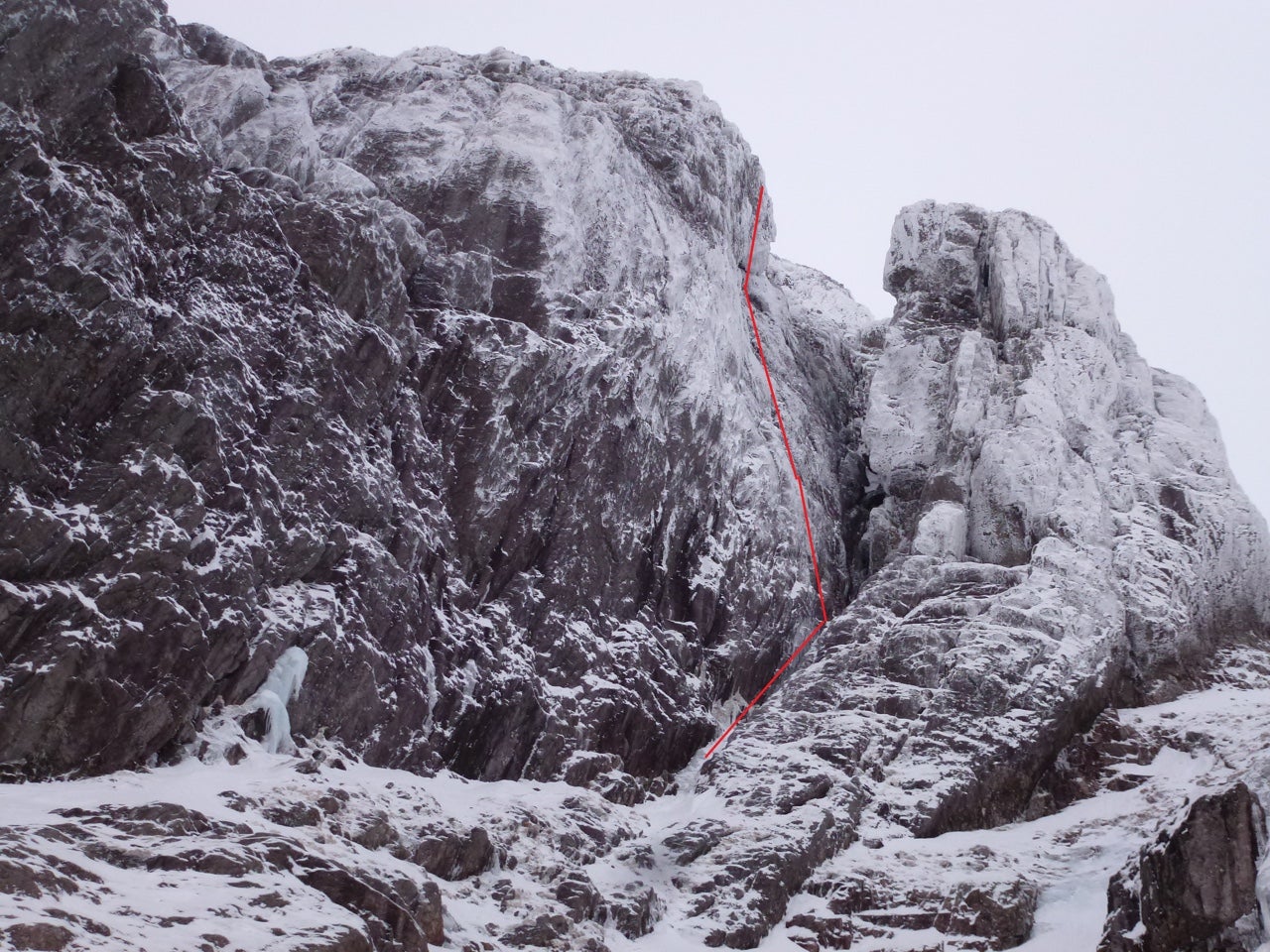 So, what exactly is it that you’re searching for? It’s a question often asked, but there’s rarely a ready answer. Inner peace? True love? Freedom? Self-fulfilment? Self-expression? Or maybe just “the ultimate ride? —make of that what you will. For many of us traditional winter climbers, however, our quest is clear: a steep, strong, natural line of weakness up a great cliff, in a wild place. A kind of Holy Grail, if you will.

After our much-lauded but in some quarters starkly derided escapades on Church Door Buttress earlier in the season, Greg and I were perhaps subconsciously nudged towards more patently icy winter objectives. The truth is, we went to Church Door, initially, knowing fine well that the season was young. The best winter routes on the best winter crags were still embryonic. The elevated, relatively clean and vegetation-free Church Door was a logical option with only a thin coat of winter and very little apparent build-up—though we were fortunate enough to find some ice. And so it was, after an easy day out shaking off the lingering after effects of the Scottish Hogmanay, Greg and I found ourselves gathering our thoughts, tuning into the ether and waking up to the chance of better conditions. 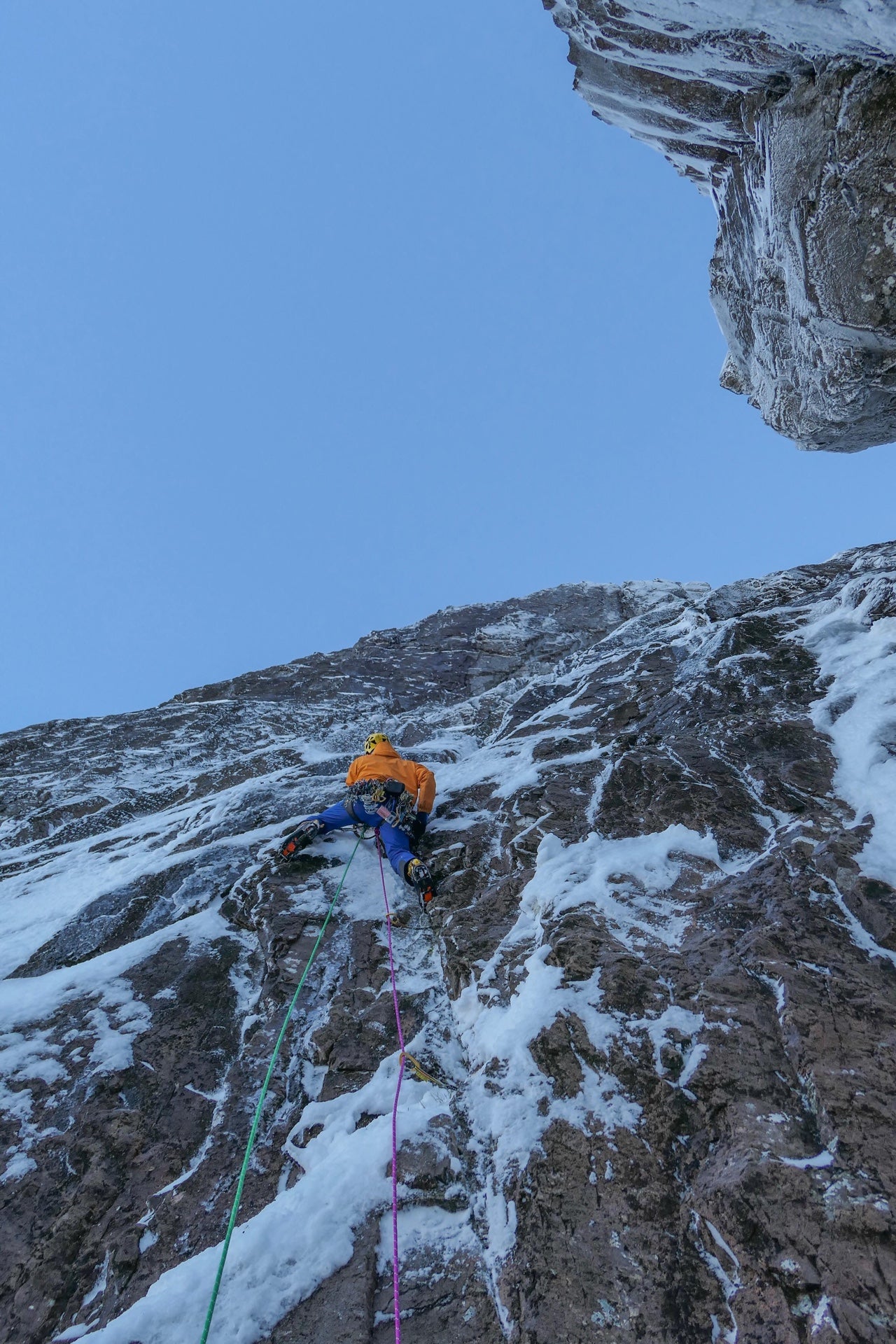 Buchaille Etive Mor translates as the “Big Shepherd” in the Gaelic, a most appropriate handle for one of the most iconic of Scottish mountains. Driving down from Rannoch Moor into Glencoe from the south, the Buchaille presents an almost symmetrical cone of sheer rock. There are very few easy routes to the summit and only one where a degree of climbing ability isn’t essential. Tucked round on the dark side of the Buchaille, overlooking the mouth of the glen, is one of the country’s most impressive and continuously impregnable rock walls, the evocatively-named Slime Wall. I’m not ashamed to admit that I have an insatiable passion for this frightful place; its history and mystery are most enticingly entwined. I cut my teeth on all its magnificent climbs, and have been fortunate enough to share the company and stories of its more illustrious pioneers. Greg, on the other hand, was a Slime Wall virgin.

“That line looks amazing!” he thumbed, obviously gawking at the photo I’d just sent him on Messenger.

Pretty cool, that’s one way to describe it. Here was a long, direct, vegetated, wet and unclimbed line soaring straight up through the beating heart of one of Scotland’s greatest cliffs. To add to the elixir, the most recent—and, in fact, only—previous first winter ascent had been some thirty-four years previous. This is rarely trodden territory, for the true connoisseur. I was fully aware of the history, but Greg much less so, so a potted education on the walk-in was duly delivered, ensuring he quickly grasped the significance of our ambitions.

The reason why this splendid feature had resisted serious attention for so long was painfully obvious. At about three quarters height, maybe three of four pitches in, lies a vast, dank recess known as the Great Cave. Every cave, of course, has a roof, and this one is no different. The logical continuation of the line above here is a great ten-meter horizontal rent slashing out into space above the expanse of the lower wall. It looked nearly impossible, but it couldn’t be ignored. 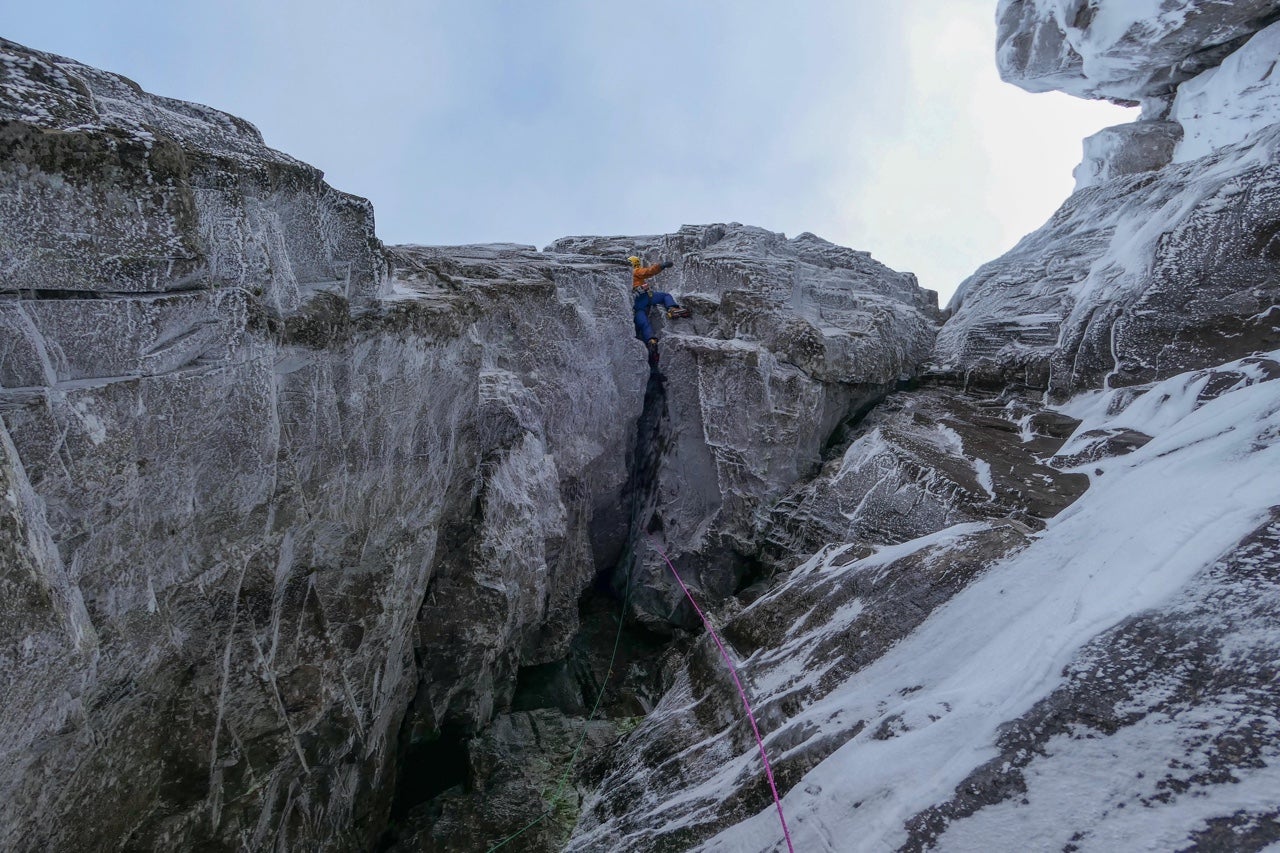 After the briefest of swithers below the crag we affirmed our shared intentions and I set off keenly up into the bowels of Raven’s Gully. Such is the twisted fabric of Slime Wall, particularly on its right side, that it’s near impossible to get a proper look at all of its features from below. We would just have to take our chances. An easy solo took us to the first of Raven’s many great caves, at which point ropes and protection were deemed necessary. This section was thin and steep but reasonable, and we pondered why a local party of guides had apparently bailed from around here during an attempt the previous week. Above this, our adventure proper unfolded.

The gully’s smooth left wall sported a thin, incipient crack, bulging at first but soon leaning back and curving elegantly up towards a junction with Guerdon Grooves sweeping in from down left. Tell-tale tufts of turf high up in the crack suggested that if the lower section yielded, we would then make rapid progress. Soon enough, the lower crack went without incident – good protection, and superb thin-but-positive torques with tears of ice for the feet saw us boosting rapidly up to a comfortable spike belay. Here we followed Guerdon for a short way, before quitting this and forging directly on up into more brilliant, unchartered terrain. A steep moss-infested groove drooled an icy sheen down its right wall, carrying us up to a commodious platform at the base of the Great Cave.

What an outrageously beautiful and atmospheric place that was! This monstrous Guillotine Crack soaring out horizontally above our heads, four hundred feet of sheer rock and ice below our feet, the giant boulder-strewn cleft of Raven’s Gully out to our right, and this framed by the soaring monolith of Cuneiform Buttress right again. And away out beyond the cold confines of our own mountain, across the mouth of the glen, the pink-hued peaks of the Mamores and Ben Nevis in the distance. Our intoxication was palpable.

“Out right could be an option, you think?” I offered up, nervously.

“Out right?! No way dude—there’s only ONE option I can see from here!” was Greg’s predictably emphatic and visionary response.

He was, of course, quite right. The patently desperate roof-crack leaning out above us was clearly the zenith of our day. It simply had to be embraced, and on this occasion, it was up to me.

Up to the base of the crack was fine, a wide crack on the left for hand jams, and more translucent slivers to stick feet on the slab to the right. Then a short layback torqueing crack up some sloping steps leading rightwards, into the base of the Guillotine proper. Holy Jesus it was steep! It didn’t just go out horizontally; it went out and then dropped down. But despite this obtuseness, I could just about fancy that as it gradually widened along its length there was the faintest chance I might just be able to wriggle myself inside. How to get there, and how to affect some upward momentum at the widening, this was the puzzle that appeared I’d need to solve.

After some justifiable procrastination, the answer became quite clear: Just switch off the frontal lobes and get amongst it. So often when we’re climbing we can draw on our personal bank of “engrams,” those pre-programmed moves and sequences assimilated through previous experience.  But this pitch was different, quite unlike anything else.  Genuinely 3D and apparently missing from my hard drive. 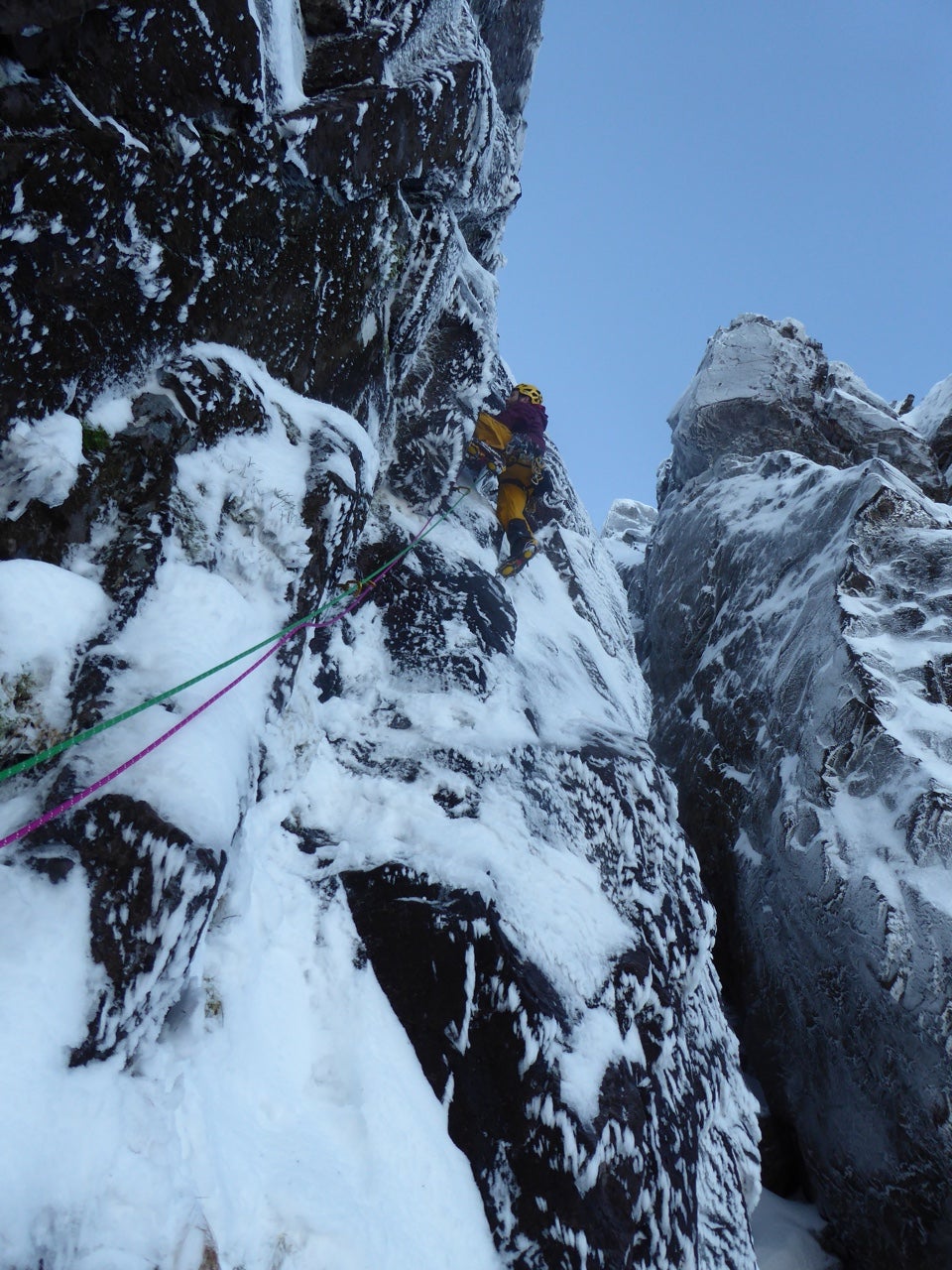 The first attempt was valiant, if somewhat confused, ending abruptly when a rattly chock stone ripped upon taking full body weight. After a brief respite on the ledge below, the second attempt soon gained a sense of extreme urgency. I managed to attain a strange sort of horizontal hip bar around my previous high point, but with arms, legs and core muscles all screaming under the strain of exertion, it was clear that this couldn’t be maintained for long and this attempt would be the last.  I had one decent left axe hooking the remaining chock stone, with my hips precariously lodged in the slot and my torso horizontally right. Any attempt to create the space to look down for footholds would suddenly release tension on the hips and result in hanging free from one hand—generally a scenario one tries to avoid. But what was I to do except remain thrust into this bastard mountain forever? Cutting loose again on the one axe, foot free above the abyss, my options were quickly running out. Then, in a strange moment of automation, my weight fell away right and the palm of my right hand fell onto a flat hold out on the very lip of the crack. Simultaneously, both legs swung high up left to match the left tool. With one gargantuan horizontal press, the unthinkable happened: I elongated tenuously up higher into the slot. Then again…..udging, and again…..squirming. I couldn’t move, stuck fast, feet kicking into space. Greg was laughing out loud below, bastard. He’ll never fit in here I chuckled to myself, in return. But somehow, miraculously, my gasping burrowing continued, and soon the flat handhold became a knee press, then eventually it accepted a foot. The Guillotine had fallen, and we had dodged its fatal blow.

I strung myself up in my little eyrie. Perched like a Hoodie Craw above the lip of the Great Cave, feet dangling into the dimming space and Greg’s torchlight dancing above. I smiled a smile there that felt the full width of Glencoe. This is precisely where we seek to be. It is our church, our home and our salvation, all in one. Flushed through by tremendous effort and emotion, our senses are on fire and our hearts beat like thunder. It’s as if for the first time, or maybe the last, but only that moment is what we can feel. We gaze down and out, and across and beyond, and look forward in equal measure. There is a strange power in these places. We should linger, savour them, drink in as much as we can. In so many ways, this really is our Holy Grail.