We’re Getting A Mural—And Giving Back 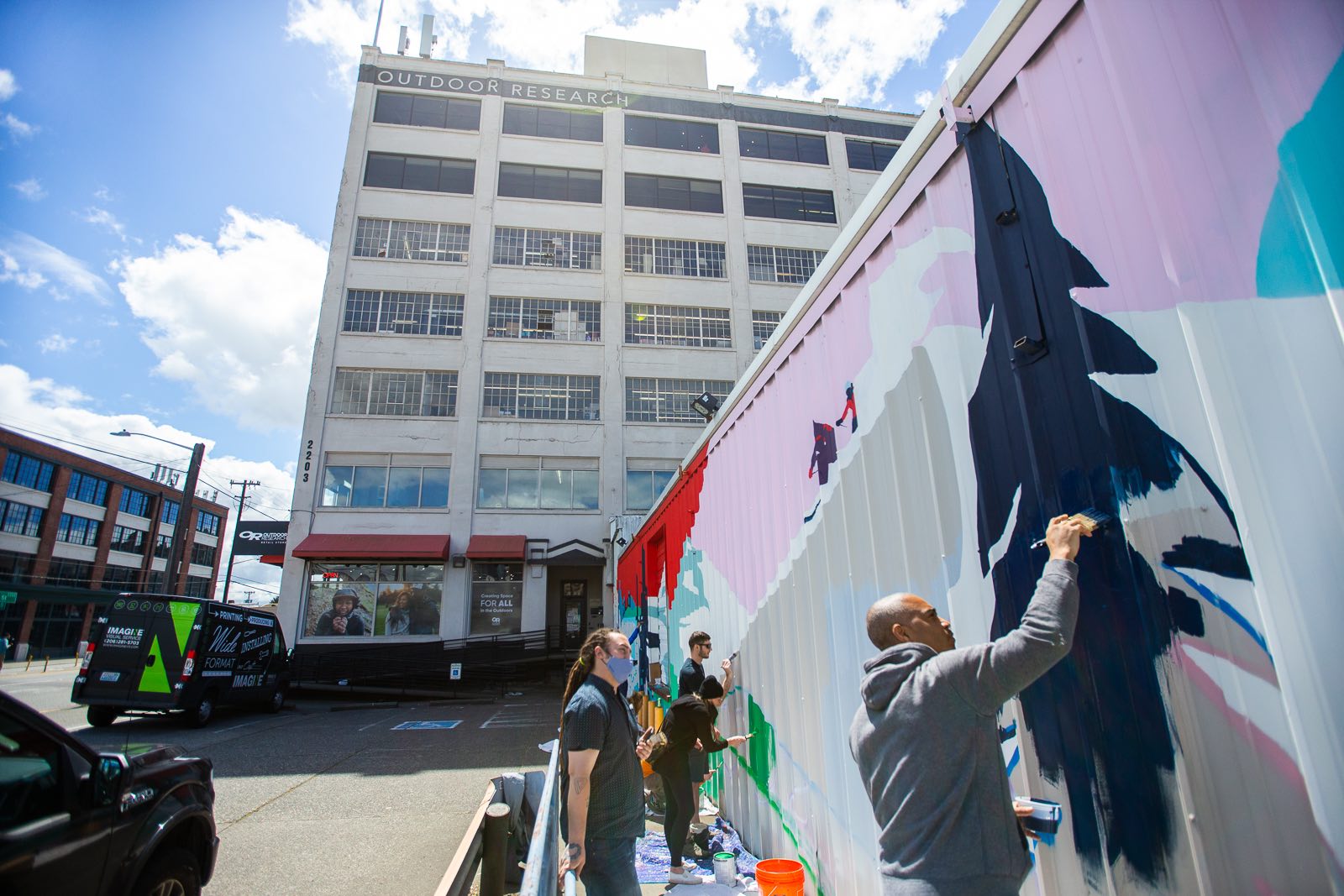 Partnering with UrbanArtworks and local artist Creative Lou, we’re giving back to our community and sprucing up our neighborhood.

Just like climbing a mountain, sometimes it takes a bit of bravery to make a work of art and put it out into the world. That’s what Damon Brown, aka Creative Lou, found when he first decided to leave behind his work in the design field to launch a career as an independent artist.

“It was a little bit of fear that was stopping me from putting my art into the world,” he says. “It was probably years in the making when I was able to say, this is okay, that this is my background, this is my story that led me here—this is what I want to share to the world.”

For Damon, that means combining his diverse artistic influences, from Disney and Marvel to graffiti and street style to more classical artists and illustrators.

This spring we’re excited to announce Damon’s work will be gracing the Outdoor Research headquarters building in SoDo as a mural.

Aiming to beautify our SoDo neighborhood and give back to the community, we’re partnering with an organization called Urban ArtWorks to bring Damon’s art to life on our building. Urban ArtWorks has long been connected to community projects in the SoDo neighborhood of Seattle where Outdoor Research is headquartered, providing apprenticeship, mentoring, and school-based programs for at-risk youth.

Damon created a design especially for us to bring a mountaintop perspective to the streets where we work. He says it will bring to mind “what it looks like to be up in the mountain tops, looking at our beautiful Pacific Northwest landscape, and giving a nod to all those who participate in the great outdoor activities.”

“What I like about a mural is the scale and the impact,” Damon says. “To be able to have something permanent and structured that people can visit when they come to a community or a neighborhood or a city. I think that's kind of powerful.”

You'll can also take home a piece of Damon’s work on limited-edition collaboration merchandise featuring the same artwork as the mural on our SoDo headquarters building. For each item, 100% of the proceeds will be reinvested into the community-building programs developed by the Urban ArtWorks team. The items will be printed by local Seattle printer Midnight Supply.

While Damon’s the artist with the big-picture idea, Urban ArtWorks connects the dots to actually get the art up on the wall. The nonprofit, which has been around since 1995, works with volunteers to create public art pieces and connect youth to the arts.

“We try to prioritize historically underrepresented creatives,” says Paul Nunn, projects lead for Urban ArtWorks. For both Damon and Paul, connecting with young people and giving back to the community is a No. 1 priority. Urban ArtWorks’ mission is to engage youth and communities in the creation of public art that inspires connections and honors their voices. They envision a world where all people have access to the transformative power of creating public art.

“When I was drawing as a young kid, I didn't have many artistic teachers or organizations that gave or fostered or taught the way Urban ArtWorks does,” Damon says.

Similarly, Paul found little encouragement to seriously pursue his art. “When I was really interested in art in high school, but didn't know any professional artists—I went to some art shows—but generally most of the people I grew up around were like, ‘Don't be an artist’ and ‘You’ll never make any money, don't do that.’ “

The Urban ArtWorks team, with professional artists like Damon himself, connects young people with professionals to help them see the vast array of approaches there are to being an artist. They aim to help others find the courage that Damon mustered to share his unique style with the world—and they also literally put paint brushes in their hands.

“So many people just really need the permission and the little bit of push to be like, ‘Yeah, you can do it,’ ” Paul says. “Here, I'm putting the paintbrush in your hand, paint right here, go for it.”

For community paint sessions, like the one creating the Outdoor Research mural, Paul makes sure everyone knows there are no mistakes that a bit of paint and a skilled hand can’t help fix—so the whole thing is a fun, low-stress process. “There's a Zen thing, a certain part of the area of your brain that unlocks that is really soothing, therapeutic,” he says. “And then a year later they can look at that and, be like, ‘Oh, I painted that square.’ ”

Getting together with strangers in the community, connecting with the artists, making time for that therapeutic activity—it’s all part of the plan.

If you find yourself in SoDo between May 15 June 7, come check out the work in progress. Or, stop by our unveiling June 19.

And even if you can’t be here in person, you can still support Urban ArtWorks’ mission by buying a piece of limited-edition collaboration merchandise.

← Previous Next →
Find a local shop