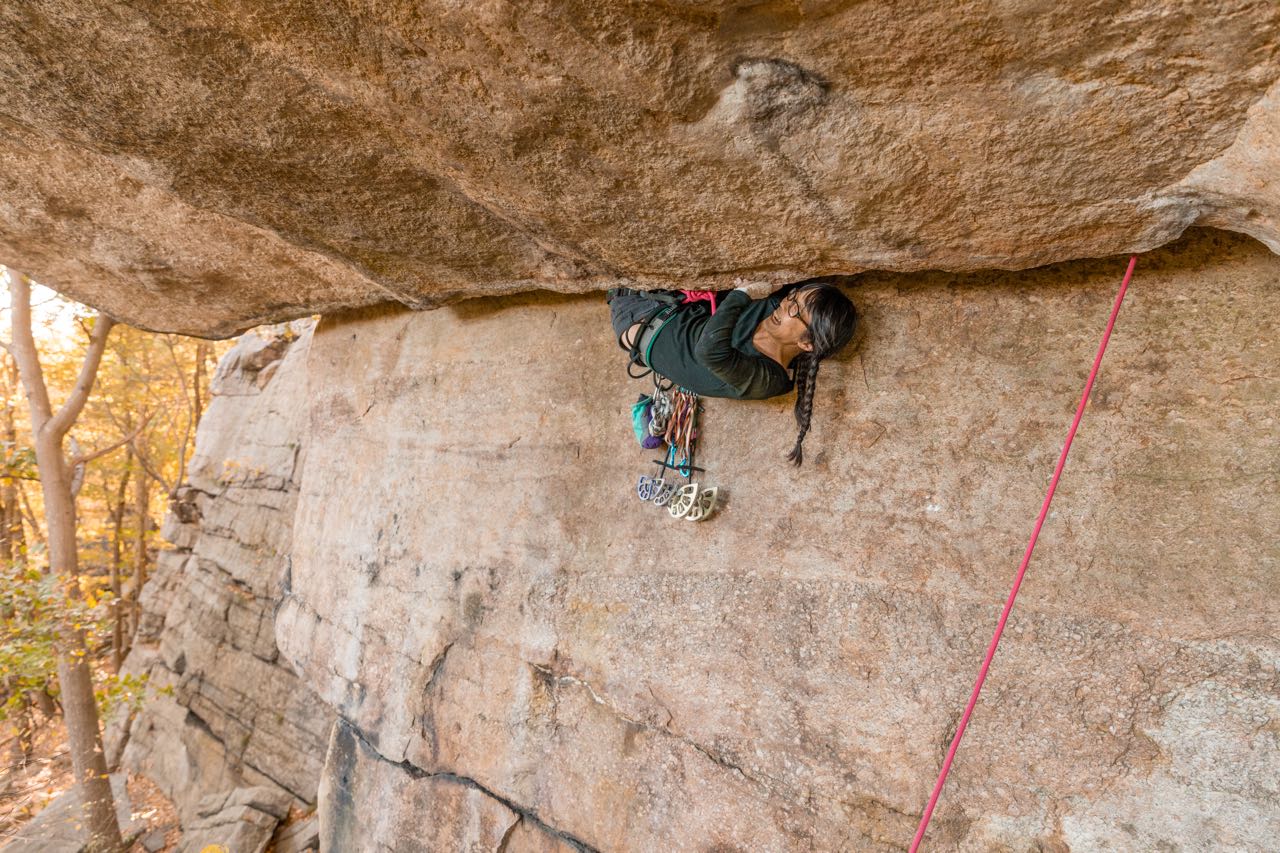 Last summer, Kathy Karlo set out to discover and share impactful stories about climbers you might not hear about in mainstream media. SIxteen episodes later, she's delved deeply into the human side of the climbing world, interviewing a climber figuring out how to exist as a trans person within the climbing communitty, talking with climbers who've worked through issues like an eating disorder and addiction, and delving into the process of grief and healing following losing a loved one in the mountains. We chatted with Kathy to find out more about her proocess and why you should be tuning in to "For The Love of Climbing."

Can you tell us a brief history of your climbing "career"?

I began ice climbing with an ex-boyfriend and his father in Ouray, Colo., before I even knew what rock climbing was. In 2011, I learned how to climb in the Gunks. Since my first gear placement, I never looked back and then in 2015, I ditched Brooklyn, NY, (my home of six years) to live out of my car for a year with goals of big wall climbing, aid soloing and exploring the alpine world.

During that time, what media have you particularly enjoyed? What (types) of media did you NOT enjoy?

I've always had a tendency to stray from the more mainstream climbing media because it tends to focus on the hard hitters and places a lot of emphasis on accomplishments alone. I have deep respect for climbers who push their limits, but I also connect really well with climbing media that focuses on the every climber and their stories. This didn't really exist when I started climbing! But that landscape has changed a lot in the past eight years.

What urged you to start your own podcast?

Two years ago, I phone interviewed Mary Harlan for my piece, “Do Not Go Outside to Cry” when she suggested that I start a podcast. She thought that my interview questions were really insightful. I told her, “If three more people suggest the same, maybe I’ll consider it.” Two years later and the first season is over halfway finished. I remember a little over a year ago, driving across the country trying to figure out how I wanted to shape this idea that I'd been sitting on. Ultimately, I wanted to create a storytelling platform for other climbers—people you probably wouldn’t hear about in the mainstream news but have deeply impactful stories.

What were the initial challenges, and how did you overcome them?

First challenge: I had no idea how to start a podcast! I'm what they like to call "technologically challenged." I remember being in Spain last spring and after a full day of climbing in Siurana, I would come back to our apartment and sit up until one or two in the morning cutting audio for the trailer and listening to it over and over again, until I got it right. I would say, "I wonder what this button does," and literally would just hit buttons and find out. I didn't have a lot of patience for YouTube videos. Thank god for the undo button.

Ultimately, I knew I had this great idea and so I told myself that I could figure it out. Recording and editing would be the easy part—writing and sharing the narratives of other people's stories in a gentle manner would be challenging. My biggest concern has been whether or not I am doing these stories real justice.

What is your ultimate goal with it?

I think that compassion begets compassion. It’s hard to understand things from another perspective when all you have is your own. Hearing these stories lets people experience them through someone else’s lens, and my goal is that it will change the way people reflect and feel, and ultimately bleed into our every day lives. That oh—and also make a million dollars.

What has been one of the biggest highlights for you since you started recording it?

Most people who produce podcasts these days do phone interviews. It's either that, or you're pretty limited to whoever is local to your area for guests. Because I work while I'm on the road, I've been able to schedule recordings on most of my trips which has been super helpful for sound quality but also, I get to meet these people in real life and have an honest face-to-face conversation with them. It creates a real connection, which is really important to me. And—I make a new friend. That’s probably my favorite part.

In one sentence, why would you tell people to listen to it?

Because you like to be emotionally gutted! Just kidding. But not ... I mean, who doesn’t enjoy having a really good cry? It’s cathartic as hell. I would tell people to listen because it humanizes people, which I think in the age of social media—we sometimes forget that real human beings are sitting behind these screens.

Can you tell us one or two of your dream episodes that you'd like to make?

There are so many people on my list. I’ve got a long list of people I’m still pretty intimidated to approach, but hopefully I’ll be brave enough to ask them. Now that the podcast has grown legs, it’s a little easier to ask people to interview since they can listen to previous episodes and have a better understanding of what it’s all about. I think I'd be over the moon to bring Brett Harrington onto the show at some point. I know she’s gone through some heavy life stuff losing her life partner, and I would love to meet her and talk with her through some of that. We’ve done a lot of episodes on loss but the thing is, grief is so different for everybody.

I’m keen to talk to Quinn Brett about her accident because I think there are a lot of people who will relate to the things she has been going through. I know she, like Brett, has been pretty open and vulnerable about it on social media. Those are two stories that I’m really interested in capturing.

I’m also really hoping to interview more male climbers. I’ve actually been really impressed so far—I think as far as the first season goes, half of the twelve recordings I’ve completed have been men and the other half are women. They’re topics all across the board, too. I think that’s a pretty good ratio. But I hope that more men can feel comfortable to openly discuss some of their personal hardships. The mainstream narrative says that being vulnerable is “feminine” but that isn’t true. It’s being human.