What It's Like To Start Climbing In Your 60s 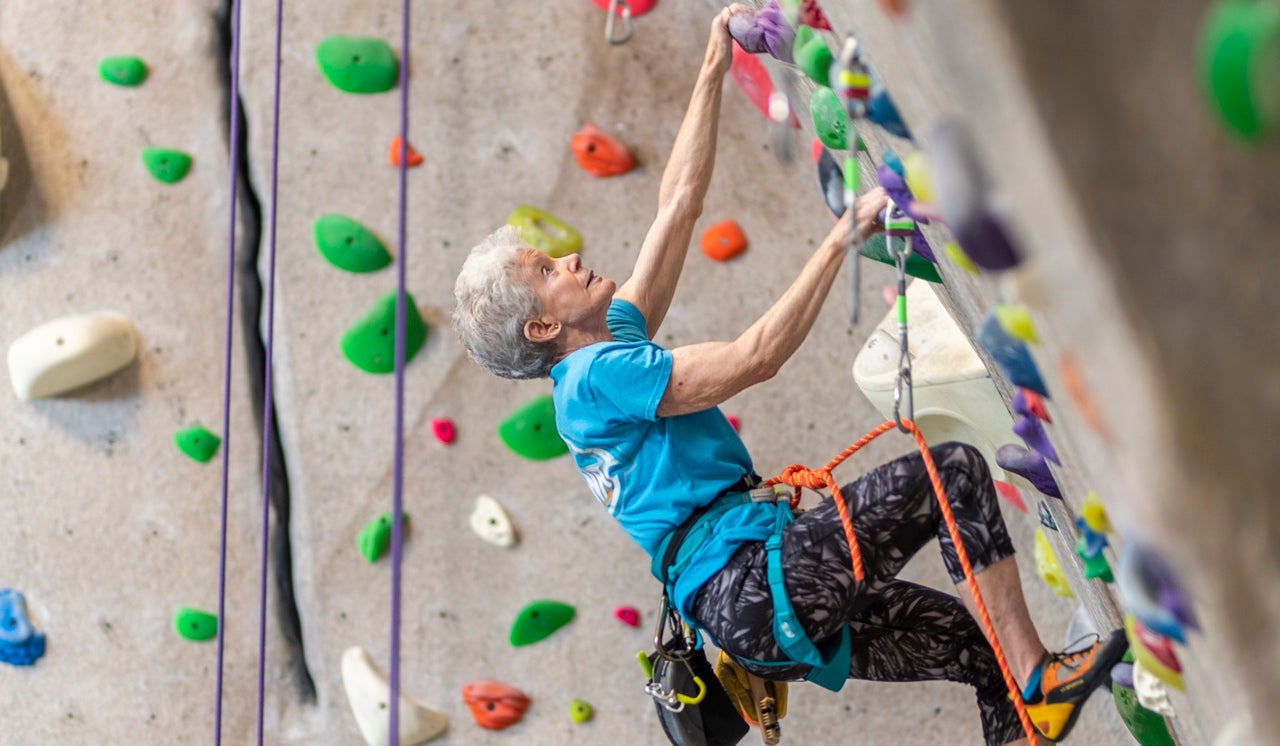 On a typical weekday, if you were to show up alone at the climbing gym in Des Moines, Iowa, and start up a couple of autobelay routes, odds are, you might get an offer for a belay from a 74-year-old climber named Kitty. Kitty Pokrzywinski, who lives up the road in Ankeny, Iowa, is quick to include new climbers and to offer beta she’s picked up during her typical three to four days a week at the gym. Advice like, “Quit chalking up—there’s plenty of texture on those holds, and you’re wasting your energy.”

Kitty certainly isn’t the only older climber around—Climb Iowa actually offers a Boomer-specific climbing class—but once she got a taste of climbing, at age 67, she was obsessed, becoming a regular fixture at the gym. And through learning to climb later in life and dealing with injuries and doubters, she’s learned a lot about what climbing takes, and what it gives. We chatted with Kitty to find out what it’s like to begin climbing, training, competing, dealing with injuries and finding partners when you’re over 60.

You definitely don’t have to live in the mountains to climb—and you might not even need a partner to get started.

Kitty started her climbing life by Googling the words “indoor climbing gym.” It was a dry winter in Iowa, and while she usually enjoyed snowshoeing in a nearby park, there had been little snow. So she stopped by Climb Iowa to check it out. “That’s all it took,” she says. “One look at those walls, and I was all in! I bought my gear and a membership and started climbing on autobelays, which allow you to climb without a partner.”

She took a few lessons from a trainer to get started and met a climber who was only a few years younger who invited her to join a group that climbed on Sunday mornings. Soon Kitty was aiming to climb multiple days a week, and even entered a competition. 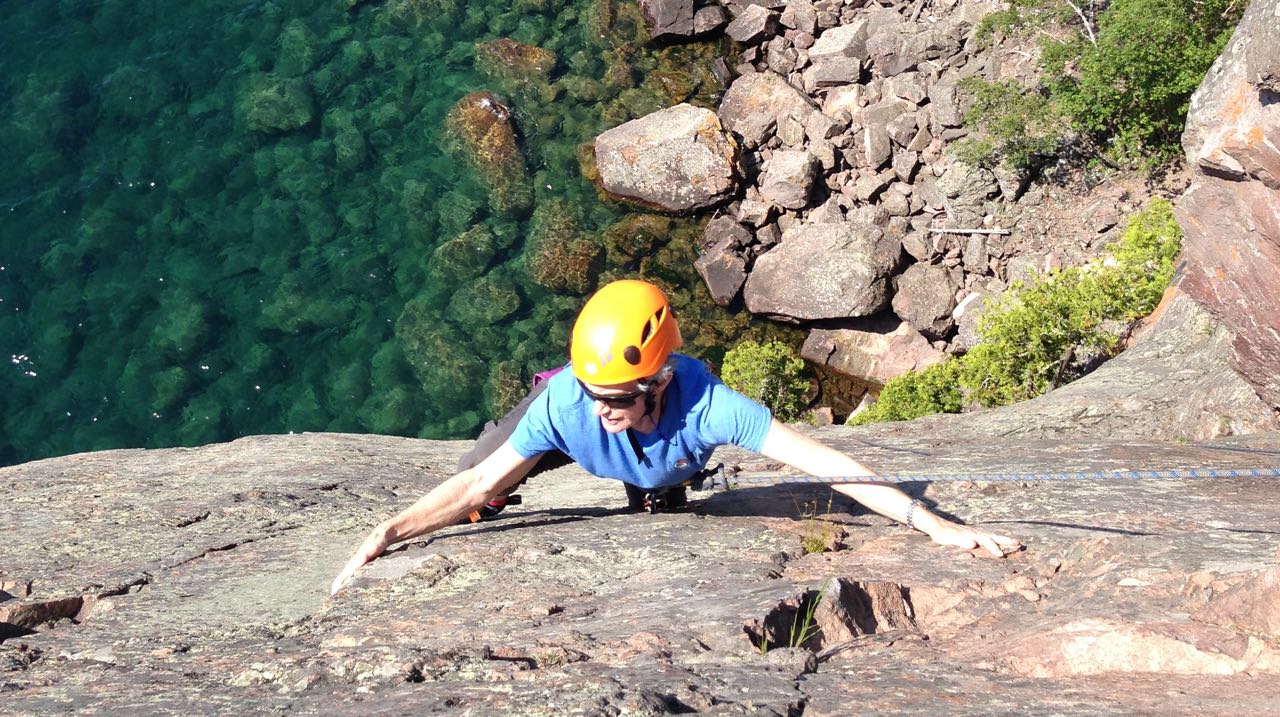 Starting out slowly can help—but you do you.

Kitty theorizes that staying injury free might be a bigger challenge for those getting started later in life. “I think there’s a big difference between those of us who take up climbing later in life than those who started early and merely continued to climb until they are in their 70s, 80s, or even 90s,” Kitty says. “The latter group have hardened their connective tissue over the years; the former group may never be able to reach that level of fitness.”

Kitty grew up being active—from competing in horse shows to biking to canoeing and kayaking. But most of those sports were focused on the lower body, and she thinks that diving into climbing the way she did—whole hog right away—has contributed to some of the injuries she’s sustained while climbing. (Torn rotator cuff, knee replacement, fractured bone and torn ligaments in a foot, to name a few.)

Because muscle adapts more quickly to activity than connective tissue like tendons and ligaments, she says, it might help to hold back from trying to progress super quickly. But as soon as she says that, she admits she’s a driven person and not one to heed her own advice. “Would I have listened had someone cautioned me to go slower? No, I think not.”

A supportive community makes all the difference, and you can help create it yourself.

Kitty’s first experience rappelling, long before she started climbing, was not positive. She was joining her now ex-husband, who’d gotten into rappelling—specifically enjoying going face first—on limestone cliffs outside St. Louis. Kitty had recently had knee surgery and her knee began to shake 10 feet down the route, so she decided she wanted to bail. She says her husband was furious that he had to haul her back up the wall. (She notes that later on she was the furious one, when she found out there was an overhanging section he hadn’t told her about on the route.) Now, at Climb Iowa, Kitty says she’s found a welcoming community.

“Everyone wants everyone else to succeed, and no one holds back on tips that might help another climber,” she says. “I’ll frequently ask a person climbing autobelays with no partner if they’d like a few belays on the other routes. We might climb together for a year or more.”

She’s climbed with men and women of all ages, some of them dedicated partners. “Currently I have assembled a group of four to five women over fifty who climb together, three over 70, two in their late 60s, and one in her 50s,” she says. “We call ourselves The Adventure Girls of Climb Iowa.” The group has taken multiple road trips to climb outdoors. 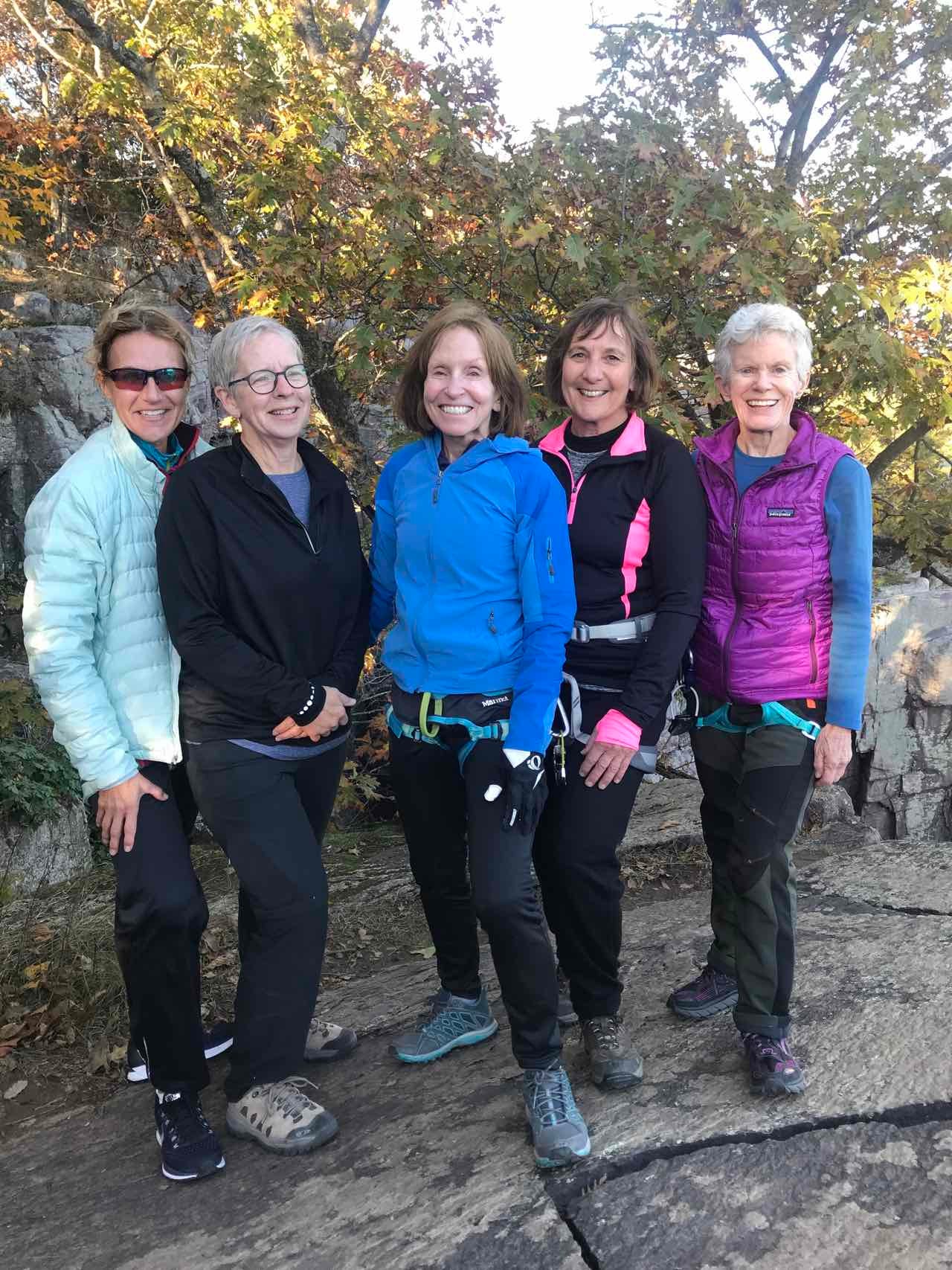 Climbing is whatever you make it.

“The great thing about climbing, at any age, is that your goals are self-selected,” Kitty says. Most of Kitty’s climbing partners also got started in their 60s, and enjoy climbing moderate routes with plenty of chatting between belays, often climbing in a threesome and hitting the gym two or three days a week. Kitty, on the other hand, prefers to climb quickly, with a single partner and minimum chatter if she can. She enjoys projecting routes she may never be able to climb cleanly, thriving on the physicality. Kitty says those partners who take it a bit easier have remained mostly injury free, but she wouldn’t be satisfied if she didn’t challenge herself more.

“You can climb for fun and exercise by choosing routes that are fun but do not put undue strain on your body. You can be a grade-chaser, climbing successively harder routes to find your limit, and then trying to raise it. You can compete against yourself to get better, or you can compete against other people. You can choose to emphasize beautiful technique over sheer power, or you can see how much power you can develop and how strong you can make your climbing muscles. Your goals can be whatever you decide, and no one will fault you for pursuing them.”

Climbing is a great reason to travel.

In case you weren’t aware, there are no mountains in Iowa. So for Kitty and her climbing buddies, climbing outside requires taking a trip. And an organized trip helped get her started with outdoor climbing. Kitty’s first outdoor climbing trip was to Palisade Head. “It’s a huge lump of granite with a cliff face going straight down to the water,” she says. “You must rappel down and then climb back up. I was one of four people on a trip run by Vertical Endeavors, a Minnesota gym chain. It was a thrilling introduction to outdoor climbing.”

Kitty has since also climbed at Devil’s Lake and Horseshoe Canyon, and also makes a point of checking out other gyms across the country. “Especially those which have higher walls than Climb Iowa does,” she says.

“I never have trouble finding partners,” she says. “I look for the oldest people in the gym and introduce myself, and they never fail to offer to belay me. If there are only younger people, I find ones climbing a little above my level and ask if I can join them. I won’t usually approach 5.12 climbers unless there are some 5.10 or 11 routes nearby. I was at Mesa Rim in San Diego one year, and after my first partner had to leave, the manager brought me another, and then another when he left. I was able to climb for hours without stopping.”

Climbing over 60 still has its unique challenges. Here are a few tips.

“Every woman in my climbing group has problems with arthritis in her fingers,” Kitty says. “But it tends to fade with a long rest period. Yet none of us allows this to stop us from climbing.” She recommends a thorough warmup before climbing, to help lower the chance of injury. “First for your whole body to get the blood flowing, and then for your climbing muscle groups: shoulders, forearms, hands, core, biceps, triceps, glutes, hamstrings, quads, calves, and then dynamic stretches of all these muscles.” Kitty says no static stretches for cold muscles—save that for after climbing. “Then do about six easy routes. I use this time to do technique drills, such as using high feet, reaching high holds, flagging, and footwork. My progression may look like this: 5.6, 5.7. 5.8. 5.8, 5.9, 5.10ab. I’m pretty diligent about my warmup routine.”

Kitty is also a firm believer that older climbers benefit from using assisted braking devices. “The reason I’m so in favor of these devices is that you never know what might happen—a heart attack, a stroke, rockfall, a bee sting—that might cause you to let go of the belay rope and subsequently drop your partner. I personally also use gloves when belaying, just for extra security. I would recommend an ABD to everyone of any age merely for the extra security.”

She has also rethought her approach to lead climbing. While she’s only ever had two unexpected lead falls, her most recent left her with a broken foot, unable to climb for months. “I was already cautious about leading any real rock, but I realize that I will need to limit my exposure to potential swings outdoors even toproping,” she says.

Climbing has a lot to offer.

“In spite of the injuries, I feel climbing has given me more than it has taken away,” Kitty says. “I tend to be a high-achievement, competitive person, and the sport has allowed me to feel accomplished at a level I am satisfied with. I am happiest when I can make a hard climb look effortless, like ballet on the wall. My proudest times happen when I successfully climb a route that was so difficult that I had to work at it repeatedly in order to do it cleanly. One of those times happened on my 70th birthday. I had taken the Advanced Movement class at Climb Iowa and had been assigned to complete a 5.10cd as my project. One thing that drove me was the fact that another student had voiced the opinion that the route was “too hard” for me. I like a challenge. And I made my first clean ascent on my birthday.”