What We've Lost In The Methow Valley Wildfires 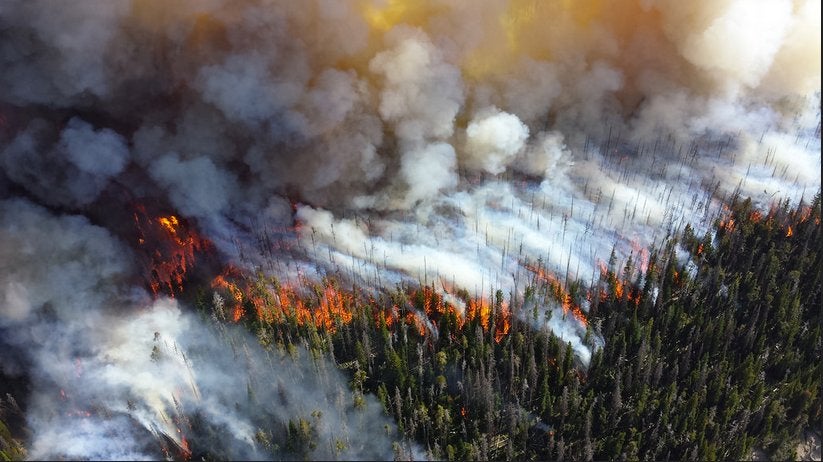 I am haunted by a scene from about a week ago of young U.S. Forest Service firefighters taking a break at The Mazama Store, which I consider the best “hang” in the Methow Valley, just across the Cascades in central Washington state. They were such babies, so long and lean and fit, seemingly drowning in their impossibly large firefighting garb. In addition to soot and grime, they wore the look of thorough exhaustion that you see on the faces of new parents. And yet, with doors swung open on their white SUVs, they sat with crusty boots slung atop seats, chatting, eating, drinking and, yes, smiling. They were not broken.

Just days later, last Wednesday afternoon, three of their ranks were killed when their vehicle crashed and was overcome by the fire now raging near Twisp, Washington. One of their colleagues, a 25-year-old man, is in critical condition at Harborview Medical Center in Seattle. Can those young people possibly remain as unbroken as they appeared in Mazama? They’ll have to.

Rep. Dave Reichert, R-Washington, a career first responder, fought back emotion as he addressed a press briefing in Chelan on Thursday morning. He represents the 8th congressional district, much of which now is up in smoke, and once he lost his partner and best friend in a gunfight. “It hurts deep,” he said, “but the job goes on.”

The job, as Washington Gov. Jay Inslee just noted, is “unprecedented cataclysm.” Some 390,000 acres are ablaze in the state, according to Inslee, already topping last summer’s total, which then seemed unfathomable. At more than 256,000 acres, the Carlton Complex Fire accounted for more than three-quarters of the acreage that burned in the state last year, making it the largest wildfire in Washington’s recorded state history. More than 300 homes were damaged.

The Okanogan Complex Fire, which was nearly 125,000 acres strong as of Friday morning, endangers much of the same area. The Twisp River Fire in which the firefighters perished has been merged into the Okanogan Complex. The Okanogan is feared capable of eclipsing the Carlton fire because of high winds and dry conditions.

I feel like one of those people who, upon learning of an acquaintance or loved one’s demise, declares, “But I just saw her/him yesterday.” As if the act of recently encountering someone cancels the fact of that person no longer existing. I was just breathing the ashy air of what seemed to be a perpetual campfire at the North Cascades Institute, which now sits vacant after Wednesday’s evacuation. I was just squinting at the normally spectacularly Technicolor peaks along the North Cascades Highway, which now is closed from Rainy Pass to Newhalem. That little company town owned by Seattle City Light is where we observed plumes of smoke on our way home. Rainy Pass is the location of trailheads from which my wife and I took two hikes whose vistas often were obscured by smoke.

The whole region is an inferno? But I was just there. I’m a native Seattleite and North Cascades National Park, just 2 ½ hours away, is one of my favorite places to hike and photograph; this was my sixth visit this year.

Back in June, I also was in Queets Valley, in Olympic National Park, as the Paradise Fire that eventually erupted there was simply smoldering. Many have seized upon that fire as significant because the Queets, being a rainforest, is such a ripe symbol of the consequences of climate change. I see that, but being there amplified to me the area’s remoteness. Nothing burns a hole in your heart, to paraphrase Inslee’s characterization of the firefighters’ deaths, like putting a face on tragedy.

We almost did not visit the Methow Valley Interpretive Center, which is squeezed into a trailer house in Twisp. It was Sunday and the downtown area was deserted, as was TwispWorks, the artist enclave that encircles the center. But it was hot and we already were disappointed that we couldn’t drive down to Wenatchee since the route passed through Chelan, which was ablaze and being evacuated.

The senior woman volunteer on duty that afternoon probably hadn’t been expecting visitors when we sauntered in. She was engrossed in a paperback book, but glanced up and cheerily offered to answer questions. That’s how I came to know what was meant when officials issued a Level 3 evacuation in Twisp and Winthrop on Wednesday.

There was a Level 3 evacuation in Twisp last year, the nice lady said. I was thinking in Defcons, where lower numbers express higher states of readiness. I asked how high the evacuation scale went.

She got out; she was going to visit her daughter anyway. Hopefully, she’s returned. My wife and I feel badly that we didn’t learn her name.

There are more than 100 large, uncontained wildfires raging in 15 western states, according to Tom Tidwell, the U.S. Forest Service chief who Thursday called the spread and intensity of wildfires “the new normal.” More than 7 million acres already have burned in the U.S. this year. Washington, my home state, had 25 active wildfires as of Friday.

A lot of people saw this coming, but that doesn’t make it any easier to stomach.

Snowpack melt was up to a month earlier than 50 months ago, according to the National Wildlife Federation, and combined with warm weather extending further into fall makes for longer fire seasons. Summertime temperatures are projected to increase 3.6 to 9 degrees by midcentury, creating drier, fire-inducing conditions, the NWF said. The climate-induced changes have led to widespread insect infestation, creating wildfire fuel in the form of dead and highly combustible trees, and lightning is becoming more prevalent because of more severe thunderstorms, the NWF reported.

It’s an insidious cycle with no end in sight. Scientists, to wit, point out that carbon dioxide released back into the atmosphere by wildfires worsens global warming.

The fires consume more resources. Firefighting comprised 42 percent of the U.S. Forest Service budget in 2014, for example. It was 16 percent in 1995. Inslee has deployed five 20-person crews from the Washington National Guard with perhaps two more on the way soon. Washington will receive more resources via a federal emergency declaration approved by President Obama on Friday, and likely will receive international assistance from Canada and maybe even Australia.

Wildfires also cause inconvenience that must be kept in context.

The power went out in the region during our last night in the Methow. The Mazama Store remained open and the mood stayed festive. It was Brat Night at the little food booth in back, but lack of electricity meant the bratwurst could not be grilled. They kept the beer flowing, however, and sold the brats raw at a discount; we cooked ours on the gas grill at our cabin. We couldn’t be bummed, especially when fire burned through the Twisp River line last Thursday afternoon and residents were warned by the Okanogan County Electric Co-Op not to expect power for “a few days.”

As we were leaving the next morning, we spied a black bear on the grounds. When I reported the sighting, the front desk attendant said bears were usually not spotted there. We had been wondering, as nothing in the complex or surrounding area was bear-proofed. Later at the Interpretive Center, we viewed the skeleton of a young bear burned to death in the Carlton Fire, which had seared off its two front paws. It occurred to us that the black bear we saw might have been chased away from its natural habitat by wildfire.

I can’t be certain that’s true but, sorting through the haze of both memory and current developments, it seems sadly plausible.