When brothers Andy and Jason Dorais—ski mountaineers and ER doctors based in Salt Lake City—heard that they'd have a camera following them around for a while, their first thought was, "A film about two dorks skiing around can’t be that interesting." But when Fitz Cahall, creative director at Duct Tape Then Beer, showed up, it seemed obvious that there was a much bigger, much better story there. "It seemed clear that the story of family was more important—to us and in general—and I think the focus of the film changed," Andy says.

The Dorais story is one about pursuing happiness, setting priorities and family. The brothers are known in the mountain sports world for setting fastest known times, and for how much they seem to be able to accomplish athletically in between shifts at the hospital. If you watch their blogs or Instagram posts, you might think they're the feeds of young, single dirtbags spending all their time skiing, running and generally crushing in the mountains, but nothing could be farther from the truth. Andy works hard to balance time with his wife and kids, and Jason's outlook on life has shifted in a positive way since his now-wife Amanda was diagnosed with cancer. We caught up with Andy and Jason to see what they thought of the whole film thing, and what advice they have for others looking to balance their personal passions with family and work. Here's what they said.

Did anything surprise you throughout the filmmaking process?

J: I’m always surprised with how candid and positive Amanda is. I think for Andy and I it’s pretty easy to ramble on about trivial things like skiing, climbing and running. Watching Amanda open up and discuss cancer and its complications is a whole other issue.

A: Witnessing how fragile life can be. Amanda’s diagnosis certainly was a shock, as was the misfortune of Jim Harris who was helping out with the film. We had dinner with him the night before he left for a big ski adventure in Patagonia.  uring the trip he was involved in an accident that left him paralyzed. Fortunately, with a ton of hard work he’s well on the road to recovery. But all of this really reminds me how precious our health is.

I think a lot of people were touched by the tenderness and inspiration they saw in Dorais. What advice would you give to people who are struggling to balance family and outdoor adventuring?

A:  Know what your priorities are. Once you know your priorities, you can actually work on balancing them. For me it’s family and adventuring. I think I just skim time from everything else.

J:  Everyone’s different and balance is hard. I think the biggest thing for Amanda and I is that we both want to make each other happy and we work on doing that daily. 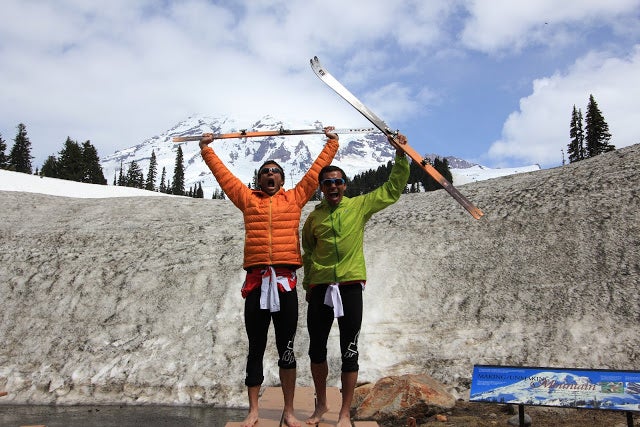 What advice would you give people who don't think they have the capacity to get out and do things the way you do?

J: You just have to get out and start doing. If you’re passionate about something and put the time in, you’ll figure out how to do it and do it well.

A: Agreed. Persistence is key.

How is Amanda doing?

J: She’s doing well and being tough like always. She’s been struggling through another round of chemo for the past couple months. It seems to be controlling the growth of her tumors but not really shrinking them. We’re in the process of changing therapies. She’s just rolling with the punches and staying happy.

Any big goals on the horizon?

There are too many to name. If only we had more time! As of now we have a little bit of time set aside to head to Colorado and the Tetons.