Why Climb Just One Tower, When You Could Link Them All? 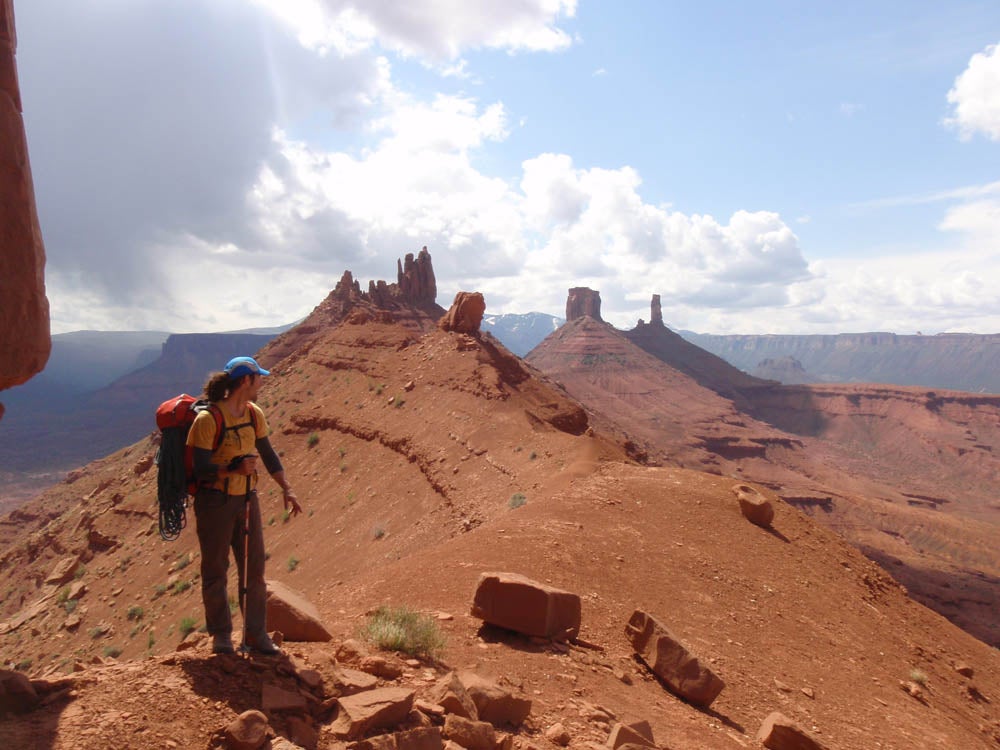 The first time I heard about the Castle Ridge Traverse, it was from badass alpinist Stephan Siegrist more than 10 years ago, when he mentioned he was planning to climb it. Assuming that something must have been lost in translation, I responded, “You mean Castleton Tower?”

“No, we’re going to climb everything up there.”

I pondered this idea for the next ten years. Castle Ridge is a four-mile-long ridge that runs through Utah’s Castle Valley, about 20 minutes outside Moab. Five sandstone skyscrapers line the ridge at an elevation of about 7,000 feet, contrasted by the snowy La Sal Mountains rising in the background.

Finally the pieces came together for me to try the linkup. My brother-in-law Carter called. He wanted a partner to put together his own desert dreams before the summer heat settled in. There was no discussion of what we would do—it would be the Castle Ridge Traverse.

Our first route on the linkup was the Value of Audacity on The Convent (5.11++, 400’), which should have been named the Value of Warming Up First because after 20 feet of easy climbing, there’s a huge roof with some difficult climbing and terrible rope drag. Not to be defeated so soon, we pushed on.

A spectacular and spectacularly loose ridgeline took us to Sister Superior (5.10, 350’), the only tower we encountered other climbers on. The Sister went down quickly and we were on our way again.

The hours, the towers and the miles of ridge travel crumbled beneath our feet. Hiking to the Priest (5.11b, 350’) involved what felt like a 45-degree hard-packed slope with a truckload of gravel poured over it for absolute insecurity, plus 1,000 feet of exposure above the vast desert badlands below. Roping up with protection was a welcome relief after that.

Things got a little bumpy by the time we were on Fine Jade (5.11b, 400’). My coordination, balance and reverses seemed to be tipping into the red. Familiar ground I had climbed many times seemed foreign as I struggled to fit the puzzles of movement together. We even got our ropes stuck on the rappels, both above and below simultaneously.

By the time we arrived at the base of Castleton Tower’s North Chimney (5.9, 400’), a cloak of darkness had fallen over the land. There was no longer a need to hurry—we just needed to pace ourselves for the finish. If we kept our fatigue at bay long enough to keep from making mistakes, we would be back at camp safely in a matter of hours.

Climbing at night is surreal. Tucked in the dark depths of the tower, our world was no larger than the beam of a headlamp and a narrow strip of stars visible outside the chimney. Dreams of food fueled our final ascent and the rush through the darkness back into camp.

It’s always funny to leave behind the surreal peacefulness of climbing to return to the civilization of camp. We were greeted by a parking lot full of cars, tents and camping equipment scattered across the night into the Juniper trees. A guy appeared out of the darkness, clearly drunk. He introduced himself as Kenny and proclaimed it was his birthday. He continued to talk and talk and talk while Carter and I dug into the cold fried chicken in the cooler. I tried to ignore him and politely nod in acknowledgement to his excited comments about climbing for the first time. He was psyched, and hammered. We were worked, too tired for beer and too tired for Kenny.

Under the stars, I put my headphones on hoping to make the noise go away, grasping for a bit of sleep. When campers and bright sun woke me, I realized my effort to find an unoccupied flat piece of dirt to sleep on had left me right next to the road, a proper spot for a drunk vagrant to pass out. Classy.

Want to do it? Here’s the route we took:

Honeymoon Chimney, the priest 5.11b

Be sure to be prepared with:

double set to cams to #4 camalot