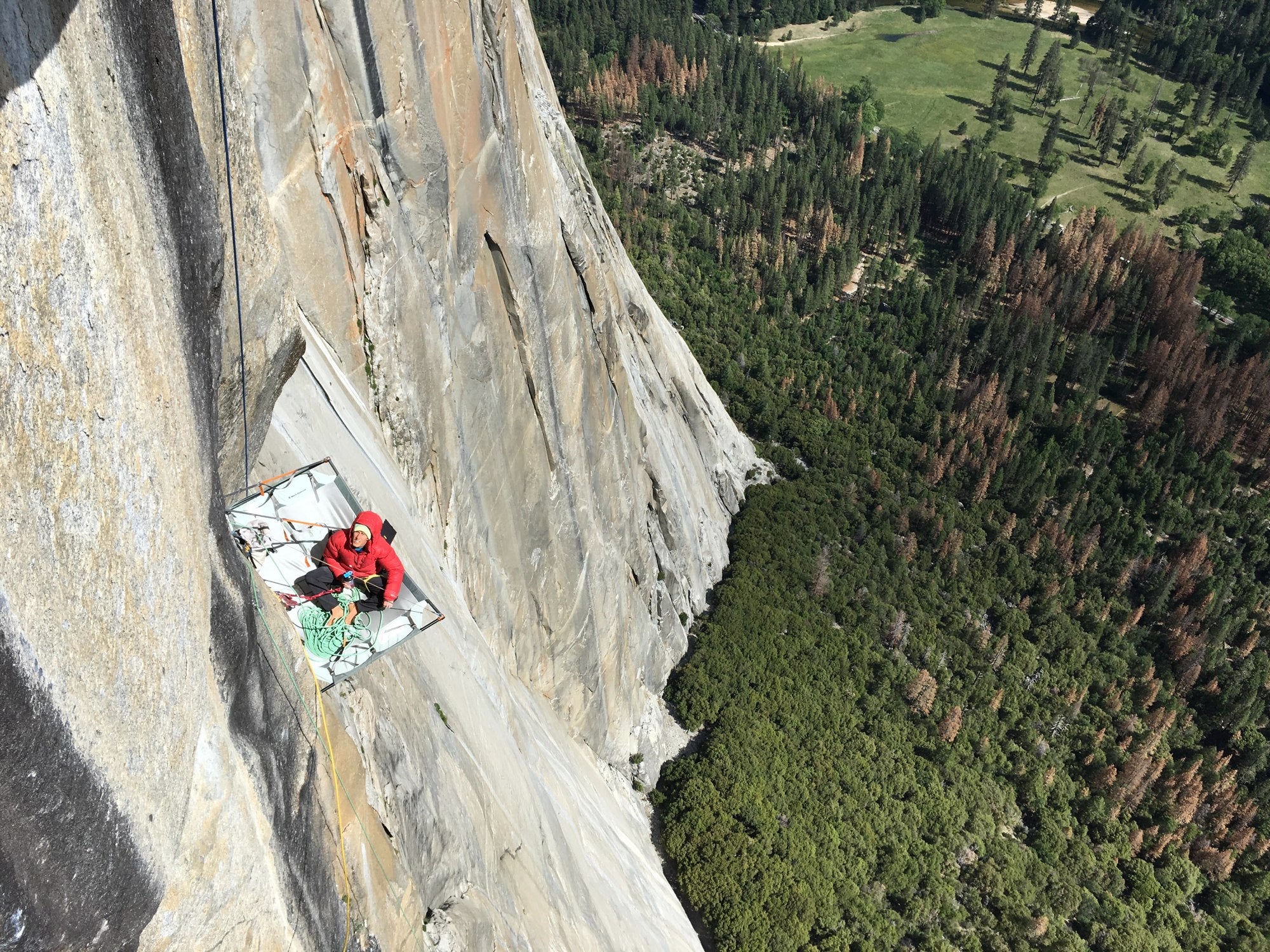 Find inspiration, make a goal, dedicate yourself to the process—that mindset has taken me from goal to proud achievement many times over the years. Working with this formula, I’ve found success following the established routes on El Capitan, Yosemite Valley’s “motherstone.” And ever inspired by its waterfalls, black oak trees, ponderosa pines, Merced River and sheer rock faces with perfect stone, I drove into Yosemite Valley this spring. But this time, I was searching for a different kind of experience.

This time, I wanted uncertainty. Adventure and camaraderie. To me, there was no better partner than Mason Earle. We had never taken on a Yosemite objective together, but I trusted his experience and our ability to work as a strong team. We spoke about a new free route on the left side of El Cap, salivating over the possibilities. Never Never Land, an aid line first conquered in 1978, exuded everything I desired. Mason and I would apply my tested formula by taking this route into the next generation of El Cap free climbing—if only we could find the way. With Mason’s arrival to The Valley, the work began. 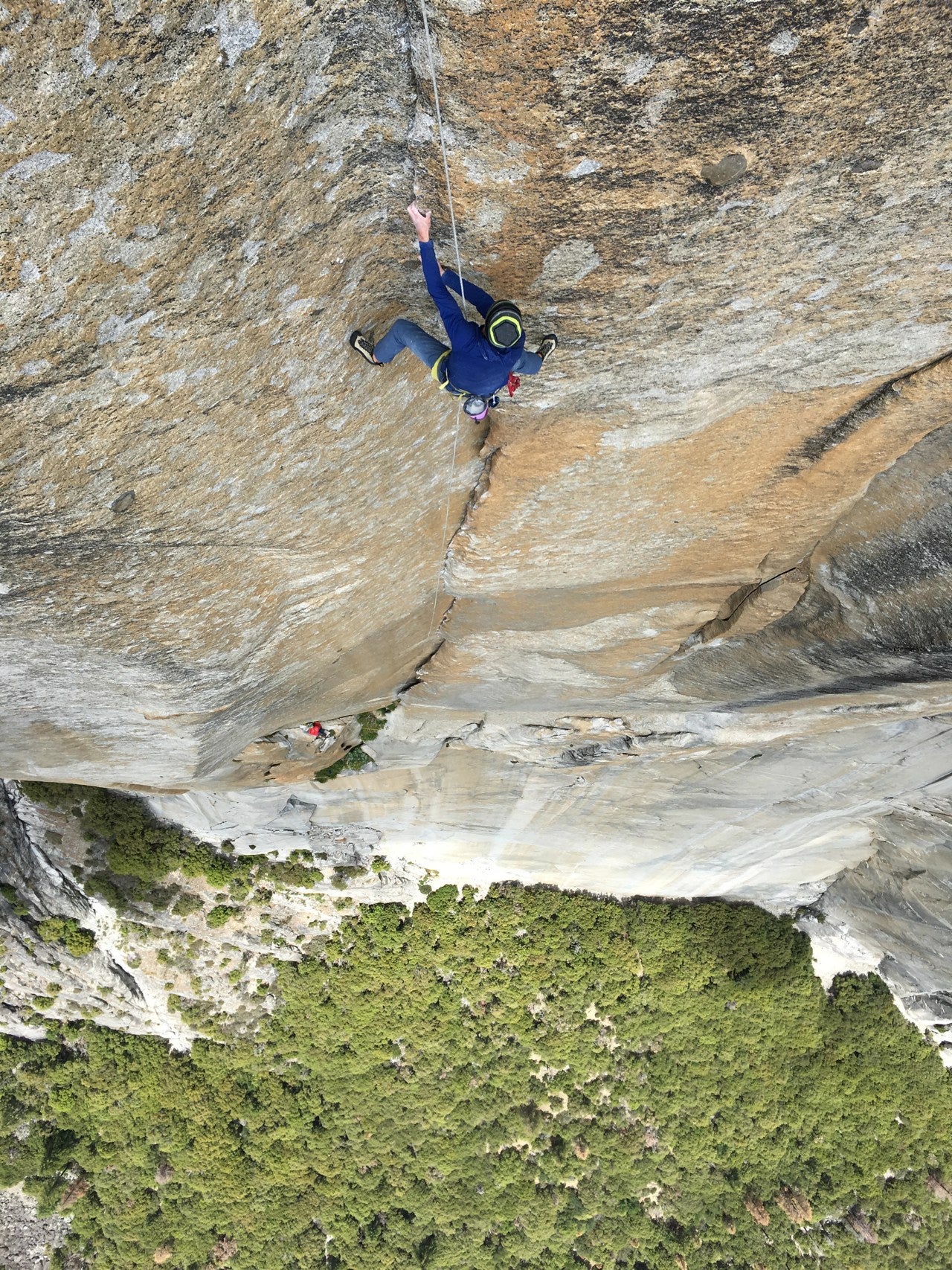 Unglamorously, we began by French-freeing and aid climbing, the search for free climbing possibilities was off the ground. As we gained the anchor of the third pitch, our doubts grew.

“Climbing!” I shouted up. The first to climb, I was … nervous. The unknown, the pressure to rise to this route, and the delicate rock face were all weighing on me and my TC Pros as I tried to stand on the exfoliating rock. Partially shedding the anxiety, I grabbed the largest flakes, thinking to myself how they resembled Lay’s potato chips. And yes, they certainly did: They broke.

Again and again, the exfoliating potato chips gave way and I was sent swinging into the abyss, into Never Never Land. “This is fucked! If we keep trying, there will be nothing left!” I shouted up to Mason.

I pulled my way up to the anchor and we gazed around searching for other possibilities. To our right: it was steep and appeared less featured. To our left: some lower-angled rock with what appeared to be a large quartz dike stretching from a large corner, connecting to the upper pitches of our route. Could this giant snake of rock connect us to the upper pitches of the route? Like Peter’s Lost Boys, we had given over our faith to this giant stone and were not going to give up our dreams so easily. 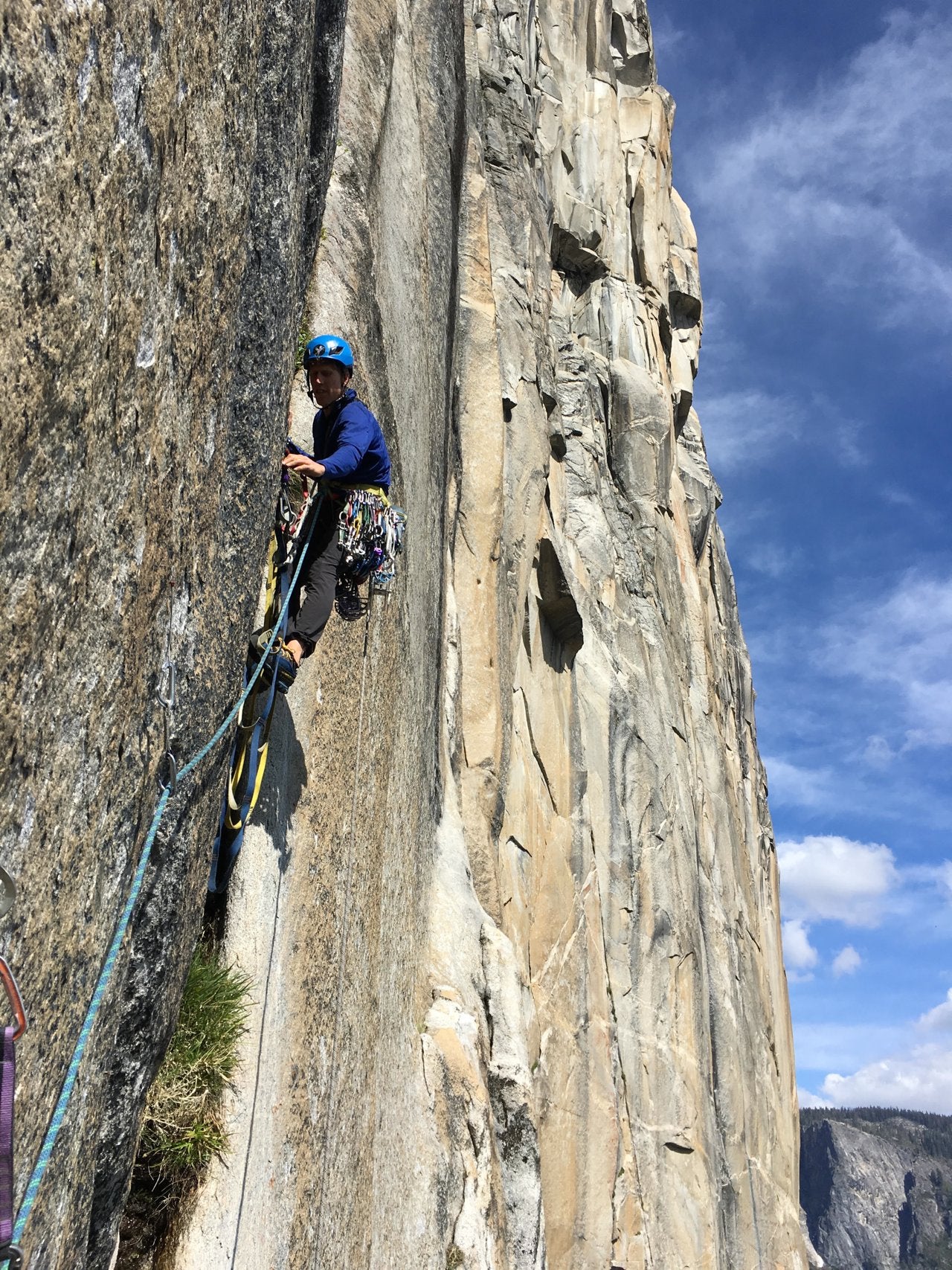 We rappelled down to get started. Realizing we didn’t have the wide gear it required, we diplomatically settled on a leader with a high-octane game of rock-paper-scissors, the end of which saw me racking up and heading toward the chains.  With a timely bolt placement, we were allowed to work on the traverse moves. What seemed attainable was just out of reach, even for Mason’s 6’1” frame. The Lost Boys were at an impasse.

The next day we searched lower for a path of holds, which we found! We were high... as kites. The dike was reachable. The fact that its guardian was insecure 5.13 slab climbing gave us only the slightest pause before we made plans to charge up the route and get to work.

The routine began. We would meet at 7:30 a.m., pack gear and hike to the base. The routine also included the inevitable onslaught of reality—a reality that, as Lost Boys, we hadn’t expected. We would find a path of holds for 100 feet, only to get stopped by a 10-foot blank section. Days swiftly turned into weeks of exposure, fear and seemingly wasted efforts. Progression slowed and we would lose a day’s worth of bolting and effort. Over and over again we drained our optimism into El Cap, and over and over again the scale of the effort defied our carefully planned formula of achievement.

Working ground-up, it had taken us two weeks to establish three pitches of free climbing.  We were humbled. 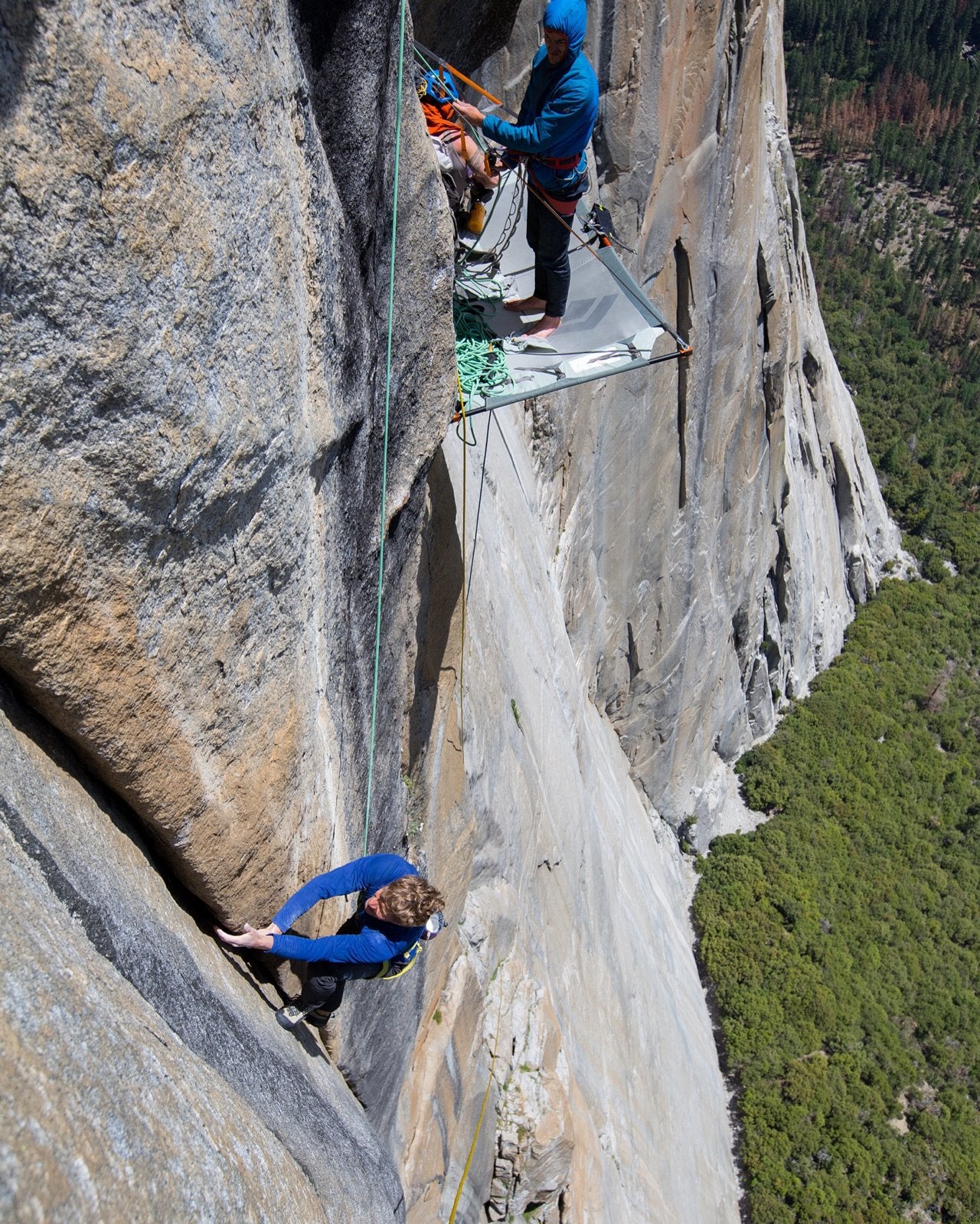 Mason and I had put in an enormous amount of effort with little to show for it. One day, while resting in El Cap Meadow, I laughed to myself thinking that an ant could run laps up and down the wall before we were certain about 10 feet of free climbing.  We had 2,400 feet of wall left to figure out and I was beat down both emotionally and physically. I had no formula for this experience, and I felt crushed.

Our pure-of-heart, ground-up effort was not producing, so we decided to aid the rest of the route in a continuous push to look at the rest of the wall. This would give us an idea whether the remaining 2,400 feet would be climbable, or if the Lost Boys were just a bunch of brats who didn’t want to obey their bedtime.

For this push, we did get to bed on time and began our work at 6 a.m. For the first eight hours we made fair time, until we got into the nerve-wracking aid climbing. The sun came and went, leaving us six pitches below the summit of El Cap in the dark. 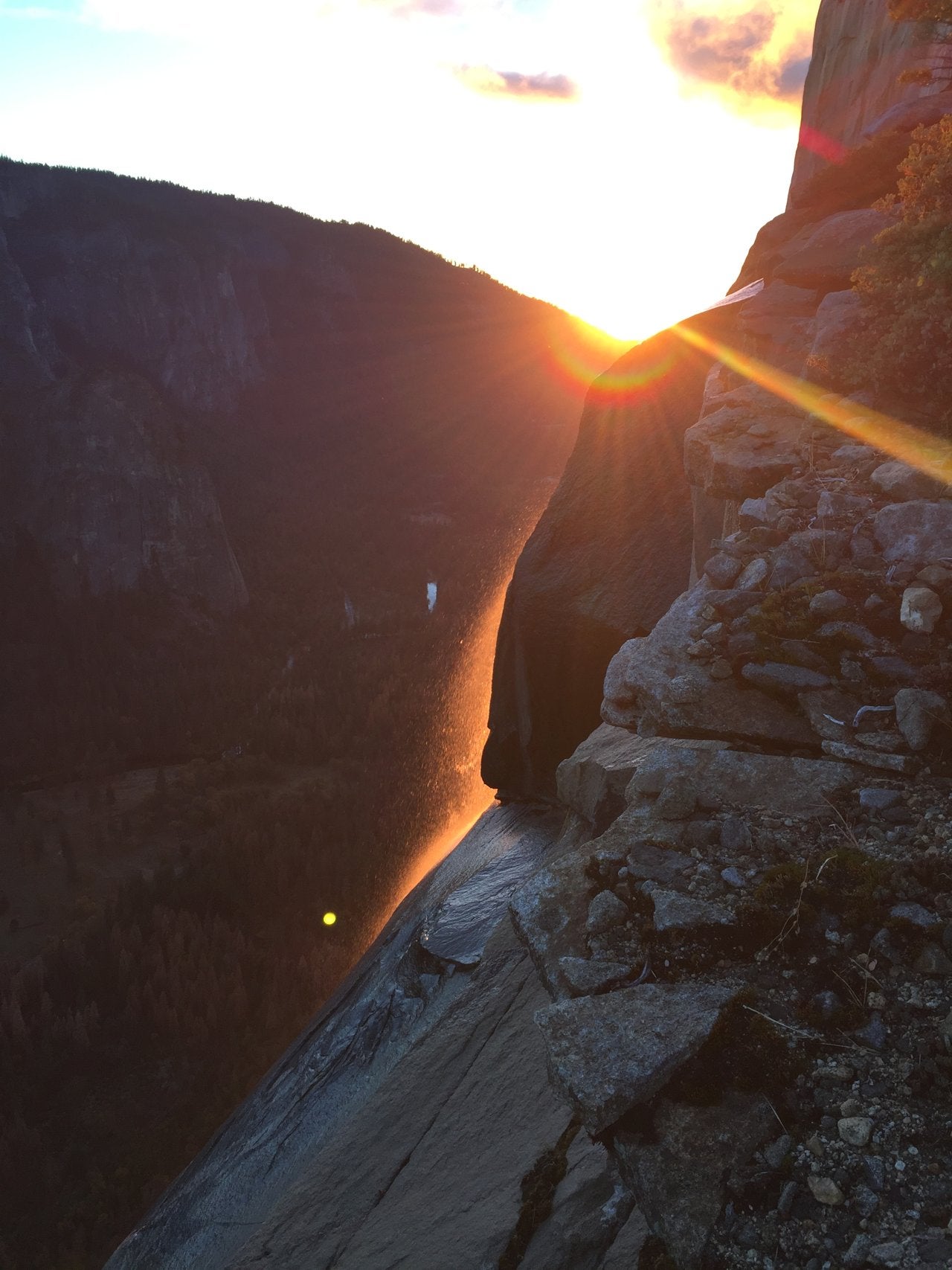 On the last pitches, we got off route. It was a rivet ladder that even Mason could not reach between. “André The Giant must have put this up,” he yelled, including some colorful language for emphasis. I looked up and laughed as my headlamp illuminated him putting his impressive arm span to use.

It was 2 a.m. when we gained flat ground on the summit, exhausted. Below us were 20-something pitches of beautiful free climbing. And in front of us is the colossal and humbling task of rising to it. It will be uncertain, adventurous and trying, I know—and that’s exactly what I was hoping for. In the immortal words of Hayden Kennedy, we may have a “magnificent failure” or success. And I am fine with either.