You've Heard Of Ghosting A Party—But Have You Ghosted A Canyon? 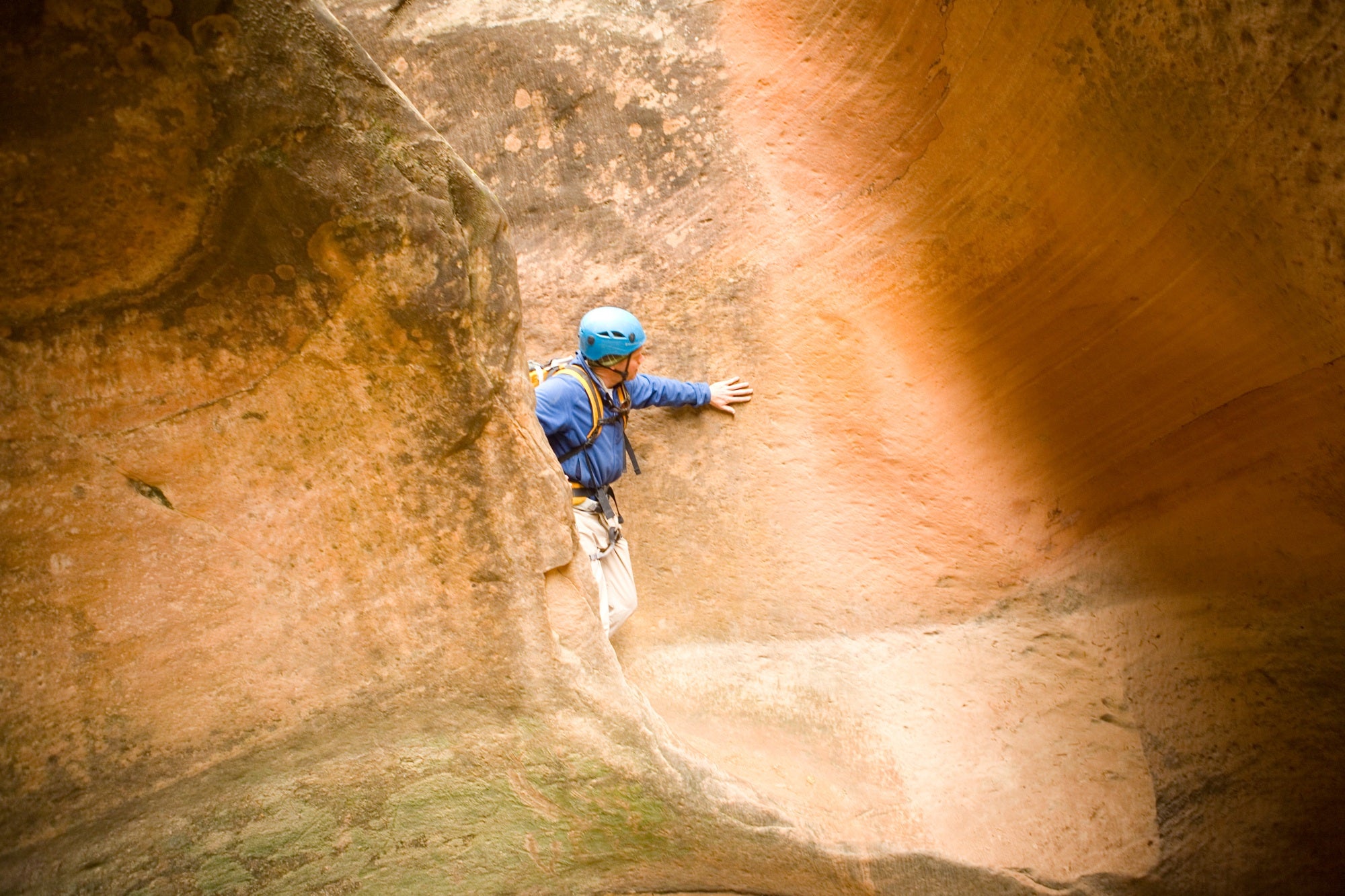 Before this trip, I had never heard the individual wingbeats of a turkey vulture. The raspy whoosh, like someone beating a long-bristled broom, bounced off the canyon walls. Seven of us sat in the sand in an officially unnamed canyon on the south side of Lake Powell, about to rappel in. Below us, a canyon unfurled, the cross-bedded Navajo sandstone twisting out of sight. We were alone for miles in any direction, without even evidence of anyone else. It felt like we were the only people on Earth.

When you think of wilderness, what picture floats into your head? Is it a windswept meadow beneath a mountain range? A lush forest, with moss clinging to trees and rocks? Or perhaps a sea of slickrock, dotted with the occasional stunted juniper, quiet enough to hear the raspy wing beats of a turkey vulture?

Regardless of the setting of your ideal wild place, there is something conspicuously missing from that image: people. This seems so central to the idea of wilderness that the United States Congress even included it into the 1964 Wilderness Act:

“A wilderness… is hereby recognized as an area where the earth and its community of life are untrammeled by man, where man himself is a visitor who does not remain…..without permanent improvements or human habitation….” The concept of wilderness is central to our ideals as an outdoor community. 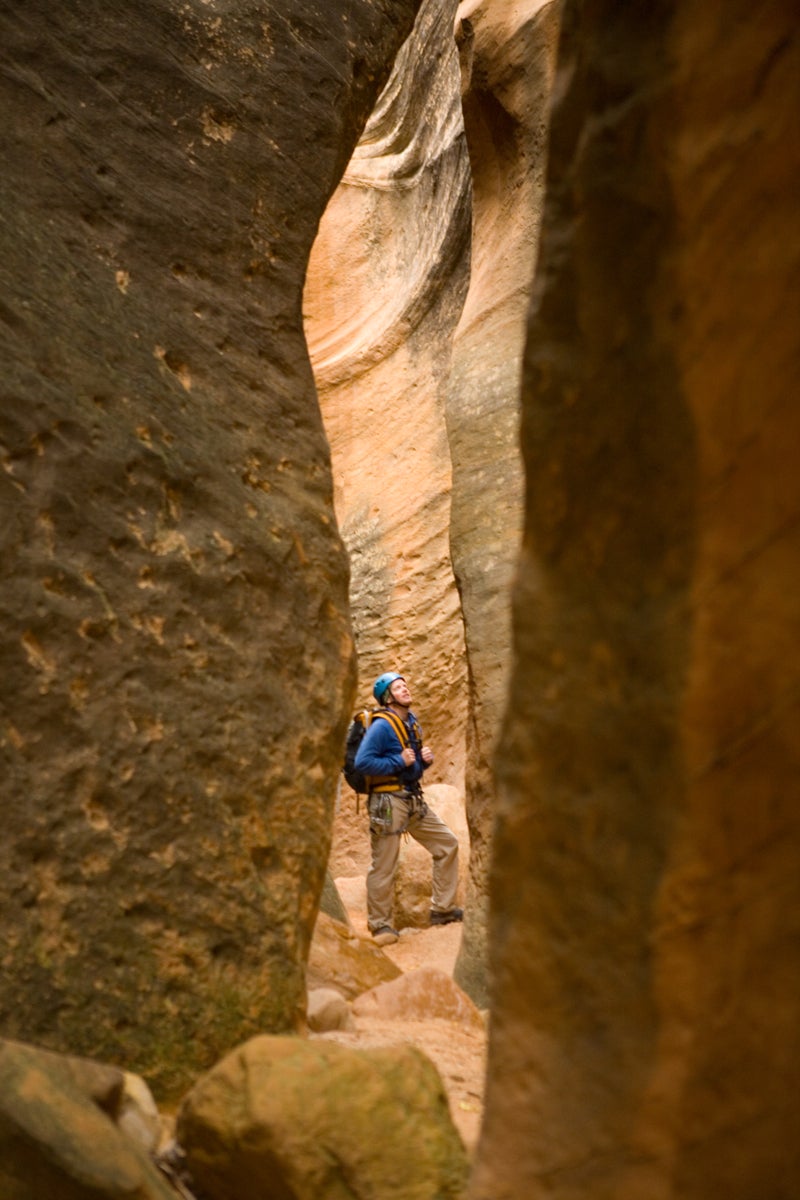 But despite our best intentions, we often alter the places we go. It’s a compromise we all deal with, because exploring amazing places without leaving a trace is just a bit more challenging. Leaving that canyon by Lake Powell just how we found it, so other people could also have a sense of wilderness? It would take a bit more work than regular canyoneering—let me tell you about ghosting.

You may have heard someone talking about ghosting a party—leaving without saying goodbye, slipping out without anyone noticing. Well, there’s a version of that for canyoneering. Normally, while descending a canyon, canyoneers thread ropes through bolts or use webbing wrapped around natural features, like trees or chockstones. Instead, ghosting a canyon is descending a technical canyon with out leaving anything, as if only ghosts passed through. The ghosting ethic extends beyond the challenge of natural anchors in a canyon, which itself can add risk and challenge, as anyone who’s rappelled off a half-buried cairn can tell you.

Still, nylon slings eventually become trash, and tend to multiply into rats’ nests. Ghosting elevates canyoneering beyond “hike-apelling” into a sort of extreme practice of leave no trace, with the ingenuity of aid climbing. It has forced the canyoneering community to come up with ingenious techniques and equipment to live up to the standard of ghosting a canyon. Just the way the clean climbing revolution forced climbers to invent ways to protect themselves without hammering pitons into the rock.

When ghosting, each party gets to feel as if they are the first humans to visit. No slings or bolts to crowd out the sense of wildness. The canyons stay as nature created them, and each party gets to experience the same level of adventure as the first party. Besides, there’s nothing more adventurous feeling than rappelling off a bag full of water.

What if ghosting extended beyond the mouth of canyons, and into the rest of our lives? We live in an era of constant documentation which leaves few rocks unturned, and few locations unshared, which only increases accessibility and traffic, and therefore impact. Maybe we should leave a few canyons like ghost stories, to be shared only by word of mouth, or even just cryptic topo lines and a waypoint, left for the intrepid few to confront on their own.

As with every ethic, it’s not appropriate everywhere all the time. Sometimes slings, or even bolts, are necessary. Not all canyons should, or even can, be ghosted. As with every ethic, there’s a lot of grey area, and a spectrum of appropriateness.  Still, I think leaving some blank spots on the map—and some canyons still looking untouched—is a pretty nice idea.