7 Tips for Staying Organized on A Climbing Road Trip 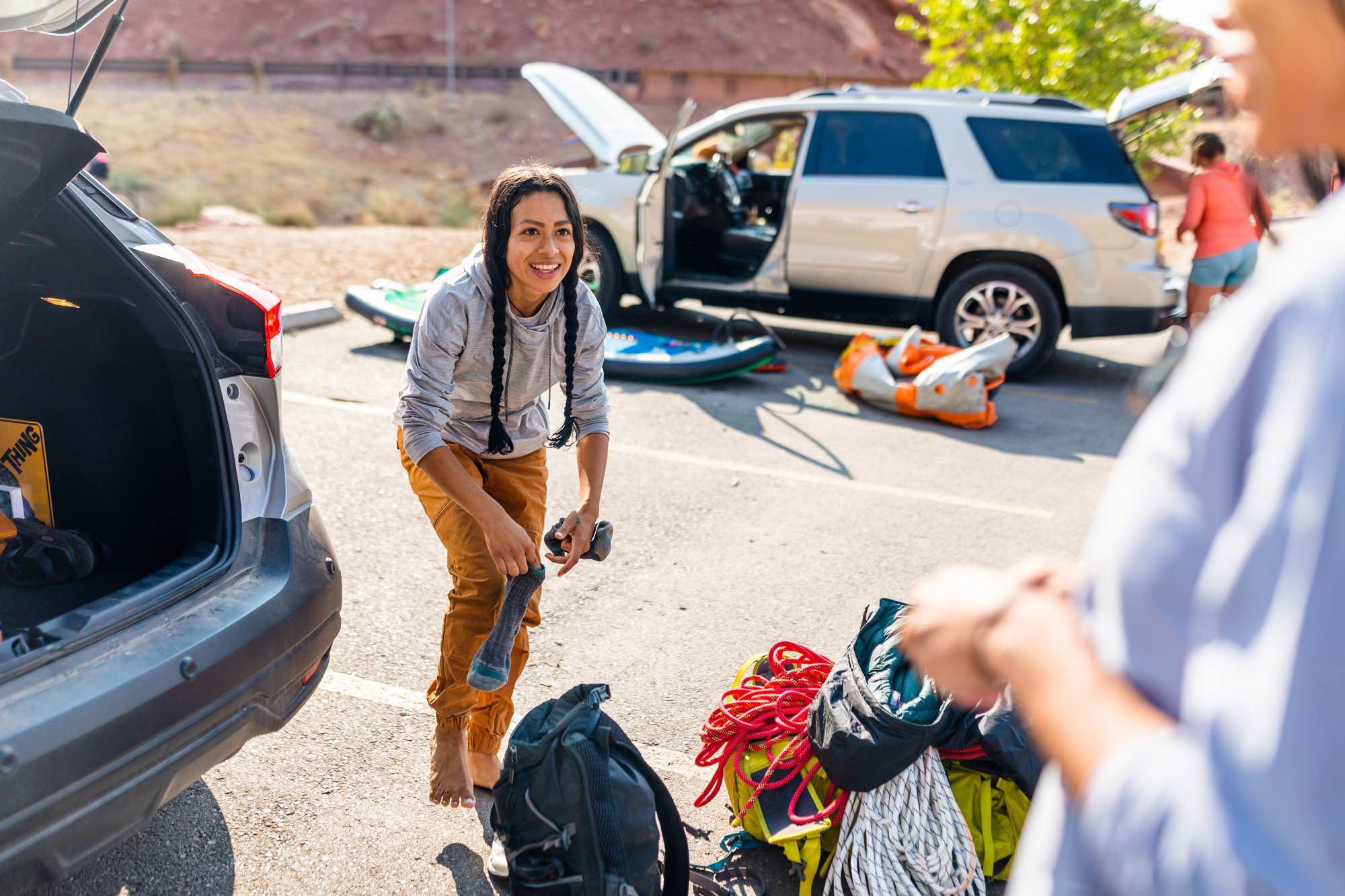 How to pack so your stuff won’t drive you crazy.

We’ve all had it—that “I know it’s in here somewhere” moment. It usually comes while digging desperately through a tangled pile of clothes or climbing gear in the back of a car. After a few days of road tripping, it’s easy to lose track of items. If you don’t put a little time and thought into keeping order, things get scattered. To get ready for this climbing season, we reached out to Nik Berry to get some tips about staying organized on the road. He lives out of a van as a pro climber—but for a time his climbing trips were all in a Toyota Echo. If you don’t know what that is, Google it. It’s, like, the smallest of small cars. Here’s what he learned.

Strategize about where you put things—it’s worth playing some packing Tetris at first.

Last-minute packing can lead to scattered gear. By taking a little time to think through what items you’ll need when—and organizing accordingly—you’ll save yourself time rooting around in the trunk of your car. The key here is prioritizing.

“If I'm going sport climbing, then my aid ladders are the farthest thing from being accessible,
Nik says. “I'm not going to be needing sky hooks. Hopefully.”

He applies the same theory to everything else in the car, too: “I look at what I’m going to need to be the most accessible, what the least accessible, and make sure I have everything sort of in that order,” he says. That means, for example, the cooking setup is easy to access while the laundry items are stashed away. A little planning goes a long way.

Always put things back in their proper place right away.

This sounds basic—but it’s powerful in practice. “Even if you're an unorganized person, you have to be organized because there's no extra places to put your shit other than where they belong,” Nik says. “There's no, like, ‘Oh I'm just going to leave my clothes on the floor.’ Because you're like, ‘Oh I have like a four-by-four square foot floor area.’ You don't have the option.”

That’s why Nik has learned that each item has its place, and when he’s done using it, it goes right back to that spot. Immediately.

Tidy up according to your climbing schedule.

Nik plans his road trip housekeeping according to the type of climbing he’s doing. “If it's bouldering or even sport climbing where your days are a little less full, you have a morning and an evening,” he says. “You can take that time to cook breakfast and then you can clean up after yourself and have more of a normal ritual, as you would at home.”

Don’t waste those rest days, no matter what type of climbing you’re doing.

“Usually when I rest, I take that time to clean and get everything put back and do laundry,” Nik says. “That's when all my domestic things happen.” That way, heading into the next climbing objectives, he can enjoy the relaxing feeling of having the car in order and all his gear in its proper place.

Speaking of laundry, one easy way to keep your dirty and clean items separate but organized is to use an aptly named Dirty/Clean Bag. It’s a dual-entry bag that has separate compartments labeled “dirty” and “clean,” so you don’t even need to bring a separate bag for your dirty clothes. As the clean side grows smaller, the dirty side expands. No need for using grocery bags or bursting Ziplocs for your smelly climbing kit anymore!

Use dry bags whether you’re backpacking or not.

If your climbing trip involves any backpacking or overnight climbing trips, dry bags can serve double duty. Store your climbing gear in them in the car—and also on the trail. Dry bags are also a perfect portable storage solution for clothes, if you don’t have built-in storage in your car like Nik does in his van now.

Bonus tip: “Dry bags are actually really dope for washing clothes in the backcountry,” Nik says. “You just throw all your clothes in them and pour soap in them, and you can wash your clothes really easily. And you can actually do dishes that same way, and you use less water if you're in the water-restricted area.”

In a word: minimize.

“I think most people over pack,” Nik says. For example, he recalls packing several pairs of pants—both climbing pants and casual pants—for a climbing trip to Europe, and then realizing a month into the trip that he actually was only ever wearing one pair.

“Just pack minimally,” he says. “It'll make your whole scene way more enjoyable because you won't be packed to the brim. If you over pack, you're just creating way more difficulty for yourself, because you're going to have to unpack more to grab the stuff underneath, and organizing is going to be way more of a nightmare.”

Pack like you’re getting on a plane, even if you’re driving.

One way to help keep your stuff under control is to pack for a road trip the way you would pack for a flight. Aside from going minimal in the first place, using compression sacks can also be a big help. Nik likes the kind that allow you to purge air from inside, compressing everything down to take up less space. Which is especially useful in vehicles like, say, a Toyota Echo.

In the end, a little effort and a few compression sacks and dry bags can go a long way toward keeping your stuff orderly and minimizing the tidying you’ll need to do on your rest days. So you can, you know, actually rest. Or do other fun things aside from cleaning your car out on one of your vacation days.