Anatomy of A Send 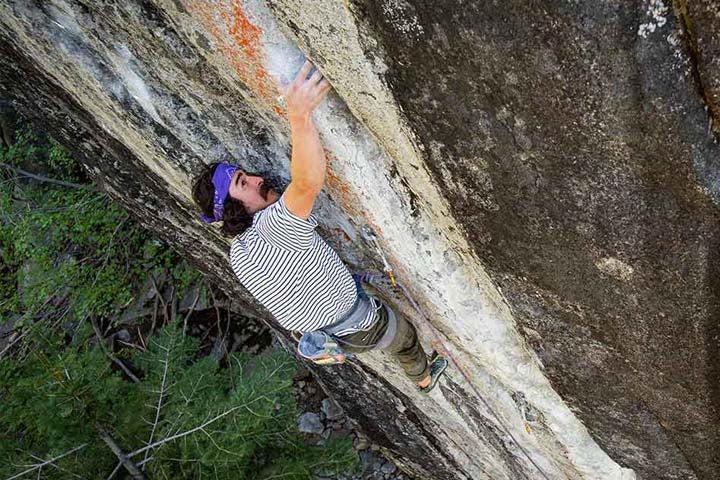 Keenan Takahashi breaks down how he unlocked Empath, 5.15a, in Tahoe.

If genius is only, as they say, 1% inspiration—the rest being “perspiration,” or hard work—that seemingly tiny 1% has pretty oversize influence, right? But maybe it was that 1% that tipped Keenan Takahashi over the edge for his send of Empath, the new 5.15a sport route in Tahoe.

“​​Empath was far and away the first project I'd been actually really, really psyched on in a very long time, in probably over a year, where I'd been on that level of obsession,” Keenan says.

First spotted by Jimmy Webb and bolted by Carlo Traversi (who also did the first ascent in October, 2020), the line is “super pure,” says Keenan, and the rock quality “insane.” (In Carlo Traversi’s words, the “best piece of rock he’s ever climbed on.”) After a lull in motivation during the first year of the pandemic, Keenan was hooked on Empath from the moment he saw it—but then, of course, came the rest of that 99% hard work. And with it a few big lessons.

A unique set of moves

“The route is not super long, and it's mostly compression climbing, and it's definitely not your standard sport route,” Keenan says. And none of the climbers who were working the route while he was were based in sport climbing either, he says. Most of them have a bouldering background.

“After four days on it, I was like, ‘I feel like I could do it, but it's going to be like five years,’ ” Keenan says. He worked out the moves, linking it together in two overlapping sections. Then a surprise storm ended the season prematurely. Keenan was bummed to be delayed, but happy to have his fire for climbing back. “I feel way more like myself than I had since the pandemic started,” he says. “It really was like this return to my obsession with climbing.”

With his project covered in snow, Keenan’s obsession still burned—so much so, he changed his approach to training, aiming to be in the best shape of his life when he came back to Empath in the spring.

For the first time in his climbing life, he worked by the numbers and kept track of everything. Hitting the gym, he’d count pull-ups and note how much weight he was adding—the kind of non-climbing workouts he’d never spent much consistent effort on before. And it helped, he says.

The key to his continued motivation was being able to see his progress in a concrete way, he says. So when he struggled with a certain weight in the gym, he could compare his notes and see that even though it felt difficult, he was actually working with a heavier weight than he had before. “I have this actual, numerical, quantifiable gauge to be like, ‘This is more, therefore I'm doing better.’ ” he says.

When in years past he would have gone home feeling discouraged because his workout had felt difficult, he was able to recognize that even though his perceived exertion was high, it was actually paying dividends in new strength.

“That's been super huge for me, honestly,” he says. “I did my first one-arm pull ups, and I was super psyched.”

When spring rolled around, he says, people he talked to said conditions wouldn’t be right until May—but he wanted to see for himself. It was something he would have done when he was younger, he says, but climbing with stronger climbers in the past couple of years, he’d mostly defaulted to their opinions. Instead, this time, he bought snow shoes and a snow shovel, pulled on his ski kit and took his pup with him to check it out for himself.

“That was pretty empowering,” he says. He found the route itself was actually mostly dry, and went to work shoveling the snow off the top to stop it from melting and seeping down the route. After a bit of waiting, he set the draws and was ready to get started—all in mid-April, weeks before other climbers had said it would be ready.

The next six weeks, Keenan climbed exclusively on Empath—the most focused effort he’d made in a long time, he says.

“It got very mental,” Keenan says. “Which I think is something that's common with sport climbs. But having not done it enough, I wasn't necessarily prepared for it.”

On his third session, he broke a hold on the hardest move on the route—making it significantly more difficult. He struggled with days of regression. Seven sessions falling at the same move, trying different beta. At one point, he figured he just couldn’t do it, which felt bad for how much effort he’d put in.

'Anything that happens on the physical plane must first happen on the mental plane.’

Living near the route and focusing solely on it, Keenan found himself constantly ruminating on it—it took over his rest days, too. He obsessed over his waves of progress and regression on the route. After weeks of trying out different beta, figuring out what to commit to, watching video of himself to help him work out specific moves, he came to a big conclusion: “I think that a lot of times I kind of hosed myself with my confidence, or lack thereof.”

He explains. “That's something I've been really trying to work on, is believing I can do something. I feel like I don't believe I can do something until it's already basically there. Whereas I think a lot of my friends who are really good at climbing believe well before it’s obvious that they can do it. I have to be at the obvious stage—I think that really holds me back.”

Keenan takes inspiration from the 1970s book “Creative Visualization,” that he scrounged from his dad’s garage. “The best mind-opening line in it for me was, 'Anything that happens on the physical plane must first happen on the mental plane.’ ” he says.

In the end, Keenan found that tuning into his own style of climbing—bolstered by his newfound strength and power from training—pushed him over the edge. After over-analyzing how long to rest on one specific move and picking apart how to be efficient, he found himself feeling exasperated. “There is a side of me that was like, ‘Sport climbing is not supposed to feel necessarily super hard on the wall—I'll still try hard, but it's not supposed to be forcing it. It's supposed to be this flowing thing.’ ”

Out of frustration, he ignored the plan he’d made, and instead said, “Screw it, I’m just going to go into bouldering mode.” Yelling through most of the sequence he’d been struggling on, he pumped up his adrenaline and ended up finishing the rest of the route in a much more powerful, controlled way than he imagined he would. It felt out of the blue, he says.

Following the odyssey of climbing Empath, Keenan is psyched to see where his hard-won newfound strength and knowledge will take him.

Editor’s note: You may have noticed in the photos of Keenan on Empath, he’s wearing corduroys. We’re excited to announce that we’re collaborating with Keenan to make an all-new pair of climbing corduroys, coming soon.

“I don't like pants that look like they're climbing pants,” Keenan says. “I want a pant that looks like it's just a pant, but that you can climb in well. We've been working on designing something that I think looks good, and also climbs well—and I really like what we've gotten so far.”

Stay tuned for more about our collab with Keenan.