Ask The Expert: Climbing During COVID 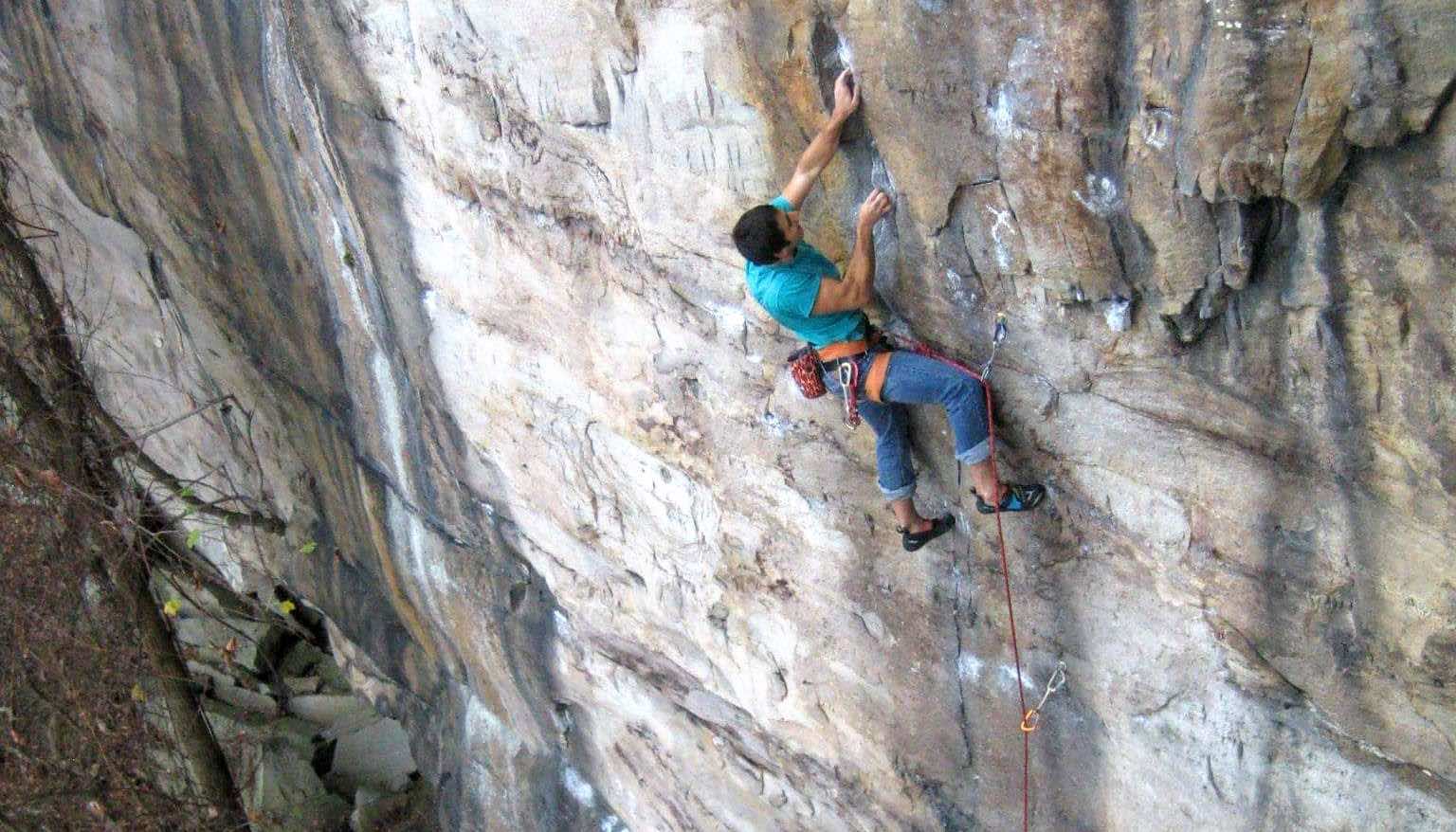 With rock climbing, knowledge often equals safety. The more we know, the more we’re able to make safe decisions. But what about during a pandemic? We opened the floor on our Instagram account for readers to submit their questions about climbing and COVID-19. Then we sent the questions to an expert. Bryan Brown is a climber and researcher at the Center for Global Infectious Disease Research at Seattle Children's Research Institute where he studies how bacteria and viruses affect human health. Here’s what he said.

Q: How long can viruses survive on various rock surfaces?

A: We don’t know exactly how long SARS-CoV-2 (the virus that causes COVID-19) might remain viable on various types of rock, but we do have some information about its viability on other surfaces.

The half-life (the amount of time it takes for half of the quantity of viable virus to inactivate) of the virus in aerosols and on various surfaces, from copper to plastic, ranges from about 1-7 hours, with viable virus being recovered from plastic surfaces up to 3 days after application (though the amount of virus is greatly reduced) (1).

Temperature also seems to have a pretty significant effect, with higher temps greatly accelerating viral inactivation (2). All of this is to say, it likely doesn’t last as long on rock due to fluctuations in environmental conditions and potentially considerable UV exposure. So, conservatively, we might ballpark this at about a day, though variables such as sun exposure, temperature and other environmental factors may shorten this to just a few hours. It’s also worth noting that the ability to recover a virus from a surface, as was done in these studies (via soaking the surfaces in a special solution designed to transport the virus), does not necessarily reflect the potential to pick up the virus via casual contact.

Q: How does chalk affect the virus?

A: Much of this perspective is speculative, since there’s a dearth of data on the effects of chalk on SARS-CoV-2.  But chalk (even the really fancy stuff) is mostly magnesium carbonate, which has actually been shown to have an antibacterial effect on the common skin bacterium Staphylococcus epidermidis (3). However, there’s no evidence that it has any antiviral properties. Chalk is likely to increase the pH of your skin environment when mixed with sweat or water (this pH increase is what is thought to elicit its antibacterial properties), though SARS-CoV-2 has been shown to be rather hardy to a wide range of pH conditions (2), so this effect likely does not translate well to SARS-CoV-2.

Liquid chalk, specifically, has been appointed as a de facto panacea for climbing during the pandemic due to its alcohol content, but it’s not likely so simple. The US Centers for Disease Control and Prevention (CDC) recommend using alcohol-based hand rub with 60-95% alcohol content, and the World Health Organization recommends solutions contain either 80% ethanol or 75% isopropyl alcohol (4). A few quick Google searches show that liquid formulations from Black Diamond and Mammut both contain over 70% alcohol, though I was unable to determine the alcohol content in Petzl and Metolius varieties, and Friction labs clocked in at a modest 45% (though it is vegan, in case that matters to you?).

HOW DOES THE OUTDOOR RESEARCH FACE MASK COMPARE?

I would hesitate to put much stock into liquid chalk protecting you from COVID-19 for a few reasons. First, our hands are pretty dirty when we’re climbing, and the CDC recommends using soap and water, as opposed to sanitizer, when hands are heavily soiled. Second, if someone is actively shedding viral particles on holds or shared surfaces, I’m not sure how much benefit pseudo-sanitized hands will confer by comparison. Third, there is no evidence that liquid chalk, as formulated, does actually disinfect.

One unsaid benefit of more liquid chalk use is that we all may leave the climbing gyms or crags with a little less chalk up our noses. But it’s too speculative for me to comment on how airborne chalk particles would affect aerosols or droplets containing SARS-CoV-2 virions or associated transmission dynamics. So, the short of it? Don’t count on chalk, in liquid or powder form, to protect you from COVID-19 acquisition. 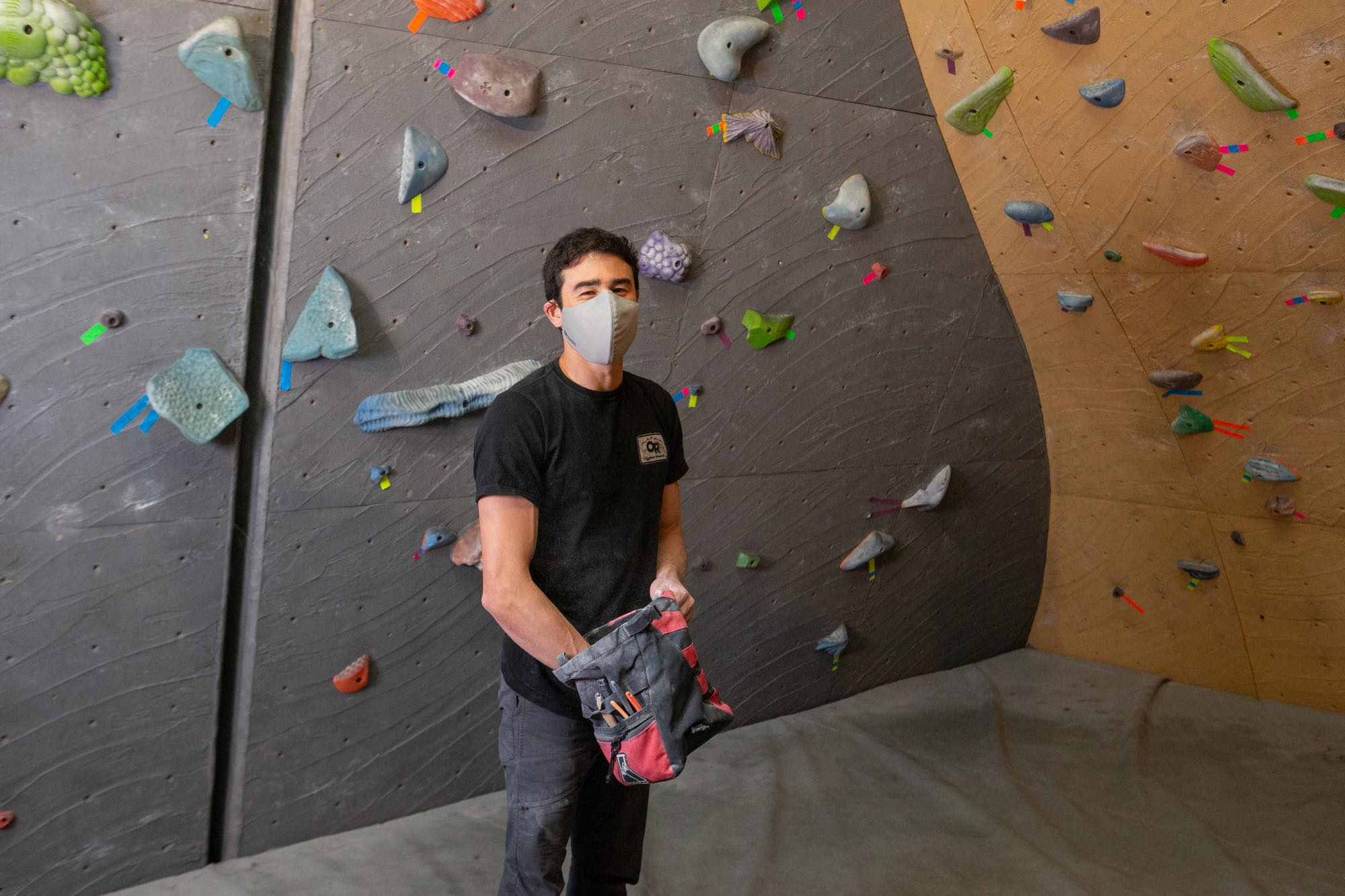 Q: Can COVID be transmitted through rope contact? As in, is it safe to belay a friend who could have it?

A: As I said above, it’s difficult to predict how long the virus may remain viable across various surfaces and conditions. We do know that the virus is detectable on the outer layer of surgical masks (though at about 0.1% of the original concentration) up to a week after exposure (2), so it’s not impossible that it could spread via rope contact. However, I think the best advice in this situation would be to stay home if you suspect that you might be infected or exposed.

Q: Under what conditions does the virus aerosolize? Can you explain that process more (e.g is the rate of transmission higher? Does it require humid conditions or just unventilated space)

A: First, let’s talk about what constitutes an aerosol and what distinguishes that from a droplet. Droplets were originally thought to be the main way people transmitted SARS-CoV-2 to others without direct contact. Droplets are typically defined as respiratory or salivary secretions greater than 5-10um (um=micrometer=micron=1×10⁻⁶ meter) that are expelled when a person coughs, sneezes, or speaks. Given their larger size, droplets fall to the ground quickly (5). Aerosols, on the other hand, are smaller (< 5um) and linger in the air longer, thus expanding the potential range of transmission.

Studies have shown that speaking generates aerosols (6) and that SARS-CoV-2 can survive for at least 3 hours in such states (1). However, while the data underlying these conclusions are convincing, it remains unclear to what extent normal speech has the capacity to produce large quantities of aerosols containing viable virus, as the previous experiments were proof-of-concept. Experiments to confirm or refute these findings over a range of viral loads and aerosolization patterns are currently ongoing. That said, it’s likely that an individual who is infected and shedding virus is able to transmit SARS-CoV-2 to others via aerosols, especially in poorly ventilated areas (7). As always, indoors is more risky than outdoors. It is also accepted that louder talking or yelling generates more particles (8), so maybe keep those try-hard yawps to a minimum.

Q: How safe is it to go back to the climbing gym at the moment, and if I decide to take the risk and climb indoors, what can I do to minimize my COVID risk?

A: This is a good question and probably comes down to how comfortable you are with risk. Undoubtedly, climbing in the gym is riskier than climbing outside, for many of the reasons discussed here. Additionally—and this varies by organization—gyms are sometimes dirty, poorly ventilated places, which are higher-risk environments for transmission. Will you contract COVID-19 if you go to the gym? Not necessarily, but you are taking some risk. If the physical or social aspect of climbing in the gym improves your physical or mental health, then there’s a good argument to be made for weighing the options.

If you do decide to go, there are several things you can do to minimize the risk. These fall generally in line with what public health officials have been recommending for some time.

1) Wear a mask over your mouth AND nose at all times.

2) Wipe down any fitness equipment before and after use.

3) Sanitize your hands frequently during your session.

4) Minimize physical contact with other folks, no matter how badly you miss seeing them.

6) And finally: Don’t lick the holds.

Q: Can COVID-19 recovered folks continue to spread the virus?

A: This is a fantastic question without an equally satisfying response. The short answer is that we can’t say with certainty, but we have some positive evidence to suggest that folks who have been infected and recovered are protected from reinfection for some amount of time.

A study conducted earlier this year using rhesus macaques convincingly demonstrated that animals that were re-exposed to an identical SARS-CoV-2 strain shortly after recovery from an initial infection were protected from subsequent reinfection (9). Of course, there are caveats to this. First, the study was not performed in humans and thus may not translate perfectly; and second, these animals were exposed to an identical strain, which may or may not reflect real-world situations. For reference, we know that several SARS-CoV-2 strains have emerged and it is unknown if protection from one strain translates to another. Third, we do not yet know the durability (eg. length of protection) of the immune response to SARS-CoV-2 infection. Drawing on insights from SARS-CoV, we know that a majority of patients were found to still produce neutralizing antibodies (antibodies that can block a pathogen from entering a host cell) for up to three years after infection (10). However, due to the novel nature of this virus, it remains unknown if antibodies that develop in response to SARS-CoV-2 infection are protective and what levels of these antibodies are needed to prevent reinfection. For now, fingers crossed!

5. M. Meselson, Droplets and Aerosols in the Transmission of SARS-CoV-2. New England Journal of Medicine,  (2020).

7. WHO, "Transmission of SARS-CoV-2: implications for infection prevention precautions."