Away From Screen Life, Into Real Life 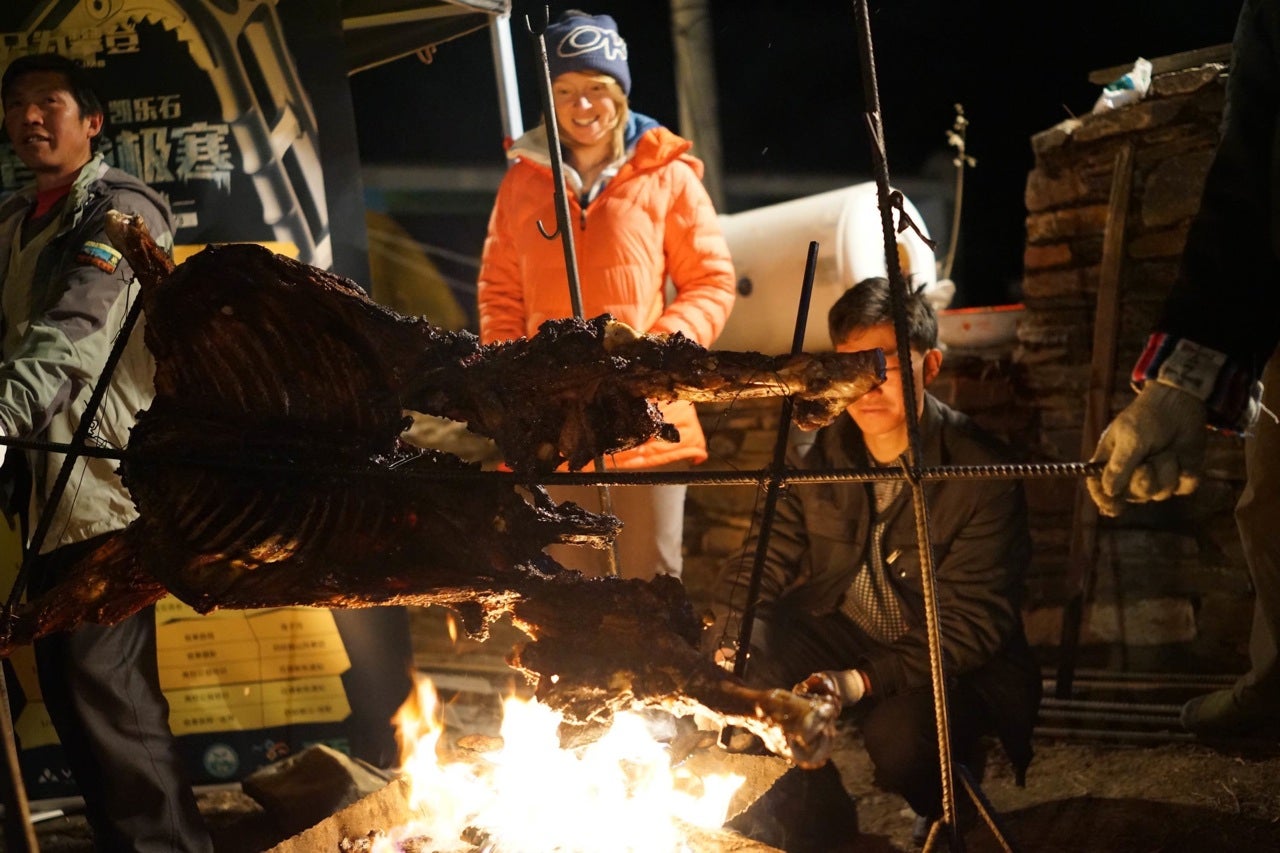 Jewell Lund knew this moment would come, the "Whoa" moment of a decade of life closing behind you. She decided to pass up ringing in her 30s on a barstool, or even ticking off the year with a 30-for-30 challenge. "I wanted to kick off that decade with the curiosity and open disposition that spending time in a foreign culture really facilitates," she says. So she and her boyfriend, Kyle Dempster, packed their bags for ice climbing in Chengdu, in China's Shuangqiaogou valley. And they found much more than ice. 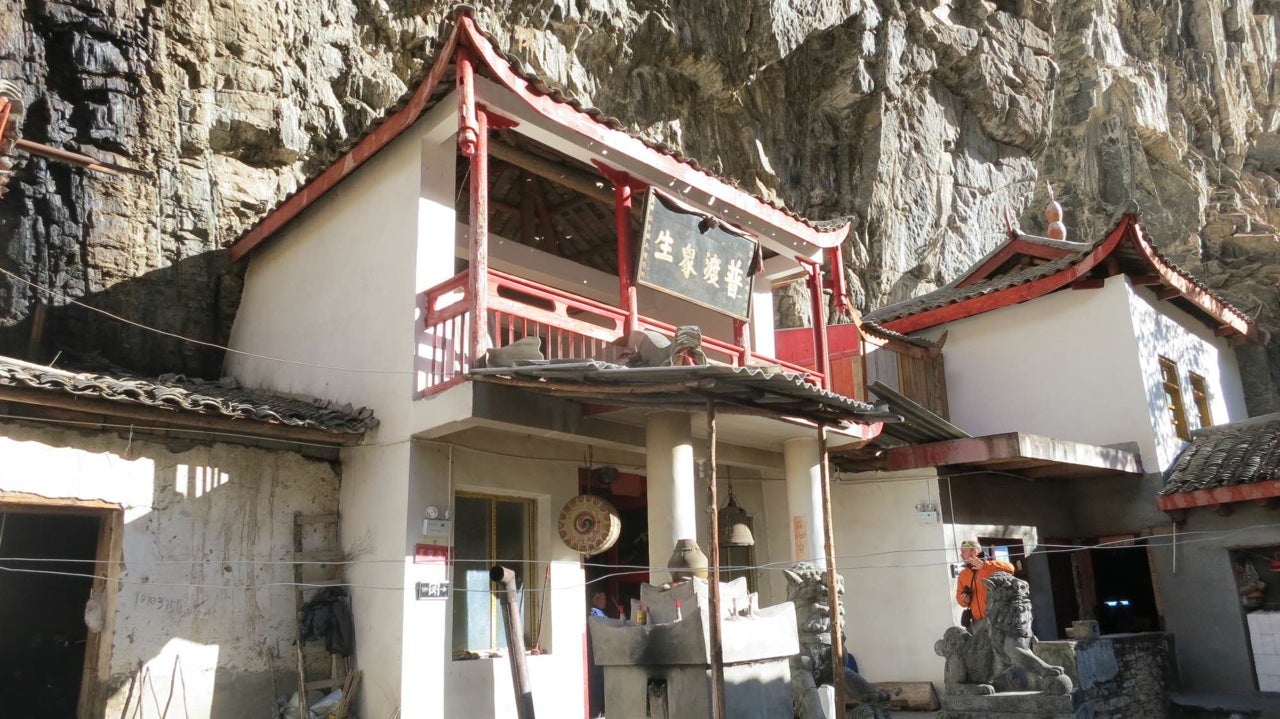 Back home in Salt Lake City, Jewell's days have been revolving more and more around a computer lately. Sound familiar? She's in her first year of a master's program in glaciology. Which might sound badass and exciting, but her day-to-day work involves more math, computer programming and working with big data sets than doing research in the field. Add in trying to stay in climbing shape and keep up her relationships—both personal and professional—and, well, "The long and short of it is, I have bitten off much more than I can chew," she says. "A typical day involves a few classes, interspersed with an hour or two in the gym (I'd really like to keep up some climbing fitness during this program, and gyms on campus really help with that), and then many hours spent in front of the computer—either reading research in my field, or working with data." It rings familiar to most of us, the life cycle that seems to revolve around a computer screen at its nucleus. And sometimes it takes more than a short break to put things into perspective. 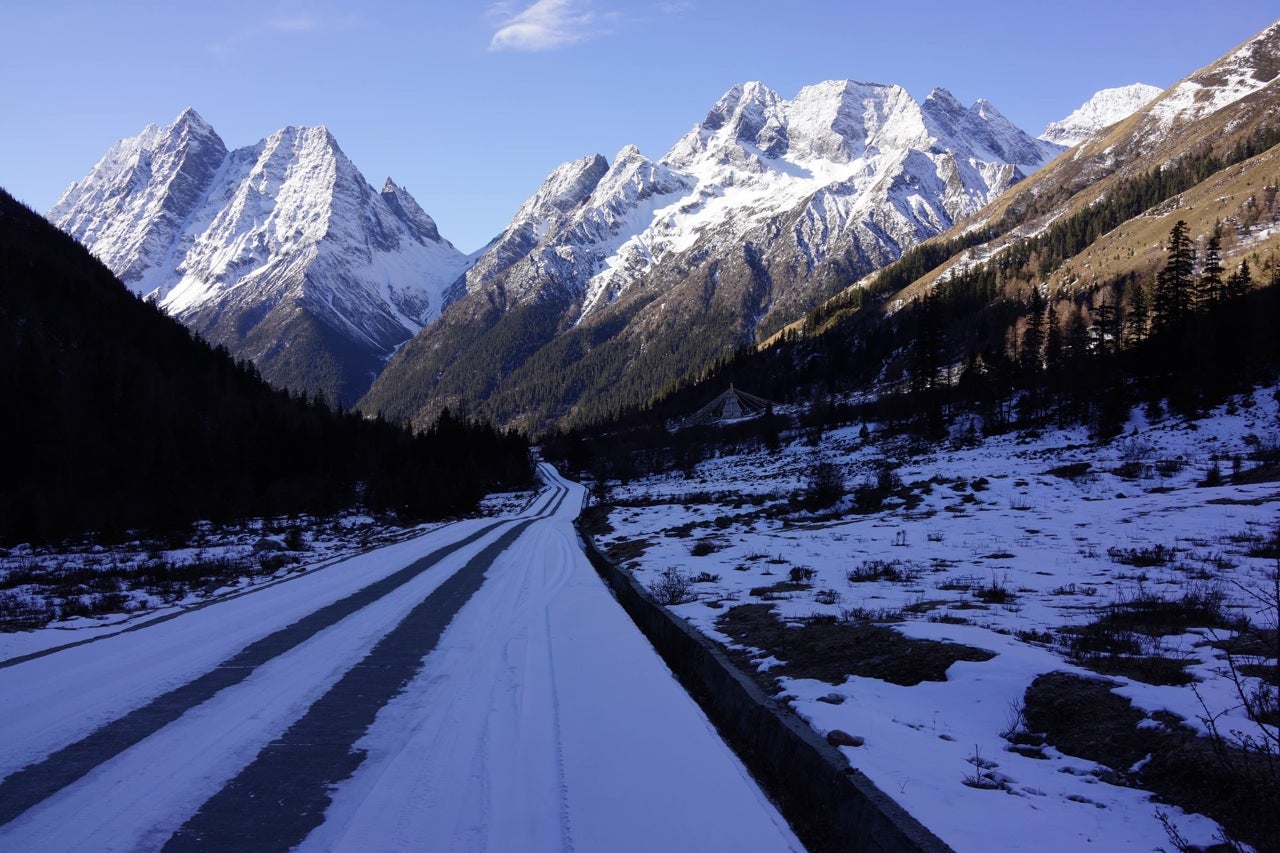 In Chengdu, a city of 14 million in Sichuan, China, a fog of particulate matter greeted them. "It's a pretty bemusing experience ​​to step into fast-paced city life in a foreign country, especially when under the influence of jet lag. There's a general 'deer in the headlights' expression on my face; not only can I not read any written language, but I have no idea how to order food or navigate traffic normalities here. Scooters seem to be small enough that they can intermingle with auto as well as pedestrian traffic, frequently filling crosswalks and sidewalks as well as time spent on the street. It's overstimulating to say the least." They hired a car to take them into the Shuangqiaogou valley, where things seemed to move much more slowly, she says. "Though a national park, the visitation in the winter is not huge." The mountain road from Chengdu has seen several landslides and was damaged in the earthquake of 2008, so it's more of an off-road adventure most of the way, she explains. 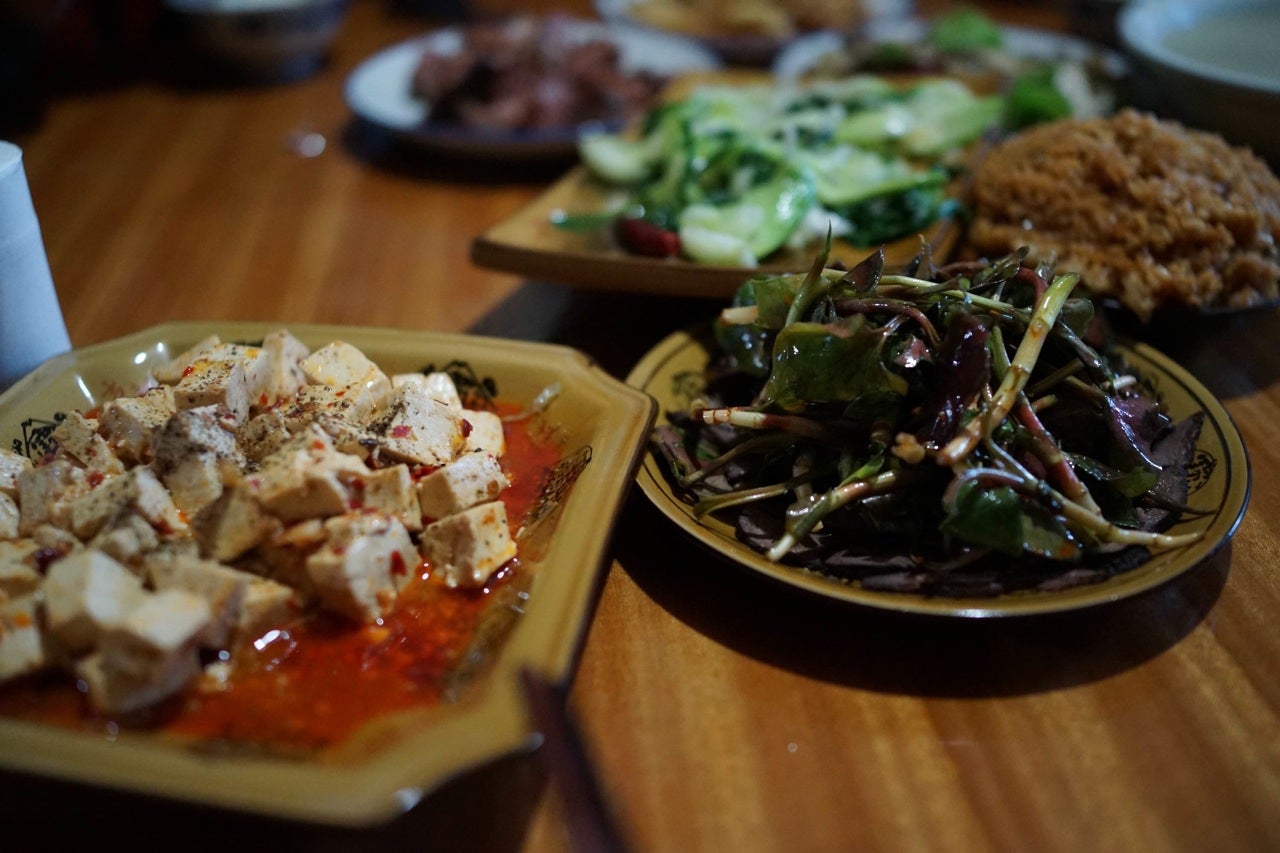 In the village—more a cluster of homes, either those of yak ranchers' or guesthouses built for park visitors—they enjoyed Sichuan hospitality. Read: Sichuan breakfasts and dinners, and hot showers. And up the valley Jewell and Kyle reveled in a unique ice-climbing experience. "It's part of the sub-tropic monsoonal climate regime, so the winter months are the dry season," Jewell says. "At the same time, the valley sits at about 11,500 feet and nearby peaks get up to about 20,000 feet, so it's quite cold. Driving up canyon, you gaze at sheer alpine faces that are pretty much devoid of snow. Every so often, an ice cascade paints a line down one of these mountainsides, some for quite a long ways. When you're inspired, you ask your driver to pull over and tell them when to come back to pick you up, and you're off on your day's adventure. It was absolutely wild to walk up to these frozen waterfalls in my tennis shoes, without any snow around. Such a gift to visit other parts of the world and experience how different the climbing can be." 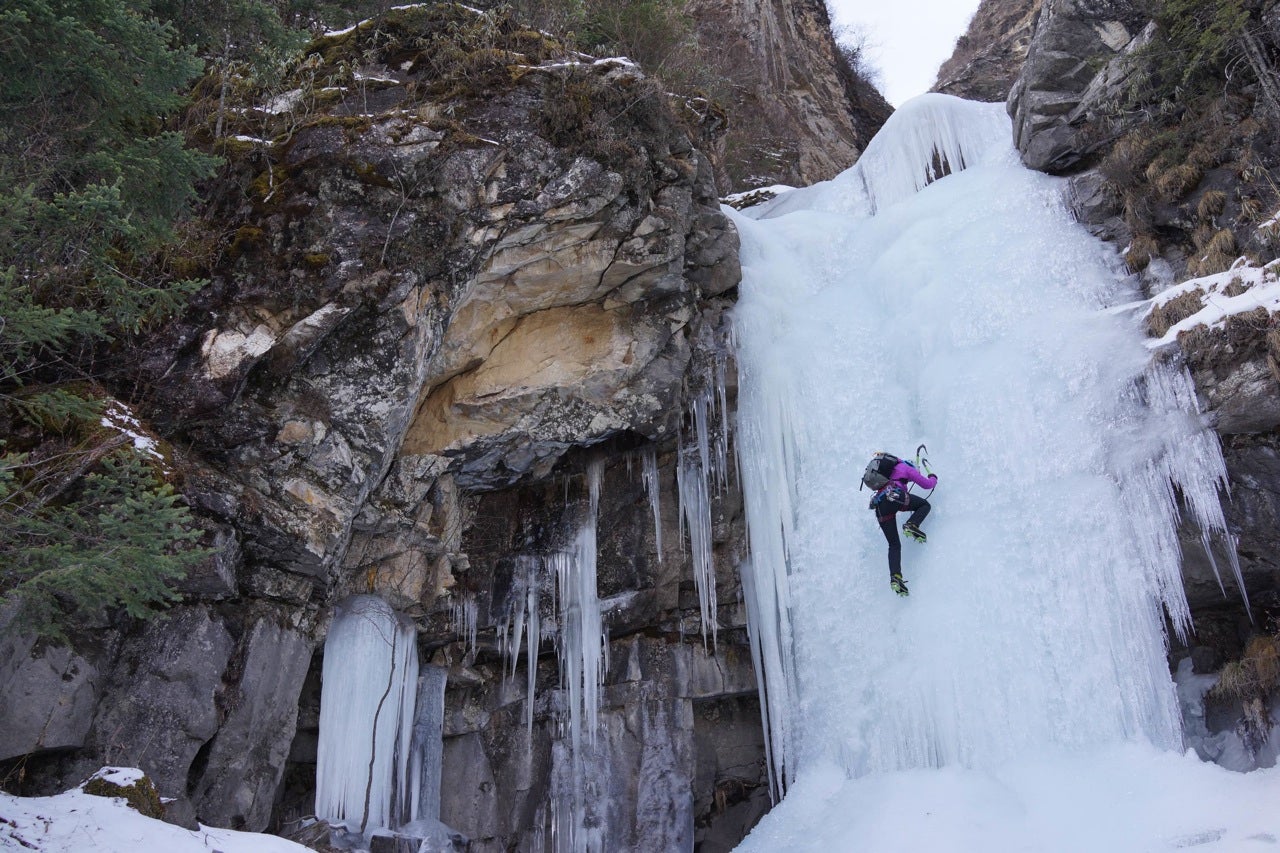 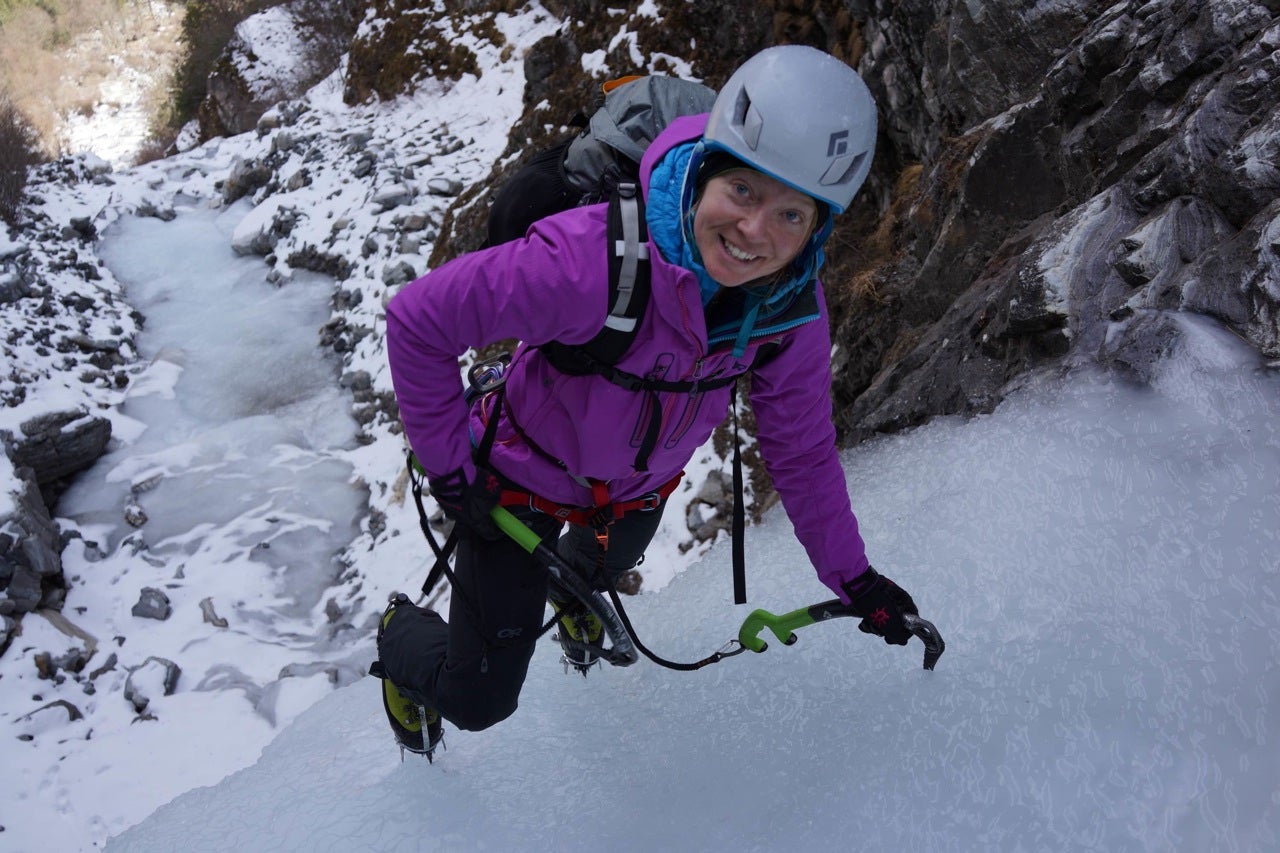 But it wasn't only the climbing that rewarded Jewell's choice to step back from the computer life and into a faraway world. New Year's Eve happened to coincide with the valley's annual ice climbing festival. "These folks got together and roasted a yak over an open fire at the party, and all night long there was a wonderful conglomeration of slideshows and smartphones out capturing this event, as well as the tradition of warm baijiu (Chinese liquor) passed around," she says. The striking thing, Jewell says, was the locals' mysterious blend of deeply rooted traditions—like traditional mountain dances and cooking over an open fire—and modern technology, like smart phones, wifi and flat-screen TVs. "I watched people from this town dance all night long—and not the sort of clubbing one might expect on New Year's Eve, but traditional mountain dances where all of the dancers were performing the same moves together. 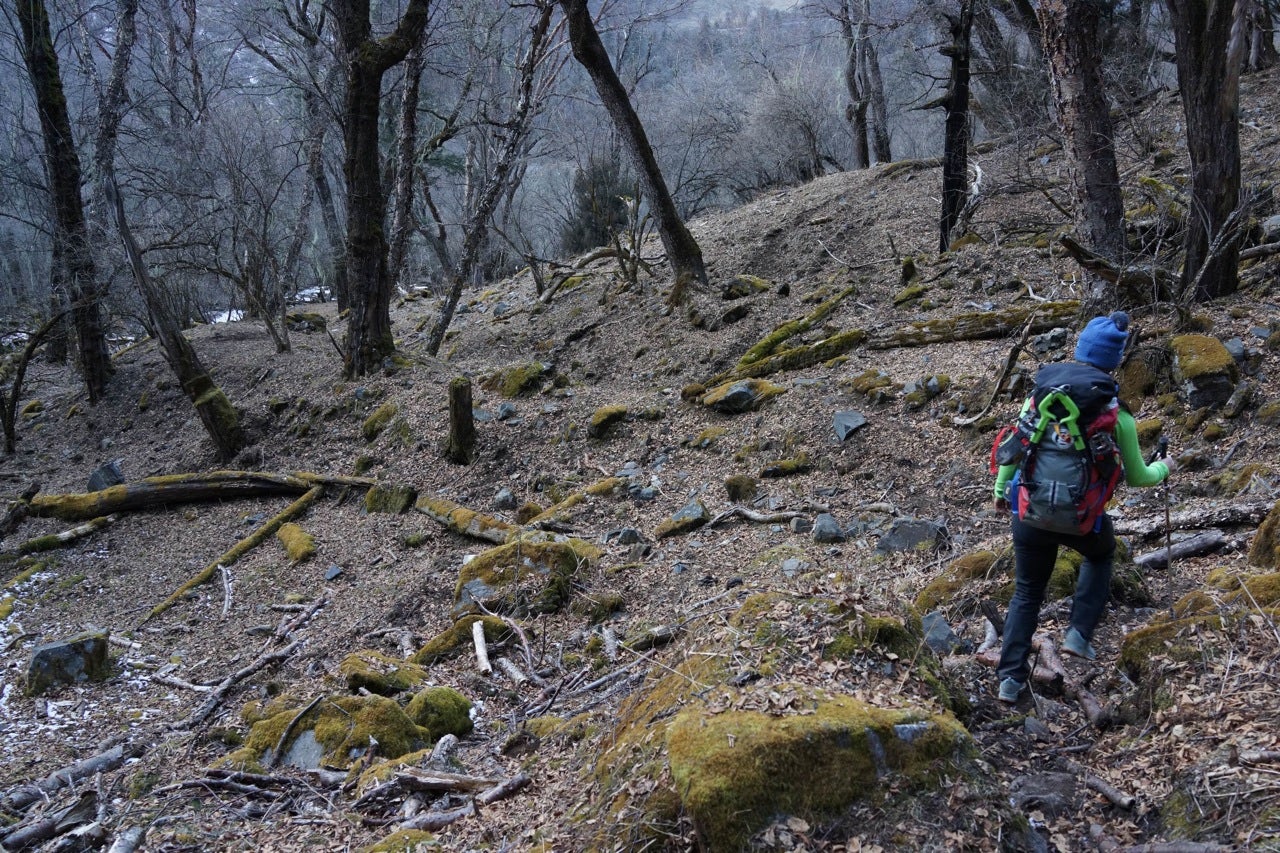 "As I watched the dancers, ​​I felt a sort of sadness or longing on my part for tradition and deep roots," Jewell says. "Though I'm very connected to my family, and to some extent I know where we come from, I'm not connected to my heritage in the way these people are. The longest standing traditions in my life are the ways I celebrate holidays with my family, and those are traditions that mean a lot to me. Watching the Shuangqiaogou people showed that heritage is very deeply rooted in their existence, and I find that very beautiful." 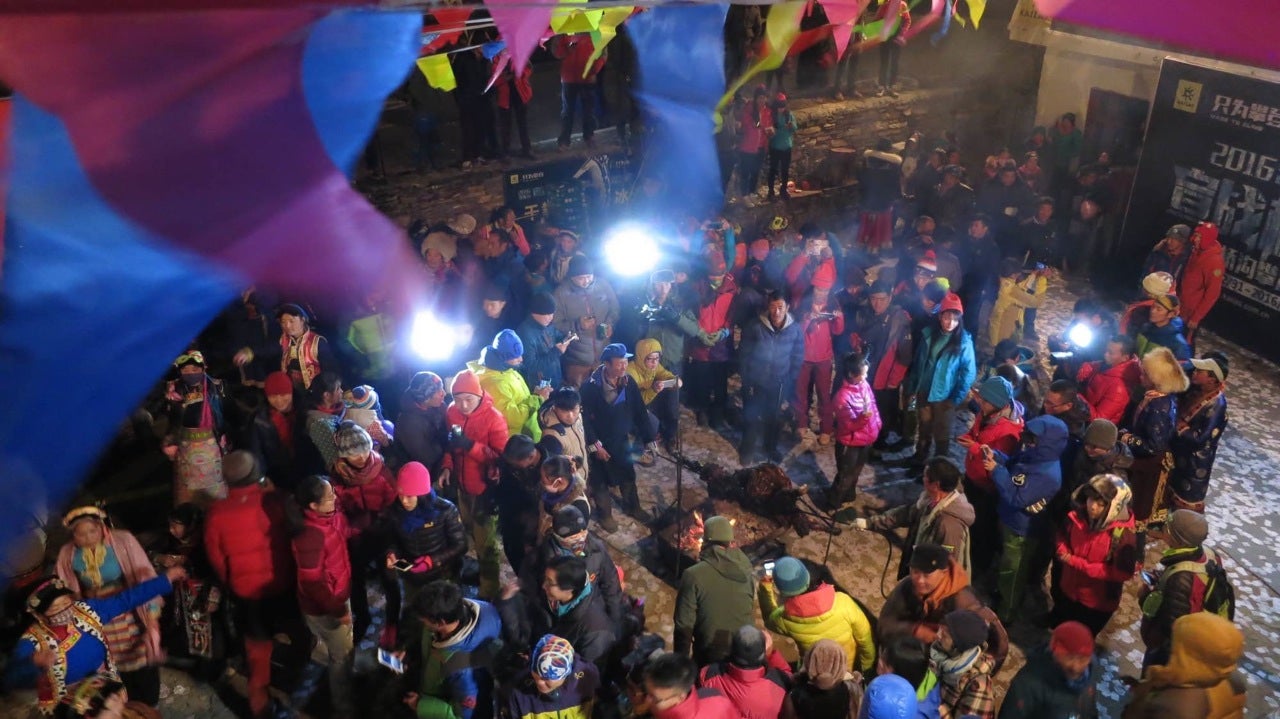 For as much as we can connect with people online, when we're sitting in front of computer screens, there's something to be said for real human interaction. "This trip was a huge reminder of how vast our world is, and what a gift it is to interact with other cultures and view and appreciate how they live," Jewell says. "Sometimes it's easy to forget that when I'm wrapped up in my tiny but overstimulating world in front of the computer screen.​"

Climbing Clothes
Iceline Jacket and Iceline Pants
These two items are damn near the best thing that's happened to my climbing kit in recent years. They are streamlined, high-quality, and made to manage large temperature swings. I can get hot quickly when I'm on a tough lead, but then can get wicked cold as soon as I stop to belay. These layers are made for that huge swing.
Essence Tights
Deviator Hoody
UberLayer Hooded Jacket
I essentially live in the UberLayer—it's perfect for chilly approaches and even becomes my climbing layer when the ice isn't too wet. TRY IT! It's awesome.
Diode Hooded Jacket For warmth!
Stormtracker Gloves