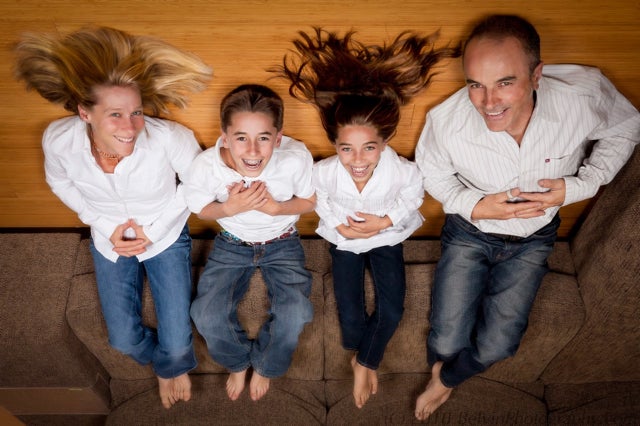 This interview first appeared on Beth Rodden's blog. For more info, check out her athlete page.

This is the first of several interviews of women who climbed during pregnancy. If I've learned anything from climbing and pregnancy, it's that there is a huge range of how people feel. Some women have been able to maintain a high activity level throughout their pregnancy and others feel so terrible that they are sidelined for months at a time. Even different pregnancies with the same women can vary drastically. I know that I am climbing far below my "normal" climbing level and frequency well into my second trimester. Robyn was able to maintain her climbing frequency throughout her pregnancy, but listen to your body and that will be the best medicine :)

When I started climbing, one person dominated the competition circuit: Robyn Erbesfield. She constantly won World Cup Championships and climbed 5.14. Posters of her climbing on hard european sport climbs flanked every climbing gym at the time.

As a young 15 year old I ventured to France in 1995 to compete in my first Junior World Cup. Along with Chris Sharma, Katie Brown, Tommy Caldwell, and many other future climbing crushers, we all headed over to try our hand on the international stage.

After the competition, we were invited by Robyn and her husband Didier (also a world cup champion) to train and climb with them at their home in the south of France. To a young climber like me, it was like Michael Jordan asking you to join him at his house to shoot hoops.

For anyone who knows Robyn, you know that she is extremely outgoing, generous, giving, and driven. We arrived late at their house after 8 hours of driving, and she promptly went into her gym and got her training done, literally starting at 10pm at night. I just remember thinking, "wow, that's what it takes to be the best!"

Over the years I've had the privilege of of climbing with her on and off, trying to hone my training skills and keep up with her in between laughter. I climbed with her during both of her pregnancies with her children, Shawn and Brooke (both now 5.14 climbers). It's no surprise that being pregnant didn't slow her down, especially given her terrible nausea during the first trimester. Whenever I thought about having kids and perhaps my body not bouncing back, I thought of Robyn. Then again, that's comparing myself to a superhuman :)

She was kind enough to answer some questions on her pregnancy and life, I hope you enjoy!

You are one of the most accomplished female climbers in history, can you tell me about your thought process to have children?

The process was pretty simple. I felt very satisfied with my climbing at that time after having won 4 World Cup Titles, and Didier and I were really ready to start a family. While I always knew I'd continue to climb and climb well, I was ready for a change.

Can you tell me about how you felt it would effect your career?

Like most women, I was afraid that being pregnant might affect my body and put a hold on my ability to progress. I must say that I was way more nervous with my first child (Shawn) and way more relaxed with the second. I knew after having Shawn that everything comes back!

Did you "time" it at all? (ie with your career, seasons for climbing or comps)

I guess you could say we timed it only because both kids were born in April which means they were conceived during the summer...the most relaxing time of the year.

If you think back to either or both of your pregnancies, were there especially rough times? Were you able to remain active in climbing and other sports?

I was oh so sick with both kids for the first 12 weeks. However, I had easy pregnancies after that and climbed till the day I delivered.

How did your climbing progress throughout pregnancy? Were you worried about injuries?

I wasn't worried about injuries but I was very responsible. I wore a body harness right away and only top roped climbs.

How long were you able to climb for? Did you climb in the gym and outside?

I climbed all the time both indoors and out.

Think about how or if it changed your career, can you tell me about that?

Well having kids definitely changed things for me for the better. My entire career (after competitions) is based on teaching kids climbing and all of that was created because I wanted my kids to share the passion of climbing with other kids, and that's why ABC Kids Climbing was created.

Was there anything you avoided during pregnancy?

Not really, I was told to avoid sushi but I didn't. He He.

How do you see professional pregnant climber women having a role in the industry?

I see that as very natural. Unless you can't have kids :( then everyone will be doing it at some time.