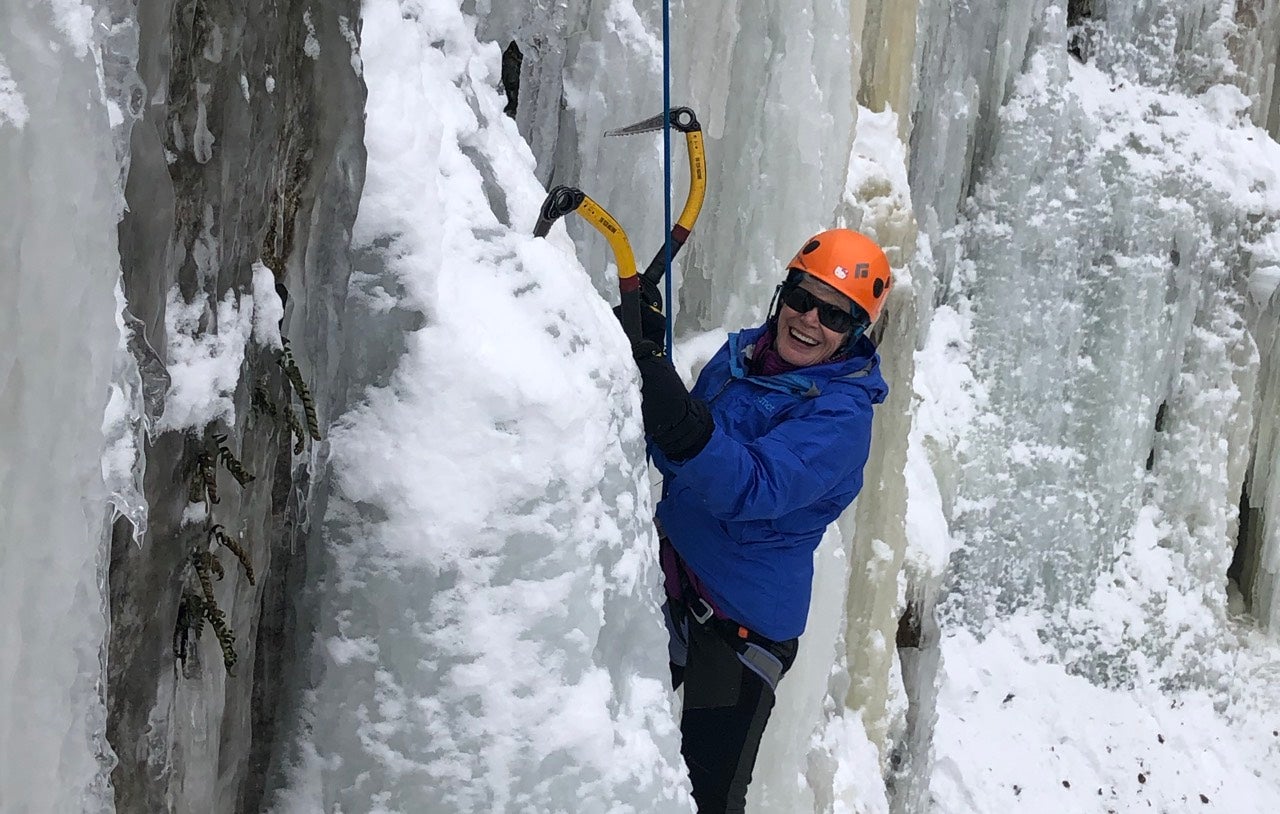 Right away, I pointed to the ice I wanted to climb—a stand-alone pillars on a tall wall facing our parking spot. But our guide explained we’d start on something easier. It turned out, just getting to that easier route would reveal the first challenge of real ice climbing: walking on uneven ground in heavy boots with crampons attached.

I was joining a party of men—it would be two guides and three friends from my home gym, Climb Iowa in Des Moines—for ice climbing at Robinson Park in Sandstone, Minn., on a trip sponsored by Pingora Outdoors. Being slightly less than five feet tall, weighing only 93 pounds and clocking in at 75 years old, I still thought I could keep up.

I had climbed ice once before—three years ago—in Iowa at a place called The Silo, some 80 feet of ice farmed on the outside of a farmer’s old grain solo by running water down its sides at night. Ninety miles from my home in Ankeny, Iowa, it’s certainly the nearest ice climbing opportunity. And I loved it—ice climbing seemed easier to me than rock climbing in the gym, because gripping the ice tools like a hammer didn’t tax my arms or hands the same way. There are no crimps in ice climbing. But at Sandstone, I found out there’s more to it than that.

Lifting my heavy mountaineering boots high enough so the crampons didn’t catch on something was a major chore. (I didn’t realize how lightweight athletic shoes spoil me on a daily basis!) Walking uphill, I tended to topple backward, especially when carrying a pack. Fortunately, someone always took my pack from me and walked behind me to push me back upright if I started to waver. 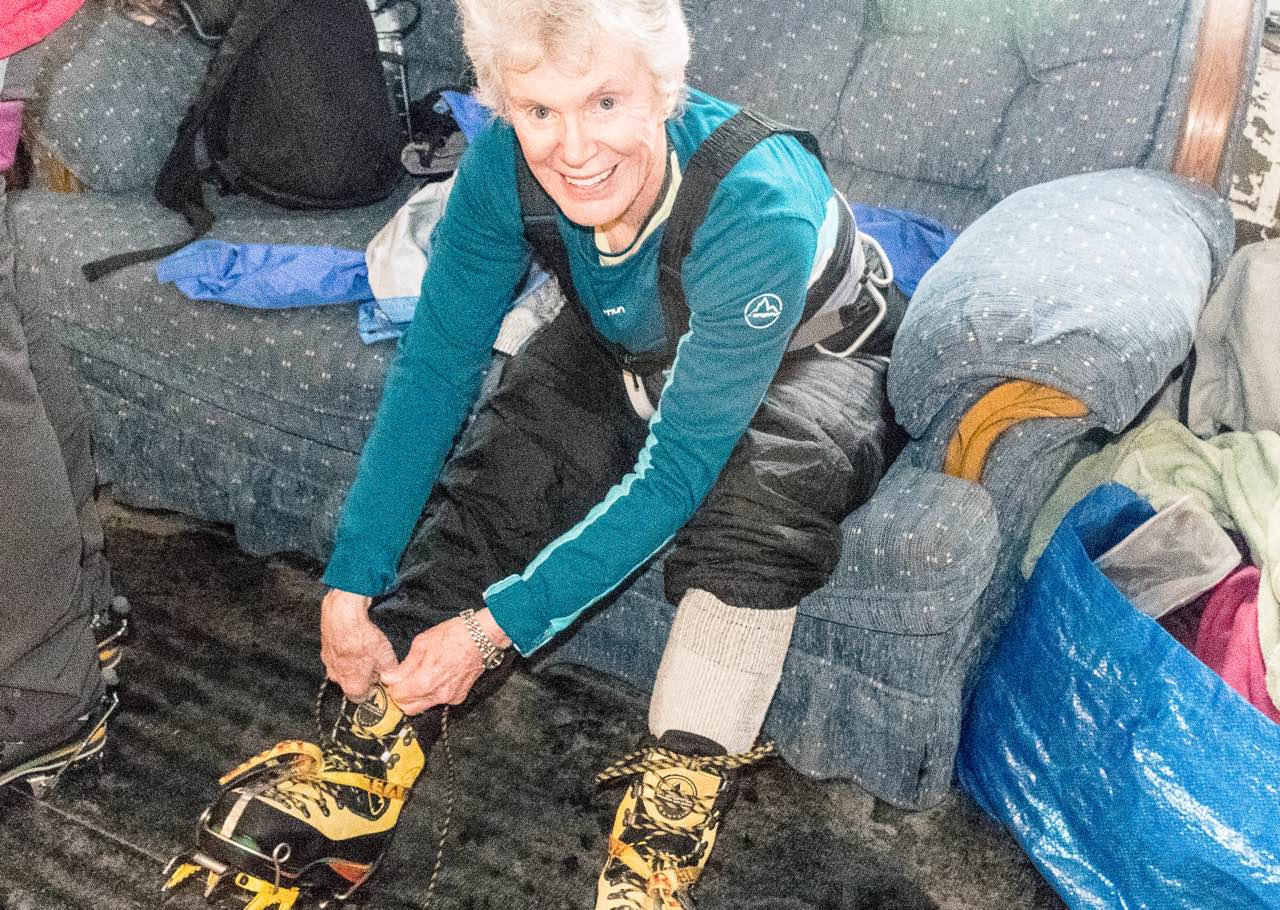 The ice at Sandstone is farmed from the top of the walls of a large abandoned quarry, and the ladders to the higher pitches of ice posed the next challenge. Huge upright ladders with tall steps required all my strength to raise my feet high enough to get on the next step. I would forget about my crampons and not lift my feet high enough, so I was frequently unbalanced. One time I fell into one of our team as he belayed, almost taking him down.

I had encountered none of these problems at the Silo; there, I was perfectly capable of moving around on the smooth, packed surface that went all of 30 feet from the warming hut to the climbing. Thankfully, at least this time weather was perfect, a high of 34⁰ with no wind.

When we began climbing the ice on toprope, John patiently demonstrated the proper technique. First, place an axe in with one hand. Next, kick a foot placement with one foot and bring the second foot up to the same level. Then you go up with the other hand and repeat the process: pick-kick-kick, pick-kick-kick.

Did I mention I’m less than five feet tall and 93 pounds? How powerful do you think I am? “Not very” turns out to be the answer. At the Silo, there had been a lot of traffic on the ice, and I made most of my moves by “hooking,” placing my axe into previously chopped holes or natural bubbles and pockets in the ice. The same for the feet: Instead of kicking my own placements, I merely found the ones already there.

SHOP THE BASE LAYER COLLECTION

I hadn’t realized how advantageous this had been until I tried climbing at Sandstone. Some routes allowed me to place feet and axes without much trouble. Other routes had thick, clear, unscarred ice where it was terribly difficult for me to make progress if I stuck to proper ice climbing technique. I bashed it with my axe, and it just shattered in my face as my axe bounced off. The crampons did the same, and even when I thought I had good footing, one or both would slip.

Our guides were so helpful, exhorting me to put more power into my movements. (Did I mention I’m 75?) But eventually I realized part of my problem was that my demo boots were just too big, and my feet were almost coming out of them. At lunch, I traded for a pair of boots that fit me better. I still had trouble bashing foot placements, but at least the boots weren’t coming off my feet. Occasionally I gave up on proper technique, getting to the top however I could—confirming I really do prefer to be a “hooker”.

After a lunch break of hot pizza, we continued climbing routes—but not the pillar I’d seen when we arrived. I learned about setting toprope anchors, placing ice screws, and making V-threads. And I discovered that placing an ice screw in clear ice is not impossible for me at all—as long as I am on the ground. But it’s nothing I could do midway up a wall, since I need both hands to start the screw. 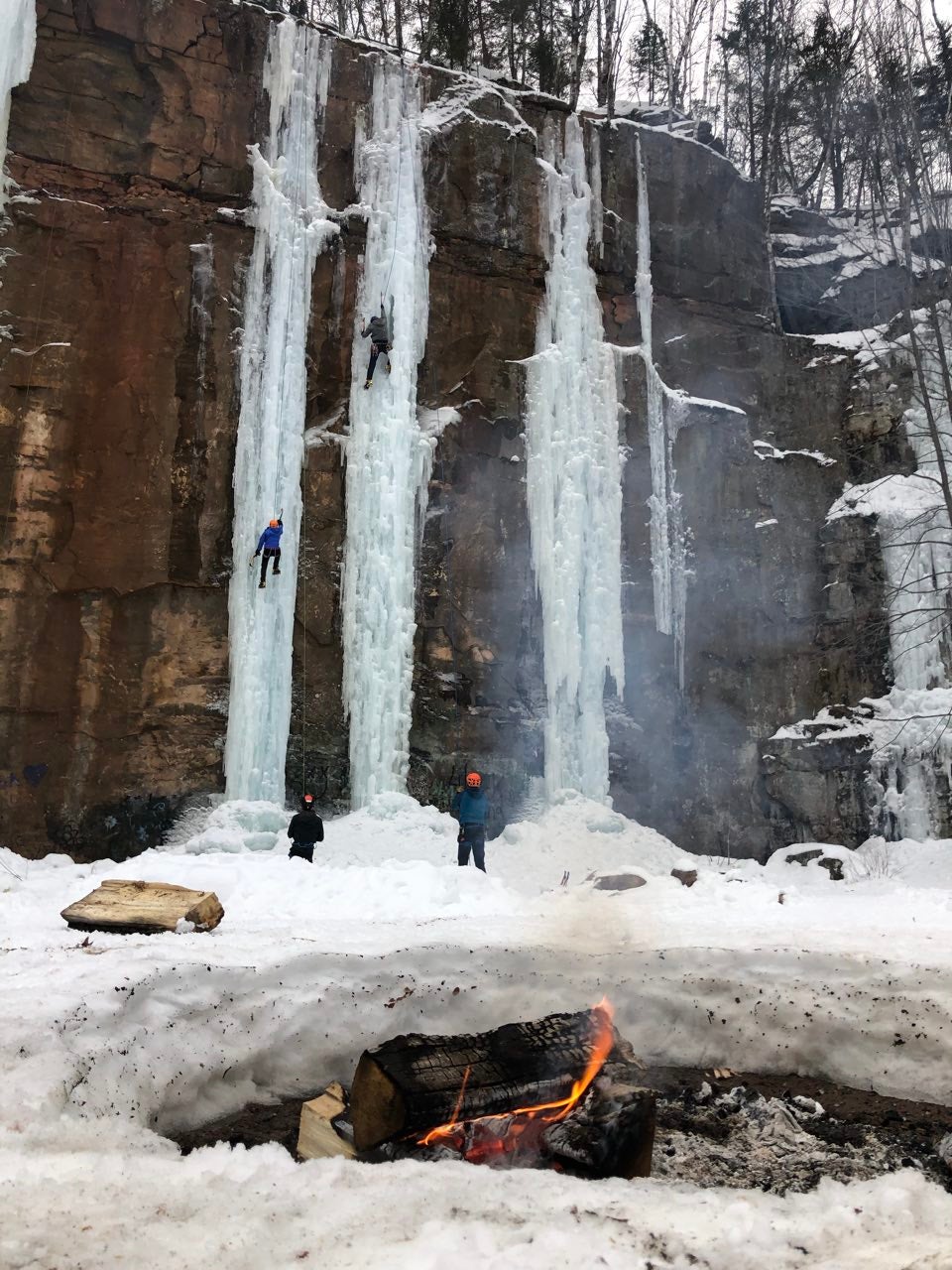 I intended to take a lot of photos to share but found out my phone died in the cold. I was told to keep it closer to my body, but that would mean being in the inner pocket of my vest. The chances of me being able to fish it out through three layers without dropping it were slim to none, and it was a moot point since the phone still had no charge when warmed. Has anyone tried using a hand warmer next to the phone to keep it warm?

I kept reminding everyone about the pillar wall, and toward the end of the day, we went for it. No one had been on it all day, so we didn’t have to wait. Ropes were hung on the two pillars, and I climbed the right one first. My first assessment had been correct, and I was able to get to the top easily. It was a beautiful line and made me forget all the problems I’d had on other routes. We each did both pillars, pulled the ropes and started packing up.

What a relief to finally remove the heavy boots and crampons after the final route. Walking around in my regular snow boots was so easy my legs felt like they’d been filled with Helium. I was elated that I didn’t feel tired at all, and proud that I had survived seemingly unscathed. But on the way to the hotel hot tub, my legs felt like lead. Maybe I wasn’t such a badass after all! My knees were covered in fresh bruises and my shin bore a swollen bruise that was almost bleeding. This happens to me frequently, for merely bumping a hold in the climbing gym will cause a bruise. I just hoped the other people at the hotel pool wouldn’t blame the guys for abusing me.

After a long soak with the team, I returned to my room where I caught sight of myself in the mirror. What was wrong with my arms? The skin hung like old leather on them. I suddenly realized that I had not drunk enough water and was quite dehydrated. I started guzzling water, and by morning I looked human again.

Sadly, my right hand did not feel human, though, it felt like a claw. I remembered holding my weight with the right hand for some time on one route as I kept trying to find a placement for my left. Seems like the knuckles of my middle finger hadn’t appreciated my efforts, and the finger didn’t want to open or close. But what a day it had been! I had climbed every route the younger guys did, the moderate weather assured I was never cold, the companionship was stellar, and the venue was great. It only took a few days for the hand to get back to normal, and I was climbing again.

Next up, Ouray—but maybe just after the ice festival when the walls will be all chopped up and the hooking will be stellar!