Corey Garmon And The Four-Fingered Glove 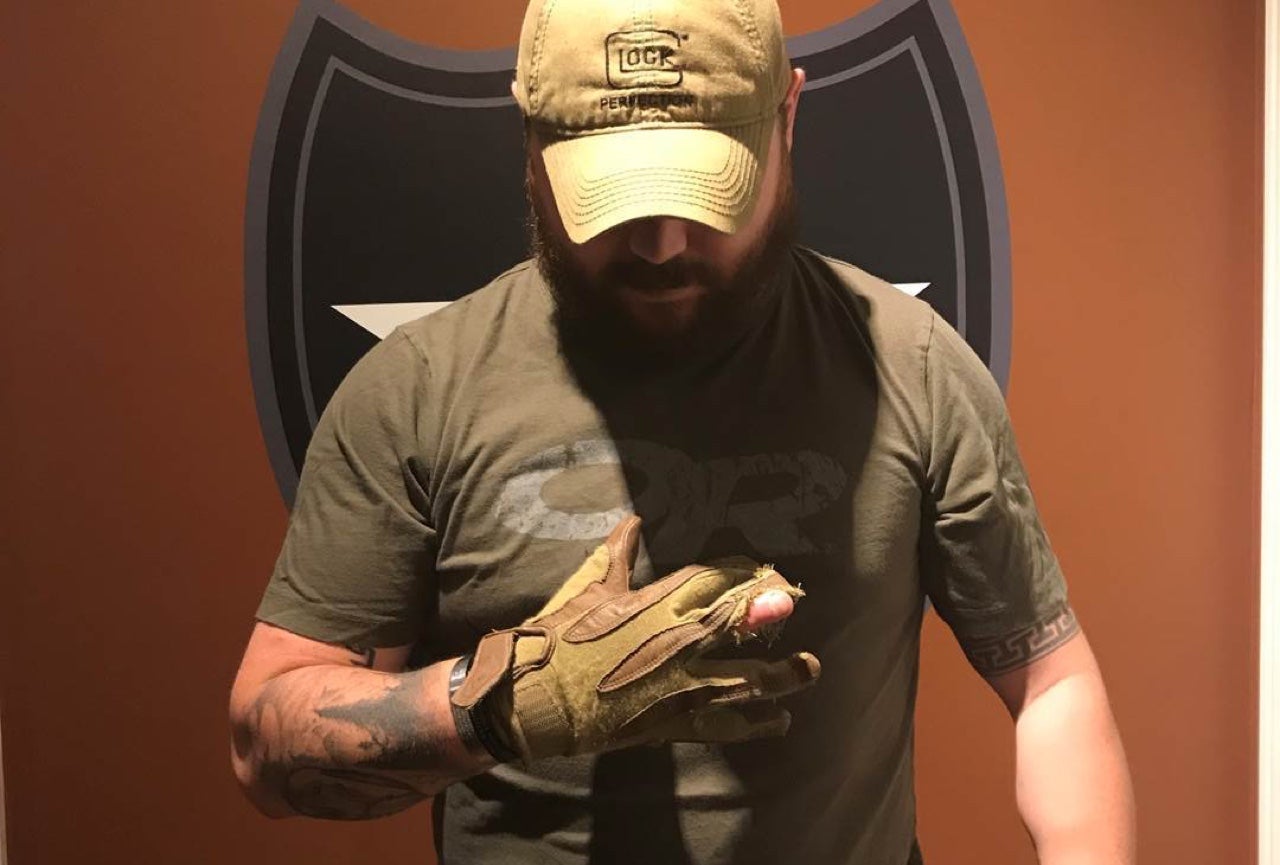 In Corey Garmon’s shadowbox lies a collection of patches, medals—including a Purple Heart—and a single Outdoor Research glove with the right middle finger mangled. It was one of the gloves he was wearing when he was hit in Afghanistan. The day that changed everything.

Garmon didn’t grow up dreaming of serving in the military—in high school, sports were everything to him. His dad being a football coach, he’d grown up around the field house and locker rooms in northeast Alabama, and played quarterback in high school. “I was there to play football and baseball,” he says. “And my grades showed that. I got just enough to keep playing.” After graduation, he found himself working construction, living paycheck to paycheck. He made what he calls a business decision and enlisted in the army, ready for a change. “If I’d stayed around the kind of town we lived in, it’s not hard at all to get yourself in trouble,” he says. 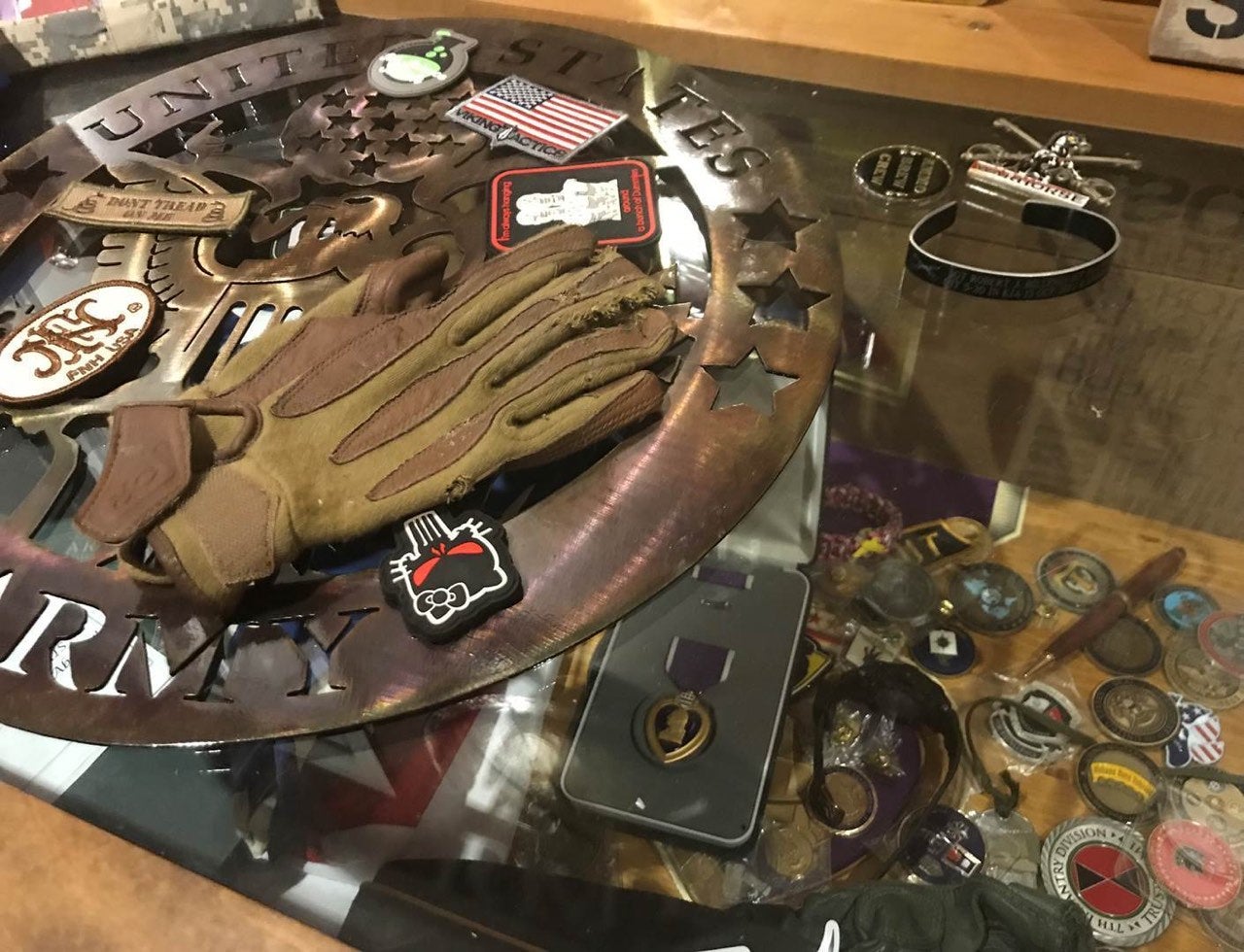 In basic training, Garmon excelled, performing for drill sergeants the way he had for his dad and for his football coaches growing up. He wanted to be a scout. And while his parents were visiting for his graduation from advanced individual training in 2011, an officer told him—in front of his parents—that he’d be deploying to Afghanistan before the year’s end. He had not told his mother yet.

Between basic training and deploying, Garmon says he began to feel a sense of drive and purpose, where previously he’d felt lost. And once in Afghanistan, he built brotherhood, as well. When he first deployed, he was warned that they’d certainly be shot at, but the No. 1 threat was IEDs—improvised explosive devices. “They’re really little mason jars, maybe two- to five-cup mason jars—not really big IEDs—called toe-poppers,” he says.” In the flat terrain, the Taliban couldn’t compete with them, Garmon says, but if they could take one or two American soldiers out with IEDs, it caused a distraction and drew others to help them, evening the field a bit.

Garmon’s first four months of deployment felt boring, he says. But after a trip home and a change of seasons, things changed. “We had our third platoon guys doing a presence patrol,” Garmon says. “They’re just walking through villages, finding the elder and saying, ‘Do you have water? Fuel? What can we get you?’ And during that patrol one of the guys had stepped on an IED, and two were injured.”

His was the closest unit nearby, so they were told to pack water and go help. They arrived to a firefight, and were sent in, since the platoon there was down the two injured. “We didn’t know the area or what to look for, or where the bad spots were,” Garmon says. “Not ideal.” Plus, they’d given all their water to the injured soldiers, and it was 115 degrees in the shade, he says. 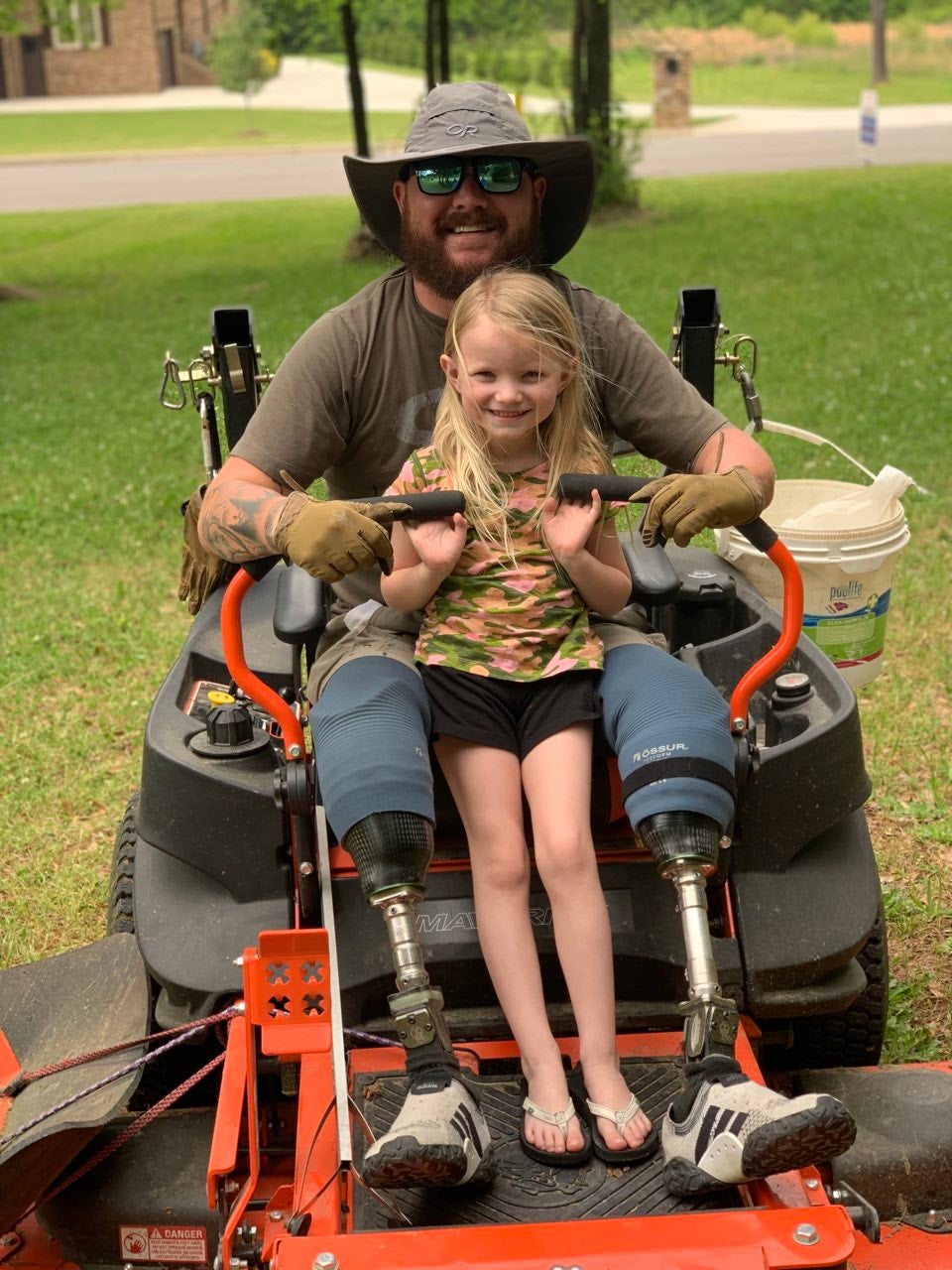 But they pressed forward, stepping heel-to-toe in each other’s footsteps, following a metal detector, through a field of IEDs. After an hour, Garmon says he’d stepped over at least 40 small devices he thought might have been IEDs. Finally arriving at the scene of the explosion, Garmon heard over the radio that the Taliban fighters had them in their sights. He looked for a place to take cover—but as he moved that way, another explosion blasted.

“I don’t know how long I was out–maybe five to seven seconds—maybe I wasn't even out,” he says. “But I immediately started yelling, ‘Help me, I’m hit.’” It was an IED. But the dust swirled around him from bullets, now, too.

Everything below the knot of his left boot was gone, he says, and his right leg looked like a bad break. Blood came from his hands, but he tried to apply tourniquets. But Garmon’s buddy Thomas and a medi Doc Wojo came through, applying tourniquets and talking football to him to keep him calm. After a few minutes of waiting for a helicopter to pick them up, Garmon became aware of the pain. “My left arm felt like I was on fire,” he says. “The bomb was so hot, it cauterized everything, which probably saved my life.”

But to get back to a base for medical care wasn’t going to be easy. Under fire, no helicopter could land to pick him up, so they were forced to start walking. “All I can think about is all the IEDs we stepped over to get here,” Garmon says. “And now we’re two men wide [as he’s being helped along], the chances of not stepping on an IED on the way out of that ... .” 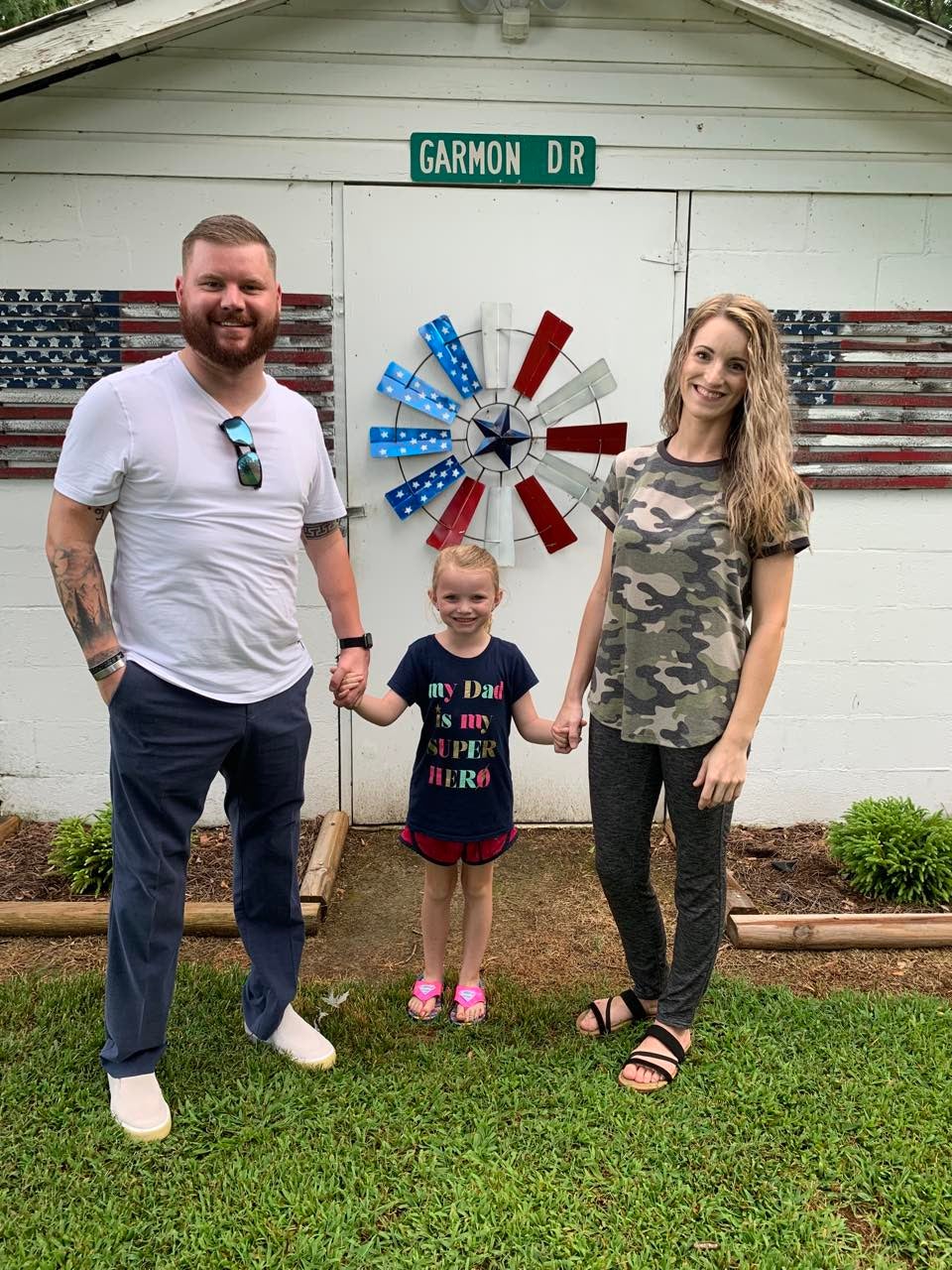 The clock was ticking. “In Afghanistan, we had what we called the golden hour,” he explains. “If you’re on the helicopter and back to a base with medical care within an hour, you’ve got a 98 percent chance of survival, but every minute after that sees a drastic change in that percentage.”

At 55 minutes after the explosion, a helicopter—still under fire—was able to pick Garmon up. As soon as he was unloaded, he blacked out.

After 15 days in the emergency room, it was decision time. Garmon’s left leg had been amputated immediately. But was he ready to be a double amputee? “The doctor told me, if you decide to keep it, you’re going to be three inches shorter because there are gaps where there’s nothing there—it’s very messed up,” he says.

After two years at Walter Reed Army Medical Center in Washington, D.C.—a longer time than his entire military career, he points out—he was able to go home. But adjusting wasn’t so straightforward. He struggled to get off his medications, and faced depression, having gone from being surrounded by hundreds of other people dealing with the same injuries to feeling isolated far away, where it was difficult for people to understand what he’d been through. “I blame all that on me not taking my traumatic brain injury and post-traumatic stress disorder as seriously as I should have,” he says. “I thought, ‘I can handle this—I’ll get over it.’”

With support from his wife and community in Guntersville, Ala.,—and time spent outdoors with other veterans—he’s changed his perspective. “Do I want to be that cliche angry vet? What do I do?” he says.

Medically retired from the army in 2014, Garmon now focuses on a job with the department of defense and spending time with his young daughter, who will be starting school next year. He takes his wife Megan and daughter golfing at a nearby park and to the beach, using a wheelchair with treads.

Earlier this year, Garmon reached out to Outdoor Research customer service, explaining he’d lost most of his left hand and had difficulty with gloves. Nathan Jenkin, design and innovation manager, asked for a trace of Garmon’s hand, and Autumn Salisbury-VanderKloot sewed custom gloves for Garmon.

We’d like to thank Corey Garmon for his service to this country, his sacrifice, and his positive attitude in the face of great adversity.