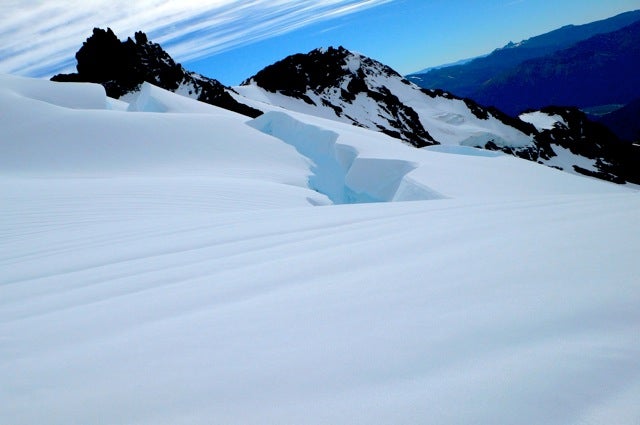 Hurry up and wait. I think we might have set a record in our travels to Patagonia. From Denver International Airport it was a short 25 hours before we sat down and enjoyed our first Hamberguesa of the trip at El Rancho Grande. Three and a half weeks later, our speed record was our only achievement, period. I guess it's good to get a fast start! I only had 39 days - minus two for travel- so I had 37 days in El Chaltén. Plenty of time, I thought, to get up a few big routes. In the end I spent about 24 hours alpine climbing. So, I spent 888 hours doing nothing so I could spend 24 hours doing what I love most.

p>Honestly, it doesn't make sense, I spent thousands of dollars to basically get weak and drink Argentine wine. I'm sure I could have pulled that off at home… probably not - I would have climbed a lot more. Plus, I could have spent the evenings at home with my wife and daughter, instead of endlessly spraying about the weather with a bunch of smelly gringos. As I harshly learned, this is alpine climbing reality. You sit, and sit, and sit. Then you run, run, run. Only to get fooled and have to descend and wait again. Finally, if you are lucky, everything aligns and the sun emerges, dries the cracks, clears the faces and you pray you've put everything in place and you SEND

Being raised in New Hampshire, I have good Puritan values. Basically, that means I learned early to never let anybody know what you're thinking. I was depressed, thinking I had spent all of this money, and coordinated this chunk of time away from my wife and four year old daughter for nothing. Just an expensive camping trip, oh, and I injured myself bouldering. Great, just GREAT!

Just as I thought it couldn't get any worse, I was right. With just seven days left in our trip the weather felt like giving us a chance. We were ready and so was everyone else in the region, climbers poured into the streets like Bud Light at a frat party… Everyone was running for the hills. Unfortunately, the big rock routes were out of the question still, as the cracks and ledges were choked with snow and ice. Because of this we headed to the west side of Fitz Roy for a route that usually melts out in mid December, just as it did this year. But, with all the snow that had been piling up over the last two months we knew the Supercanaleta would be in good nick. And we were right.

I am not exaggerating when I say our climb "started" with 3,000' of ice climbing. If all goes according to plan you do the "start" in the dark. Otherwise it'd be too scary to solo, not because of the difficulty, but the sheer size. Who ever said "size doesn't matter" never climbed a big mountain. Being a couple thousand feet from terra firma is scary, no matter who you are. So, it makes sense to do this in the dark, just you and your bubble of light, making way up a nice grade 3 ice tongue. As expected, we reached the rope-up point right at first light. And over the next few hours we simul-climbed endless alpine perfection. Splitter granite cracks and aesthetic ice smears led up to the ridge that would lead us on a circuitous path to my first, and the tallest, Patagonian summit. But, ridges tend to be less than straight forward climbing and we found ourselves climbing up, down and across beautiful rime covered rock. Finally arriving at the apex of the technical climbing, we did a short rappel and slogged up the final slopes to the summit of Fitz Roy.

That's it, 888 hours is all it takes to get your 24 hour route in… was it worth it? In the end, yes. Definitely. I spent the day and night with a good friend, and I mean "spent the night". Zack and I curled up in his two man bivy sac (read: piece of nylon) and spooned the night away. We shivered, went numb, turned over and did it again… until daylight. But we woke up underneath Fitz Roy and had a great view of the Torres. In a hotel they'd charge you extra for that!

I remember being pretty negative and thinking that alpine trips were stupid, but those thoughts have happily been replaced with spooning and shivering, pre-dawn starts, star-lit glacier walks, and most of all, windless moments on top. For all of those hours spent being buffeted by the wind gave way to windless summits. Will I do it again? Definitely. Those hours spent on the mountain were irreplaceable, with beautiful ice runnels, perfect Patagonia rime-covered faces, and exquisite cracks. I'll remember the smiles on our faces as we stood on top and the exhausted look of satisfaction after a pitch-black descent off of less than AMGA approved anchors. And last but not least, the endless march back to town. Utterly silent, beautiful, haunting. Not passing another person for over five hours, in pitch black and arriving back at our cabana in town at 4:30am with a bus to catch in less than three hours! I couldn't have asked for a better trip.