Escaladora: When A Climb Is A Prayer 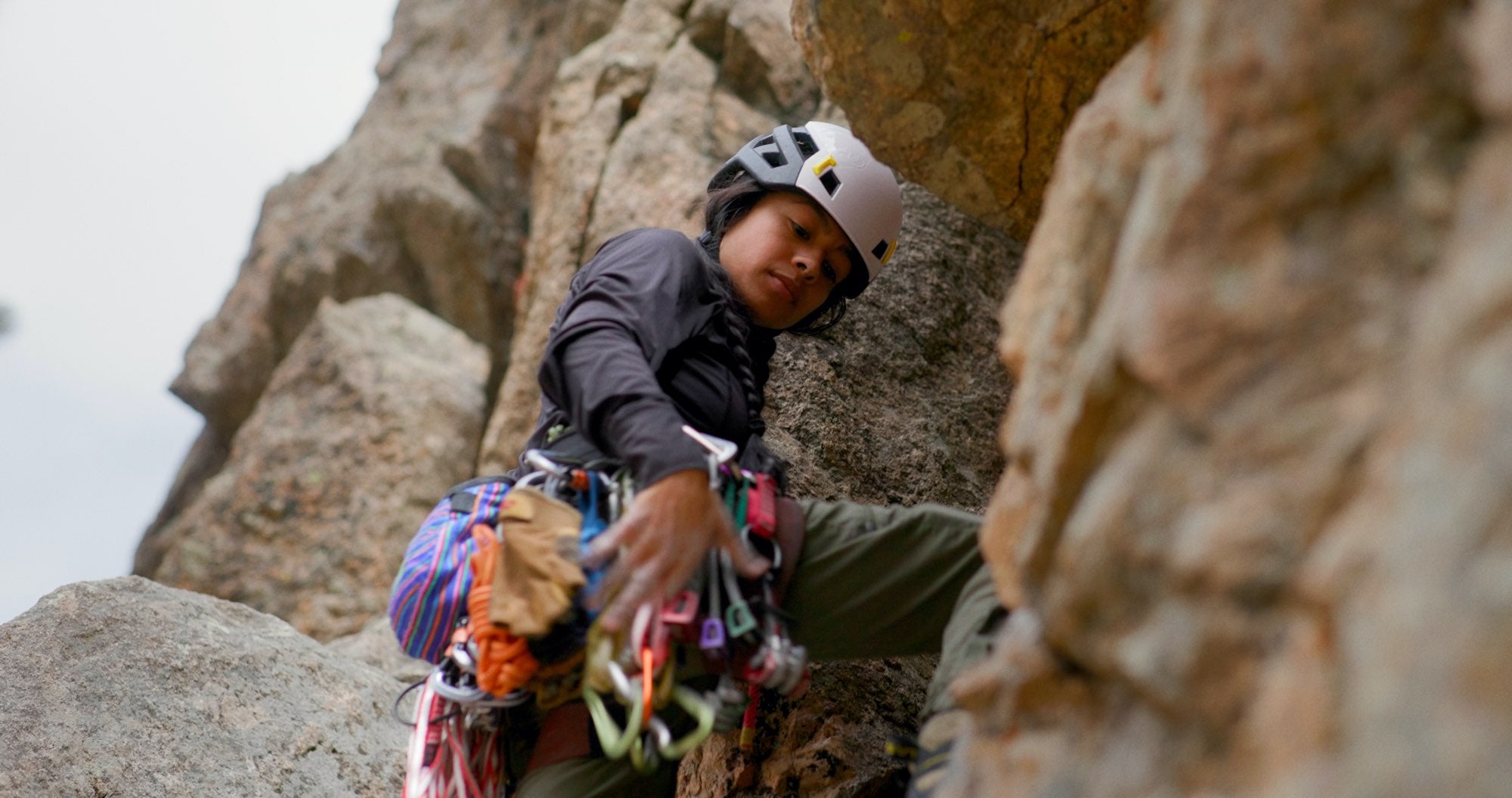 Sunglasses, hood and helmet sheltered Monserrat Alvarez Matehuala from the cold sun above 17,000 feet—but underneath all that, lots was happening. On top of Iztaccihuatl, Mexico’s third highest peak, emotions were strong.

Climbing Iztaccihuatl had always been a dream of Monserrat’s. Her father and uncle had climbed the dormant volcano back in the ‘80s, and the peak holds deep meaning for her as an Indigenous woman. It was the highest peak she’d ever climbed, and simply getting there had required a feat of logistics.

Truth No. 1:
When she sought guidance and blessing from her dad before the climb, he had disapproved of it, which pained her.

Truth No. 2:
She understood some of her family’s fear about her climbing “alone” with another woman—violence against women is surging in Mexico.

In those efforts to protect her, Monserrat saw patriarchal stereotypes reinforced.

Truth No. 4:
But she had done it. She and her best friend and mountaineering partner, Ariana. They were on top.

It was the kind of tangle of realities Monserrat was used to.

On a more typical day, Monserrat is leading a group of climbers in Boulder Canyon or working from home in South Boulder, Colo. And just like on top of Iztaccihuatl, she constantly contains a multitude of truths—one of them being the fact that for people of color, the outdoors can be both a place of healing and a place of trauma.

Building community is Monserrat’s true passion, and often that comes through climbing. She’s part of the founding team of Brown Girls Climb, a part-time instructor at Women’s Wilderness, and a volunteer with Latino Outdoors. She works to bring others to climbing because she has personally found healing through climbing. But it wasn’t always a smooth road.

“For a long time, I felt really disconnected from my body,” Monserrat says.

“As the daughter of undocumented immigrants, first generation, firstborn, being a woman, all of these things created a lot of pressure … I remember not feeling very confident in my skin and my body for a long time.”

Rock climbing allowed Monserrat to feel present in her own body in a new way. “Really feeling autonomy over my body—that's what climbing gave to me,” she says.

That’s what she wants to pass on to others: autonomy and freedom in the outdoors. But that isn’t always as straightforward as it may sound.

“People of color have traumatic experiences in relationship to the outdoors,” she says, pointing to not-so-long-ago segregation of parks and the displacement of Indigenous people for the creation of national parks. Just down the road from Monserrat’s home and visible from a popular climbing spot, Golden’s South Table Mountain was infamously the site of large Ku Klux Klan rallies—including the burning of crosses more than 50 feet tall, visible up and down the valley below.

Wounds don’t only come from the past, though. Monserrat recalls taking a group of youth climbing up Clear Creek Canyon outside Golden, Colo., to find a swastika spray painted on the crag.

“I'm aware of the memory and trauma the land holds around me,” Monserrat says. “Those are things I can't turn off. As an instructor who's aware of these things, I can't just take someone to a crag and not understand the history of that place.”

That dual reality—of trauma and healing—drives Monserrat as an instructor and community leader.

The intentional movement and mind-body connection are more than the sum of their parts. She compares it to danza Mexica—a traditional ceremonial dancing she takes part in. You can see more of this in the film Escaladora.

“Danza translates literally to ‘dancing’ in English, but we're not just dancing,” she explains. “We're praying. It is a ceremony for us.”

Each step of each dance is a prayer with her feet, she says, created with intention and focus on the present. Just as standing on top of Iztaccihuatl was not simply summiting a mountain, and guiding people of color in the outdoors is not simply about recreation—everything comes back to purpose and intention for Monserrat. “A prayer in movement.”