First-Timer's Guide To The Verdon Gorge 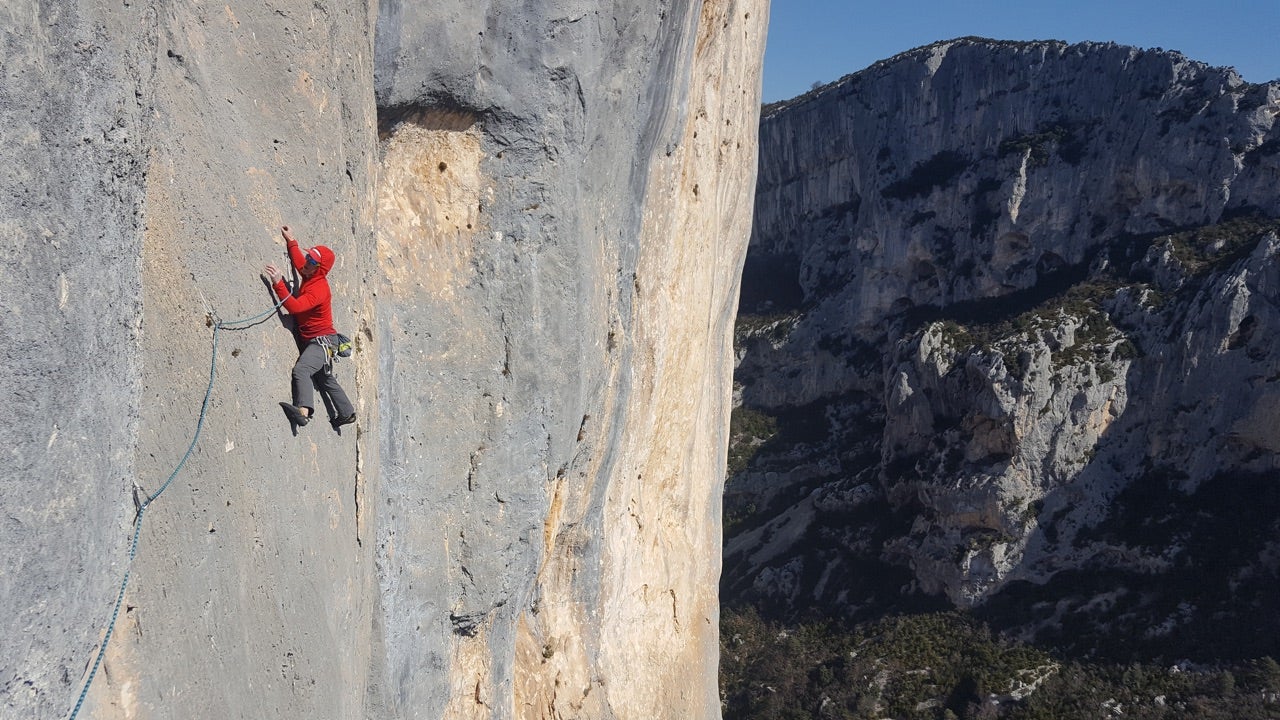 The Verdon Gorge is one of the most spectacular climbing destinations in France. The grey limestone walls rise above a turquoise river—an airy and dramatic climbing venue. And while the gorge is best known for its long multi-pitch bolted routes, there are trad climbs, sport climbing sectors, and even aid routes. With more than 500 routes, some up to 1,000 feet long, there is sure to be something for everyone.  With short approaches, thought-provoking climbs and beautiful scenery all in close proximity to a quaint French village, what’s not to like?

While the reputation of the Verdon should not be taken lightly, the Gorge is more accessible than most people think. Many new routes are well bolted and, for people climbing below 5.9, there are enough routes for a nice weeks’ worth of climbing. With that said, being comfortable climbing 5.10 will open up a lot more options. Also, pulling on bolts to get through a hard section is common practice in the Gorge and one hard pitch shouldn’t stop you from enjoying a climb.  And, if you really want to take the stress out, you can always hire a guide. Here’s some info to get you started. 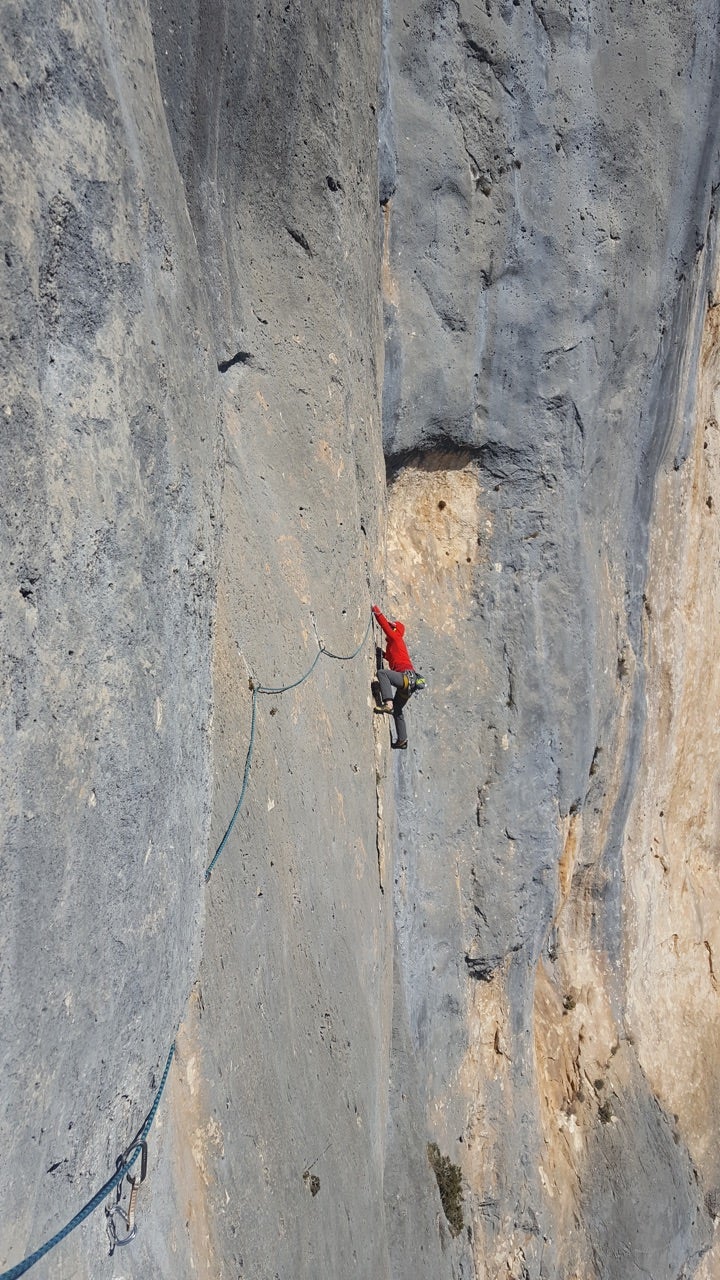 Climbing in the Verdon dates back to the mid 1960s. By the mid ’70s, the use of bolts and establishing routes from the top down transformed the Gorge. By the mid-‘80s, France’s legendary climbers were making names for themselves there. However, due to the style of climbing (technical face climbing) and the boldness of some of the first ascensionists, the Verdon was regarded as a somewhat elite venue.   Today, while this reputation still exists, there has been a number of moderate routes established and the Gorge has become increasingly accessible.

The latest guidebook has done a great job at opening up the Gorge to more people. The book is easy to use and does a good job of describing climbs and informing would-be suitors of the level of “engagement” required for a particular climb. For example, a climb might be rated 6c with only obligatory 6a climbing, which would be easier than a route graded 6b with obligatory 6b climibing! The guide also lists supplemental gear (e.g. Cams, nuts or a hook...) if helpful or necessary. Nevertheless, it’s a good idea to start off slowly in the Gorge and get acquainted to the rock, style of climbing and ratings.  Most routes are accessed via rappel so retreat, where possible, would be a laborious affair. 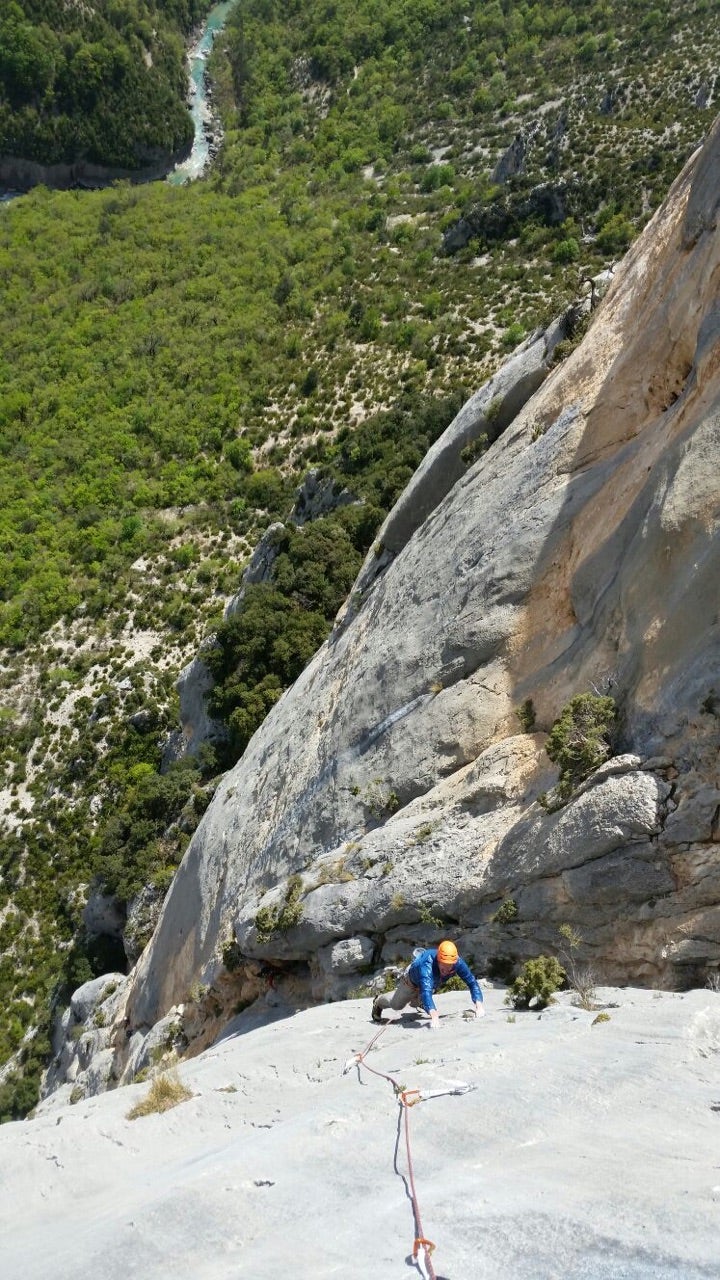 There is no easy way to get to the Verdon Gorge, which, in many ways, adds to its charm. The roads in the region are incredibly windy and, while not very far from a couple of major cities, it takes a long time to get to there. The Gorge is located outside a small village called La Palud, which is where you would stay. The closest cities with larger airports, are Nice and Marseille. Flying to either airport and renting a car would be the simplest option, taking about 2.5 hours. From the Alps, count on a six-hour drive.

The sleepy town of La Palud offers everything a climber needs: restaurants, lodging, grocery store, bakery, bar, gas station, ATM, a guide service and a climbing shop. Accommodation ranges from a public campground to dormitory style hostels to a four-star hotel. But the number of rooms in the town is far from limitless and the Gorge is very popular with hikers and tourists, so it’s a good idea to book rooms early if your dates are fixed. I try to stay at the “Gite Escales,” run by a friendly couple—both climbers—who will give great advice on routes. 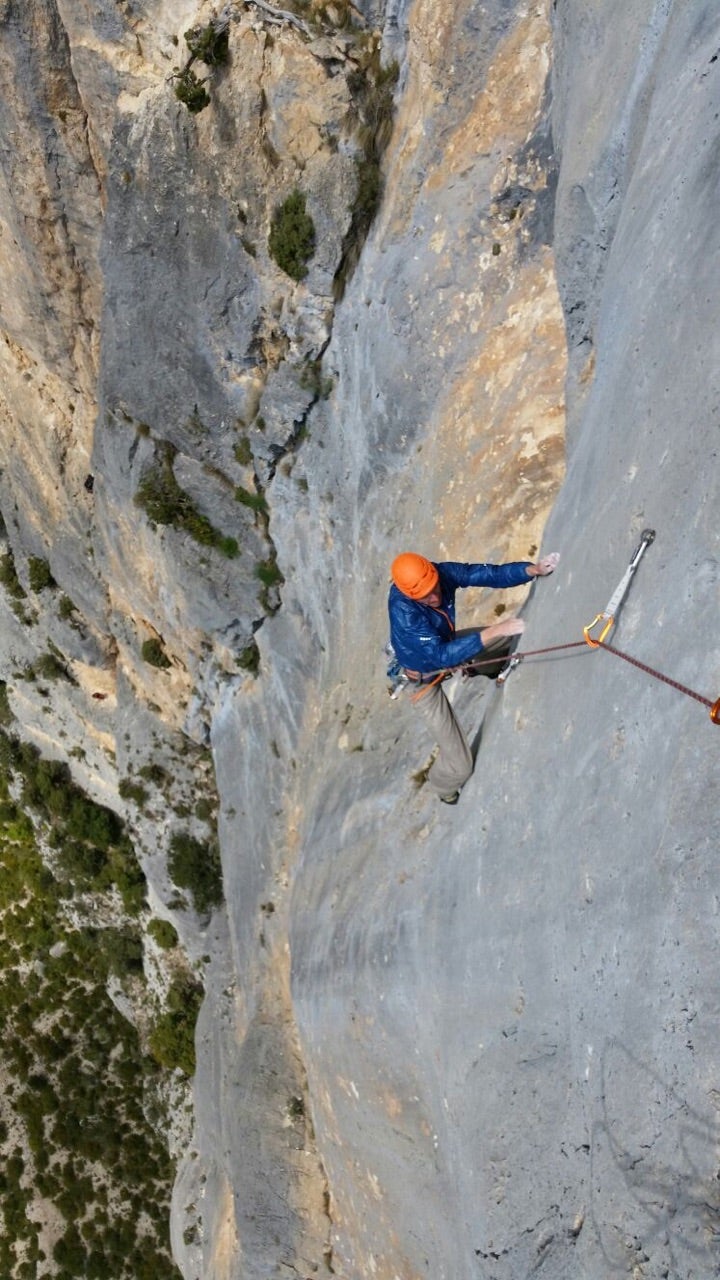 Like many climbing areas, the best season for the Verdon is Spring and Fall. Winters are normally too cold and summers too hot. However, given the orientation of the Gorge, many routes come into the shade by midafternoon. Therefore, it’s possible to get a late start and climb in the shade during the summer months. Typically, there’s an afternoon breeze, which helps with climbing temperatures. If you want to climb in the sun, April and May or September and October would be the prime season.

After a few days of climbing in the Verdon, if your fingers don’t need a rest, your nerves will! On a nice day, visiting the nearby Lac Saint-Croix is a great way to pass the day. You can go for a swim or rent canoes, kayaks or even peddle boats if your arms really need a break. There are miles of great trails in the area if you’re looking for a more active rest day, and the Sentier Martel is one not to be missed.

With more than 500 routes, how do you pick just a few? Here are three of the all-time Verdon classics.

La Demand: Super classic! Over 1,000 feet of climbing, mostly around 5.9 with a couple harder sections clocking in at 5.10. This route has some bolts, but a few cams to supplement will keep you relaxed if not familiar with the rock.

Ula: The climb for North Americans! From the bottom, the route offers about 1,000 feet of climbing. The bolts have been removed from this route except for anchors, so you will need a double set of cams. The first couple of pitches are not great and most people start by traversing or rappelling over from the Jardin des Ecurilles.

Piechnibulle: An awesome line on an amazing wall. This route offers a variety of climbing styles from cracks to face on great rock. Most of the route is 5.10 with a pitch of 5.11 and one more pitch of 5.13a. The hardest section is bolted to aid through, which is what most people do. 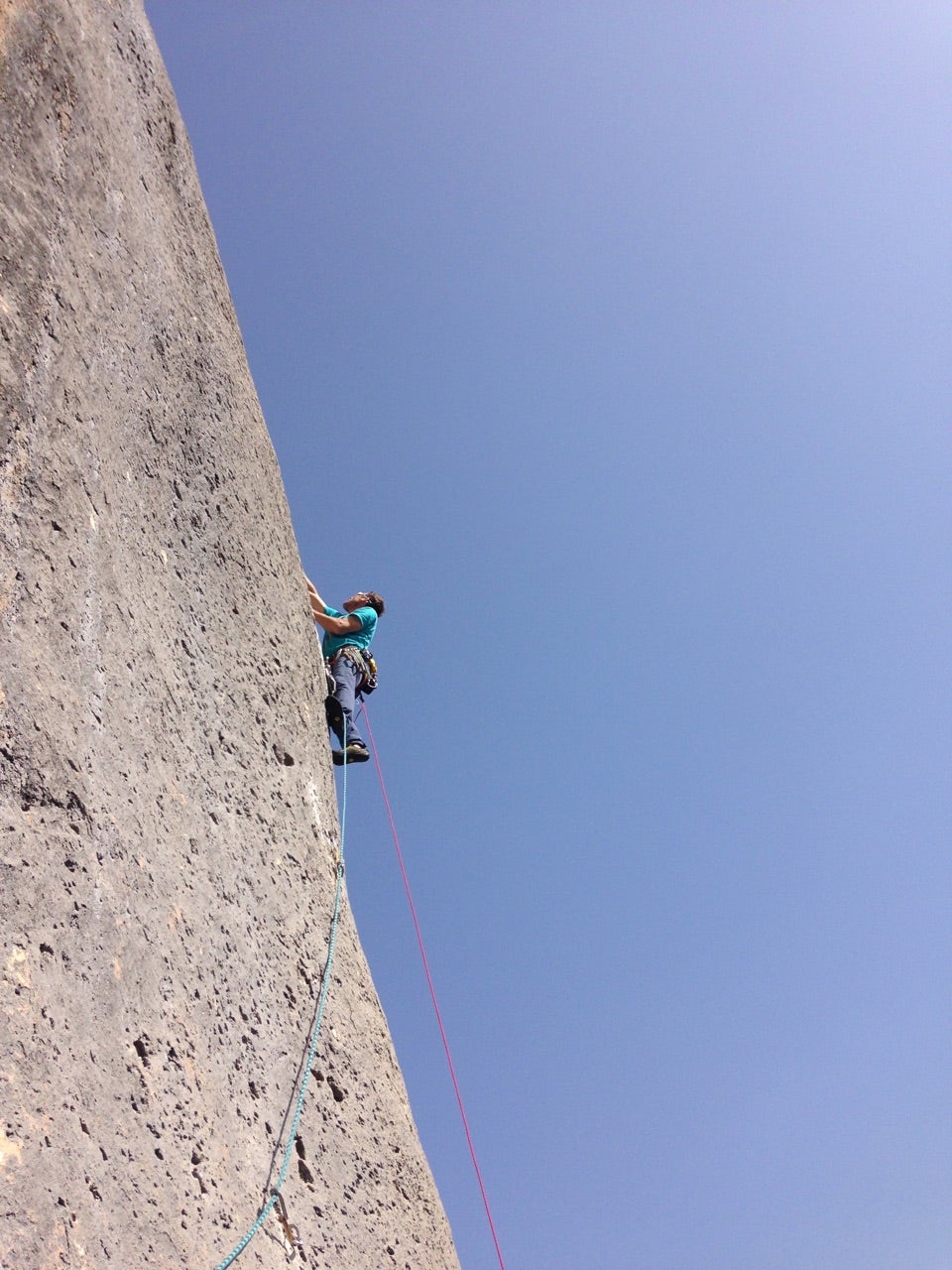 While the Verdon is most famous for its long routes, there are many single-pitch gems just below the rim. It’s common practice to lower or rappel down and climb these single-pitch routes, which can be a good idea for a semi rest day or when the weather is unstable. Be sure you have your systems, transitions and communication dialed if you choose to go down over the lip. Also, being brushed up on a 3:1 haul system is always a good idea in case you get in over your head.

Gear Picks for the Verdon: