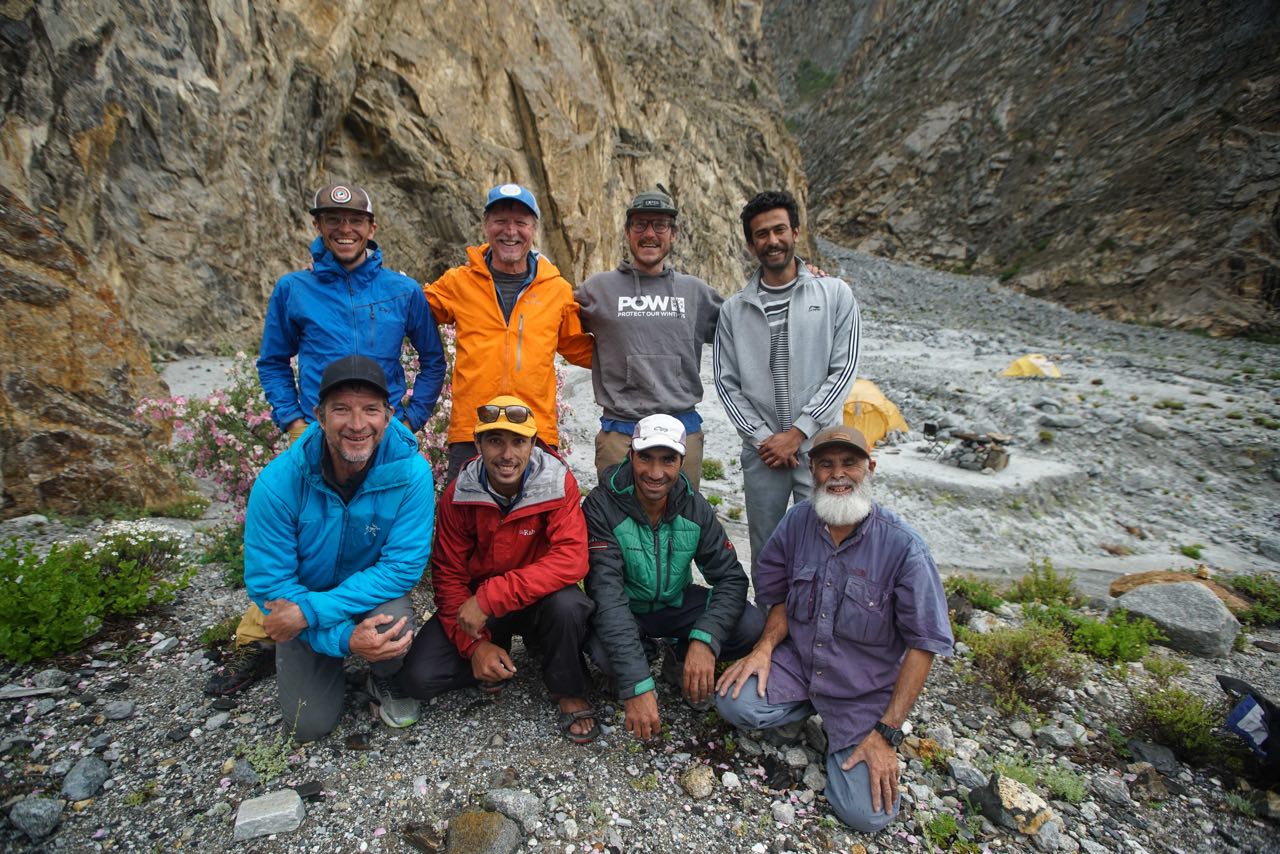 From July 31st to August 8th, 2019 Graham Zimmerman, Steve Swenson, Chris Wright and Mark Richey made the first ascent of Link Sar (7041m) in the Central Pakistani Karakoram via its 3400m Southeast Face. Having been the object of at least nine expeditions, the first ascent of this peak has been a highly sought-after prize for the climbing community. The team is calling their route the Southeast Face (M6+ WI4 90°, 2300m), but the grade does a poor job of portraying the challenge of this route that Karakoram veteran Swenson calls “one of the most complex and difficult routes I have ever climbed.”

Swenson originally attempted the route in 2001 with George Lowe, Joe Terrevecia, Steve Larson, Andy Tuthill and Eric Winkleman. It was an amazing opportunity for the team since the face lies very near the contested border between Pakistan and India (known as the actual ground position line or AGPL), and the eastern aspects of the mountain had not been permitted since the mid 1970’s when a Japanese team made the first attempts to reach the summit. Despite the fact that the team did not make it very high on the peak, it inspired Swenson to return, and he made repeated attempts over the following decade to get another permit for the peak but was denied. 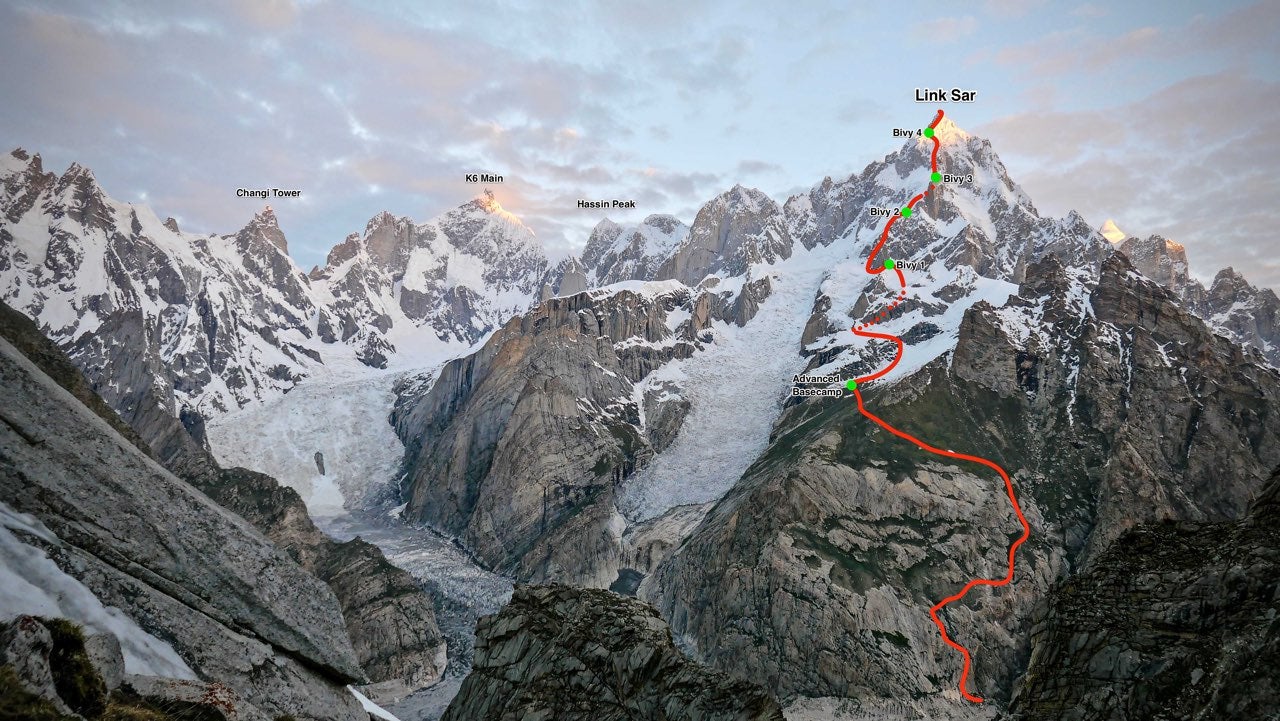 Over the ensuing years, a number of attempts were made on the peak’s western aspect via the Charakusa Valley. In 2015, Swenson and Zimmerman, along with Scott Bennett made the first ascent of nearby Changi Tower (6500m) via its North Ridge (M6 5.10 A2, 1200m) and from its summit caught an excellent view of the massive southeast face, supplying better information about the best way to climb the route and further spurring motivations to attempt the mountain.

In 2017, it looked like the area was once again opening to climbing, and Swenson and Zimmerman were finally given a permit to access Link Sar’s southeast face. They also invited Wright on the expedition as he and Zimmerman had formed a strong partnership in the mountains of Alaska. During this two and half month expedition, the team experienced atrocious weather, and after multiple attempts reached only 5900m. Despite the failure to climb the peak that season, the team made a myriad of observations of the face's immense complexities, providing them with the information that they needed to make an ascent that was safe from the many objective hazards that litter the wall.

This year, the three climbers, alongside Mark Richey, with whom Steve won a Piolet d’Or (the equivalent of a gold medal in alpinism) in 2012, returned to the southeast Face. They departed their homes in the United States on June 4th.

The approach to the peak is made via the Kondus Valley and then up the Kaberi Glacier. Since it is in the militarized area near the AGPL, there is a road that runs adjacent to the glacier and up to the location of the team's basecamp where they arrived on June 10th. The elevation of this basecamp was 3600m.

From their past experience, they knew one of the primary cruxes of the route was acclimatization. The Kaberi valley is one of the deepest in the Karakoram and its walls are precipitously steep. On most 7000m peaks, a nearby easier 6000m peak would be used to acclimatize before starting on the primary objective, but no such peak exists in the Kaberi, so the team was forced to use the lower portions of their route on the SE face for acclimatization. To help with this, they set up an advanced basecamp at top of the meadows that make up the bottom 1100m of the face. In order to do this, they hired 5 local porters for whom they fixed a network of ropes on a series of easy, but exposed, low 5th class slabs to ensure their safety while making the ascent to ABC.

The team had ABC established by July 4th, but at this point were forced to wait for the conditions on the mountain to improve. The 2018-19 winter in the Karakoram was one of the snowiest on record, making the mountain very dangerous, a fact that was emphasized by a size 3 wet slab avalanche that was observed low on the mountain from ABC on July 7th.

Thankfully, the weather in early to mid-July was excellent and allowed for conditions to improve considerably at which point the team was able to climb to 6000m on the peak and consider themselves sufficiently acclimatized to attempt the route. 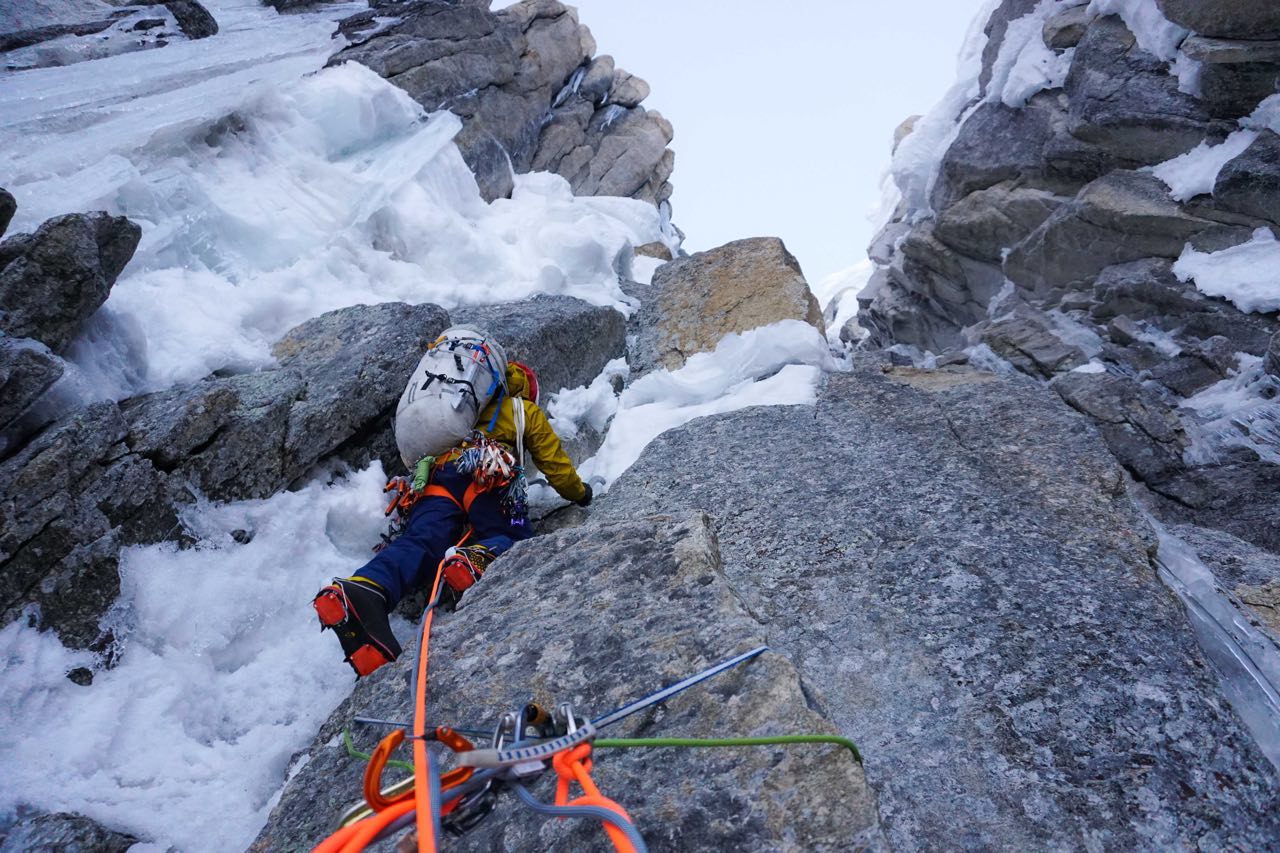 On the morning of July 31st, the team started their alpine style attempt on the route from advanced basecamp at 7:30am (the disparity between the 3400m face and the 2300m ‘route’ come from the fact that they started from ABC). During the cool morning hours, they climbed steep snow and glacial terrain to a camp at 5100m where they spent the afternoon resting before launching on the lower crux of the route in the early evening.

Climbing at night was a necessity due to the intense heat at that altitude on the southeastern aspect. The crux section of the route involved 10 sustained pitches of climbing up to M6+ that even in the middle of the night were in very warm, wet and subsequently challenging conditions. Arriving at an excellent and safe bivy at 5900m around 9:30am, they once again stopped to wait out the heat of the day as well as recover from climbing through the night.

The following morning, they departed just before dawn. Above the second camp was a serac barrier that was both a cause for concern in terms of overhead hazard, and presented a considerable challenge to circumnavigate. It is important here to note that this serac wall had changed significantly from when the team had observed it in 2017 and presented as a major surprise. Luckily, the team was able to find a way around the right hand side of the wall that involved minimal exposure and well formed WI4 ice climbing. After one hundred meters of easier climbing, the team found themselves at another large and safe bivouac at 6200m situated below the final mixed band of the route.

At this point, the team hunkered down for a forecasted 36 hours of bad weather that arrived in the mid-afternoon of August 3rd, their 3rd day on the route. 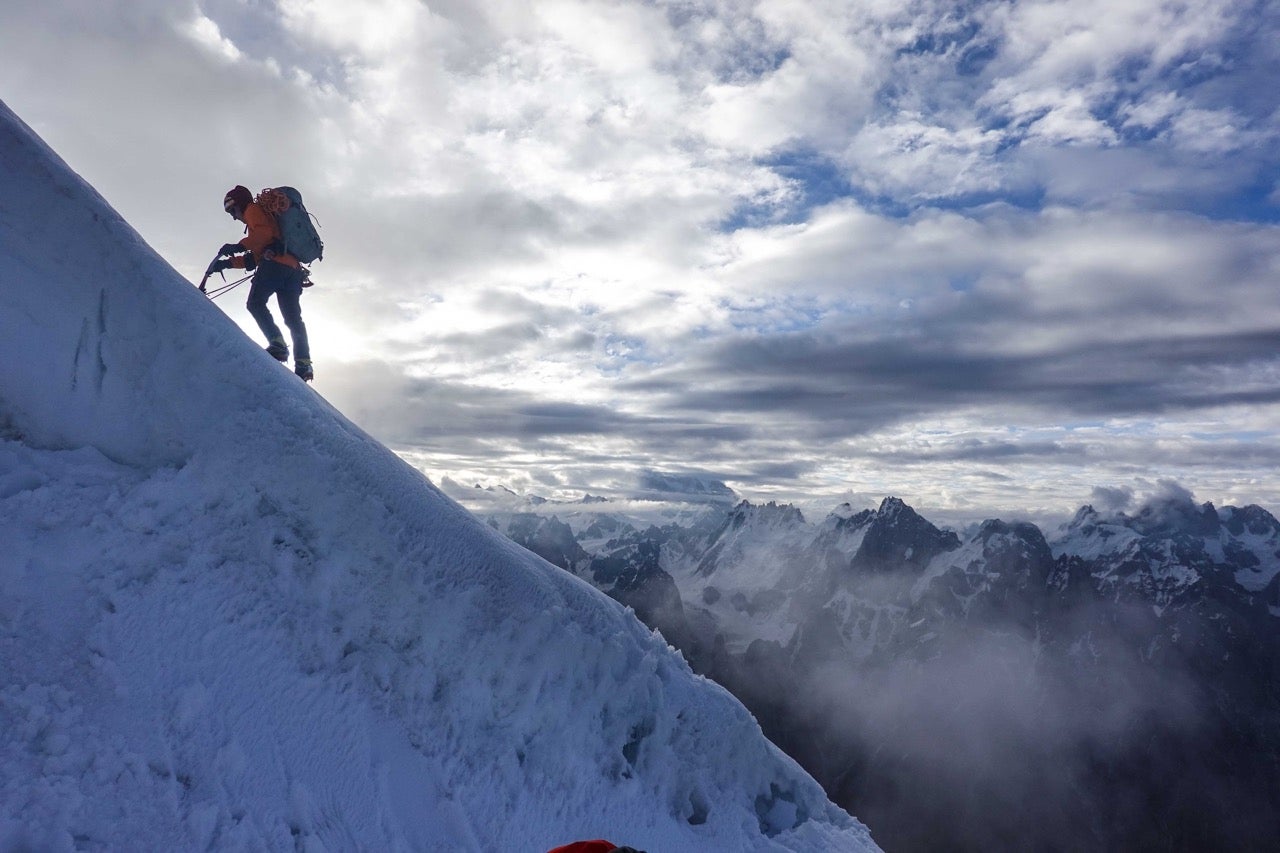 On August 5th, at 3am, they departed their 3rd bivy in poor weather relying on the clearing forecasted for that morning. An hour above camp, they were forced to stop as they were facing technical mixed climbing in weather that had still not improved. They dug a snow cave in order to stay warm and get out of the blowing snow, where they waited until 9am.

When the weather finally cleared and they were able to continue, three excellent pitches of ice and mixed ground led to a large snow fin that involved five pitches of very challenging and unprotectable snow climbing and one pitch of steep and hard serac ice. At sunset, they finally reached a good bivy site at about 6700m.

Starting at sunrise on the 5th of August, the team left their tents in place and launched for the summit. An excellent pitch of alpine ice led to more challenging snow climbing intermixed with short sections of ice and mixed terrain. The nature of the climbing gave the team little confidence in their ability to reach the summit, even as it seemed to loom just overhead. In the final dramatic pitches to the summit Wright gave an excellent effort, reaching a point ~20m below the top after a long lead block, where he was turned around by steep, unconsolidated snow. Richey, who has a deep background in the steep, challenging snow conditions of Peru then set off into the final meters reaching the summit at sunset.

As can be imagined, the team was elated. The route had taken 6 days of hard climbing during which they ascended over thirty technical pitches and covered roughly 8000 vertical feet from their advanced basecamp and about 11,300’ from BC.

On August 8th, 9 days after departing, the team arrived back at advanced basecamp. The descent off the peak had taken three days due to the challenge of making anchors in the bad snow conditions and the need for the team to once again wait out the heat of the days. This first ascent of Link Sar had taken a maximal physical and mental effort from the entire team. It required all of their collective experience and strength. They are proud to report that the intense decision making required to make the ascent safely came from a very democratic, discussion-oriented decision making process without which they do not feel that they would have reached the top of this elusive and beautiful summit.

Finally, it is important to note that the expedition was undertaken adhering to strict environmental standards, deep respect for the communities local to the Karakoram and that the carbon footprint incurred by the expedition has been calculated and will be offset (with the help of Protect Our Winters).

The team would like to first and foremost thank their families and friends for supporting them in the endeavor to climb this peak. They would also like to thank their sponsors and those who provided them funding for the expedition: The American Alpine Club, The Mount Everest Foundation, The British Mountaineering Council, The New Zealand Alpine Club, Outdoor Research, Arctyryx, Exped USA, Scarpa, Petzl, Julbo USA, Trail Butter, Picky Bars, Pro Bar, Mountain Safety Research, Thermarest, Voile, CiloGear, Transcend and CW-X. Additionally the team would like to thank Jim Woodmency for his excellent weather forecasting. And finally, they would like to thank those in Pakistan who helped them make this trip happen, namely Nazir Sabir Expeditions, Alpine Adventure Guides, Captain Umair Tariq and their dear friends and local staff, Hajji Rasool, Nadeem and Fida Ali.