Have You Ever Been "Butted"? 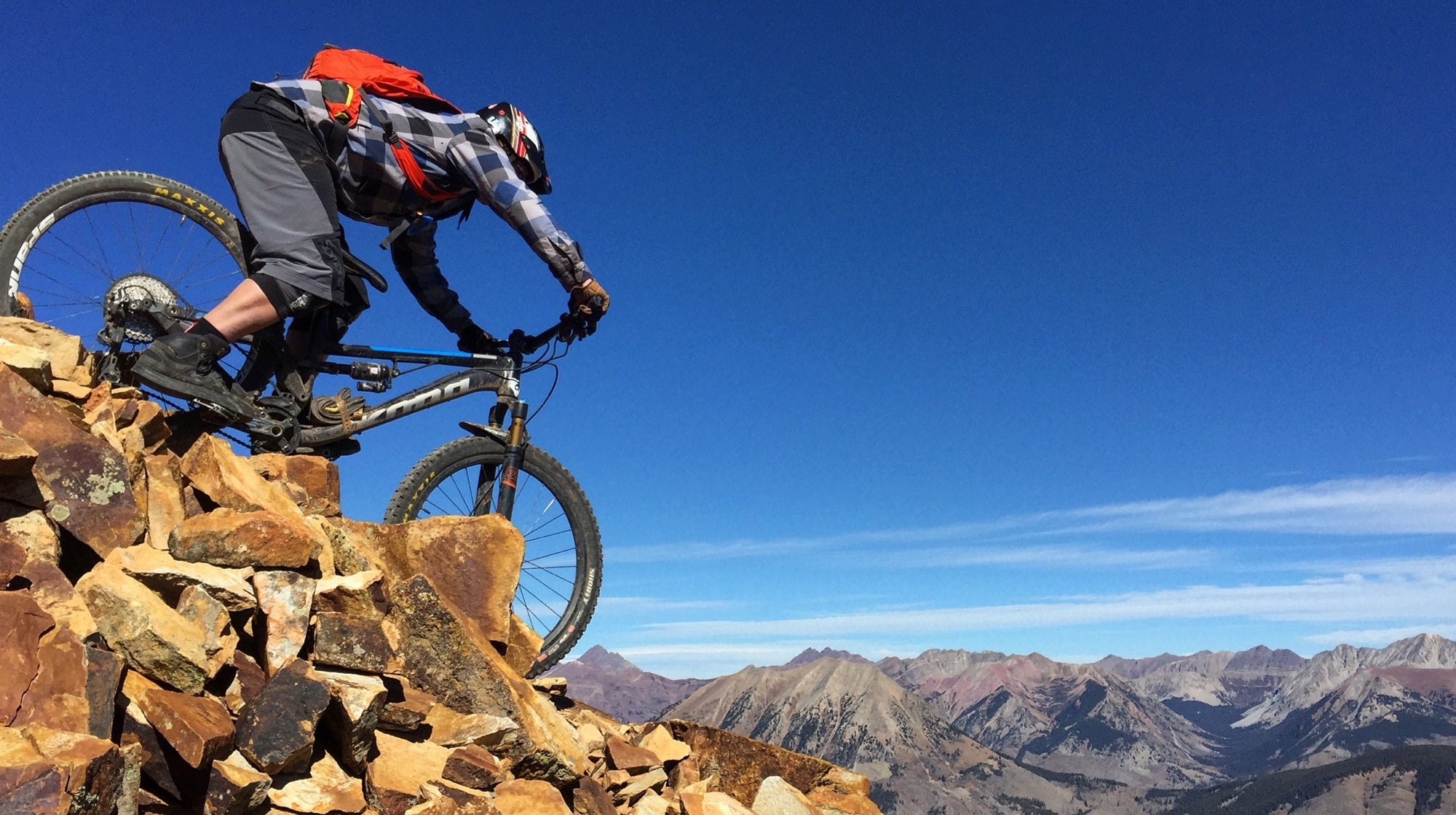 Coming from sea level, Pat and I were huffing shortly after we left the trailhead at 9,000 feet. We wheezed our way after Lawson— a splitboarder first and a bartender second (or third)—up nearly 4,000 vertical feet. Lawson was going on his fourth season there in Crested Butte, but I’d just recently convinced Pat to join me in moving to the mountains. This is your new backyard, I said to myself, imagining an entire season of snowboarding in these mountains. Then we saw them: a couple of specs at the summit.

“There are some people up there,” I said. Mesmerized, we watched as they descended the ridge with inhuman speed. “Holy shit! They’re on mountain bikes.”

Just below the final push—a narrow, aesthetic ridgeline scramble—we’d stopped for lunch, thinking we had the trail to ourselves. High above treeline, the season’s first snow held on northerly aspects, and clear skies offered views of the surrounding peaks. Lawson had pointed out lines he’s splitboarded, and with the devout respect and reverence of a religious man, lines he has yet to ride. We’d felt fairly badass ourselves up until now.

The two bikers bounced down the ridgeline and into focus, dropping 3- and 5-foot airs onto landings with margins for error millimeters wide. To the right, a steep pitch that would end in a busted bike and maybe a few broken bones, and to the left, exposure the size of a sky scrapers and probable dismemberment.

In minutes, they made their way down to where we stood. I snapped a photo of the first rider sending one of the cruxes of the ride—a steep, rocky staircase of wobbly shale ending in a hefty drop. His buddy rolled up to the feature and bailed at the entrance, past which commitment was requisite. He tried and bailed again before walking his bike down the staircase, clearly not feeling it. I didn’t blame him one bit—the very prospect terrified me, and I was just a spectator. 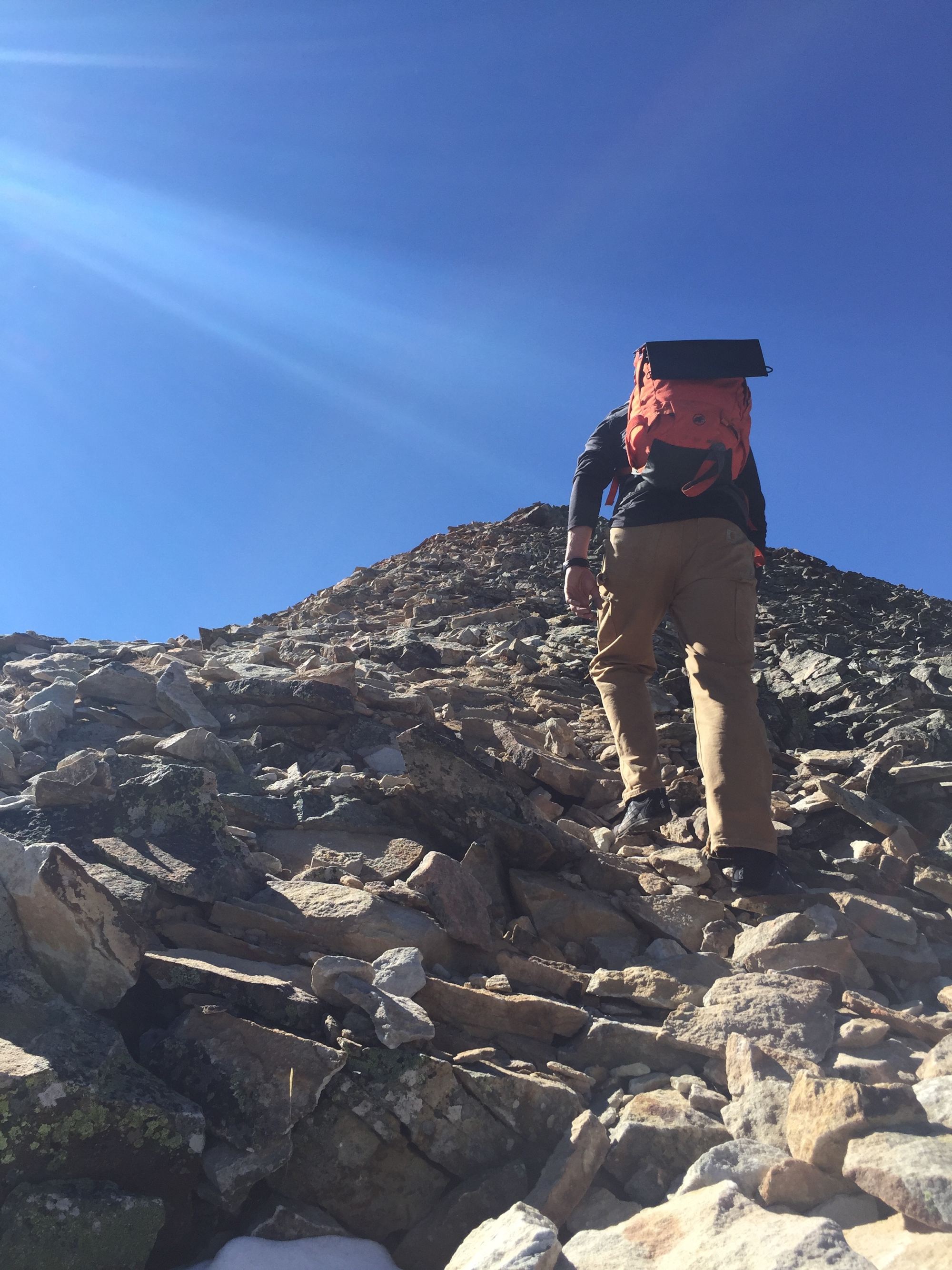 We traded hellos, and Lawson commented, “You just butted us.”

“Butted? As in, Crested Butte?”

“Yeah—when you think you’re doing something badass, but someone comes and does something way more badass than you.”

The mountain bikers laughed, said adios, and kept on trucking. We hiked the ridge, at times relying on our hands to pull our way up to the summit, cursing as we contemplated the physics of mountain bike tires hugging a tight line down the unforgiving lack of trail. Webster might disagree with treating the word butte as a verb, but to Pat and me, it made perfect sense. We’d been butted—hard.

“That’s probably the most gnarly butting of my life,” Lawson laughed. “But it happens all the time.”

He talks of grey-haired dudes in spandex blowing past him on the skin track and toddlers hucking cliffs at the ski resort. If those buttings had been single-slice servings, then the mountain bikers had just slammed entire humble pies into our faces as we stood there grinning like Bozo at the high-alpine circus.

Lawson is no athletic slouch, either—quite the contrary. But from my initial understanding, towns like Crested Butte attract the athletic and adventurous like chum attracts sharks, and in turn the town breeds a sort of Darwinian super ecosystem, where the strong compete with the strong and become even stronger.

I’ve heard similar tales come out of ski towns like Jackson and Truckee, or even outdoor hubs like Denver or Salt Lake. The truth is, you can get butted anywhere—and I often do. I’ve been outrun by men twice my age and outsurfed by dudes twice my weight. The evidence is clear: I'm simply never going to be the raddest person at the party.

Unless you’re an elite athlete who’s never lost a race, chances are you’ve been butted as well, at least a time or two. It’s an inevitable aspect of getting outside and getting after it. Instead of getting bummed when I get butted, though, I prefer to get stoked. Because when other people do rad stuff, it makes me want to do rad stuff, too. Getting humbled by the accomplishments of others inspires me—to get fitter, to go bigger, or simply to step out of my own comfort zone. And maybe, next time, to take a tougher line than I'm used to.