How 5 Everyday Adventurers Contributed to Science 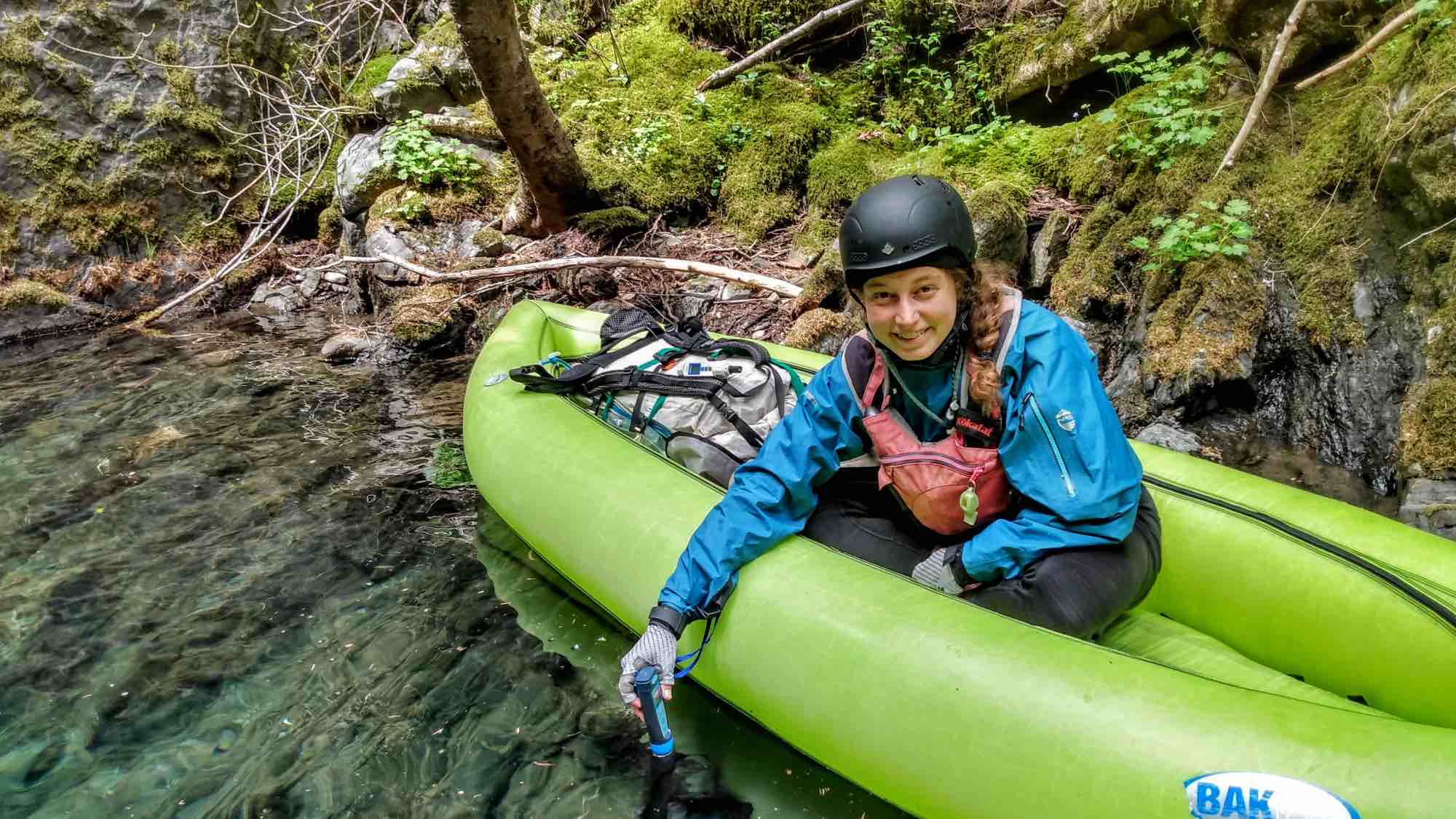 Data they collected are helping save trees, rivers and wildlife.

Have you ever wished you could add a new level of meaning to your outdoor adventures? Gathering data for scientific research is a great way to do it. Bozeman, Montana-based nonprofit Adventure Scientists can help. They make it easy for volunteers, like the ones featured below, to collect the high-quality samples scientists need for their work. In turn, this research can help us better take care of the wild places we enjoy.

Here are five different ways everyday adventurers have contributed to citizen science on their adventures.

Emily Hammel was leading a teen biking trip across the country in 2013 when their group was struck by a driver distracted by texting. One of her students, 18-year-old Merritt Levitan, was killed. At the time, Emily didn’t know if she could face biking again. Now she rides regularly for Text Less Live More, an awareness campaign about distracted driving created by Merritt’s friends and family. Emily always looks for ways to make her cycling trips meaningful.

As an Adventure Scientists volunteer, Emily and her friends Conor O’Brian and Matt Duncan rode up to the 10,000-foot-plus crest of Beartooth Highway near Red Lodge, MT. Along the way, they recorded observations about wildlife sightings and roadkill for the Montana Wildlife Connectivity project, which aims to provide road and wildlife officials with the data they need to help reduce animal-vehicle collisions.

Emily and her friends marked the anniversary of Merritt’s passing during the trip. “It felt like our journey had a bigger purpose,” Emily says. “We were not only getting to be outside in that beautiful environment, but supporting scientists and research committed to preserving that environment for all its users—bikers and wildlife included.”

Read about how the trio turned their data-collection trip into a week-long, 400-mile loop through the Beartooth, Pryor, and Bighorn mountain ranges of Montana and Wyoming on the Adventure Scientists blog.

For Ellie Friedmann, volunteering with our Wild and Scenic Rivers project gave her a new perspective on the rivers where she guides with the Northwest Rafting Co. in southern Oregon.

Ellie and her colleagues completed a five day backpacking and packrafting trip in the Kalmiopsis Wilderness, a landscape the Forest Service's website describes as "a harsh, rugged area with a beautifully unique character that resonates with anyone who ventures into its interior... characterized by deep, rough canyons, sharp rock ridges, and clear rushing mountain streams and rivers."

Along the way, Ellie collected data on water quality for Adventure Scientists’ Wild and Scenic Rivers project, which aims to fill data gaps in agencies’ assessment of river health. In a blog post about the trip she writes: "We tested multiple sites on both established (Chetco, North Fork Smith rivers) and proposed (Baldface, Chrome creeks) Wild and Scenic Rivers. While these areas are specifically valued for their water quality in the Wild and and Scenic Rivers Act, they are rarely tested. We were able to prove that they are still extremely healthy at these upper reaches."

Check out Ellie's full blog post to learn about the carnivorous plants they encountered, the trek they took to get to the headwaters and access the main stem of Chrome creek, and why the group feels strongly that the waterways and tributaries they saw deserve designation in the National Wild and Scenic Rivers System.

A Summer of Giving Back

Volunteers Ann and Dylan Kuhn spent this summer taking multiple trips for data collection on some of California's Wild and Scenic Rivers. They visited Cottonwood Creek, which flows from the peaks of the 14,000-ft high White Mountains into the Great Basin Desert. The waterway is home to one of the rarest trout in North America, the Paiute cutthroat. The couple also visited Glass Creek, in the Owens River Headwaters of which sustains some of the richest riparian habitat of the Eastern Sierra.

"We had a lot of perfect desert rest along with, I believe, a successful data collection which we have submitted to Adventure Scientists via their app this morning," Ann wrote after their first trip to Cottonwood Creek. "We will be going back two more times to the same location and three more times to somewhere below the headwaters by September."

Even with forest closures due to wildfire and smoke, Ann and Dylan successfully collected data at three locations three times over the summer season.

"We became expert butterfly stalkers, comically creeping through the meadows with oversized nets in hand, eyes peeled for the flutter of wings," writes Julia Lichtblau of a trip into the Sierra Nevada's Desolation Wilderness for Adventure Scientists’ Western Pollinators project. Butterflies are considered indicators of biodiversity. Although backcountry areas can be biodiversity hotspots, researchers are lacking data on butterflies in these remote areas. The data collected in this project detail butterflies' abundance, diversity, and distribution in the wild, remote lands of the Western US. These data will be used by land managers to inform conservation decisions.

The experience changed the way Julia saw mountain environments, she says, bringing her in tune with the complex ecological relationships between delicate pollinators and the colorful alpine flowers on which they relied. Julia cemented the memories in her mind with sketches and watercolor drawings of the butterflies and flowers she saw. You can read more in Julia’s blog post on the Adventure Scientists website.

How does the health of a river change when a trail becomes popular, or a campsite on its banks is at max capacity every weekend? The managers along the Big Sur river in California have a chance to find out thanks to volunteers Jon Hart and Leana Goetze.

The couple timed their first data collection trip perfectly. The area they hiked into has been closed to the public for about five years, after multiple, intense fires swept through the surrounding forest. In April, a trail to a formerly-popular campsite opened up. Leana and Jon were the first to hike along the trail, carrying field probes to measure water quality along the way.

"The water is essentially at the best condition it has ever been," says Jon. "It will be interesting for the agencies and everyone involved to see how that changes."

Leana and Jon hiked ten miles in, climbing along a rugged trail to reach the campground. They spent two nights and three days in the area, battled poison oak, ticks, sampled on both the South Fork and North Fork, enjoyed stunning views, wildflowers and, even spotted a few newts as well as a Pacific lamprey.

They also noted about 20 other groups of people recreating along the trail. The duo will go out again in a few weeks, collecting data that can reveal how the water quality is affected by increased foot traffic, camping, and other recreation.

Jon and Leana are both wrapping up their Master's degrees in environmental science and management at UC Santa Barbara. The trip was a perfect fit for them. "It matches our two main passions: Being outside, backpacking, and recreating while helping to conserve the environment." Leana says.

The duo were collecting samples for Adventure Scientists' Timber Tracking project. Scientists are using the leaf and wood cores gathered by the organization’s citizen science volunteers to build chemical and genetic databases that can pinpoint the source of illegally harvested timber, ultimately protecting forest ecosystems.

Stéphanie and Josef live in Petersburg, Alaska, in the middle of the Tongass National Forest, along the Inside Passage. From December to January, they collected 81 samples of yellow cedar and western red cedar.

"We are really in the prime range of yellow cedar," Stephanie told us. "Some areas we just knew right off the bat that there are a slew of old growth cedars—like 1,000 year-old specimens."

They heard wolves singing and spotted wolf tracks. They also found one old yellow cedar tree with a long strip of bark removed from about knee height to as far as either Stéphanie or Josef could reach above their heads. The tree was a "culturally modified" tree, evidence of human interaction with nature. Indigenous and First Nations peoples, including the Lingít Aaní (Tlingit) and Dënéndeh whose traditional lands are in that area, have long used yellow cedar bark to create baskets, clothing, hats, and many other items.

"It's very wild and very remote, you need to bushwhack," Stéphanie says. "But when you are really admiring the environment you are in, you really start to feel the grandness of the ecosystem here and you feel a part of it."

How YOU can get involved