How Do You Say 'Adventure' In Norwegian? 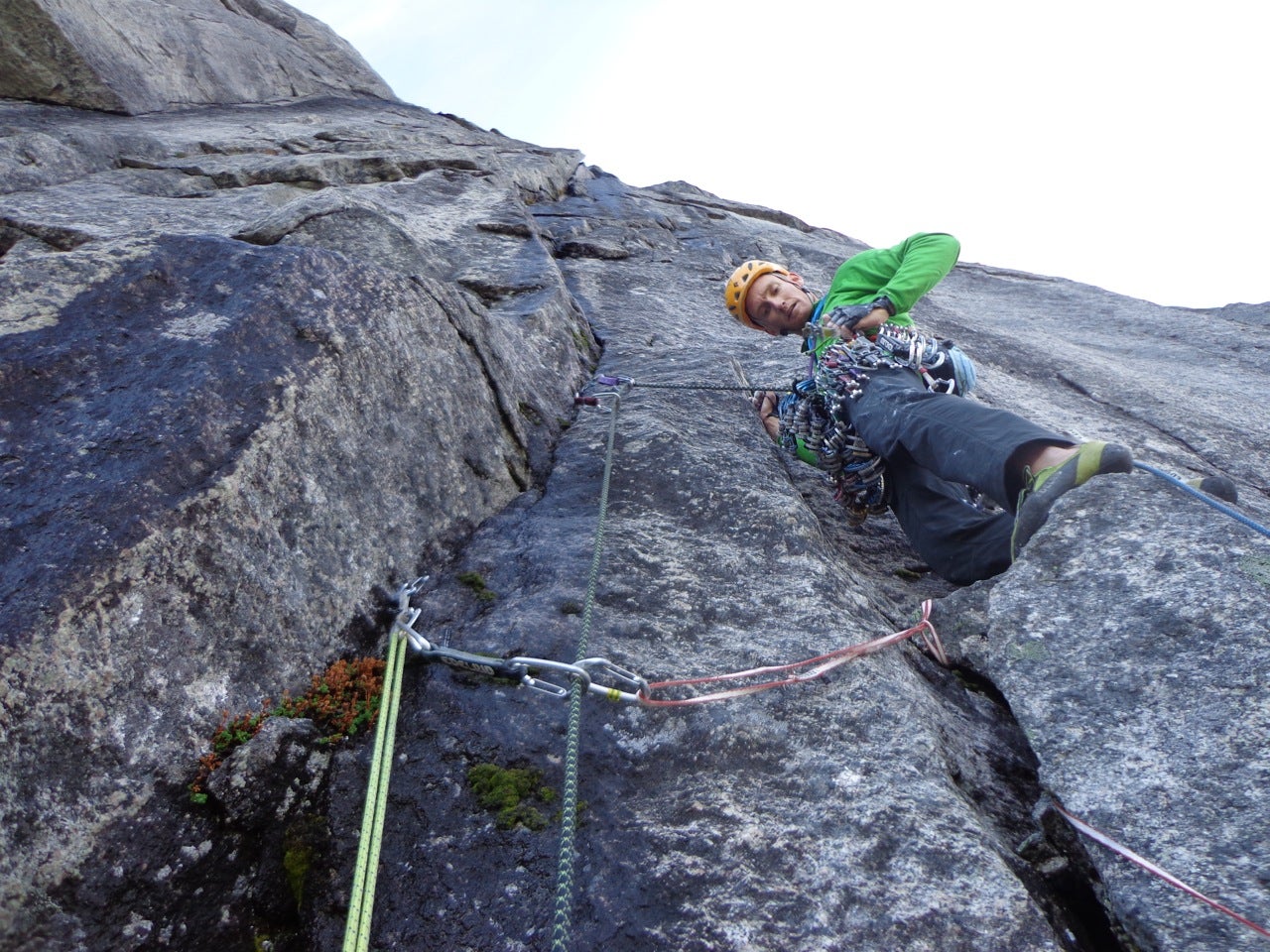 It’s a pretty stressful situation when you’re driving to the airport for an international flight, and you realize your girlfriend forgot her passport. Especially when home is an hour away. From that very moment, it seemed this trip would be a real adventure. After some speeding and a little bit of day-to-day couple arguments, we happily managed to make the plane. And here we are, Tromso, ready and super keen to tackle your beautiful cracks!

As we were checking the weather, eating a delicious salmon steak for dinner, we realized the weather would be just OK for the next two days, and then super rainy after that. So rather than going to bed, we decided to have a little evening stroll for dessert, followed by a romantic night in Hollenderan hut. It was quite late already, but as the sun never really sets at this time of the year, after an hour drive from Tromso and a two hour walk, we arrived at midnight in a lovely little cabin, and guess what? Alone! The next day, the sun and the clouds—read: rain—played a few tricks with us—read: a morning bail at pitch two. So we went back to our little hut, and the sun came out again. What! So we went back to the same spot in the afternoon and climbed Thanatos (7a+). It’s an amazing 250-meter climb with a memorable 5.11 hand crack on perfect, steep granite—absolutely world class.

The next day, we climbed Halvmanerisset (6c), also super cool and all cracks from finger to hand. As we were just down from the climb, the sky decided for us it was time to go down for a beer in town. But nothing crazy, as Denise and I were both quite tired and the beer price in Norway doesn’t make you want to go wild.

During that first day, we learned some key things about climbing in Norway. First, you’d better have your rain jacket close, and sometimes climb in it. Secondly, in order to make the best of your climbing trip, you have to be ready to climb when the sun is shinning, whether it’s afternoon or nighttime. Thirdly, we learned to take more gear than usual, as the climbing ethic here is really pure, which means no bolts, no fixed anchors, no stuck gear whatsoever. So if we didn’t want to jam our hand or stack two fingers in the crack and belay off of it, we should bring more gear!

After two forced rest days on a smoked salmon diet, we decided to go try Norway’s most famous little big wall, Blamannen. It has some of the hardest multi-pitch trad climbs in Norway and is notorious for being very adventurous and tough. The wall is “only” 400 meters, but it’s vertical from the very first pitch. It’s north facing, and all the climbs are hard, usually done by aid climbing. For once, we decided to try an early start, out of old habit, to try to climb Pishtaco (A2/7b+). We had to wait when we reached the wall, to know where to go, as the wall was still in the clouds. It had just rained during the night, and we couldn’t see the start of the climb. Welcome to Norway!

Suddenly we could see a black wet streak and we were both hoping it was not our line, but as we were getting closer to the wall, we realized it was. “The free line must go slightly to the left of the wet stuff,” I told Denise in my usual positive mood. She shook her head. I climbed the first pitch free and I was quite right, but it turned out I was totally wrong for the second pitch, and the rest of the climb. “It would be a cool line to do in the winter, if it froze,” yelled Denise at me as I was fighting to go up a soaking wet dihedral—in vain. After a small whipper, I had to surrender, and hang-dogged the rest of the second pitch. It was really too wet, and so was I. Eventually, we prefixed the first two pitches and decided to go down to Tromso for some more salmon steak, and hoped the night and the midnight sun would dry our climb.

The next day, we had a late start and went back up, but the route was still very wet. So we had to change our original plan to free climb the route and did the climb partially free, partially aid, and arrived on the top just after 1 a.m. It was still an amazing climb.

After a few hours sleep, we decided to drive further south to Lofoten for more trad. Lofoten is a small group of islands situated six hours south of Tromso, and it has some of the most popular trad climbs in Norway. It’s slabbier and busier than the Tromso area, but the climbs are really high quality and the whole atmosphere is super friendly. You can camp anywhere, and most of the climbs are just above the shore. Everything there is absolutely stunning: the scenery, the landscape, the colors of the sky and even the architecture of the small villages. The weather is usually warmer, as well, thanks to the Gulf Stream.

Afraid of the crowds, we turned our head to a remote climb, “the Bonatti spur” of Lofoten, named Storpillaren (7a). It’s a 600-meter pillar with some pristine corners, splitters and even some chimneys. It’s a great adventure, involving some unforgettable cracks, bushwalking and swamp crossings—I even learned a new word on the descent. While reading the guidebook, I didn’t know the meaning of “hopping” as in “boulder hopping.” An hour of boulder hopping is one of the best bonding experience for a couple. The approach and the descent came as a surprise, as they took us far longer than the actual climb. But that’s one of the many good things about trad climbing, right? Trad climbing in Norway offers adventurous experiences, something we read between the lines on the climbers‘ bar in Lofoten: “Sport climbing is like eating at McDonalds—You know what you get.”

Gear I Used or Would Recommend for a Norwegian Climbing Trip