How To Ski In Windy Conditions 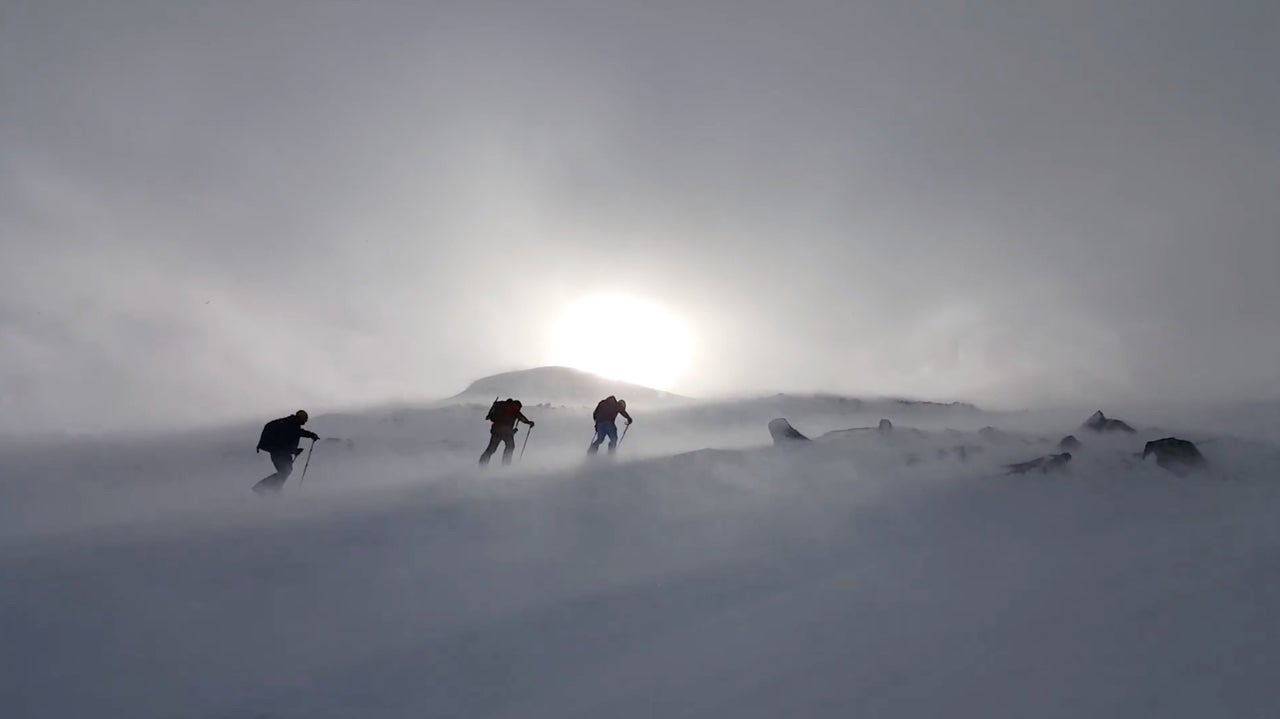 If you ski long enough, you can’t avoid it. At some point you’ll find yourself leaning hard into screaming gusts while skinning uphill—or shivering on a chairlift that’s about to drop you off in a whiteout. At the very least, high winds can be annoying. They can even be miserable—and sometimes dangerous. IFMGA mountain guide Martin Volken knows all about it.

“The Alps get these Foehn winds, sort of like a Chinook wind, that can be very extreme due to the massive relief,” he says, remembering one extremely windy day on the way to the Matterhorn hut early in his climbing career. “There are shale-type rock fields on the way up to the hut, and some of these espresso cup-sized rocks started to be airborne—that was certainly memorable.”

Winds like that can do more than make humans uncomfortable. “Consider how light snow is,” Volken says. “It’s often the moderate winds that created the biggest wind-loaded pockets. Super strong winds create something called turbulent diffusion, where the transported snow can literally end up somewhere in the atmosphere and end up in a different state. This is how the Alps, for example, get dust from the Sahara on a regular basis.

So how do you have a safe—and less miserable—day in the mountains on a super windy day? Volken has a few tips.

“Luckily I’ve never been in a wind situation where I closed the doors behind me, so to speak,” he says. “This is essentially what happened a couple of years ago on the Pigne d'Arolla in Switzerland which led to super tragic results.” (That day, eight highly experienced outdoorspeople died, including their professional guides, on a highly traveled ski route in whiteout conditions.)

Pack right for a windy day.

For a windy day, Volken recommends packing more layers. An extra down jacket, or an extra burly shell can help, but don’t stop there. In windy conditions, your hands and face are also at risk. To ward off frostbite or frostnip, pay attention to your hands and face.

“Take oversized mitten shells and put them on over your ski gloves,” Volken suggests. “And of course, there is the trusty balaclava.” Balaclavas range from hoods covering the neck, ears, chin and forehead to full-coverage masks leaving only the eyes—which should be protected by goggles or sunglasses—exposed.

Skiing in windy conditions can be very disorienting, especially in a ground blizzard. Have you ever gotten off a ski lift into a whiteout only to be unsure which way is actually downhill? Whether you’re risking a fall and injury inbounds or something of even higher consequence in the backcountry, this is the time to play it cool and under control.

“I like to keep folks pretty close together, ski near rocks and trees—anything to increase depth perception,” Volken says.

If you pay attention to avalanche forecasts, you’ll already have an idea when it might be a good day to stay home. When wind moves snow around, avy hazards can appear rapidly. But even if the snow conditions seem safe, wind chill can create a completely independent danger. For example, when it’s 20°F out but the wind blows 30 mph, the wind chill is actually only 1°. For Volken, wind chill hazard can be reason enough to bail.

Volken says he’s had to bail because of wind in all sorts of places—Chile, Japan, Norway, the Alps and around his home in Washington State. So when you look at the forecast, never forget to look at the wind and wind chill. And never forget the avy forecast.

Pro tip: Don’t lose your skins to a wind gust.

Gusty winds add extra spicee to the transitions from skiing uphill to skiing downhill. Ever tried to remove a pair of skins only to have them nearly ripped out of your hand? Or have the adhesive stick to itself in the wrong spot? Volken has a handy guide trick for how to fold your skins in windy conditions. Watch the video here.