How To Ski With Kids 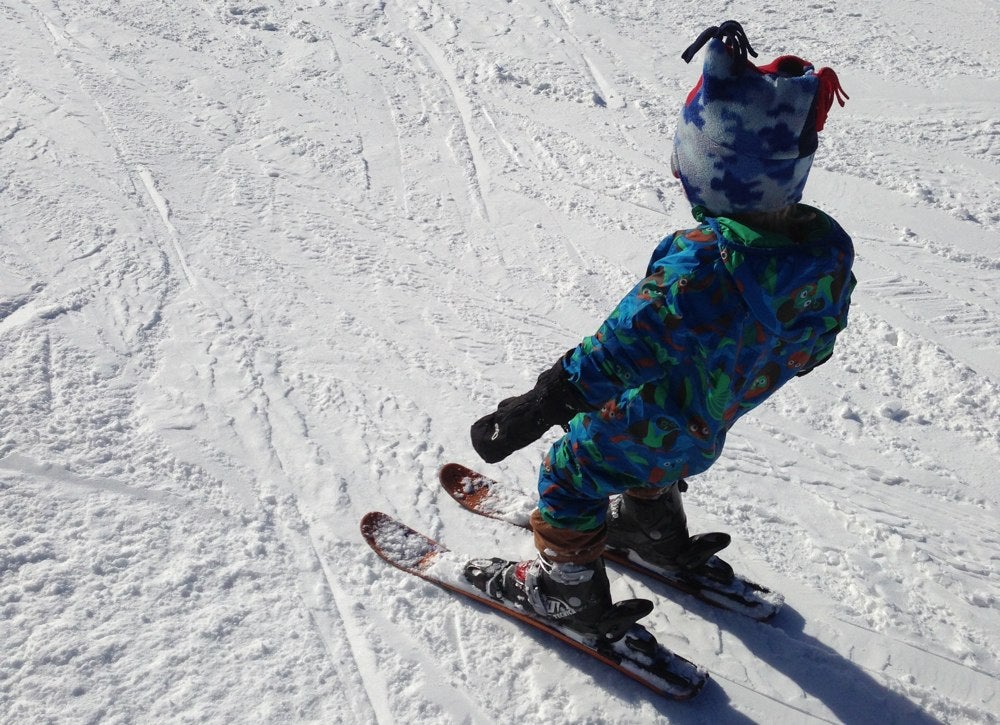 Day one found us with just the KID-SKI Happy Skis, plastic skis with scales and plastic straps that accommodate snow boots. These were very valuable for year one. You could see progression and the understanding develop that you could not cross your tips or you would anchor one of your feet. Another great value to these skis was picking him up for the chairlift ride. Once you go to plastic boots and real skis, you realize how awkwardly heavy they are on such a small person. The light plastic skis gives you some run through with lifting and loading, and with skiing with a little one between the legs.

I believe little ones are always learning, so when skiing with him between my legs, I would press down on the equivalent foot for him on whatever way we were turning. I thought skinning with a little one on the back was a burner, but skiing with them between your legs trumps that. It wants to get the lower back, but if you make your quads take it, your legs will be crying at the end of a short run. If you’re comfortable on a tele setup, your back will thank you.  I haven't tried skiing with a young one with the heels locked down, but the added ability to couch down and drop to a knee would save quite a load on the lower back.

Day one, season two with Happy Skis found the little guy saying, “My do it, my do it.” Go for it, little guy. And he really was. The thing was, I couldn’t ski on this set up. How is it fair to teach him on this? Running into another family with two children, the parent said “Wow, you need to get that guy on real skis. Your back will really like it, too.” By the next weekend we had skis, and the first run definitely proved to be a load off the back. Instead of taking much of his weight in my hands, I would just hold his thighs. He was taking all of his weight on his feet. I was now just holding the thighs to help him control his feet, and continuing my idea of pressing down on the appropriate leg for the appropriate turn, and then letting him go for the flatter second half of the run. This was thrilling for him for a few days, and then came, “My do it,” again. He wanted me to let him take on the whole run. The bottom part where there’s little pitch was not enough.

Going into the first year on real skis, I remember just one piece of advice given to me: Don’t use a harness, ski with them between your legs. You’ll run over them using the harness, and if you have them between your legs, you can jib them off of things and make it really fun for them. He was so right with jibbing them off stuff, and that just helped up the fun factor.

We’d just gotten him a full-body harness for the climbing wall that had advertised it was good for skiing, too. I attached a strap at each hip to help control the turning a bit more, and then another point of contact where you can tie in for climbing at the center of the back. This third attachment ended up allowing me to lift him easily, which ends up being a very useful way to just reset the situation. The next day or so, I watched a parent nearly plow into child. The trick was to set yourself up to the side, reaching back across the body to hold the harness. You’re in the blind spot; child is the car in front, parent the car just back to either side. But even in this position, it was still easy to just miss. 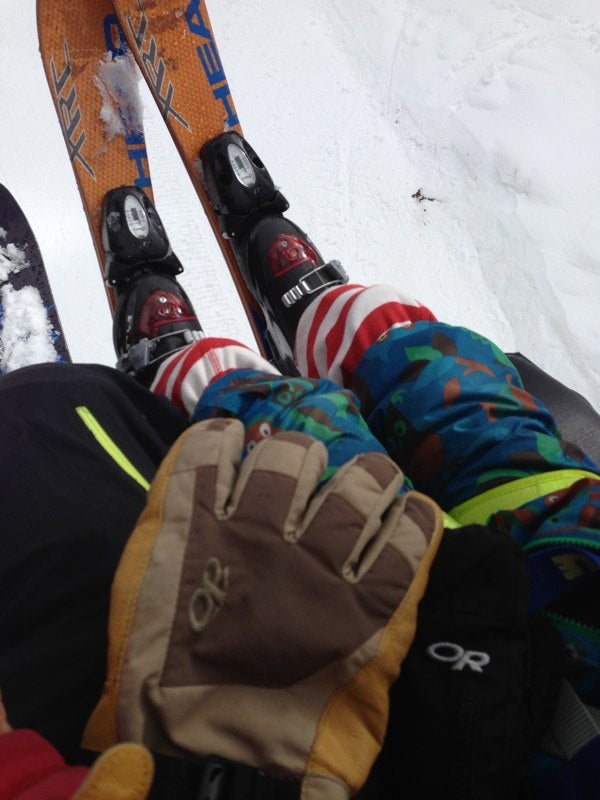 We called him the little owl engine because of his one-piece suit covered with owls, but mainly to up the fun factor for him as he led me down the mountain. Watching it all click was priceless. Anyone who has taught something at some time and then watched the students have it click knows it’s one of the great feelings in life. And doing it with your own child is just that. They soak it up.

He was looking for his fresh tracks and wanted to go in the powder. It was the first demonstration of him in complete control, and was so great. “My do it,” and he would make a sharp turn to go get some freshies. I then had to convince him that the corduroy was good as well.

On a day with fresh snow that was sliding slowly, we let him go on his own for the first time, top to bottom on the little 200-foot Kendal Mountain ski hill. The success was amazing. The fresh inch was enough to check his speed, but not enough to gobble him up, which would happen when he hit drifts of three inches.

If you go with the harness, it’s easy to leave the Edgie Wedgie out, which could be a good idea. Our little one didn’t want anything to do with it, and using the harness, I felt it would be fine as you can lift up on the center strap if they go for the splits. As I said earlier, they are always learning and often know more then we give them credit for. I think the Edgie just allows for a difficult transition later, just a crutch that prevents them from understanding the importance of keeping the skis from running in their own direction. The connection point I referred to allows you to not let it get to the point where they full split into face plant, but they get enough of a consequence to teach a lesson.

In the end, it’s all about fun. I don’t like bribery, but a few M&Ms in the pocket can help keep the fun up on the chairlift and prevent a bonk. Again, the final thing is keep it fun. If they want to just build a snow fort, then go ahead and build a snow fort. They’ll still be learning about snow.