In A Foreign Place, What Should A Woman Really Fear? 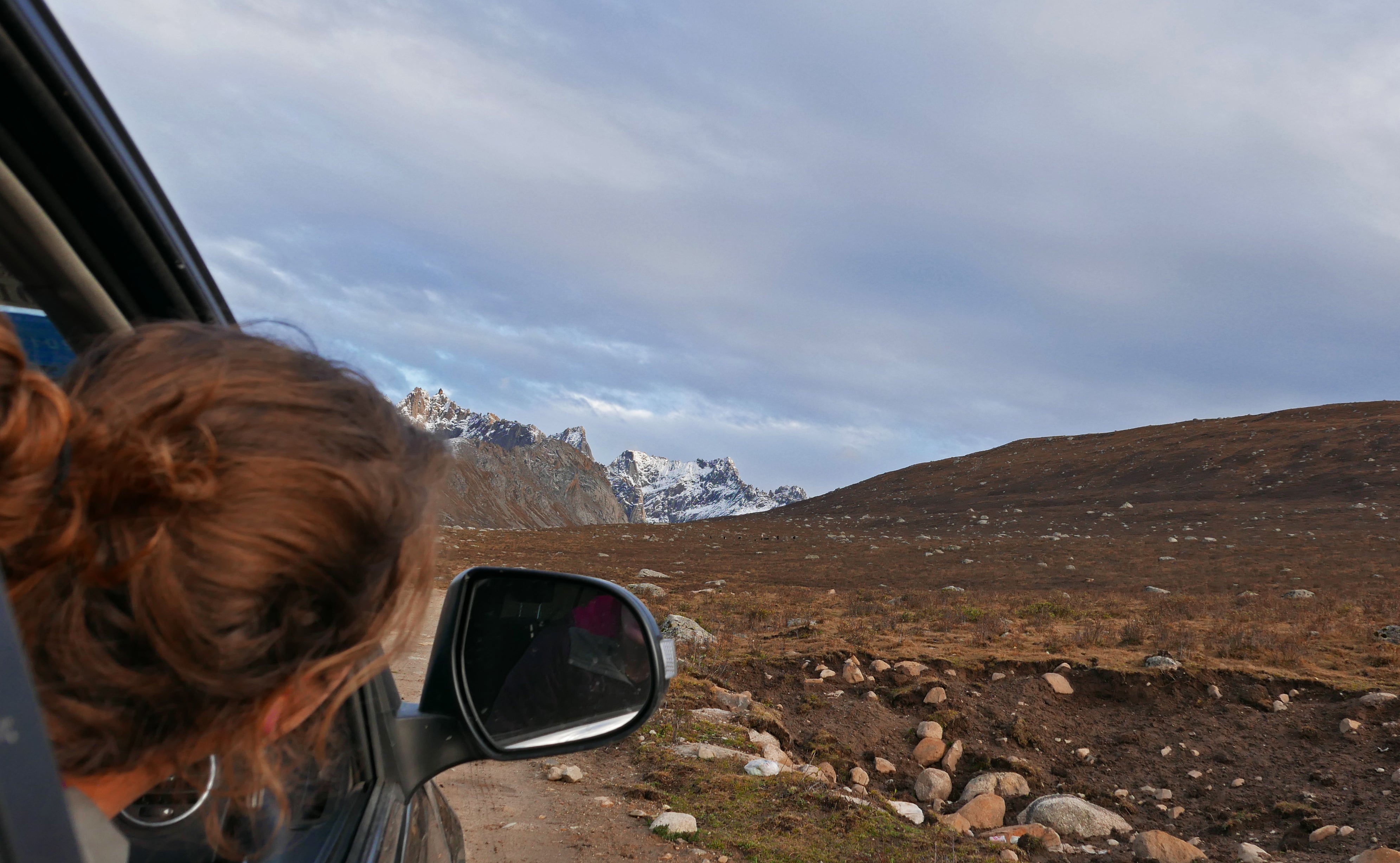 The leather of the passenger seat is cold. The sky is grey, and I’m sitting uncomfortably still as the driver lights another cigarette and packs the car full with sharp smoke. I’m in China and close to the middle of nowhere. I didn’t want to be so tense, and I didn’t want my hands to be so sweaty, but they maintained their death grip on a printed Google Earth screenshot that acted as our map. One of my best friends, Jessica, is in the back. She gave me a nervous glance. I exhale. Internally I begin to feel myself unravel.

Everything that passed by the car window seemed unfamiliar. Tibetan herdsmen droving their yak across the road, prayer flags strung up over high mountain passes, white canvas-tent settlements. Each new sight deepened the pit in my stomach.  For someone who typically has their emotions in check, I was frustrated by my anxiety. Expedition climbing is what I love. I am here to feel uncomfortable, to push my limits mentally and physically. Why are the things that I usually find exhilarating now surrounded by fear?

Our trip began a year ago, on an October night in West Virginia surrounded by editions of the American Alpine Journal. One singular photo, and we were hooked. We were going to a valley of the Nyainbo Yuze, a granitic range on the Tibetan Plateau, which had yet to be explored by climbers.

Gear, budget, time frame—the logistics all started to come together. We had hoped to find a reasonably priced method of transportation from the big city of Chengdu to the Nyainbo Yuze. But in the end we were left with a last-minute connection to a private driver who would make the trip, and we only had enough money for that trip to be one way. The locals told us we would fare alright on the return by way of hitchhiking and buses. We thought it would be a grand adventure. But within 24 hours I began to realize this would be the most fear-inducing decision of my life. 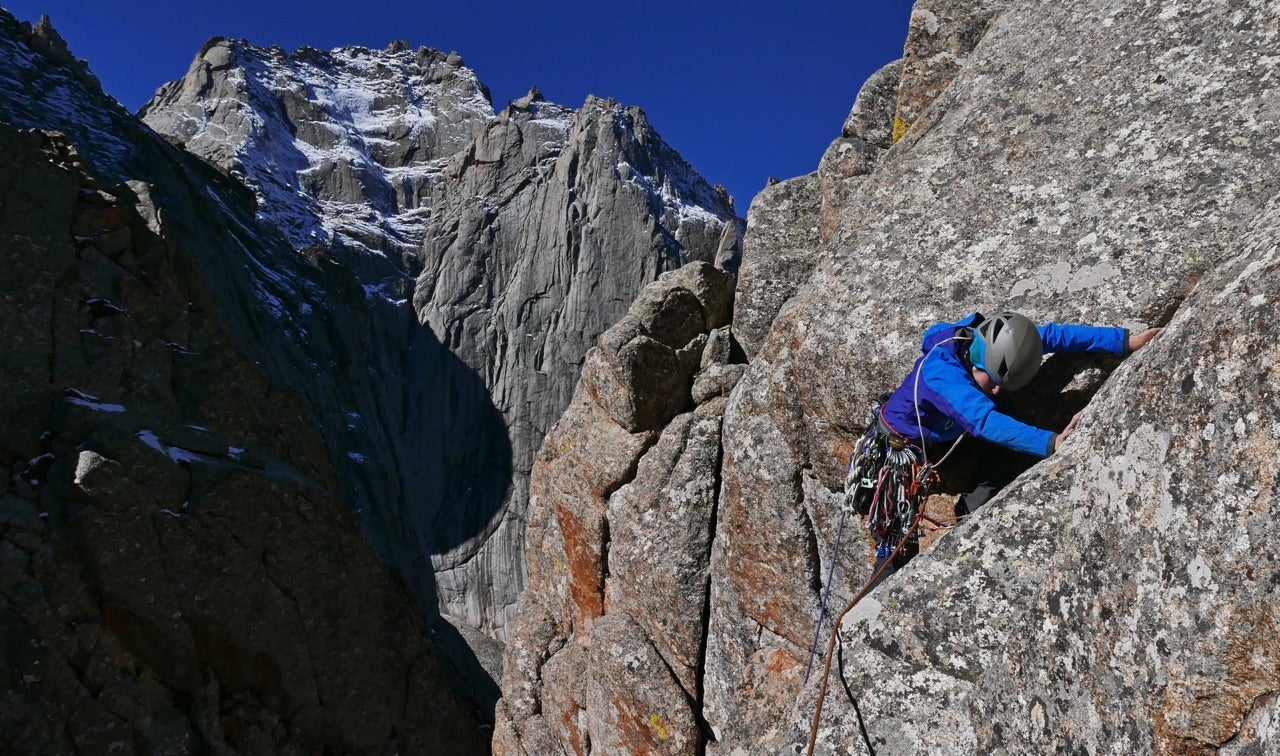 I had plenty of experience with fear in the mountains. Fear of failure, of falling, of ice and rock and snow slopes and lightening. Fear of death. But this fear was new and unexpected. For the first time in my privileged life, I was uncontrollably swallowed by my identity as a young American woman. I felt exposed and responsible and naïve. The driver, the men we passed on the road, the idea of hitch hiking, all terrified me just as I struggled to discern whether my fears were valid. I knew that the life I want to live is difficult when lived conservatively, when rules are followed and when fears are yielded to.  But for a woman, is there a line between pushing limits and being reckless? Was I being too anxious? Too untrusting? Or was it naïve to think that two girls could adventure in the same way that men can?

The sun had fallen behind the Nyainbo Yuze massif and the car had sunk into the muck of the road. Our driver helped us unload our bags filled with food and gear for the next three weeks. I was happy to be rid of him, and yet the weak part of me wanted to run, rip the door open and ride back to the city. I tried to take a deep breath, but at 4,300 meters the thin air simply made my head hurt even more than it already did. I made myself spin around, shoulder a bag and shuttle loads to where we would make camp for the evening.

Thankfully the morning dawned sunny and clear and I was relieved to receive a forecast showing a three-day weather window. After spending a day establishing our base camp, we picked two features that looked to serve as suitable warm-up peaks.

In an oxygen-deprived blur we worked our way upward, plodding over alpine meadows, hands on ropes and cams and crumbling granite. Soon we were atop the 4,700-meter summit. Was I happy? I looked back the direction we came, and everything but anxiety washed away. How on earth were we going to get back to Chengdu? There were no cars on that road. It would take days to get a ride. And how could we trust the people who would pick us up? The following day we climbed to yet another beautiful virgin summit; which, also, was ridden with negative thoughts. Getting back home sounded like a nightmare leading to an impossible dream. 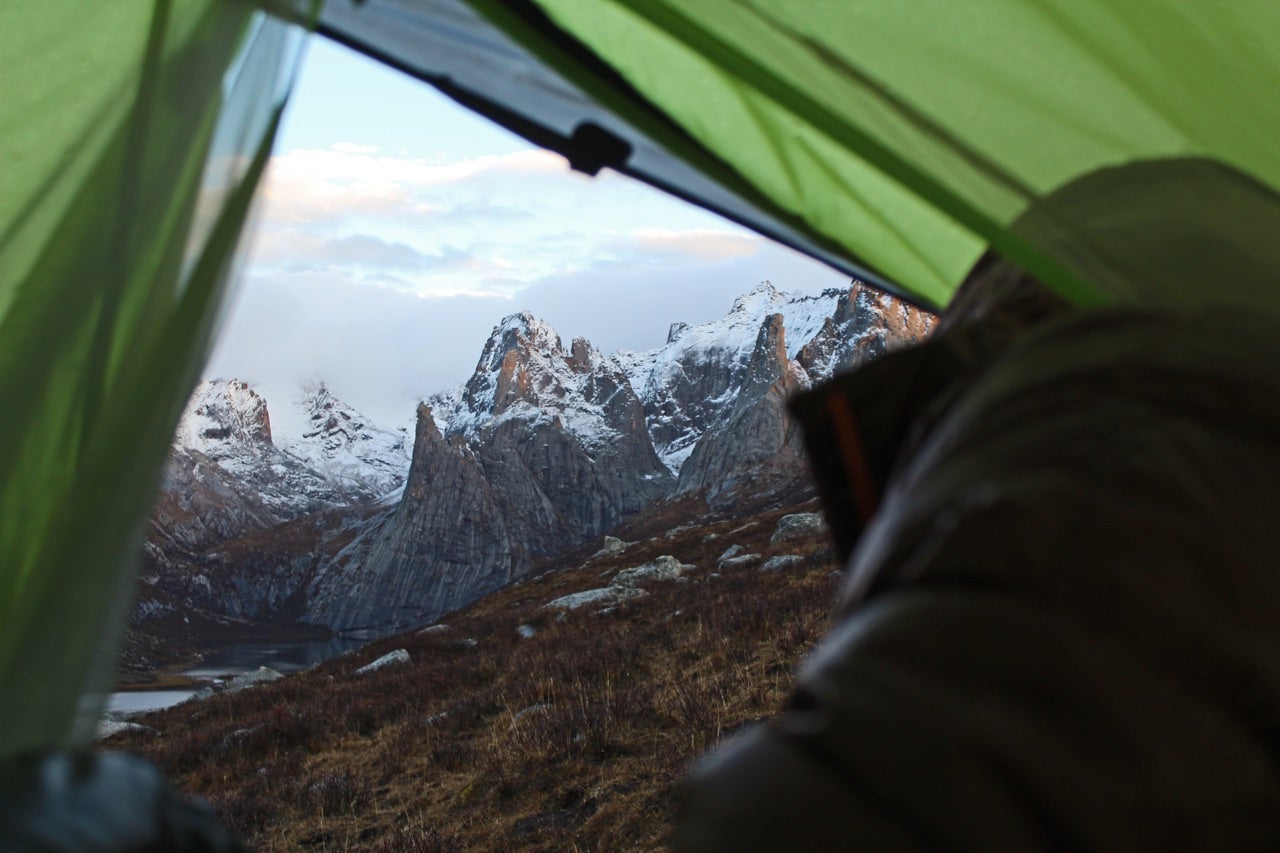 We woke to the sound of raindrops on taught nylon. Hours of precipitation turned into days, and days turned into weeks. On our fifteenth day in the range we awakened by hundred of yaks grazing outside of our tent. A white shelter was now erect not a hundred meters from ours, and soon a Tibetan man and woman were crouched in our vestibule. We were excitedly ushered into their canvas home to eat yak meat and warm by their stove. They spoke only Tibetan, and we only English, and we enjoyed each other’s company as the rain fell endlessly. She treated him with kindness, he treated her with respect. I felt safe.

After nearly two weeks of waiting for a break in the precipitation, our time was up. Being disheartened about the weather was an understatement, but after imagining all the catastrophes that could occur on this expedition, and those that still might come, I was relieved to at least be starting the journey home. Our herding friends insisted that we take their horses back toward the dirt roads. Refusing was useless, and soon we were plodding along trying to maintain balance with 70-pound packs on our backs. After two hours we discovered their father and an old station wagon. He would take us to Jiuzhi. I could have cried. The margin of safety that this created in my head was indescribable. 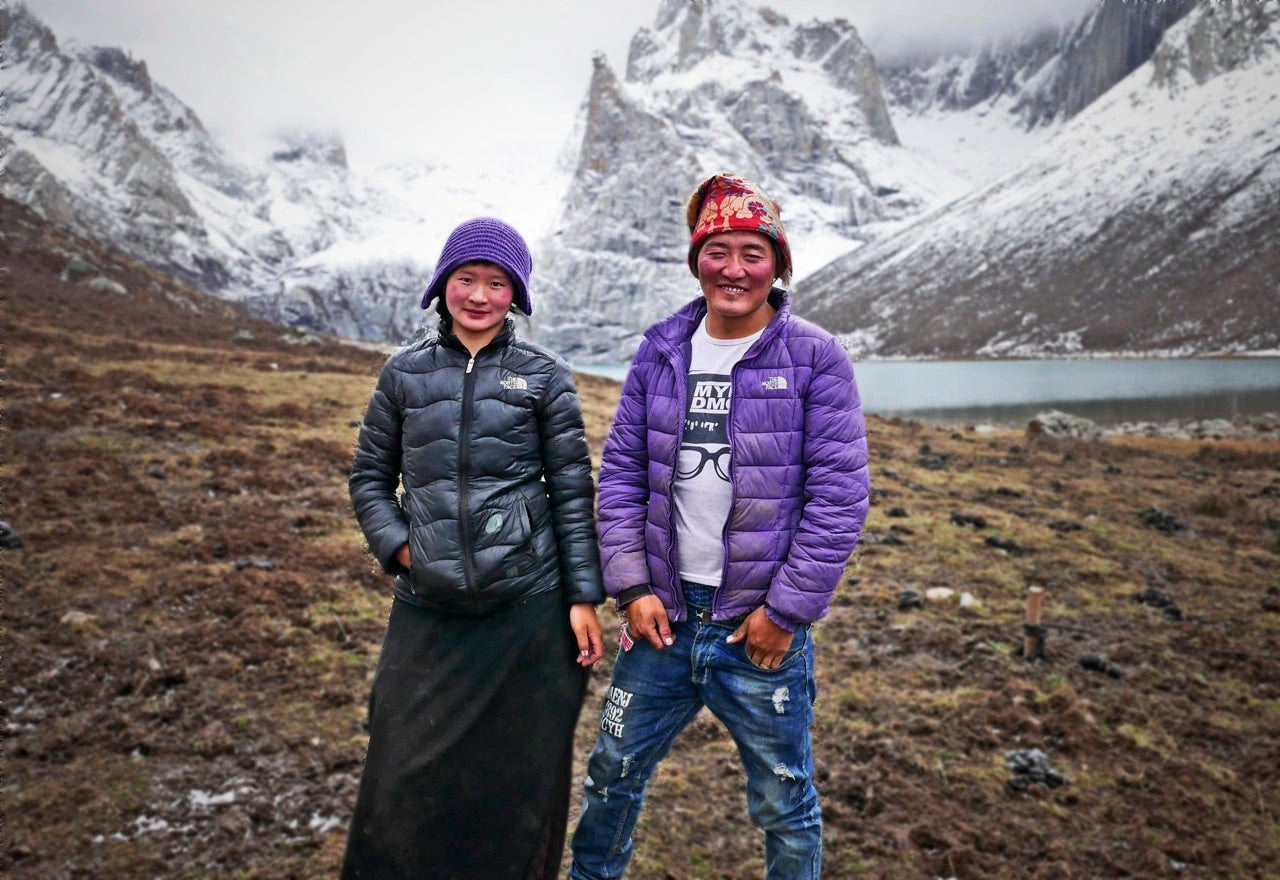 The next day we went in pursuit of a bus station in Jiuzhi, and soon we were surrounded by a group of young men insisting that they were the bus, and that they would take us to Chengdu for the equivalent of thirty bucks. We nervously laughed them off, pushing through their circle to return to the hotel. They followed. They spoke to the receptionist, a man who had proved to be earnest thus far. He took my phone and expressed over Google Translate that one of the men—the one who closely resembled Lil’ Wayne—was to be trusted. I looked at Jessica, she looked back. Our options were limited. We checked in with our guts. We looked at Lil’ Wayne. I pulled my knife out of my pack and put it in my pocket. We got in the mini van.

Four men piled in the small vehicle after us. I fiddled with the knife in my pocket. Every stop, every turn I waited for something bad to happen, but nothing did. All we had gotten ourselves into was an incredibly uncomfortable 14-hour ride. When we finally made it back to Chengdu it was 4 a.m., six hours after our promised arrival—and I was the happiest I had been during the entire expedition.

All of the stress, the anxiety, the fear … was it worth it? We had done what we set out to do. We had made it to the mountains and back safely. We had put up first ascents on tall, remote peaks in China. I had a remarkable adventure with one of my best friends. Yet, as I sit comfortably in my home, I still do not feel content. Perhaps I feel we were too reckless and got lucky, or maybe I’m upset to realize that I’m such an anxious person. I don’t know if I would describe myself as prudent or craven. I’m mad that I subjected myself to the stereotypes of being a woman, and that I felt fear. I am upset that I don’t understand whether that fear was warranted. 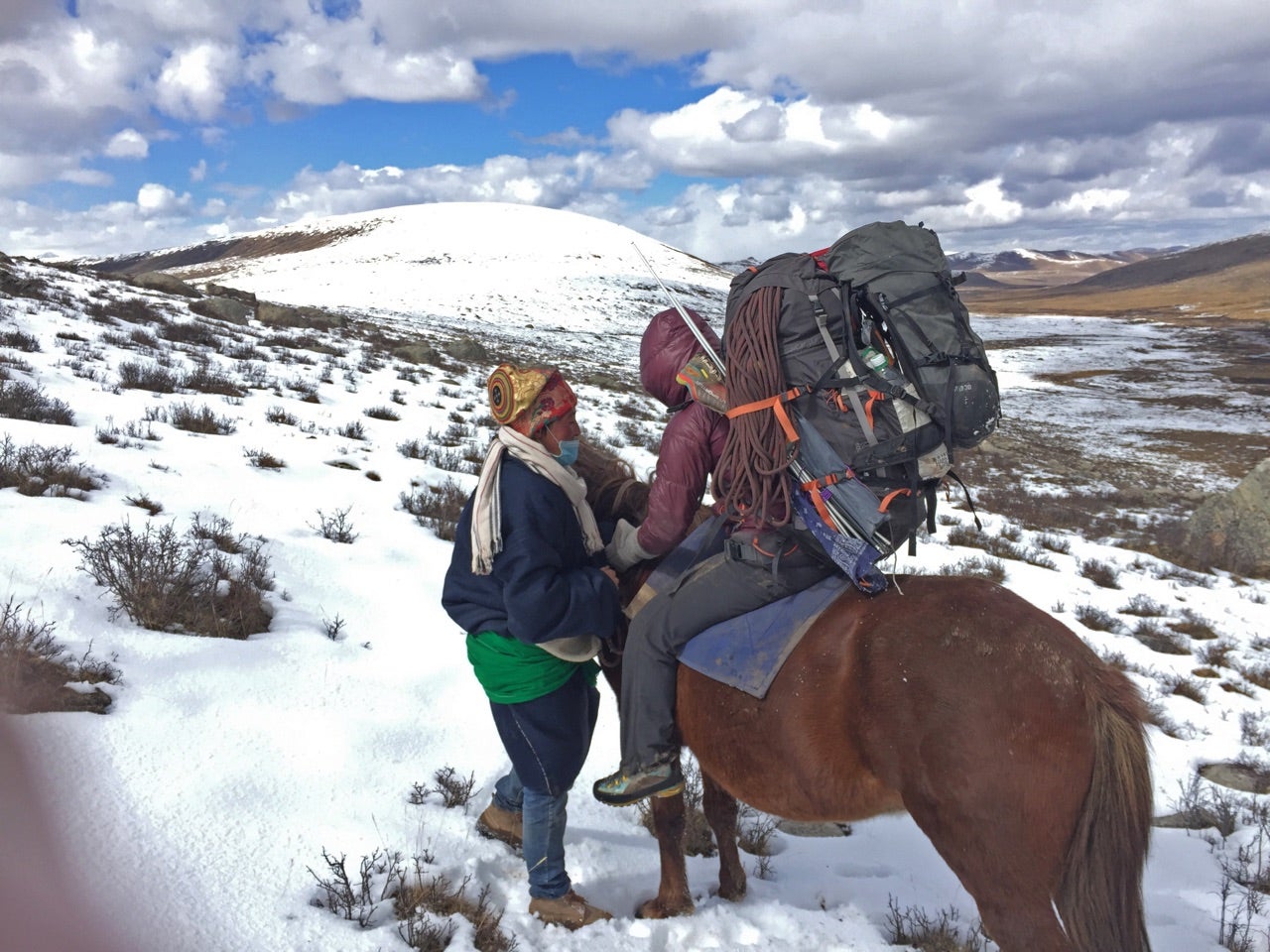 Women of the 21st century are in the unique position of being able to establish themselves in arenas that the men have always held. My experience in the Nyainbo Yuze forced me to accept a fact that I had hoped we as a society were growing out of.  I realized that being of a non-male gender still dictates how we carry ourselves, how we move and act and speak to gain respect and safety. Men and women are different. What one chooses to do with that notion, and the effects that come along with that choice, are entirely personal. The spectrum between safety and fear, progress and stagnation is vast and relentless.

I know I’ll continue exploring remote ranges in all-female teams, not to make a statement or to push limits, but because there is something special about it. I will continue doing what I love to do. Not in not a “man’s world” or a” woman’s world,” but in something that each of us is privy to: our own, individual world.