In The Field With Multitalented Creative Raheim Robinson 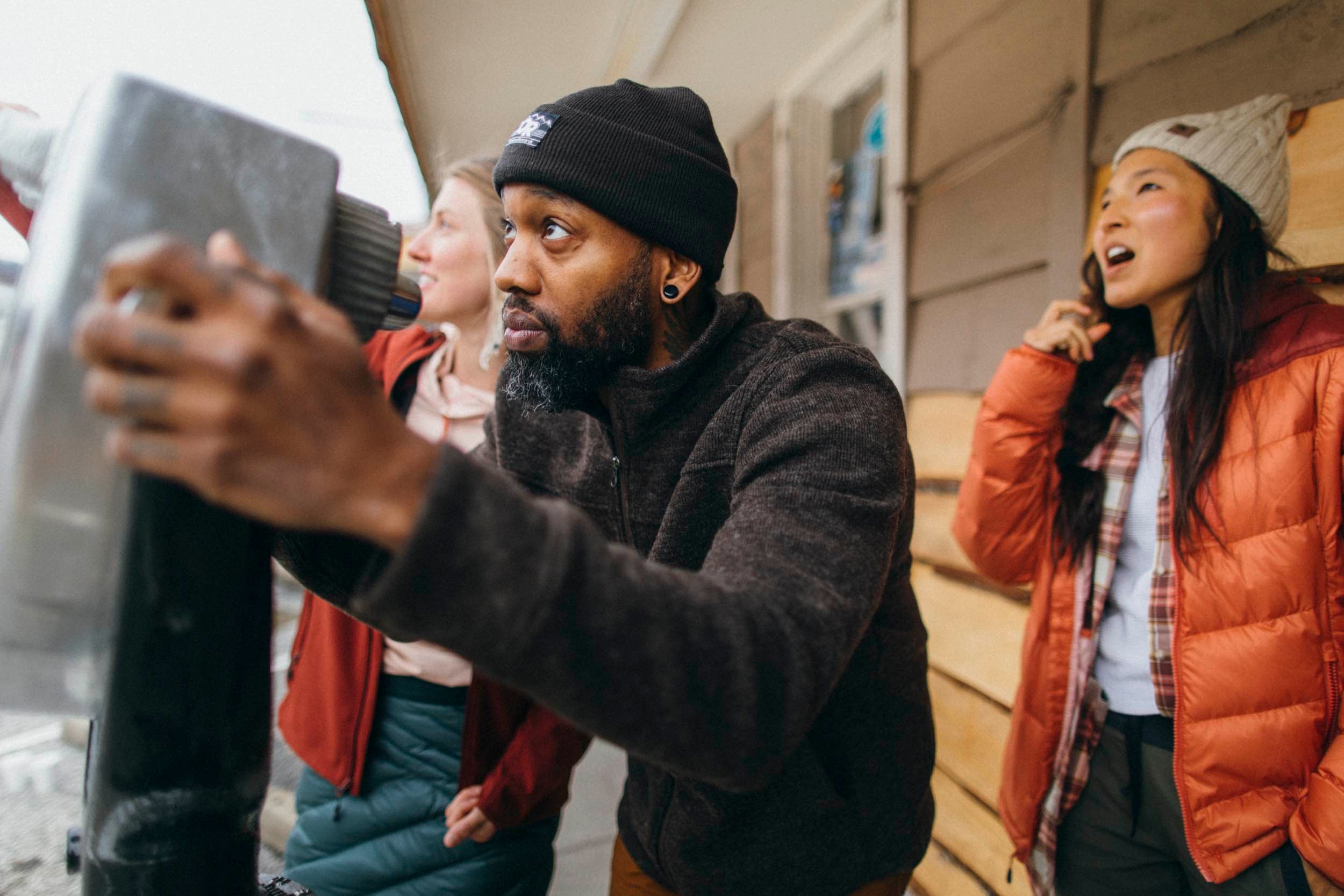 For Raheim, getting into climbing was a happy accident. When his daughter was 9—she’s now 15—she wanted to do an obstacle course at an outdoor festival on Father's Day. “She’s always been super competitive, so she wanted to enter it,” he says. Raheim let her enter—and she won her category, and convinced him to do it, too. And he won his category. The prize? A one-year membership to the local Brooklyn climbing gym.

“This amazing, unexpected chain of events that took place that weekend, in the rain, was kind of the start of a new life for us,” he says. “It was something we were interested in, curious about, and it's been a part of our lives ever since.” 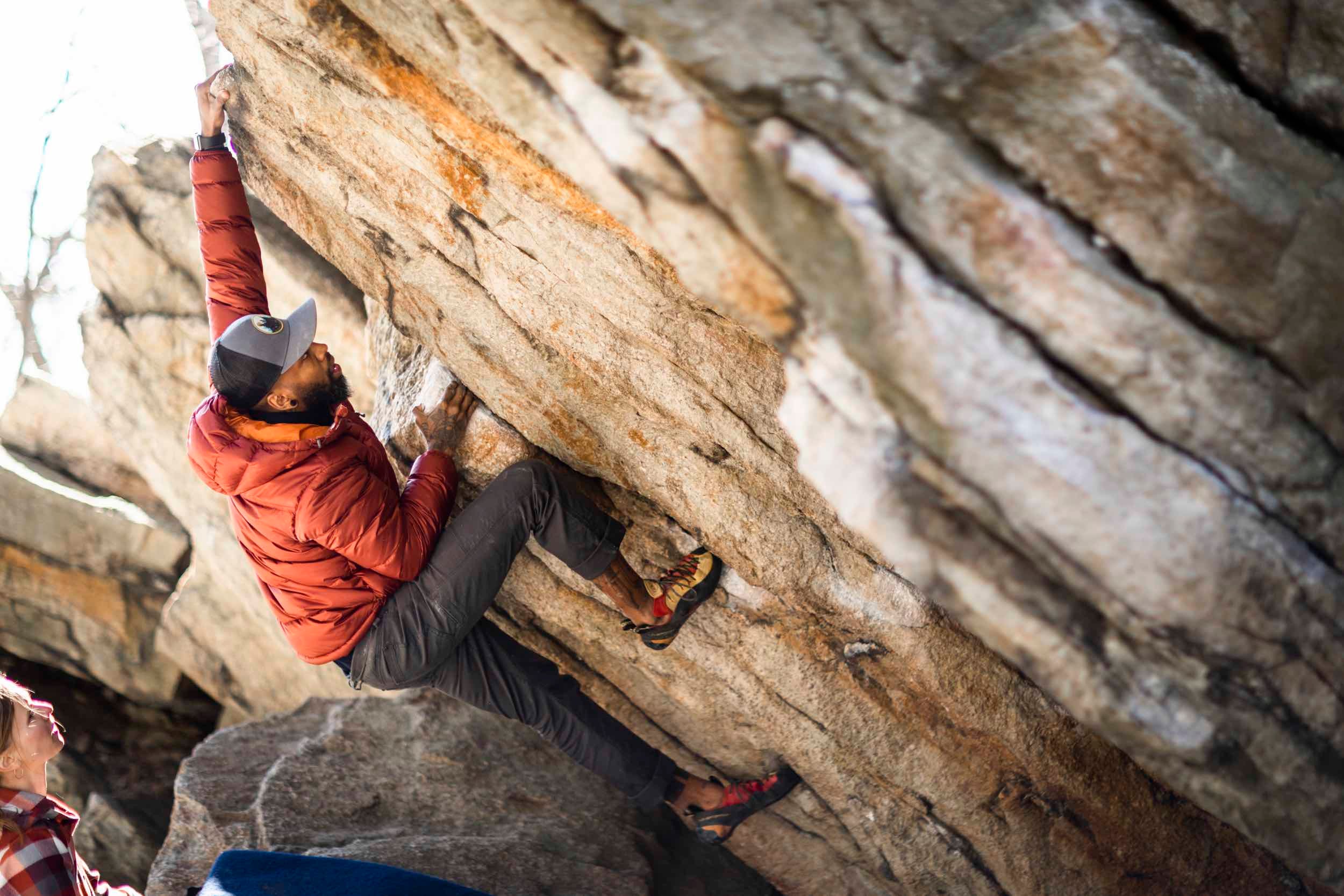 The mental aspect of climbing took him by surprise.

Raheim grew up racing BMX bikes and playing ice hockey and street hockey, and was active as an adult, too. But as he got into climbing, one aspect threw him for a loop at first. “Like a lot of people, especially men, I went into the sport of climbing and thought, I’ve lifted weights, I’ve got a little bit of muscle, I can do this. I see people half my size hanging upside down by their pinkies—I can do that. But you’d be fooled,” he says. For six months straight, he would leave the gym shredded—his elbows shot, barely able to lift his hands, his back in pain.

It was the climbing community that saved him, he says. “They were willing to work with me and show me the ropes when I literally thought I knew what I was doing, and I learned to create a solution to the problem that was on the wall, versus just trying to muscle up it and conquer it.” Over time he learned how to build strategies that would work for him, personally. It forced him into a new headspace. 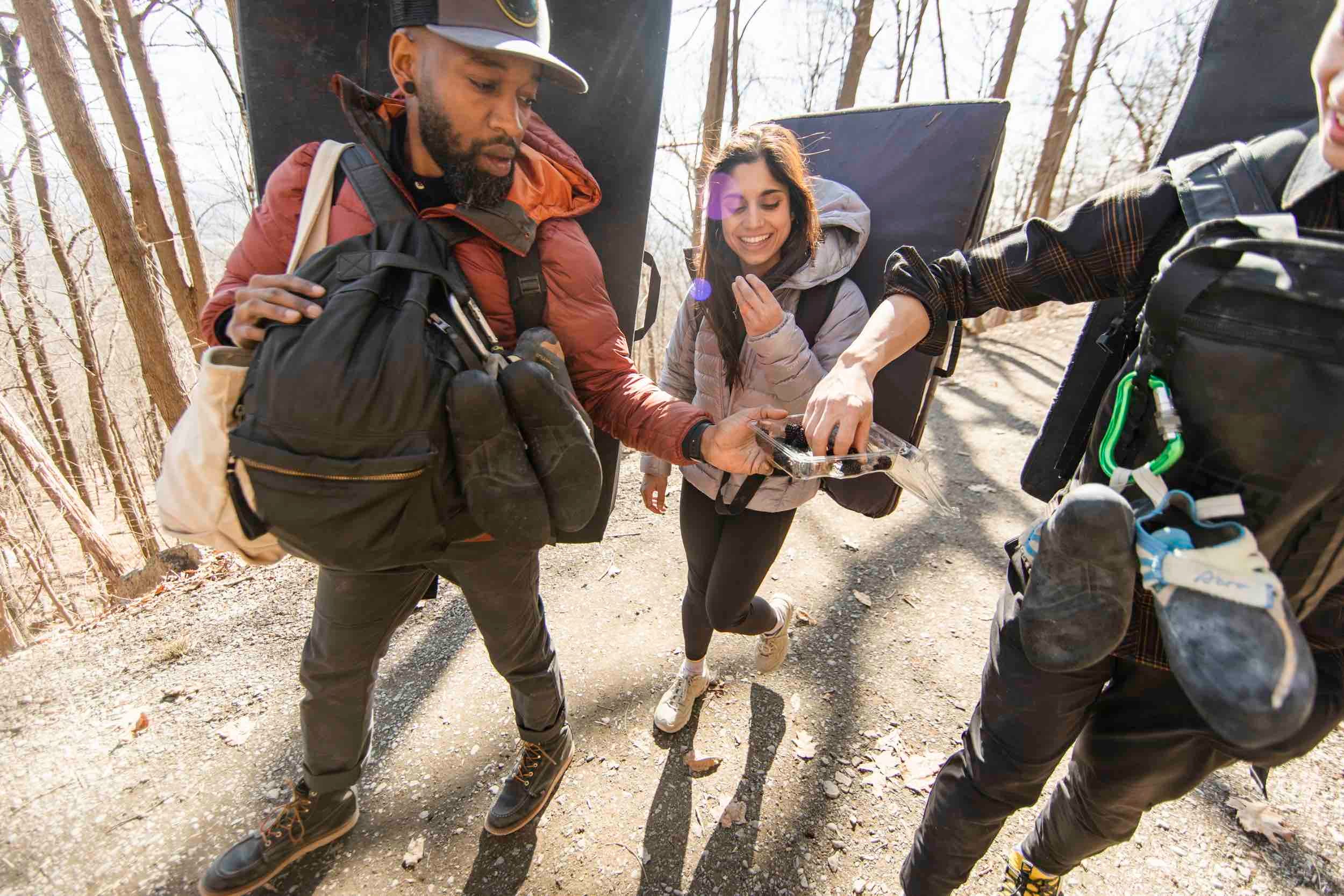 That new mental awareness spread to other areas of his life.

“It showed me how much I wasn’t in tune with my own mental needs and health,” Raheim says. Climbing took him away from what was going on in his everyday life in a good way—the stresses of work, personal life, freelance life, worries about the future. He progressed through the grades, bouldering harder and harder, but didn’t realize how much it was benefitting his mental state until he stopped climbing for a minute. “I realized without climbing, I become stressed, without climbing there’s depression, without climbing there’s doubt,” he says.

Climbing has helped him learn how to be more present—something that’s increasingly difficult to do with the constant distractions of modern life, both on and offline. That sense of presence, especially in nature, is something he’s motivated to do with others.

“Nature, for us growing up in Harlem, was Central Park—and I don’t mean the whole park from 59th all the way to 110th. I mean from 103rd Street to 110th.” The neighborhood was like a bubble that few left except for work, he says, and if you owned a sleeping bag, it was for having sleepovers on the floor at your buddy’s house. It wasn’t until he was an adult, taking his daughter camping with friends for a Father’s Day weekend, that his curiosity about nature began to be fulfilled. When climbing came into the picture, he knew he needed to share what he’d discovered with others. 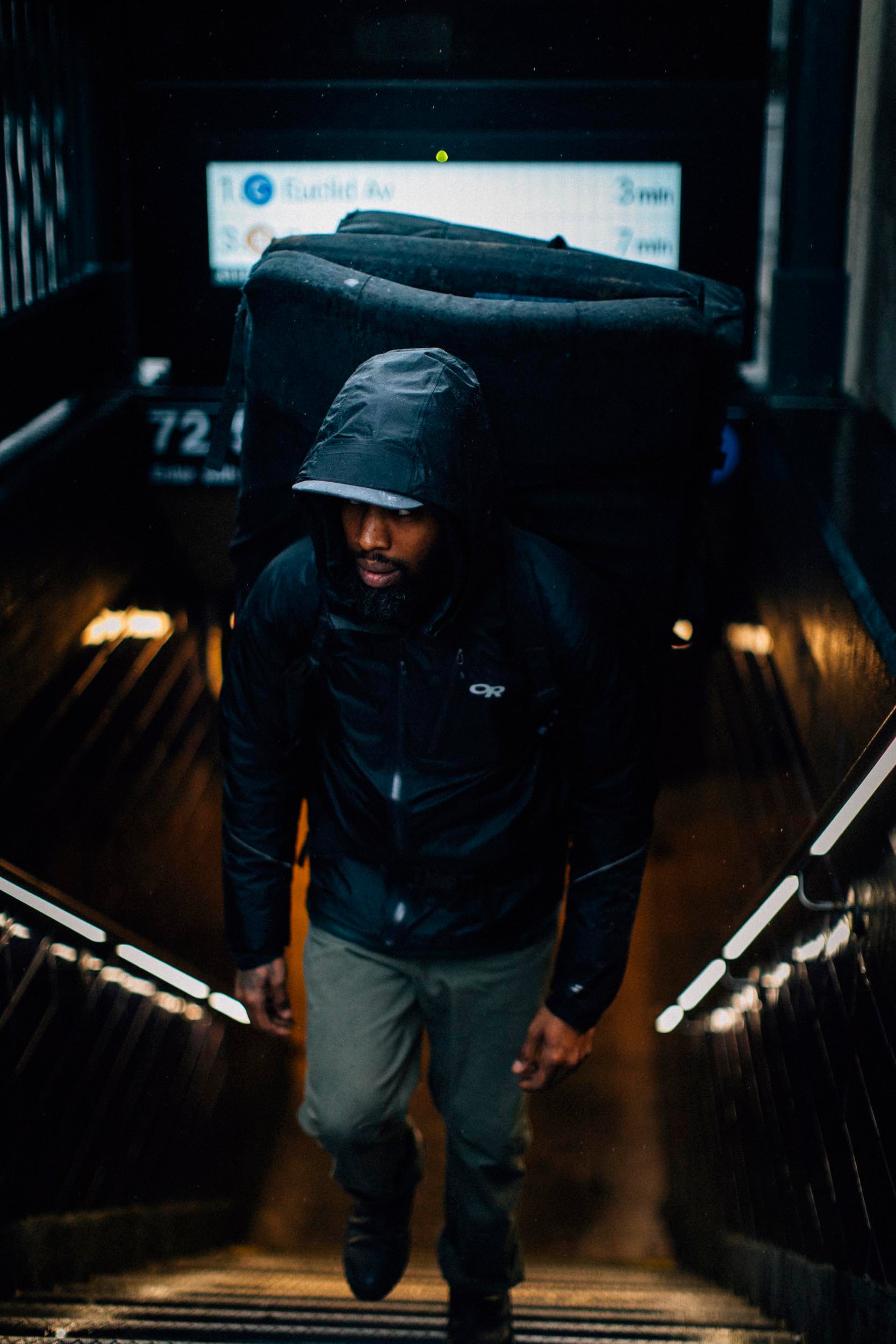 Now Raheim aims to help others access the nature he loves.

The more time he spent outdoors, climbing or hiking and camping with his daughter, the more Raheim realized how much nature he had missed out on as a child. While his grandpa had relentlessly supported his BMX racing and other sports, outdoor trips simply had not been a part of their lives.

Raheim has been working with the Brooklyn district attorney’s office and the Access Fund to organize a program for troubled teens that will give them the chance to experience nature in ways he never did growing up. The program, called Disconnecting from Social Media and Reconnecting to Nature, is aimed at helping kids to get outside—even if they decide it’s not for them. “I just want to expose them to that,” Raheim says, so they can see what’s out there and decide for themselves how they feel about it. “Because you don’t know what you don’t know.” 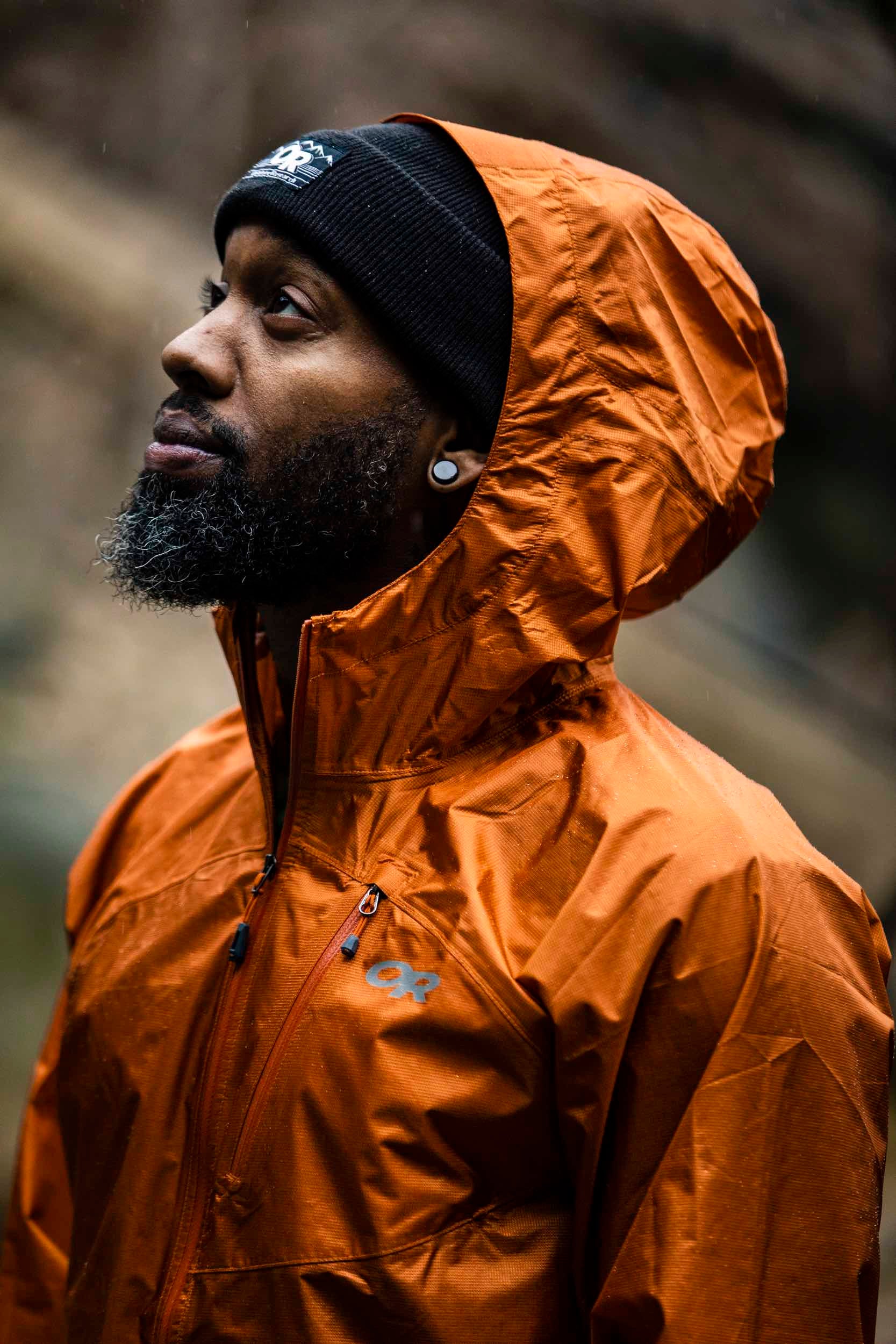 One of his latest creative collaborations furthers that notion of what’s available—especially to people of color who live in cities.

When Raheim and filmmakers Josh Greenwood and Benjamin Garst began working on a project together, their initial aim was simply to make a pitch video of sorts. They wanted to show mainstream brands that they could work with more black and brown people, both in front of the camera and behind. They created what they thought would be a private proof-of-concept video—but as they finished it, Benjamin Garst realized it felt more like a short film. They submitted it to the Banff Mountain Film Festival, where it was a finalist, and it also screened at the Vancouver International Mountain Film Festival.

Starring a person of color as a confident climber in nature—narrated by a historical recording of Langston Hughes—“Climb Your Dreams” was unlike anything most audiences had seen before. But there was another level, too. In the film, Raheim is purposefully dressed like an inner city creative as he rides the subway, daydreaming about climbing. “We wanted to shine light on the fact that we don’t all live in vans, and live next to the crags,” he says. “But we still do the same thing.”