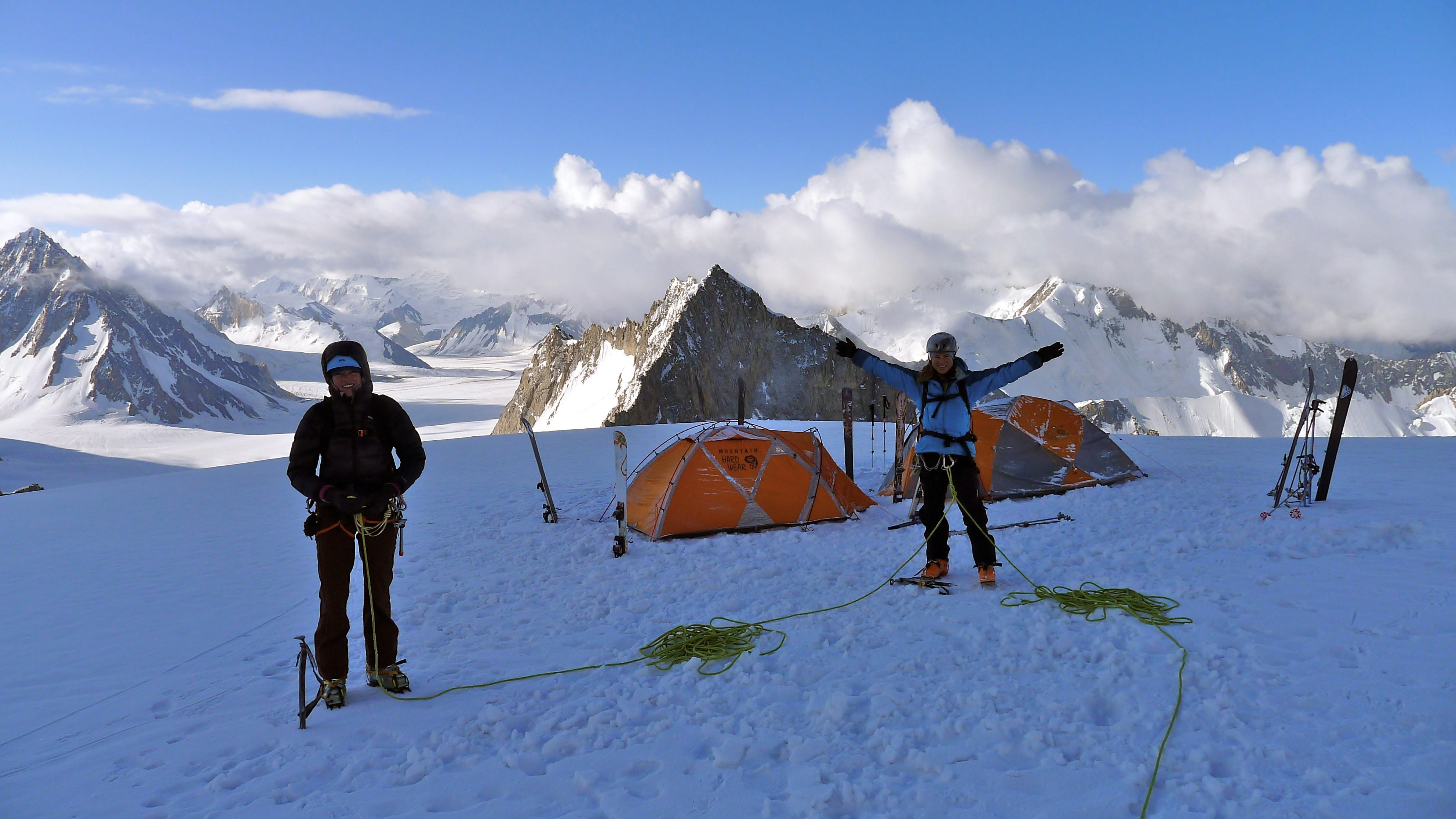 Two unsuccessful attempts on Peak 6135 have left Janet, Kirsten, and I dejected. Knowing that high quality alpine rock may be out of the question, we have decided to check out the climbing potential near Saser Kangri II, the world's second highest unclimbed peak. Our men's team -- Freddie, Mark, and Steve -- have been describing this area as the "Baby Ruth" for its similarity to Alaska's Ruth Gorge. So, trading dry glacier for ski mode, we make our way from base camp, up and over a high col, and down onto the expanse of the South Shukpa glacier where we find ourselves surrounded by stunning unclimbed peaks in every direction. With a new advanced base camp in place, this one at 18,000ft, we take to exploring potential climbs. But with only ten days left before we leave the mountains, choosing a new objective and timing it with a good weather window, is starting to seem improbable...

August 5 A fall now means certain death. Self-arrest on 55-degree water ice seems unlikely and so does surviving the 1000-foot slide down this giant face. I try not to think about such a fate but it's hard not to while climbing un-roped, dizzy from exertion and altitude, and the lightweight mountaineering ax I'm using just keeps bouncing off the ice.

We (just Kirsten and I; Janet remains behind after spending the night with a barely-out-of-the-tent, projectile vomiting stomach bug) have completely misread this mountain. From our advanced base camp this peak appeared to be a straightforward, if not lackluster, snow slog followed by what we hoped would be a 40-degree, corn snow, ski descent. We estimated an eight-hour day and got a leisurely 7am start. An hour into the climb it becomes obvious that we won't be skiing back down; too steep, too icy. We ditch the skis.

Our next oversight is in the gear we carry...or lack thereof. Planning for skiing, while also planning to be 'light and fast', results in a tiny rack: one ice screw, one 60m half rope, two useless pickets, eight stoppers, and a handful of carabiners and cord. Determined to make it to the top of something, anything, we push on, silently acknowledging that it is both faster and safer to climb alone. I carry our one ice screw and Kirsten carries the rope; neither of us will get out of here without the other, we are fully committed.

Now, six hours into the day our calves burn from endless front pointing and the summit appears no closer than it did two hours ago. The scale here is enormous and I should have known this wouldn't come easily. Throughout the day we have been traversing below a ridge of broken rock, rounding the toe of a buttress every so often, and I keep expecting to find a ledge to rest on or a decrease in slope angle but nothing gives way.

Four more hours go by. We run out of water and scorch under hot sun and windless skies until at last the summit pitches are within reach. Roping up for the final traversing section of easy but treacherous mixed climbing, we make the final 'au cheval' (French for 'ride the horse') moves onto the sharp, 21,000ft summit at 6:30pm. We snap a few photos and know that the time has come to confront a long, slow descent. In keeping with the theme of the day, I estimate an arrival in base camp at 2:30am.

As the sun sets over an endless landscape of jagged peaks, the temperature plummets and I'm forced into every insulating layer I carry. Donning my headlamp, I re-lead the traverse pitches and get us back below the rock ridge where we begin a series of sharply angling rappels that should deposit us below a recognizable buttress. From there we should be able to head straight down the big face, picking up our skis along the way and arrive in camp at a fashionably late hour. Though we've agreed to be safe and conservative on descent, the anchors are often questionable and we try desperately to keep more weight on our feet than the rope. A single tiny stopper in a gritty flare or a sling around a precariously balanced block is all we really have to work with. Losing track of rappels after eleven I continue leading the descents, increasingly shivery and exhausted, until we run out of stoppers and are forced back onto the icy face. The night is ink black and a sliver of moon offers no reflection on where we are; if we drop down too soon we risk ending up on an overhanging serac...this is not an option.

By now, we've been moving for nineteen hours and mental exhaustion has set in. Simultaneously, Kirsten's headlamp starts to fade and I fail repeatedly at lining up the holes on a V-thread anchor. Our one ice screw keeps clogging and no amount of whacking it on my ax head will clean the plug. A hundred feet above me Kirsten calls down, advising me not to hit the threads or drop the screw. "I know!" I bark back, wondering if she thinks this is my first time ice climbing. "I can't do this anymore, you take over." We trade headlamps and I revert to a comfortably compliant role, even nodding off at one point, awoken minutes later by the Cheyne-Stokes breathing I've battled the entire trip.

During the next ten hours, Kirsten makes upwards of fifteen V-threads, lining up the threads on the first try every single time, and nearly getting us back to the glacier before we run out of all our anchor material. Luckily, we cross paths with Janet and Freddie who are on their way up the same ice slope to climb the distinct rock spire just above us. They've brought us hot tea and we beg a cordelette off of them, too. Making the final rappels back to the glacier and the short ski to camp, we arrive depleted and elated at once, relieved to have climbed to the top of something...and to have made it back down.

August 8 Two days later, with a stellar weather window in place, our whole team (minus Steve who's been fighting an upper respiratory infection) reaches the summit of another peak. This one sits high above camp at the head of the glacier. We've been calling it Stegosaurus for the spiky rock spires that arch along the reptilian back of this prominent mountain. The climbing is pleasantly straightforward and after several hours ascending steep snow, a long and delicate corniced ridge leads us to a rocky platform below the summit. We take turns belaying each other up the fragile, overhanging cornice to the summit proper at 22,000ft, the highest altitude Janet, Kirsten, and I have ever experienced.

After an equally straightforward descent (neither headlamps nor warm clothing required), we pack up our high bivy camp, strap on skis, and are rewarded with the best skiing of the trip all the way back to our advanced camp. When we arrive in the late afternoon, two of our Indian Sherpas greet us with cups of warm, sugary Tang. They have been watching us climb and ski all day and are politely curious about skis and how they work. So we set them up with our equipment and give them a quick lesson but all they really want to do is go fast. With no background as skiers, their natural athleticism is immediately evident and I'm once again left in reverence of their understated talent, knowing this trip would not be the same without their support. It is in these last hours of our Karakoram journey that I am reminded how fortunate I am to be in such an amazing place, surrounded by a lifetime of climbing, and in the company of some of the best people and climbing partners one could ever hope for.

Post Expedition For me, this was the trip of a lifetime. An expensive and timely venture that I may not be undertaking again anytime soon, even though lots of people ask me when I'm going back. And while I've already forgotten (or repressed) how often I felt miserable trying to climb (or sleep or eat) at altitude, that bit of suffering mixed with equal parts adventure, and success have only served to make me want more. The small, rugged mountains of my home in the Northeast proved to be a great training ground for the biggest mountains in the world, but some part of me will never again find complete satisfaction in cragging, no matter the difficulty. It has become a means to an end as I find myself daydreaming about big, remote mountains in faraway places. And so now I'm left with the hardest decision of all: where to go next?

None of this trip would have been possible without the generous support of a Polartec Challenge Grant and additional help from Outdoor Research, Mountain Hardwear, Sterling Rope Company, and Petzl. And of course the most unsung heroes of all were our amazing Sherpas and staff from Rimo Expeditions.