The Broken Beauty Of Lake Powell 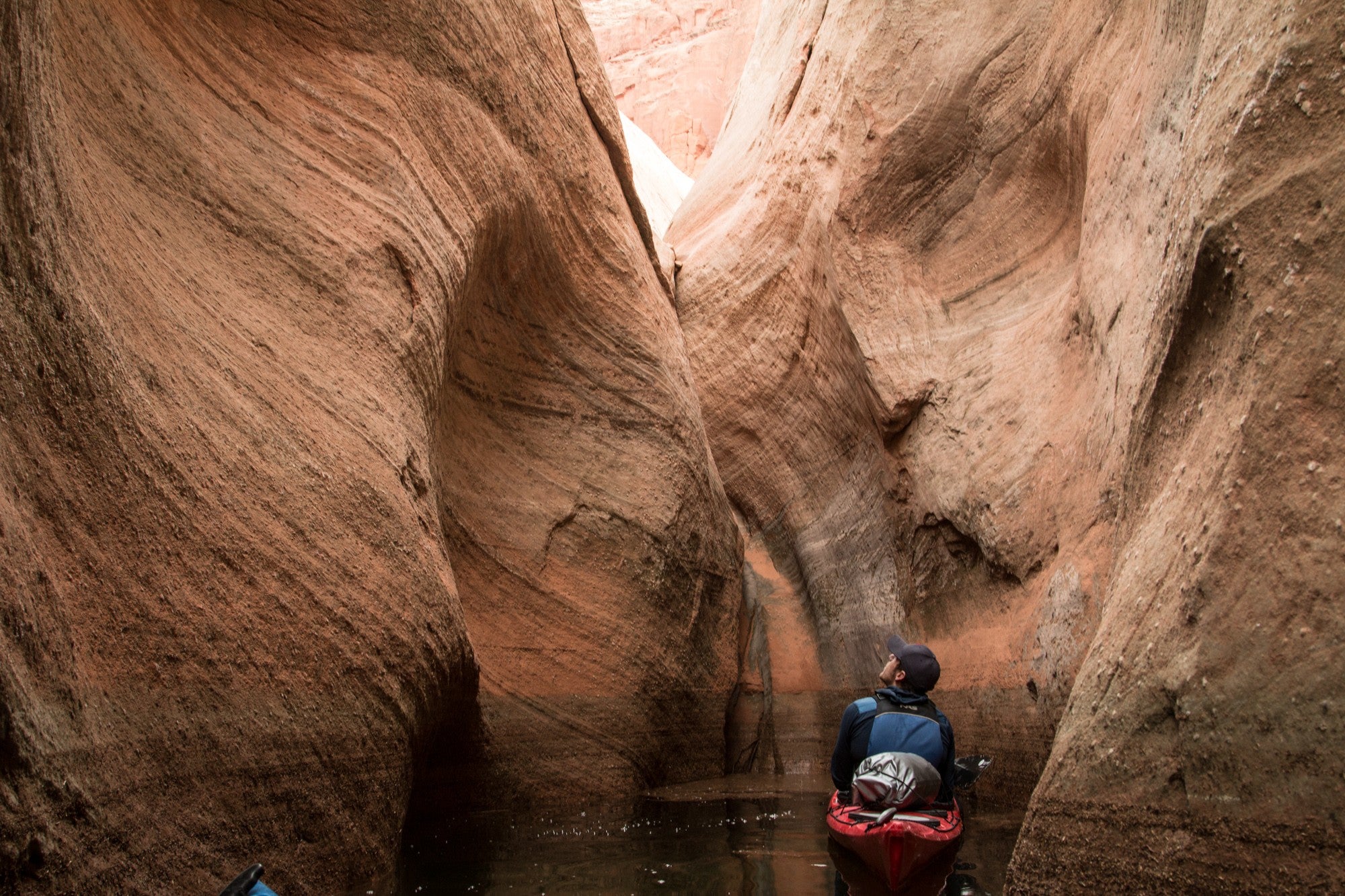 Earlier in December, I jumped at the invitation to join an eight-day paddling trip crossing most of the length of Lake Powell. Brendan Leonard was researching a story for Canoe & Kayak Magazine with Sinjin Eberle, intermountain west communications director for the nonprofit conservation organization American Rivers. Forest Woodward was shooting photos for the magazine story, and pro skier and adventurer Kalen Thorien and I joined. All of us were curious what formations we might be able to see with the low water levels, and to get a grasp of this strange place that would never natrually occur. Here's the story of our trip, in photos. 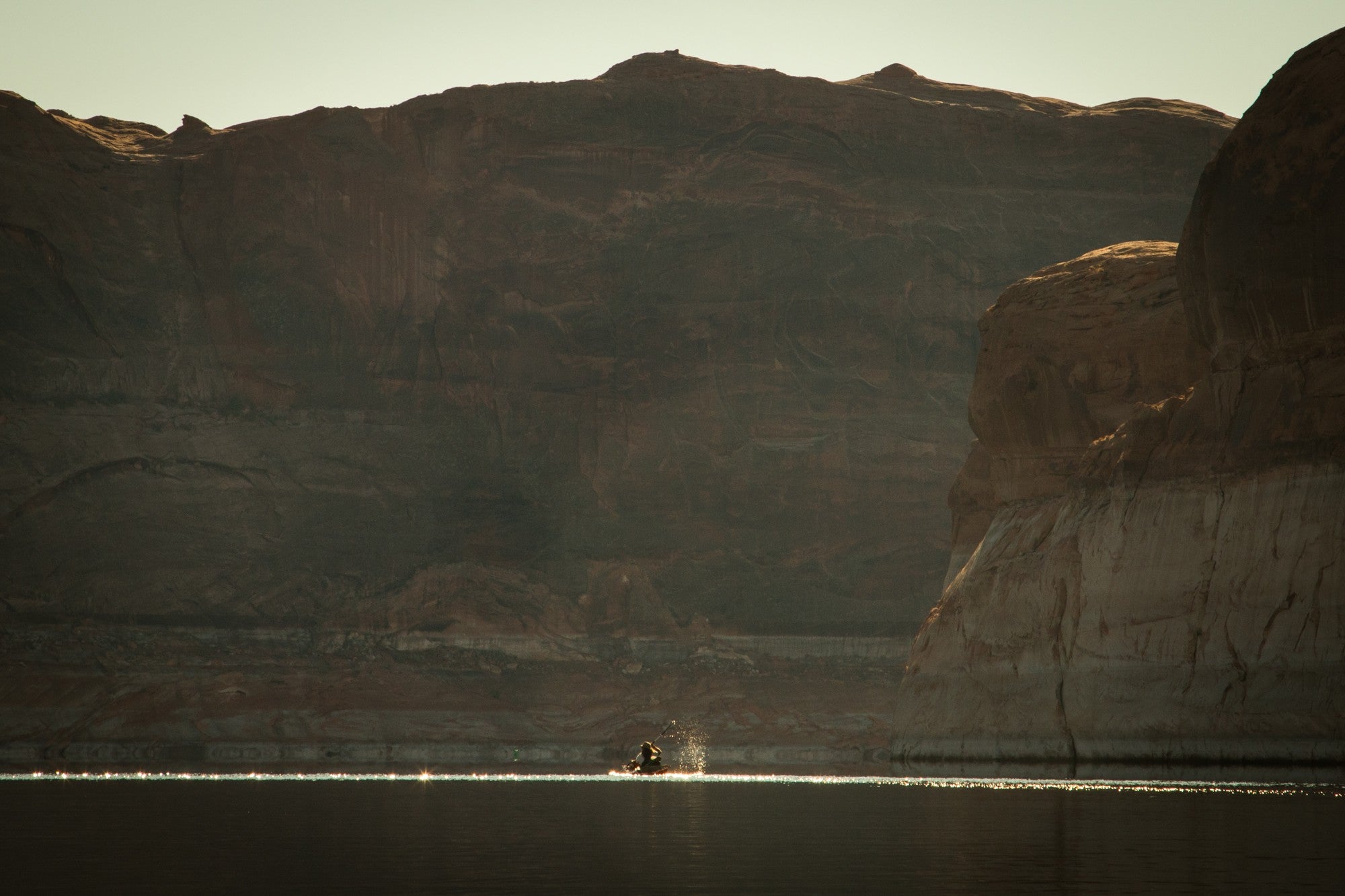 Even with hundreds of feet of water hiding the lower levels of the walls, Glen Canyon still stunned me with its views, both large and small. 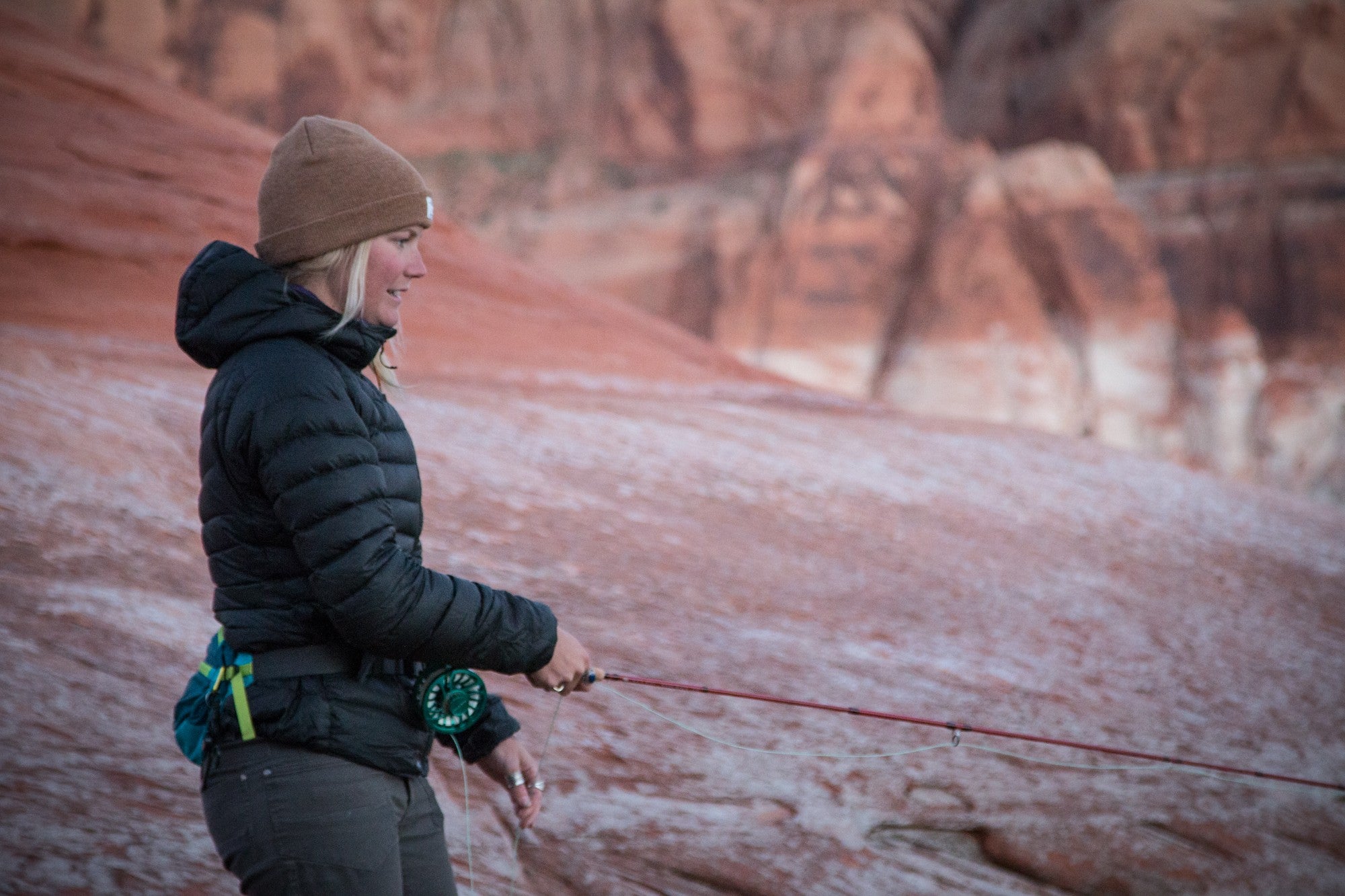 At our first camp, we pulled the boats to shore as the sun quickly sunk low. Kalen unpacked with speed to get some time on the bank with her fly rod, trying to tempt a fish into becoming her dinner. Several casts in, she realized Lake Powell isn’t like most other bodies of water she’d been fishing lately. More like lake fishing in Oklahoma, suggested Sinjin. Instead of the trout that live in the moving waters of the rivers upstream—like in the Escalante—it was carp and bass that were surfacing at dusk throughout the trip. The carp and bass can handle the warmer water of the reservoir and can survive in higher concentrations of pollutants. 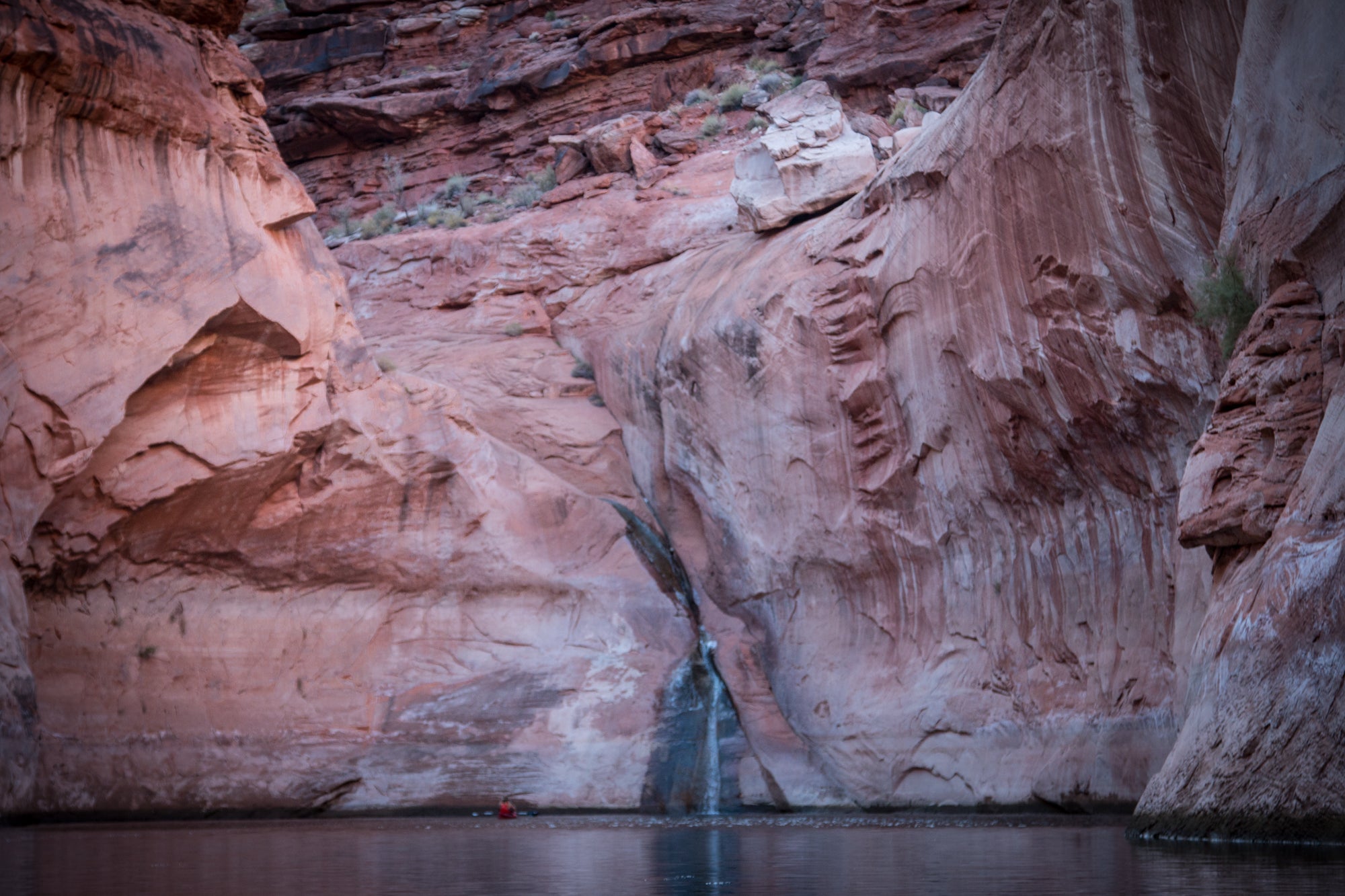 Kalen explores a waterfall we found while exploring Bowns Canyon. We followed the sound of rushing water to find a cascade rushing through dripping icicles, and imagined what it would be like if it crashed all the way to the canyon floor instead of spilling into the lake. 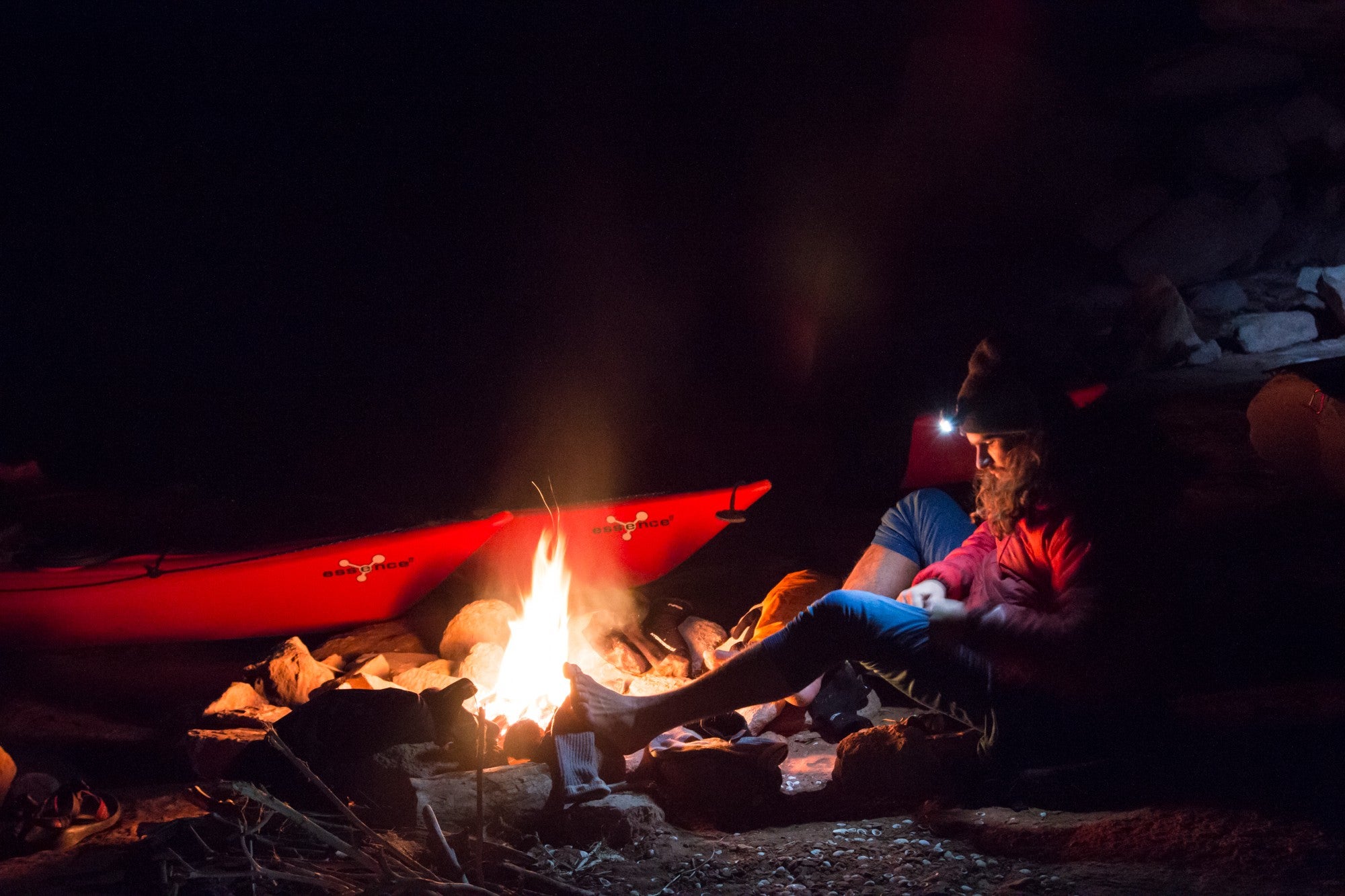 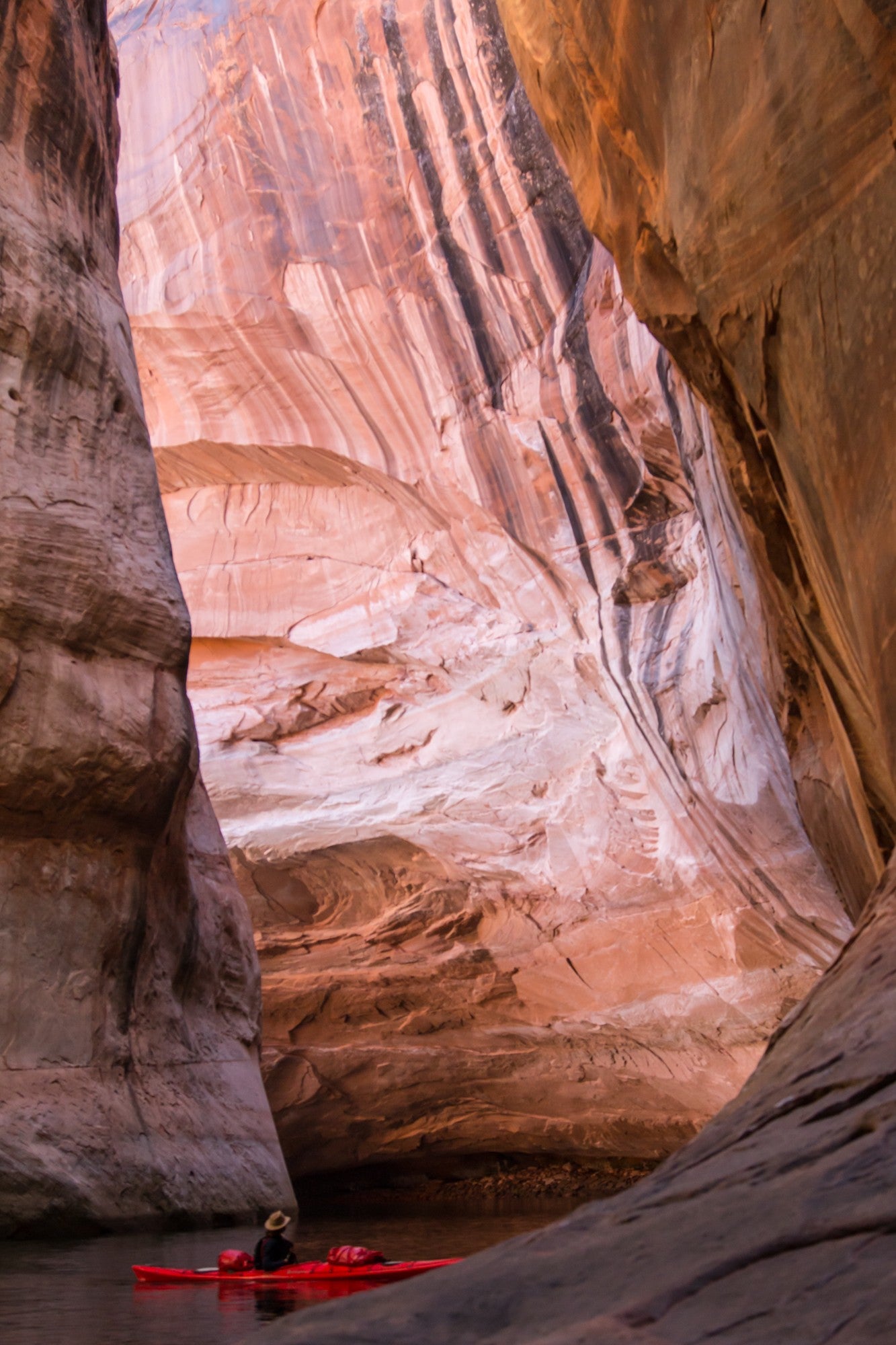 The Cathedral In The Desert, one of Glen Canyon’s most famous landmarks, has partly emerged with recent lower water levels. During our trip, the lake was about half full. We paddled alongside the white “bathtub ring” where calcium carbonate and other hard minerals in the water had attached to the red Navajo sandstone when the water levels were higher. Even as water levels lower, the lake’s mark has been left behind in many ways. 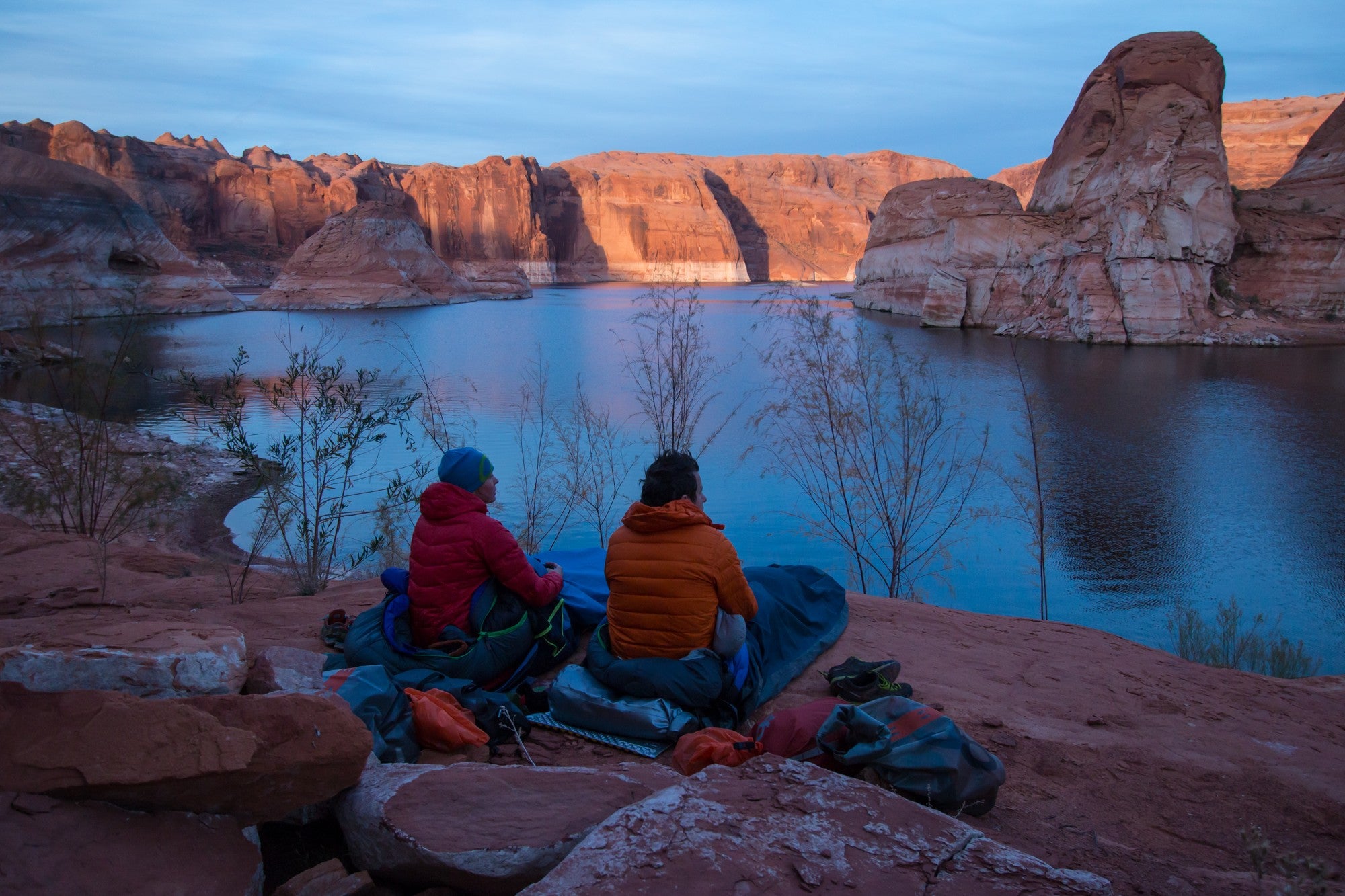 We’d been paddling for three days, and had barely seen a single motor boat each day. It felt remote. But when we pulled our kayaks on shore in this cove we found about a half dozen different fire rings, beer cups filled with sand and nearly all the vegetation near the shore stripped of any branches big enough to be burned. It felt strange to imagine motor boats moored in the cove, and even more strange to picture people standing around drinking out of Solo cups, after we’d hauled our dehydrated food in and were hauling our wag bags out. Did I have any more of a right to enjoy that place than those who’d left their Solo cups? Did they appreciate it fully? Could they truly appreciate someplace like this if they’d simply motored up to it? Was I truly appreciating it? That night I fell asleep peeking out at the stars from my bivy sack and wondering who truly did have a right to enjoy or experience a place like this—and what that even meant. 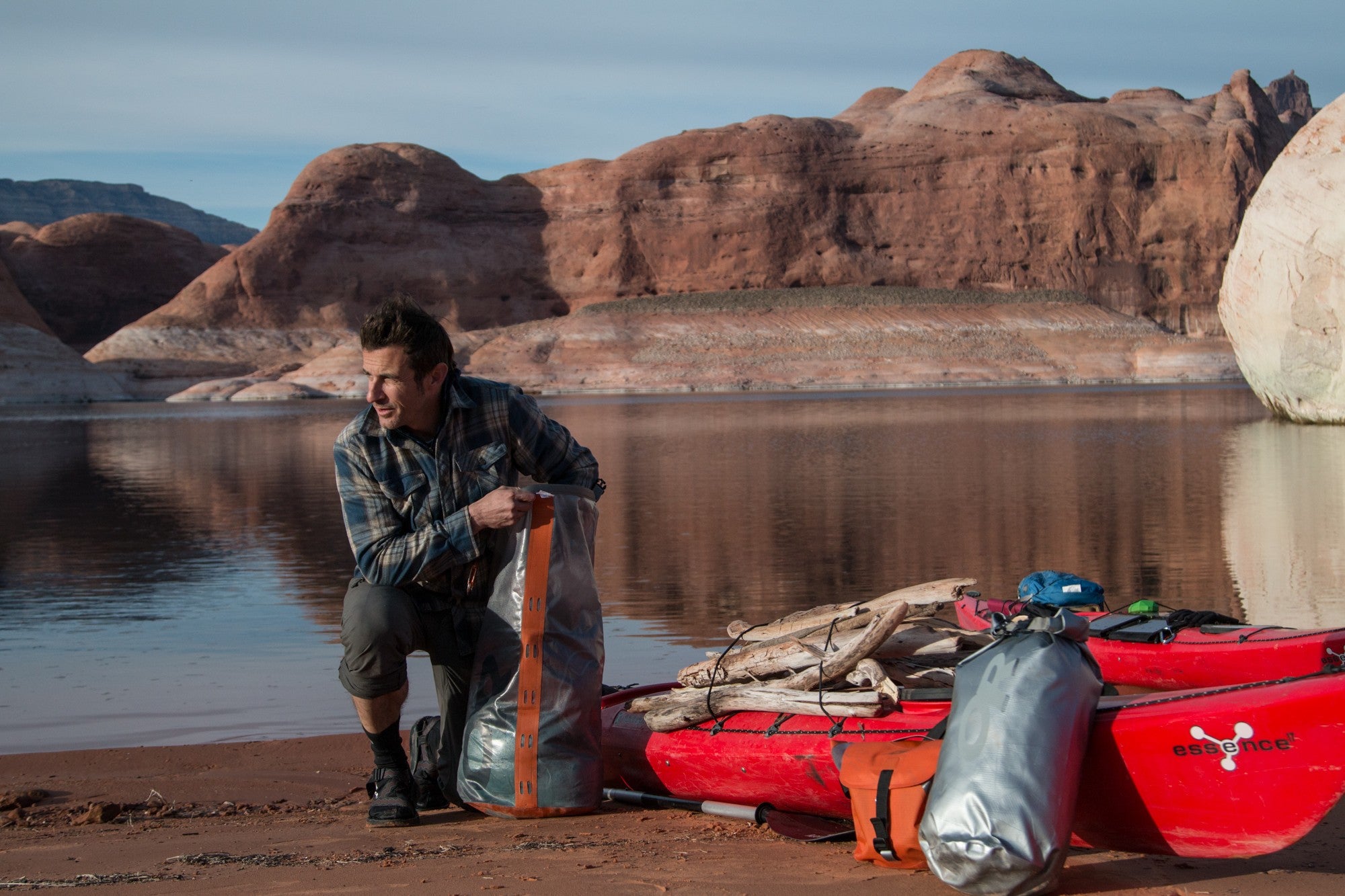 We rented 17-foot touring kayaks and packed fairly lightly—packing little more than if we’d been backpacking. I often wondered what a different experience people have on Lake Powell on motorized boats.

On the wall in my bedroom hangs a black and white print of the folk singer and activist Katie Lee. Half lounging, half stemming across a rounded crevice in the sandstone of Glen Canyon, she poses without any clothes on. I can imagine how the part-rough, part-velvety sandstone felt against her back, and I wonder what it was like to explore the canyon when it was still largely untouched, before it was filled in with hundreds of feet of water. We paddled up a couple of side canyons, in search of some of the spots we’d seen in photos taken before the dam. Wondering if with the lower water levels we might get a little glimpse of what was there before, the places that that captured Katie Lee’s affections. The slot canyons were still thrilling, curving lifelike above our heads, but most of the places Tad Nichols famously captured in the ‘50s were still under a bed of sediment and pools of stagnant water. 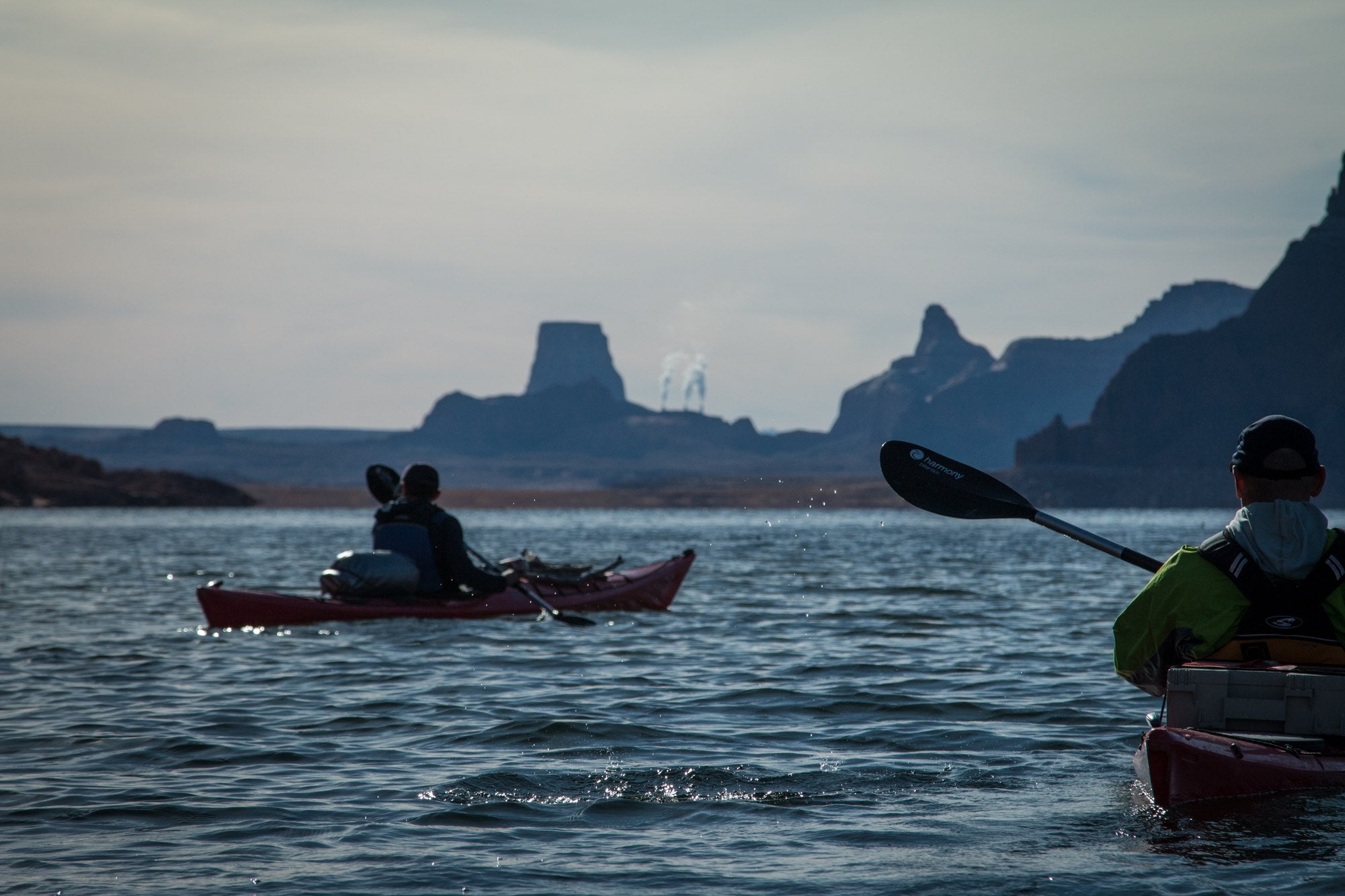 As we rounded the bend on day five—shortly after exploring Grotto Canyon, famous in Katie Lee’s photos—we chuckled at the sight that signaled our gradual descent back into civilization: the three chugging stacks of the Navajo Generating Station in Page, Ariz. The third largest emitter of carbon dioxide in the U.S., the coal-powered energy station provides power to Arizona, California and Nevada, including the energy to pump Colorado River water for the Central Arizona Project, a 336-mile diversion canal providing water to south and central Arizona. The site for the generating station—and the dam—was selected after attempts to dam the Colorado further down in the Grand Canyon were rejected. The more I’ve read and learned about water use and rivers in the Southwest is that everything comes at a compromise. 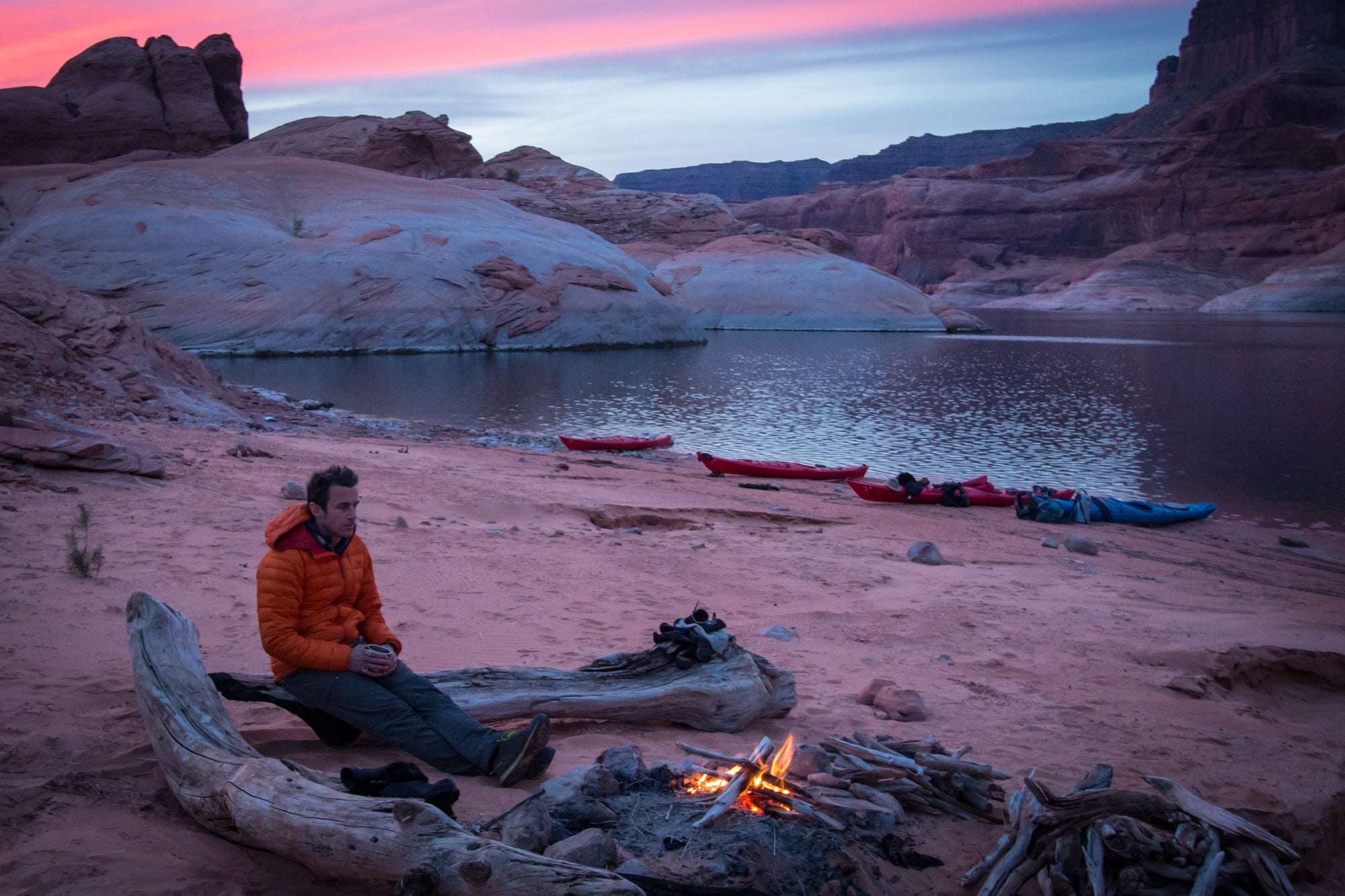 There are probably a number of reasons we didn’t see anyone else paddling the entire week we were on the lake. The second week of December, the sun set around 5:20 p.m. and didn’t rise until nearly 7:30 a.m., leaving a long, cold night to retreat into thought. We’d usually quickly unload our kayaks, racing to set up camp before dark, and then preparing dehydrated meals on our camp stoves around a driftwood fire. With limited firewood and temperatures dipping into the 20s at night, we each wandered back to our respective sleeping bags or tents earlier and earlier each night, sometimes barely after 8 p.m. In the quiet, I often found myself thinking about my grandmothers and what the landscape was like when they were my age. My heart ached to think of how many wild places had been lost to development, and I spent much of the daytime  paddling hours examining my own lifestyle and questioning what I could do to live more simply, to make less impact on the environment, and to help preserve the places I love for the next generation.