Learning To Become A Bleausard 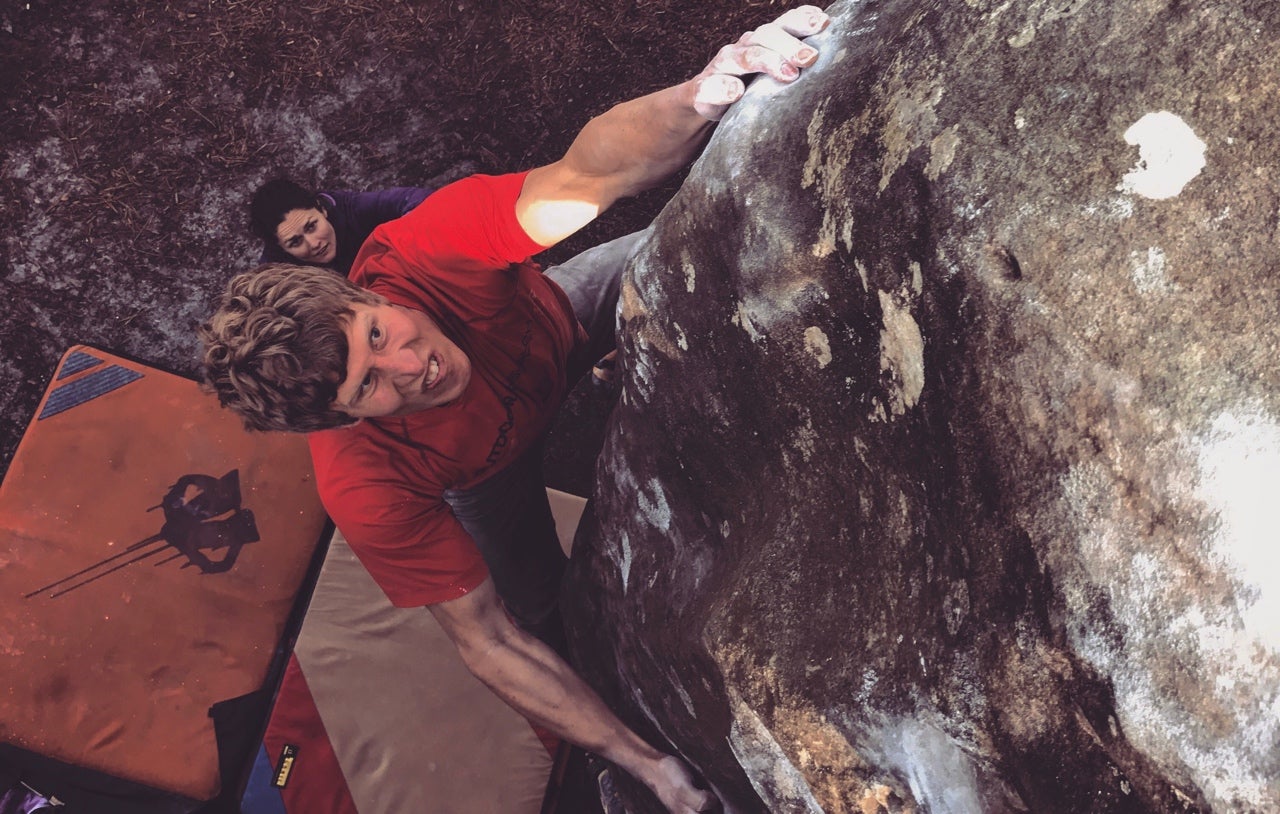 My right hand grips onto a mediocre sloper, while my feet smear on the glass of La Marie-Rose, a center line up a perfect sandstone Fontainebleau blob. I adjust my body to reach another left-hand sloper. The crisp morning temps make the holds feel good despite the 19mm of precipitation over the last five days. But … I’m off. I’m falling ten feet to the flat sandy lake bed. Turtle shell slopers, egg shaped boulders, dense forest, and flat sand landings are synonymous with Fontainebleau bouldering. Last Fall my Salt Lake City friends invited me on a month-long trip to the area 70 kilometers southeast of Paris, and I immediately agreed. What I hadn’t agreed to was the five days of rain and festering, sitting around drinking Leffe, France’s staple light beer. When the early March clouds lifted, I ran through a forest of damp leaves toward La Marie-Rose, the first 6a established in Font by Rene Ferlet in 1946. Excitement coursed through my body as I grabbed the opposing sidepulls, clumsily placing my feet and reaching for the slopers above. When I hit the sand below La Marie-Rose, I realized that the rich history and difficulties of the birthplace of bouldering were real. 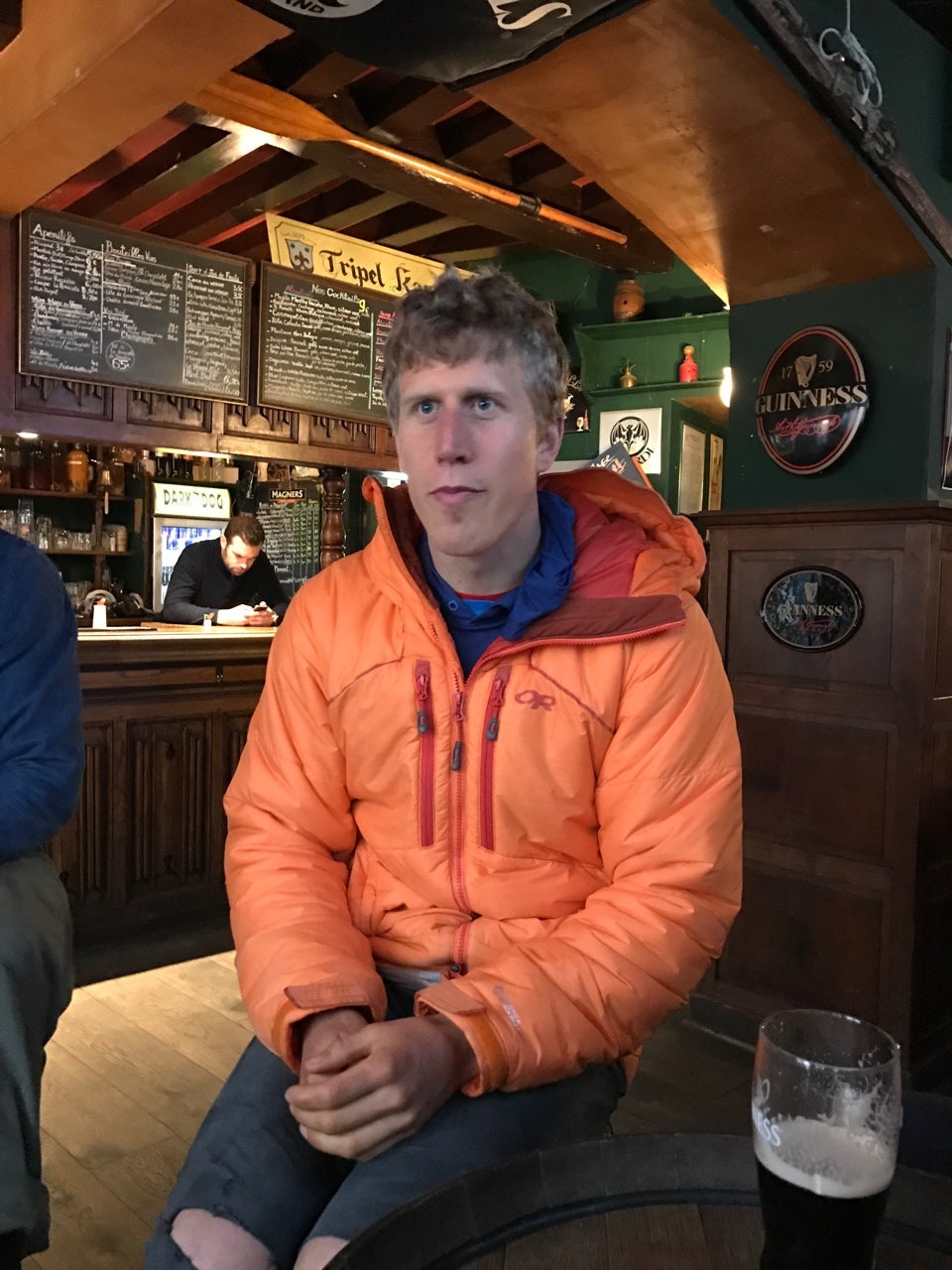 The 110 square miles of Fontainebleau hold problems for everyone from toddlers to 8c/V15 climbers. Climbers began establishing problems around 1870. The large and dense forest still sees new areas and new boulders established every year, even in the most popular zones. Font has a richer history than any other bouldering area in the world—the first to make bouldering an autonomous form of climbing, it inspired newly developed climbing gear, served as preparation for mountaineering and also as a place to push the standards of difficulty. Font is a place to learn about climbing and how to master it. 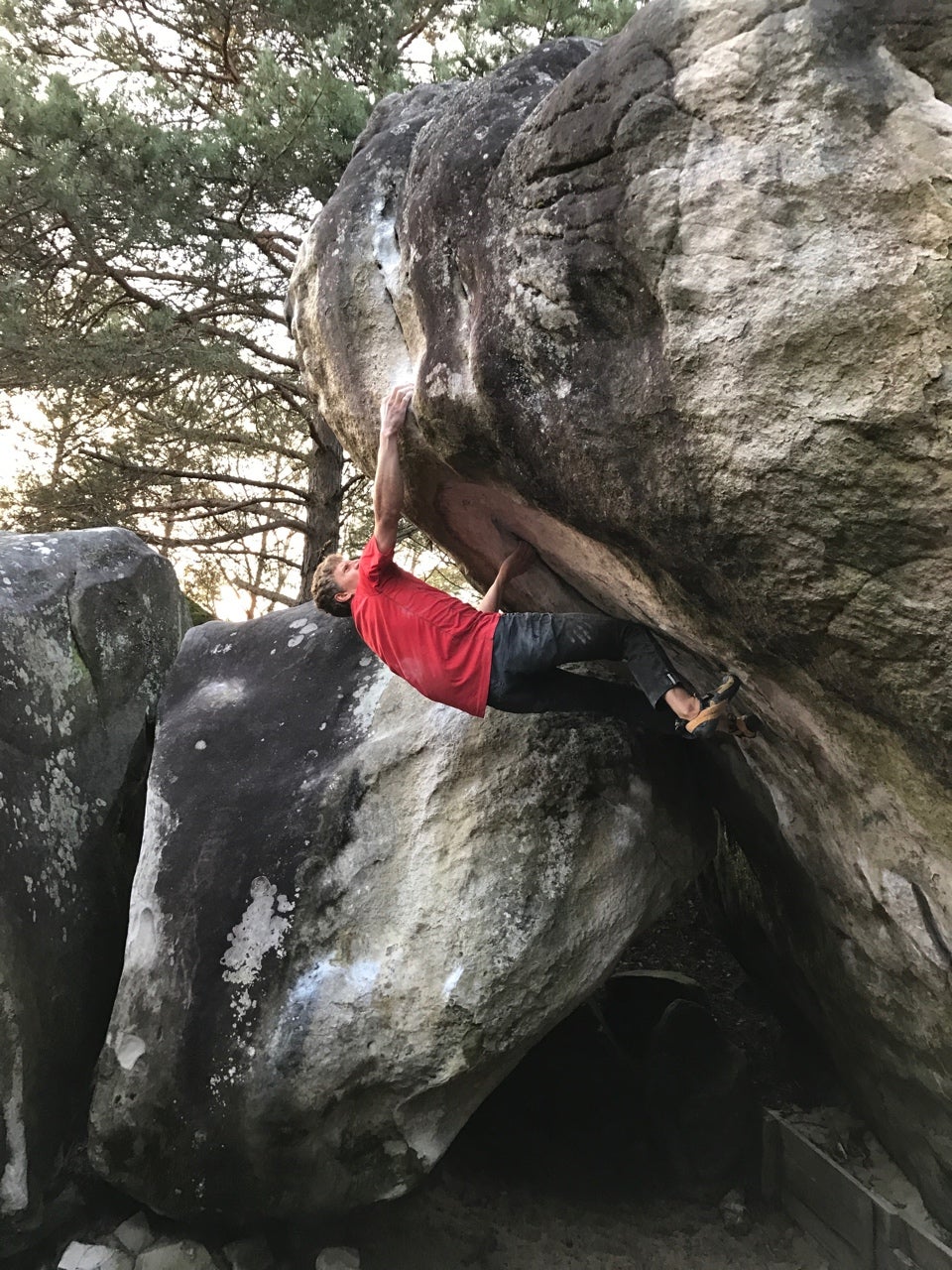 Climbing in Font began in 1874, when the Club Alpin Francais, a newly organized collection of French climbers, organized bouldering sessions in Font to train for alpine objectives in Chamonix, 172 km away. They developed footwear in the boulders, initially wearing spiked shoes to climb. Then in 1913, the Lepiney brothers used espadrilles, moccasin style shoes with rope soles to help climbers to smear. The espadrilles provided more friction on the sandstone and initiated the idea of high friction soles for climbing.  This obsession with sticking to the rock led to the use of resin in 1932. Locals used resin, or “pof,” a highly viscous, sticky derivative of pine sap, by beating it against the rock and then applying it to their shoes and hands. Unfortunately, pof leaves a black glassy residue making subsequent ascents more difficult without it. 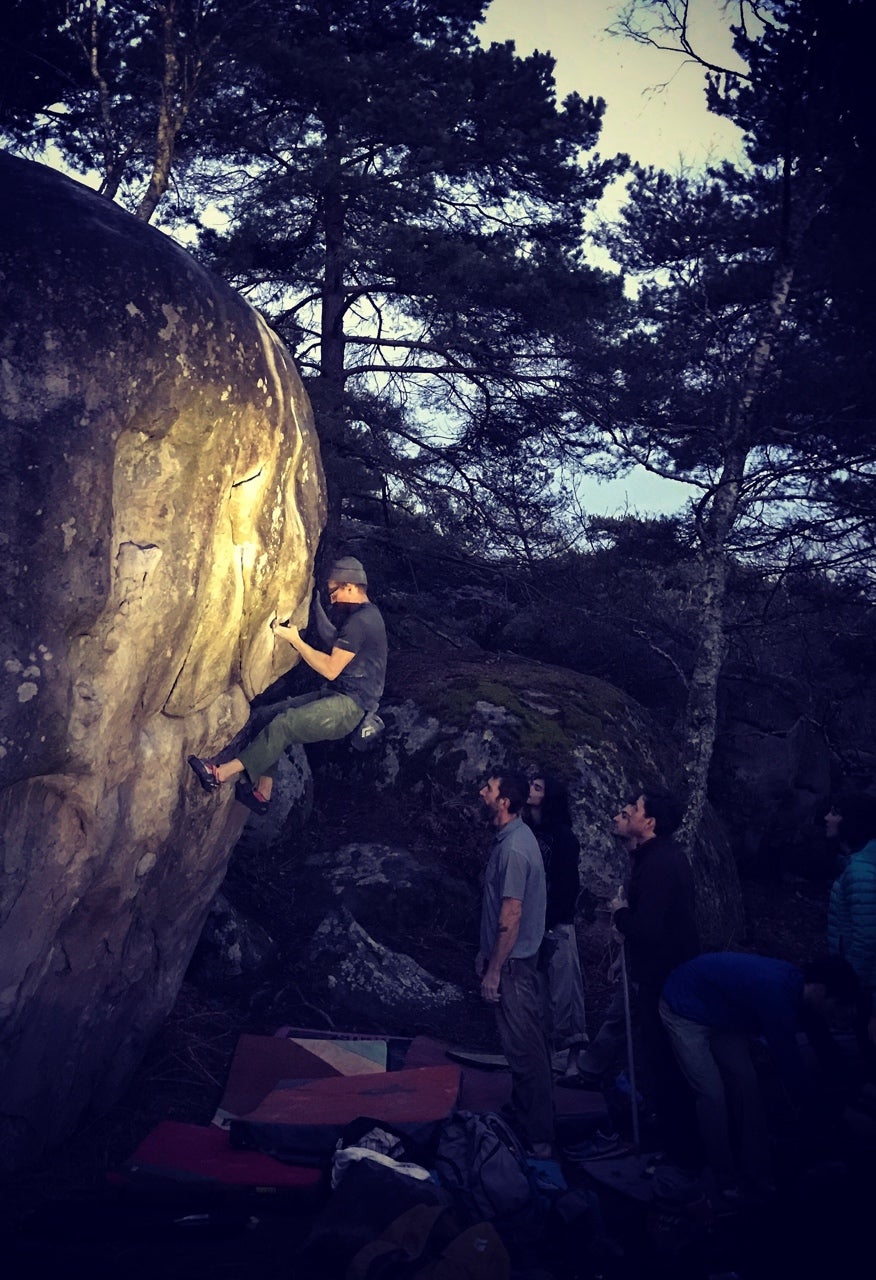 The introduction of pof coincided with raising standards in the boulders. In 1930, Pierre Allain, a Parisian born in 1904, commuted to Font by train with his fellow climbers and friends in a group called Group de Bleau or Bleausards. In the winters, Pierre Allain used Font to train for Chamonix alpine objectives, including the FFA of the North Face of Little Dru and the southwest ridge of Aiguille du Fou. Considered the best climber of his generation from 1930-1940, Allain’s most notable ascents weren’t on the mountains but in Fontainebleau. When La Marie-Rose was originally established it was rated 6b. Pierre Allain repeated the problem shortly after and down rated it to 6a.  He then went on to put up his own ascents. In 1934, Allain climbed Angle Allain (5+) an arête as clean as a perfectly cut block of cheese. Beyond his climbing contributions, Pierre also invented a high-top climbing boot with hard composite rubber soles. PA’s, short for Pierre Allain, became widely popular and climbers across the world wore them. Pierre took his ingenuity and applied it to other climbing gear, including sleeping bags, down jackets, alloy carabiners and the descender. By 1960, Pierre developed climbing shoes further, partnering with Edouard Bourdonneau to create EBs, a shoe that used a stickier Spanish resin sole.

While Pierre’s influence shaped global climbing gear, the Bleausards influenced climbing in another, more profound way. The Bleausards changed the way climbers approached boulders. Instead of using the boulders simply to train, they began bouldering simply to boulder. They became masters of movement. The Bleausards learned that mastering a move required repetition. This allowed them to find the exact body positions to perfect their movement. They would climb with rugs to land on or straw pads to help absorb their falls. 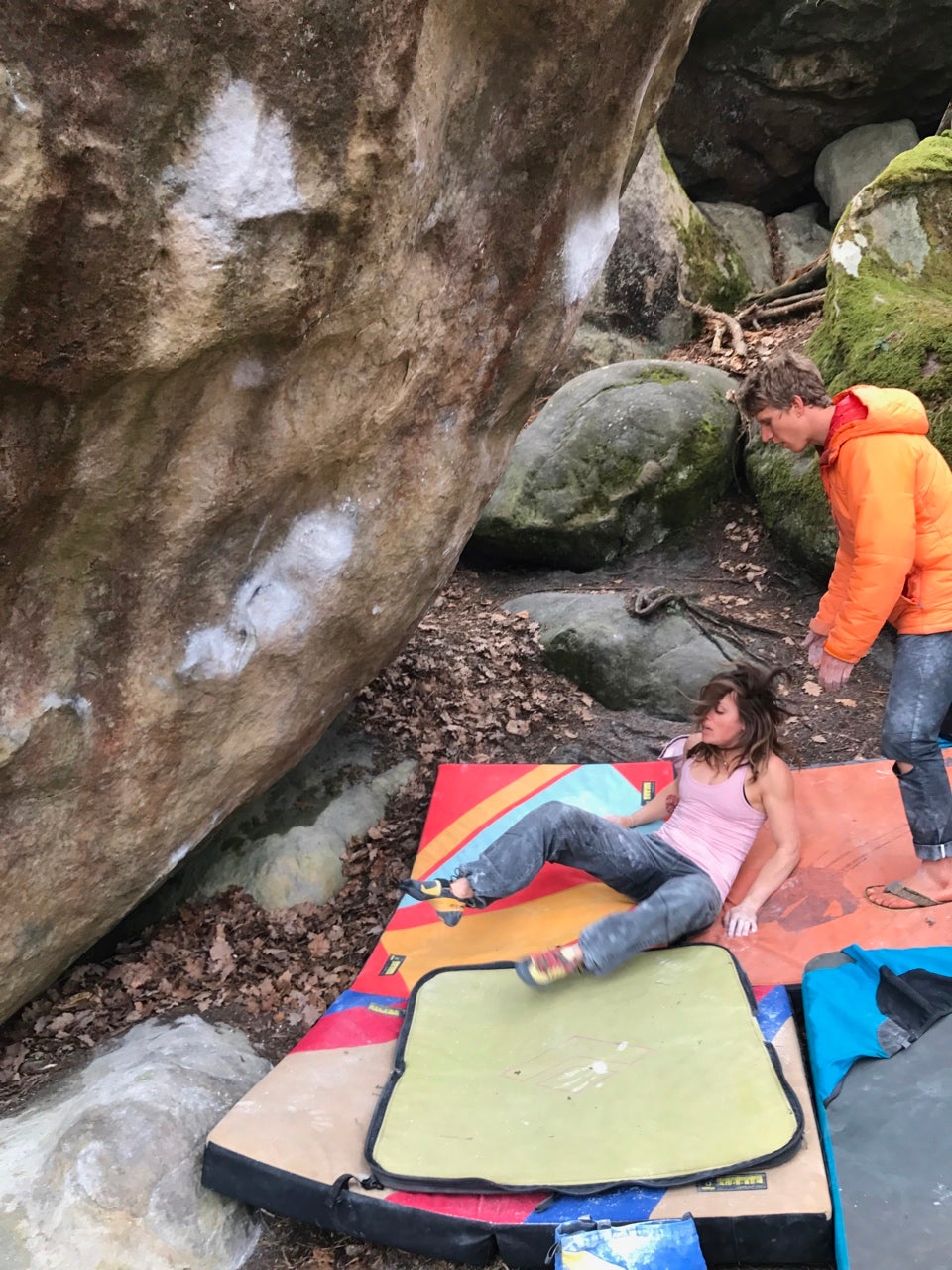 “The falls are of no consequence,” Pierre Allain said of the sandy landings below the boulders, which allowed them to practice their art. “If need be, we can try a given hard start 20 times in a row, learning thereby, with exactitude, the friction limits between rock and rubber. We can detect precise [sense] balancing, trust incredibly small holds and in this way acquire the qualities of a climber that are superior to those given by any other major school rock-climbing.”

By 1945 Maurice Martin created a climbing topo to Font that included Bas-Cuvier, Elephant, Puiselet, Dame Jouanne and Malesherbes. A younger generation began climbing harder problems.  Two years later, Fred Bernick began creating Fontainbleau circuits, stringing a series of boulders together. Bernick and then later locals, numbered each boulder and then gave them a corresponding color. After selecting a color, the climber climbs problem 1, summits, and then follows an arrow on top of the boulder to problem 2, 3, and so on. Circuits riddle the forest, with larger areas featuring more problems; however, volume and difficulty are considered with the ratings. The circuits resemble adventure running, requiring climbers to find the correct problem and descent. Using a pad is difficult due to the number of climbing moves and that the circuits rarely circle back to the base. It’s almost as if you’re a child running through a playground for the first time, discovering and learning what Fontainebleau has to offer. Through these circuits, new visitors can experience Font not only as a former training ground for Mont Blanc but as one of the best bouldering destinations in the world.

Beyond the circuits, the Bleausards’ futuristic view on bouldering gave the next generation the ability to focus purely on bouldering. In 1956, Jacky Godoffe, an exceptional climber born in Melun, France, just 23 minutes from Fontainebleau, began establishing classic problems in the forest. Of his 64 first ascents, Godoffe established three of the notorious Big Four problems in Font, a series of five-star boulder problems on top of the hill of Cuvier. Along with C’etait Demain or It was Tomorow, the first 8a (V11) in Fontainebleau, Godoffe also established Hypothese (7c+), Partage (8a+), Total Eclipse (8a+) and Fat Man (8B). The forest contains incredible classic hard problems as well as either ones. 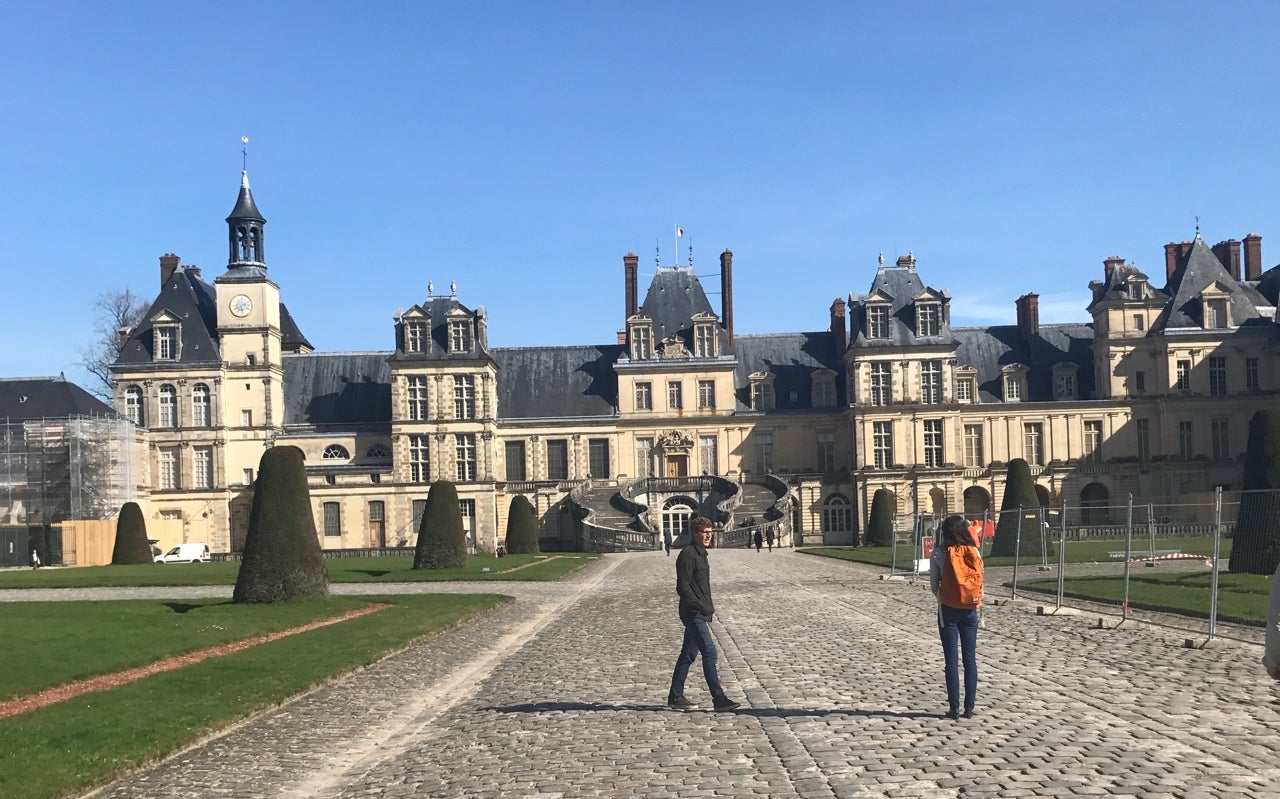 After a few calming deep breaths, I focused and went through the beta in my head. I stepped back onto La Marie Rose, returning to the lip with my right hand on the sloper. Channeling my inner Godoffe, I trusted my shoes like Pierre Allain, and imagined I was a Bleausard. I spread my feet to balance and slapped a left hand sloper. Suddenly I was mantling to the top of the boulder. Summiting such a classic bloc felt good. I had quickly discovered that climbing in Font requires subtle movement.

The Bleausards pushed bouldering forward in Font with their groundbreaking ascents in esparadilles and PA’s, their innovations, and their approach to bouldering. And climbing might not be where it is now without them. Each era of climbers in the forest built upon one another, and as I ran through the forest of Font—climbing the circuits, trying Big Boss, Partage, and La Marie Rose—I learned that the subtleties of movement were just the beginning of climbing in Font.