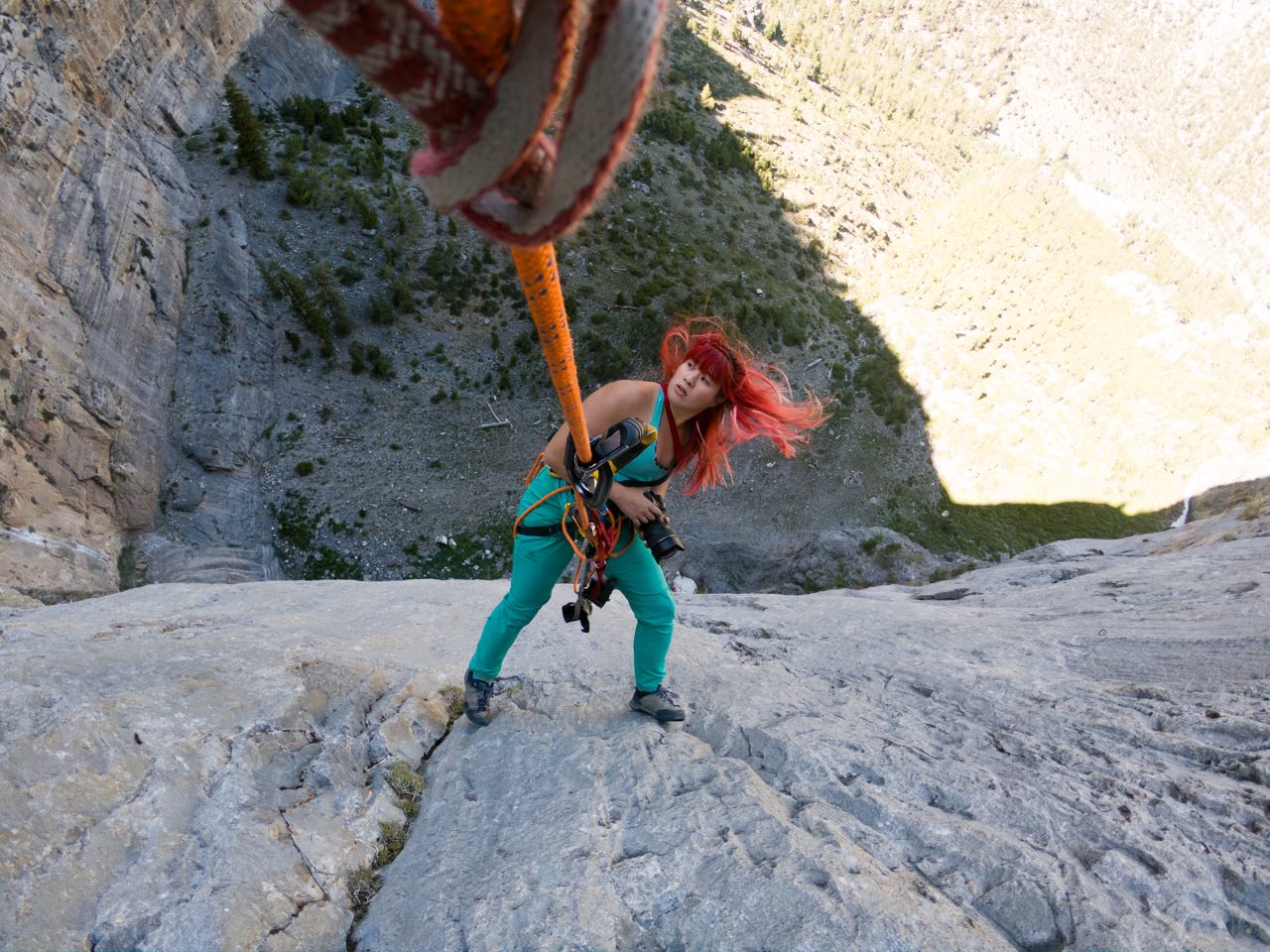 This month we’re getting to know the stories behind the faces in Krystle Wright’s latest film, Where The Wild Things Keep Playing, an ode to the athletes who are unapologetically pursuing their outdoor adventures—without changing a thing.

For Irene Yee, her life in the outdoors has been—and continues to be—an evolution of reaching out for what inspires her and learning to listen to her heart and her body instead of what she perceives culture is telling her. You may recognize her as the climber in Where The Wild Things Keep Playing with the brightly colored hair, but her love for outdoor adventure started before she learned to climb.

A passion worth driving for.

Yee's love of outdoor adventure was sparked after college when a friend took her for a hiking trip in the White Mountains. She hadn't grown up taking outdoorsy vacations, and the experience was impactful. "I realized how much I loved it out there, and how different it was from the city life," she says. She lived in Boston at the time. "I used to borrow my parents' minivam in the summer, and drive four hours up to New Hampshire to hike for four hours, and then drive four hours back just because I needed to get away."

She started backpacking and loved how being outdoors made her feel. "I noticed how much more I liked myself in that space," she says. "I was calmer, I was more active, and I was seeing beautiful things."

On the power of inclusive groups.

When Yee took a leap and moved to Las Vegas from the East Coast, she wanted to meet new people and find a gym where she could work out. "I went to a meetup at a local climbing gym," she says. "And I got hooked ... I went twice, and they were so inclusive they invited me to climb outside. When I touched real rock, that was the end of it." She says she knew immediately that was what she wanted to spend her time and money on. She had found what she'd been missing back in Boston: time in the sun, outdoor activity and community.

Learning to pay attention to what you really want.

As she dived into climbing and started photographing her days out with her friends, Yee started to gain an Instagram following. And she observed what seemed to be the accepted track for progressing climbers: "With any sport there’s a progression people think they have to follow," she says. "And there comes this point where it becomes hard, where they say, 'I've hit this plateau,' or, 'I’m starting to get really scared.' "

Yee had to ask herself if she was still a "real rock climber" if she wasn't pushing herself at an elite level. And she realized she enjoyed exactly where she was with her climbing life—sticking to moderates and aiming to be home in bed when she wanted to be instead of worrying about epicking. But that realization required her paying attention to her own inner voice instead of what she heard from the outside.

A special gift from a friend.

One of Yee's recent climbing highlights was a first ascent in Utah. "I personally hadn't thought [putting up first ascents] was for me," she says. "But it was interesting learning about that process. Climbing the route is definitely just the last 10%." The FA was a gift from her friends who'd found the crack, cleaned it and bolted it. "I was so scared to lead it, it took me five tries," she says. "I wanted to do it in good style." In the end, she says, the climb was a fun moment and a reminder that someone has to put in the work to develop moderate routes, too—like that one, a 5.9—not just super hard routes.

Aiming for a lifelong outdoor life.

Yee is inspired by people who keep getting after it in the outdoors throughout their lives, and is looking at what that might look like for her life. "The outdoors is a huge part of my life now, and I choose to make it that way," she says. "I’m a much better person with sun and fresh air and exercise. ... My overall climbing goal is that I want to be climbing into my 70s, and I want to make sure I’m not pushing myself to where I break myself or scare myself." Whereas many climbers may have lofty goals for climbing harder, Yee says she simply wants to make sure the outdoors stays a part of her life.