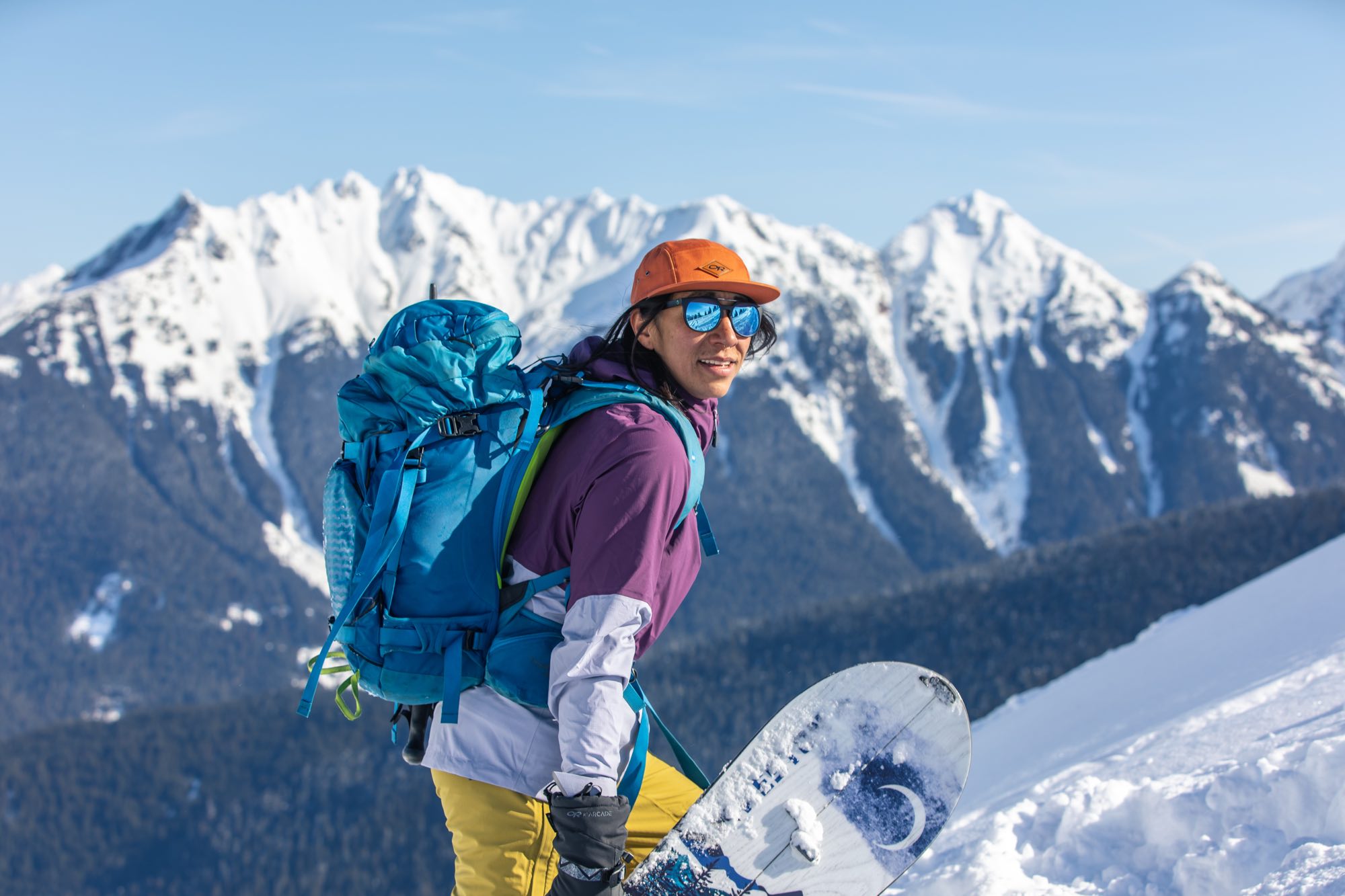 From surfing to splitboarding volcanoes, to working toward inclusivity in the outdoor world, Dani is intent on not settling.

Dani Reyes-Acosta’s two favorite books, the ones she most often recommends to friends, explain a lot about her. The books? Women Who Run With The Wolves by Clarissa Pinkola Estés and Climbing Anchors by John Long and Bob Gaines. “How to be self-sufficient emotionally and technically,” she says. For Dani, an Outdoor Research ambassador, those two types of empowerment go hand in hand. They’re the tools she uses to build her freelance, outdoor-based life.

She may be a multi-hyphenate (brand strategist-marketing educator-mountain athlete-environmental justice advocate) but there’s a distinct through line in everything Dani does: unlocking the power within, and using that power to make the world a better place. She’s semi-nomadic, often taking her work on the road in her van. So some days that might mean focusing on being mindful during a ski tour, other days that means working with brands like Nike or Vail Resorts on how to be more inclusive in their marketing. We chatted on the phone while she walked dirt roads near her home base in Southwest Colorado, sharing some of the journey that has led her to her semi-nomadic freelance life.

Dani grew up in Playa Del Rey, the outdoors a deep part of her identity.  But when life moved her from the coast to California’s Central Valley in the middle of high school, the outdoor part of her life shifted into something totally unrecognizable. “I kind of lost everything I knew or understood about myself,” she says. It wasn’t until she started college in Santa Barbara that she dove back into surfing—and it wasn’t until she took a contract job with Nike in Portland that she began to pursue the mountains, all the while trying to get back to the relationship to the outdoors she’d had as a girl.

She bought a ski pass, started climbing at Nike’s rock gym—and it happened. A connection and feeling of creativity sparked to life that she hadn’t felt in lap swimming or running on a treadmill or track. “If you see the bouldering problem unfurl in front of you, you start to piece it together, there's a strange but really cool linkage between that psychological aspect of what you're doing with climbing that links back to your physical unlocking of stress at the same time,” she says. “After a two-hour bouldering session, you can go back to work and be totally on it.”

Dani put herself out there to learn and challenge herself as an athlete, and also to meet people. She had moved to Portland sight-unseen, and it required stepping into new spaces  to meet new people. Striking up a conversation with a stranger on a chairlift, or reaching out to people at the gym. But the more she built her community in those directions, the more those people continued to pull her outdoors.

A couple of years into her life and work in Portland, Dani found herself rethinking everything. it was ultimately the ending of an unhealthy relationship that urged her forward. “When I stepped out of that space with that person, I asked, what else am I doing in my life that's not for me—doing it because I think I’m supposed to be doing it?” she says. “And I just started reevaluating everything.” At this point, she felt ready to graduate from the corporate work she was doing, to embrace a different kind of life.

She looked at her living situation, her work, everything, and began asking herself whether each part of her life was contributing to her long-term growth.

“I had been drinking the Kool-Aid of whatever life and society told me was going to make me feel great, make me feel fulfilled, and make me feel happy,” she says. “I looked at my life and realized I was none of those things.”

The end result? Quitting the job and buying a one-way ticket to South America. Once there, she bought a Subaru and hit the road for 13 months, traveling through Chile, Argentina and Peru. She had ideas about potential projects, but ultimately concluded that travel for travel’s sake fed her soul.

Solo, she climbed and splitboarded Chilean volcanoes, traveling through villages where she found herself answering the question, “Where is your husband?” And while the trip and the peaks were proud sends, she says those were secondary to the sense of coming into her own and taking charge of her own life. It was a turning point.

On returning to the U.S., she struck out on her own, beginning the hard, lonely work of building a freelance business in a mountain town. Her tenacity paid off, landing her rewarding gigs—like being recruited for a contract to help Vail Resorts reposition and rebrand their safety campaign. “In a way, I was marrying change management with human-centered design,” she says.

Through it all, Dani still relies on the outdoors as a place to push herself, grow and also recharge and reconnect. “Sometimes it's a place to just seek some solace,” she says. That relationship shifts with the seasons—sometimes trad climbing, sometimes splitboarding, sometimes surfing. But all the time, it’s fun. … I found that taking myself too seriously was just never a good recipe for long-term mental health or success,” she says.

What she’s learned from living so much of life on the road:

“You'll need less things than you think you will. From a consumer perspective, having just a few pieces of really good gear can get me through months and months of travel. So that's just something super simple and makes life easy. You don't need as much stuff as you think you will.”

Advice for people thinking of moving into a van:

“Have up to six months of savings in the bank.”

What gets her riled up:

Sexism and toxic masculinity in the outdoors. “I've been surfing since I was 13 years old, and I started surfing as a woman in a male-dominated environment . And first of all, I'm a woman. Second of all, I'm brown. Every single day I go surfing, especially after I passed through puberty, was some sort of invitation for sexual innuendos. … I've surfed some pretty big waves in Mexico and Chile and California, and I'm just over it. There’s just toxic masculinity at its most raw and unadulterated version.”

Dani says she often sees a similar vibe in mountain people, which causes her to choose her partners carefully and to consider her own attitudes. “I try to be very judicious with who I ski with or climb with. And, in the mountains, what kind of person am I? I try to be as patient as I am persevering.”

Favorite snack for climbing or skiing:

“I love turmeric golden milk. I put that in a thermos.”

“Buying that Subaru in Chile.”

“The Secret Life of Walter Mitty” and “Frida.”

And for books, well, you already know her favorite books.