Opinion: What Do We Mean When We Say "Alpine" Climbing? 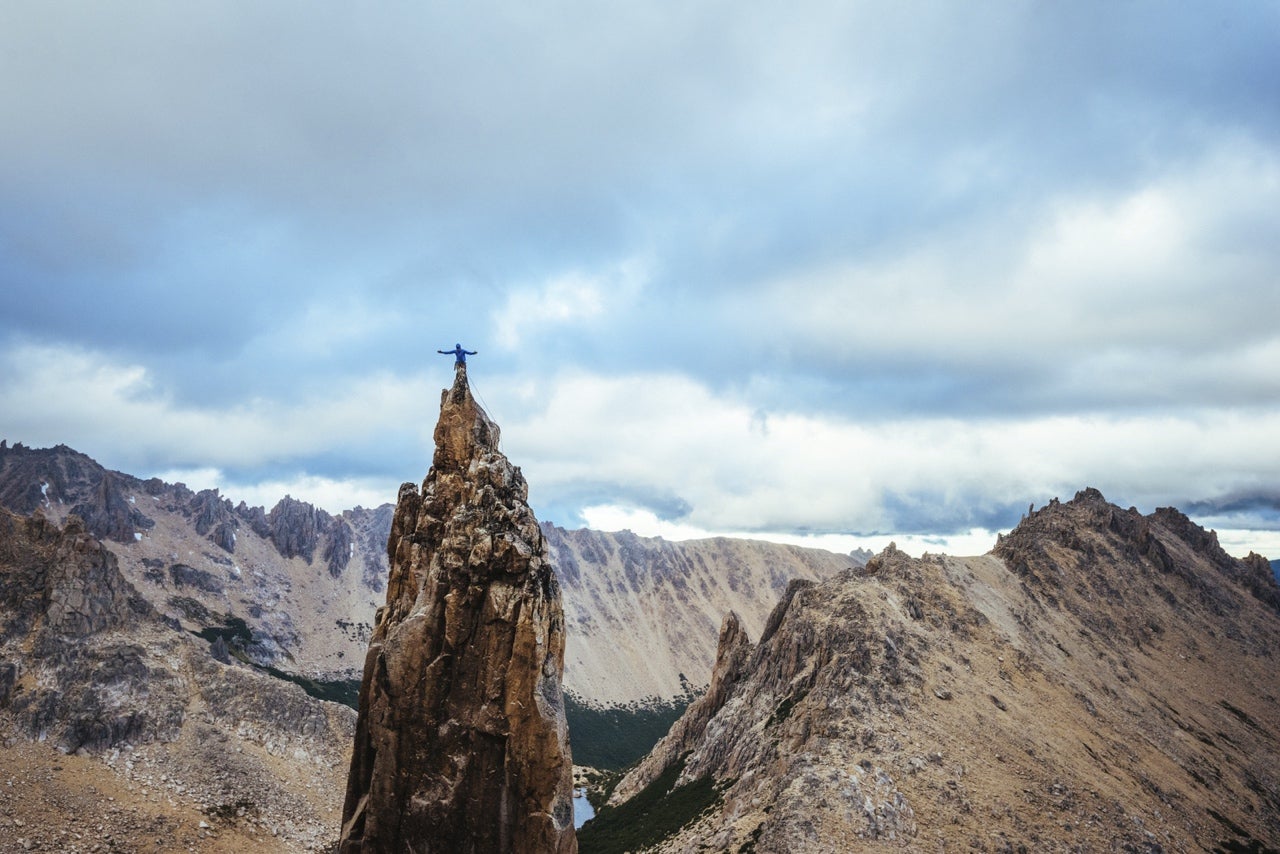 What do you think when you hear the word "alpine"? What kinds of dangers, complications, and challenges do you imagine if someone tells you they'll be "alpine climbing," as opposed to “rock climbing”? In my opinion, most experienced trad climbers, self included, even if they've climbed a lot in the mountains, have done very little of what should be called "alpine climbing." And "alpine" climbing is a term being made increasingly meaningless through its growing ubiquity and lack of definition, with new climbers embracing the label for a wide range of uses. No two people might imagine the same thing when they hear or say the term. And simply slapping an "alpine" label onto an area or route often just makes it sound overly complex or dangerous without necessarily reflecting conditions accurately.

Like any humans, climbers love to label and group things into specific categories and ignore the nuance and differences within those groups. Without ever defining what these categories mean, we ask the world for info on the best "trad" shoes, hardest "cragging" routes, and favorite beginner "alpine" climbs. This is especially true when stepping outside our normal purview and comfort zone, where the added stressors make us want to call something "safe" or "unsafe," "sketchy" or "bomber," so we can have finality and be done thinking about it. Folks talk about creating distinct divides between their "normal" climbing and "alpine" climbing. But most of life can't be precisely categorized, especially among categories that are left broad and ill defined. By seeking to label a climb as purely "A" or "B" we are ignoring the details of the potential challenge, glossing over what might be particularly difficult or surprisingly easy within a given pitch or climbing area.

As Instagram and satellite phones have brought the climbing world daily updates from expeditions across the globe, phrases like "weather window" and "speed is safety" are getting carried from the world's largest mountain ranges and used to describe summertime conditions in places like the Sierra, or the Stuart Range, which simply don't require one to climb as quickly in order to succeed or to be safe. These areas, and nearly every popular "alpine" spot in the Lower 48 and southern British Columbia, have generally warm, calm, and dry weather in the summer, with solid rock climbs from four to 14 pitches, no glacial or ice challenges in summer, and walk-off or simple and equipped rappel descents often described in guidebooks and numerous websites. These places are more accurately viewed as backcountry rock destinations, with some of the peaks and walls nearly roadside. Veteran alpinist Colin Haley, who has made dozens of trips to the peaks of Alaska, the Canadian Rockies, Patagonia and the Karakoram, has called the North Cascades the only truly alpine terrain in the Lower 48, and suggests that year-round snow and ice on north-facing slopes, as well potential for sudden snowfall even in summer, should both be considered criteria for defining something as "alpine." 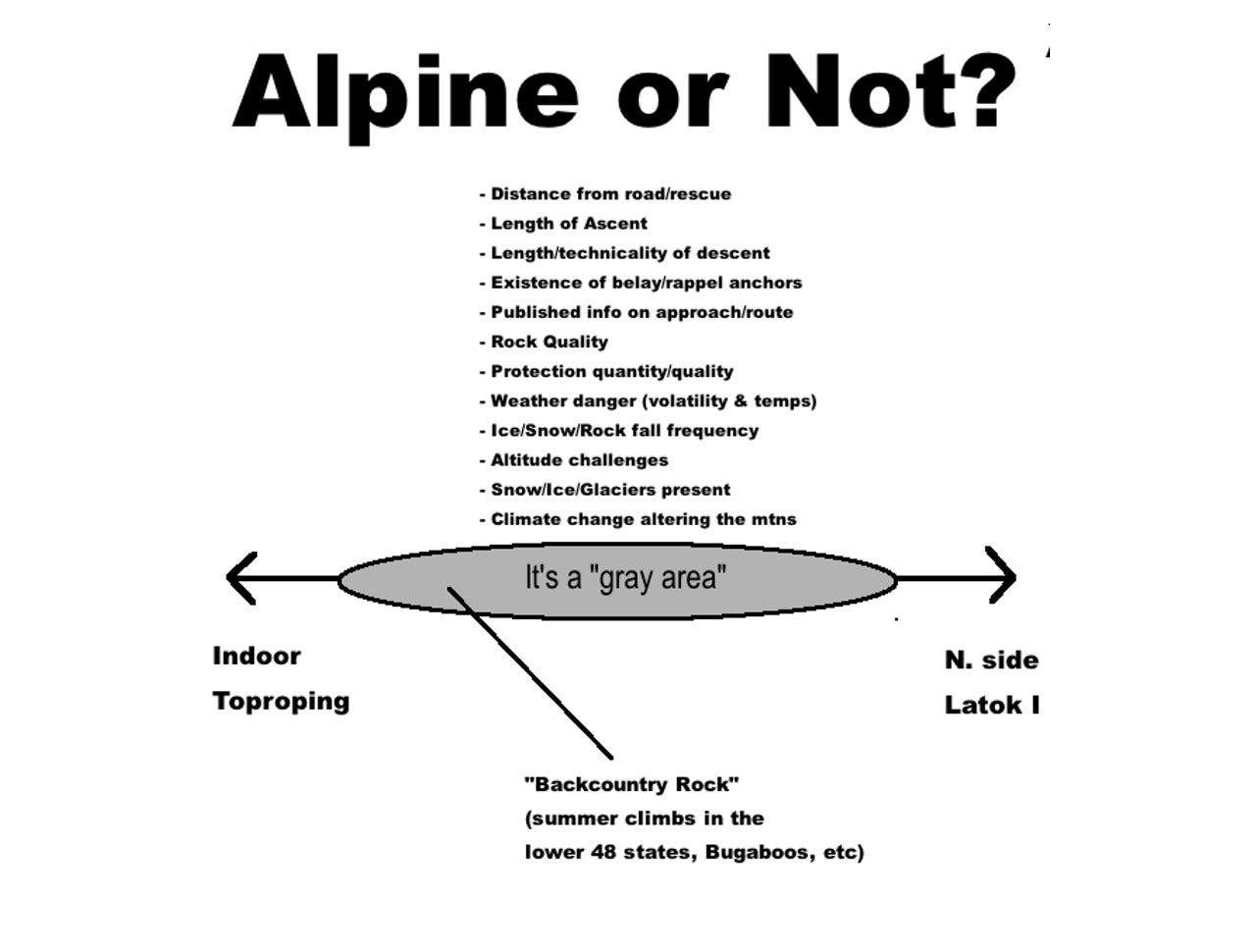 For the vast majority of climbers in the US and Canada who aim toward what they call "alpine routes," the desired tick list is a bunch of backcountry granite rock climbs with few or no actual "alpine" challenges. One doesn't need to put these routes and ranges on a separate pedestal apart from the multi-pitch rock in places like Eldorado State Park, Utah’s desert towers, the Black Canyon, The Needles, Red Rock, Zion, etc.

Rather than focusing on a cardio-first expeditionary-style training program like those described in Training For the New Alpinism, simply be a good rock climber first, be good at climbing granite trad pitches specifically, and be good at climbing (or aiding) these pitches quickly, without stressing yourself. Then be in decent enough overall fitness and with physical resiliency to handle the approach and your hike back to the car without getting destroyed or too exhausted to rappel and descend safely. Don't focus your stress, planning, or training on what you may already be good enough at (the hiking, a short glacier walk approach, making coffee at 4 a.m.) if, like for most of us, it's the movement on rock that actually may shut you down. 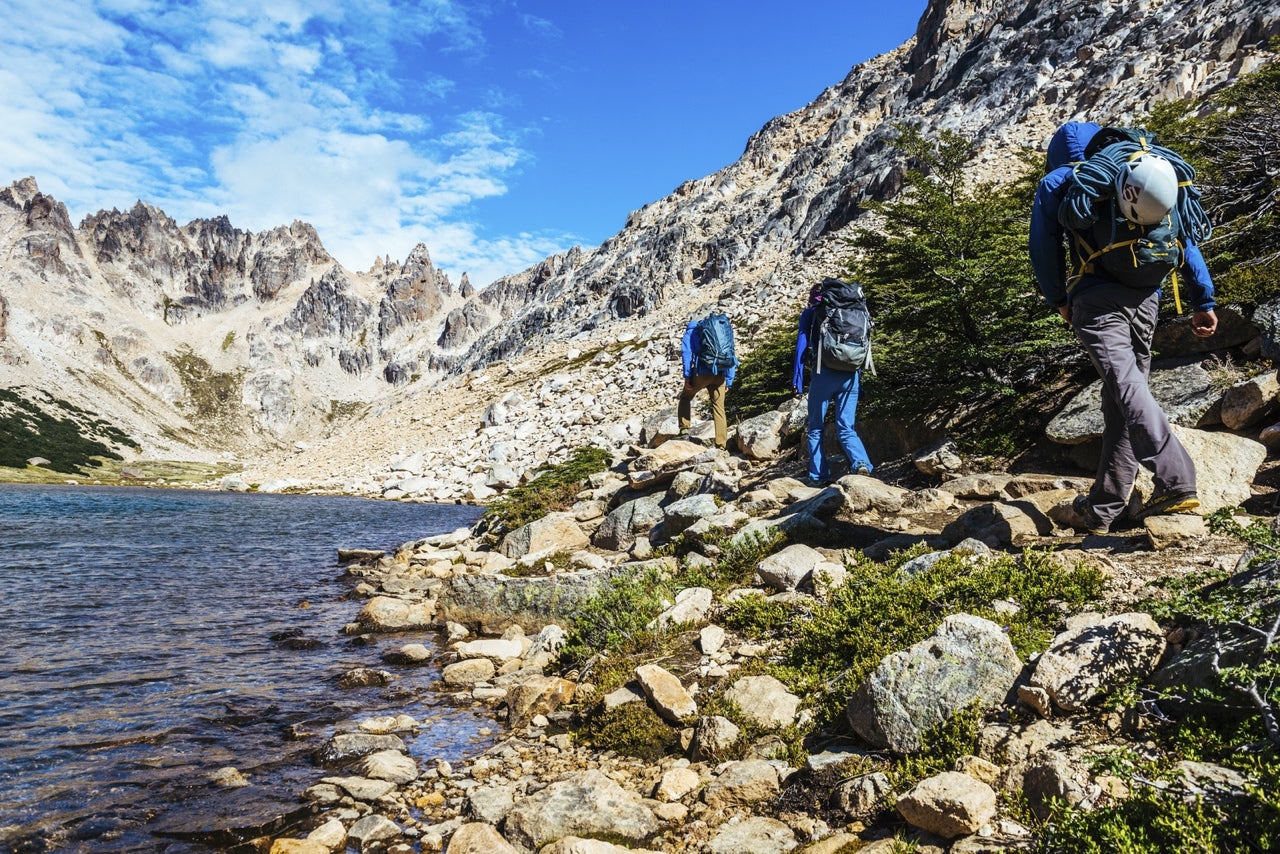 My point is not to have folks simply ignore some potential challenges or dangers in their way. Instead, I encourage everyone to examine the meaning behind the labels that get thrown around, in order to see what's truly behind them. Do you really need to create a dichotomy between this pitch and that pitch? Or this wall, and that mountain? Do these categories, and the elements that define them, make sense to use and hold separate in your mind? You might find that the big, scary, bogey-man term of "alpine climbing" is usually a sheep (or mountain goat) in wolf's clothing.