Speak To Me Softly 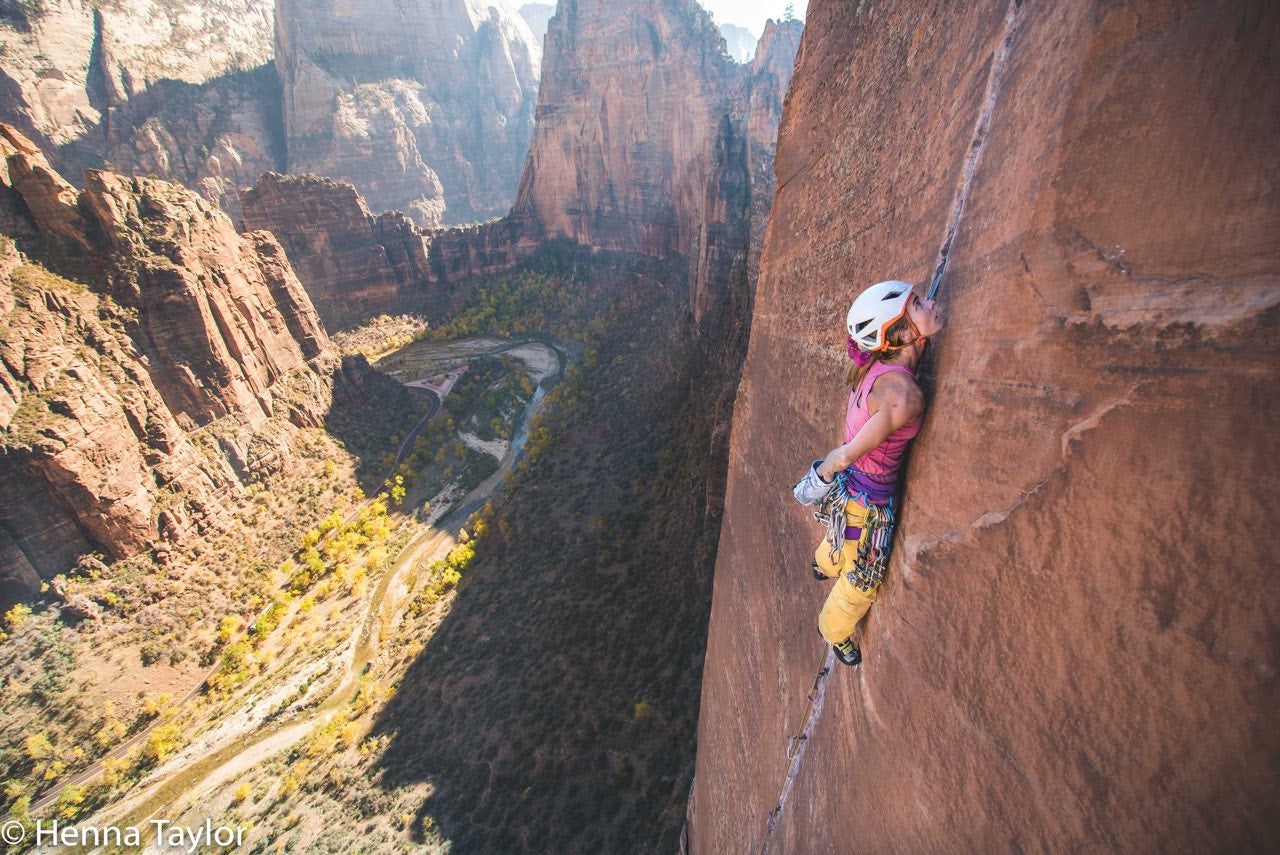 When Jenny Abegg—the climber in Speak To Me Softly—first free climbed Moonlight Buttress in Zion National Park, she thought it was the logical next step in her climbing life. But as you see in this film, things didn't go quite according to that plan. We asked Jenny and filmmaker Henna Taylor for the behind-the-scenes story.

Jenny: "My partner Becca was super psyched on the climb. "She’s a super strong boulderer and sport climber who had never done a ring lock in her life, but had the drive and excitement to make up for it. We thought our opposing strengths would pair well together, and I guess I thought I was psyched too. It really seemed like the next step for me. I’d climbed a fair share of 5.12 at this point, I loved finger cracks, loved long climbs, I had a lot of friends that had freed Moonlight... so I should too, right? Projecting a big hard climb was what I wanted to do... right?"

Jenny: "Moonlight is four moderate pitches to a big ledge called the Rocker Block, and then six 5.12 pitches in a row—all very sustained finger crack climbing."

Jenny: "On our first trip, Becca and I spent a little over a week sussing out the pitches and climbing different parts of the route each day, with the goal of putting it all together on our last day. The whole trip, I felt an irrational fear that I really couldn’t figure out. I didn’t sleep well at night, I woke up in a state of dread. I knew I should have been having fun—I was with a fun crew, the weather was great, all in all it’s a rather stress-free climb, especially compared to the more dangerous objectives I’ve taken on in Patagonia or other mountain ranges, but I wasn’t having fun, at all." 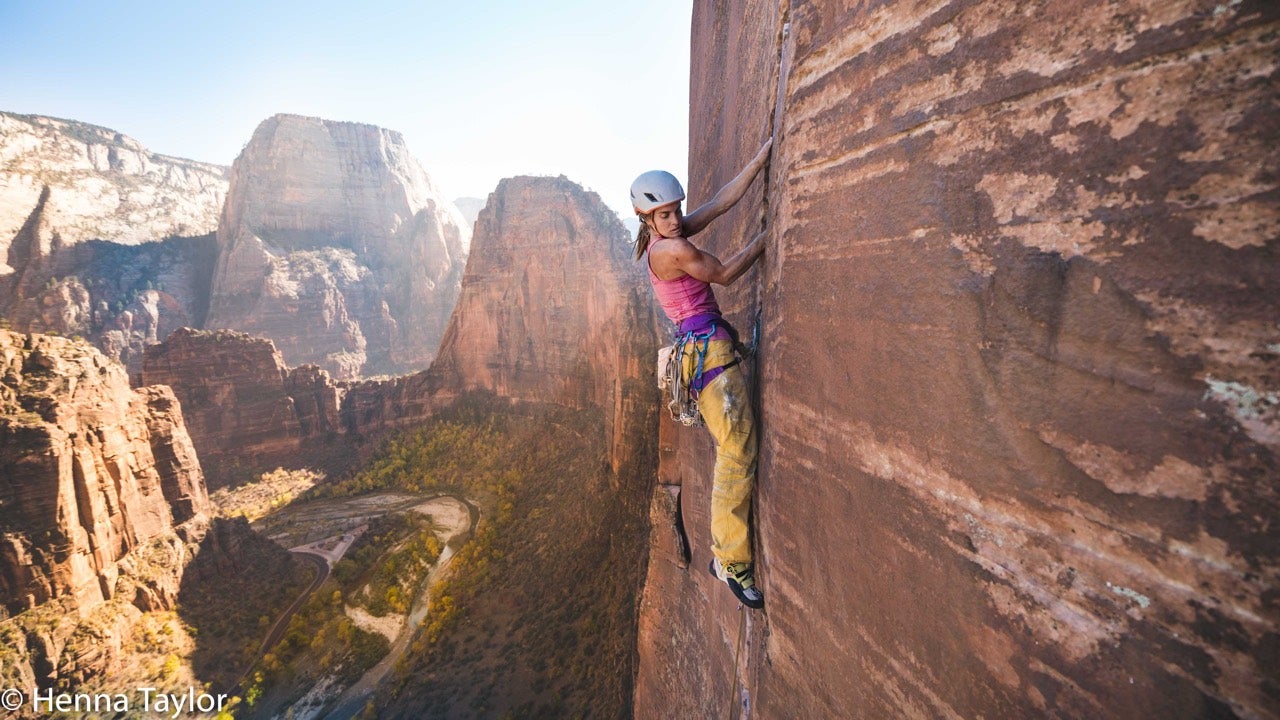 You were overwhelmed with an unexplainable fear?

Jenny: "I could not get over my fear of falling, even though I knew the gear was good, that Becca would catch me, that I could almost climb each pitch with my eyes closed. I would clam up before each lead, dread the climbing, put my shoes on slowly so as to delay the inevitable. I was just so anxious, and I had a hard time figuring out why. If this wasn’t fear of falling ... what was it?

"It’s almost beside the point, but I ended up sending the route on that trip. I surprised myself by freeing the consensus crux (the second 5.12 pitch) on top rope. The next pitch, the slot chimney-turned-lieback, was supposed to be my lead, but I couldn’t will myself to do it. The irrational fear that I couldn’t figure out took over, and I handed the lead over to Becca, then freeing the pitch on top rope. I led the next pitch, a pretty chill 12-,  and Becca took the last two 5.12 pitches. I felt completely defeated at the top—like I had totally surrendered to a part of myself that I didn’t like or understand. I had led only two of the six 5.12 pitches, and I had completely given into fear, or whatever it was that was controlling me. I definitely hadn’t sent the climb of my dreams, in a way that I could take pride in at least."

And then that frustration stuck with you?

Jenny: "I returned home, and throughout the next few months I thought about moonlight from time to time. I tried to write about it, and I didn’t know how. I’d stare at the screen as my mind did somersaults over the events of the week, the feelings I had, the sense of dread I experienced. I still didn’t understand what was going on for me, and didn’t know how to figure it out."

So how did the film come about?

Jenny: "During this time I went to Banff Mountain Film Festival and met Matt, who had directed a film with my friend Francois. Over dinner one evening with a bunch of friends, we threw around ideas and got excited about making a climbing film about fear—a film about the emotion that all of us feel when climbing, but rarely talk about. A film not about sending the gnar or living the dream, but about the shadier internal side of it all. At this point Becca and I already had plans to go back to Moonlight in the spring. Henna was an easy shoo in to get involved with the film, as I respect her creativity and vision with most everything, and she had been with us the previous fall collecting footage for Becca’s incredible creative endeavor, Hip Hop Gone Wild." 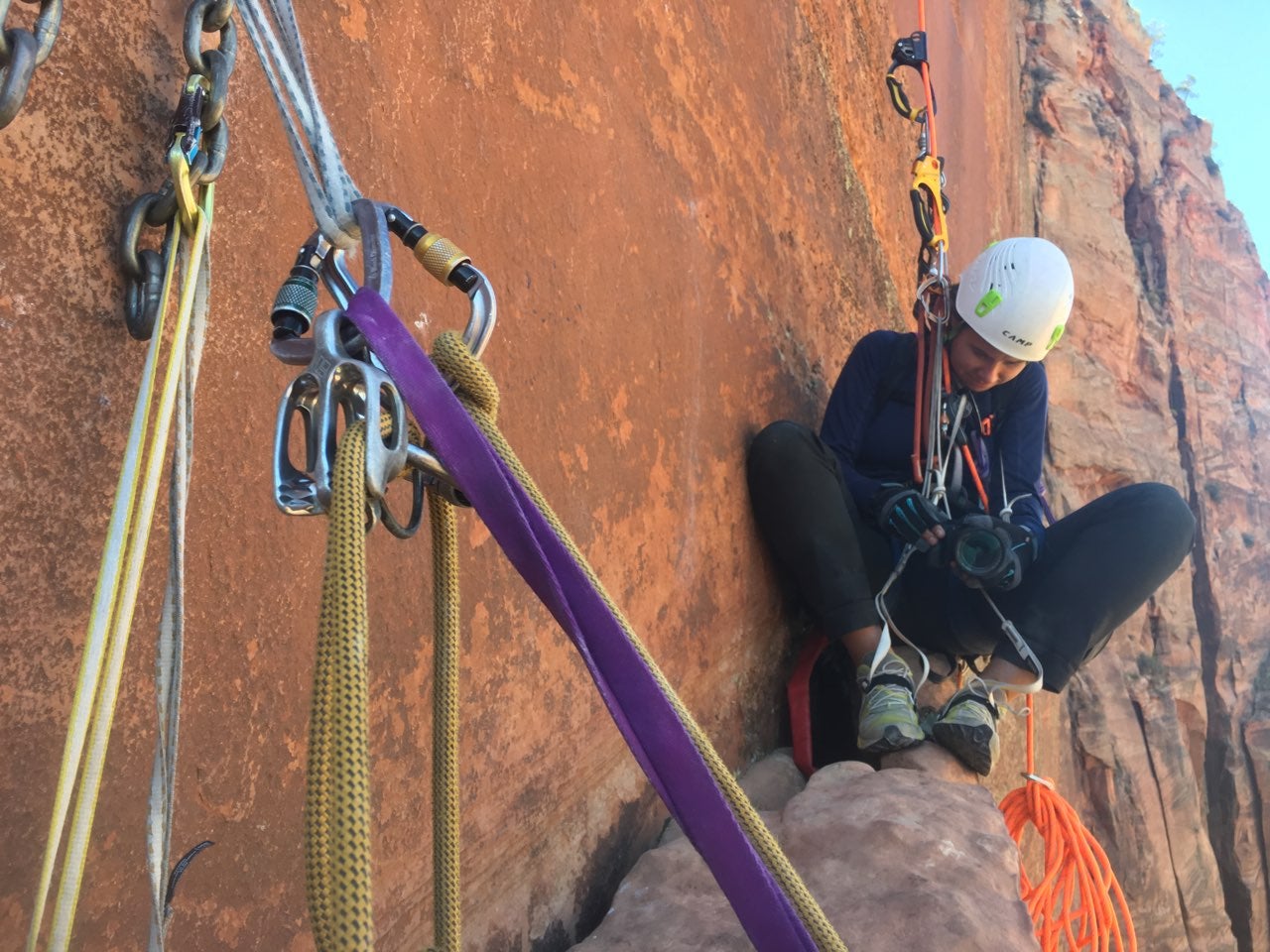 Henna, what was it like being on the wall next to her while Jenny goes through this?

Henna: "There are a lot of nuances in filming someone so deep in a struggle. Mostly you’re trying to disappear but you are also the only two people up there in that moment so to cut off completely seems inauthentic and not exactly real. When not to say anything, not to move at all, when to offer some connection but not so much that it de-rails them from what’s going on for them. We knew we wanted to get really tight shots from the beginning and I wasn’t always prepared with a long lens for the moments (sometimes fleeting) when I really wanted to capture that intimacy so I would get really close to Jenny as she climbed. Again trying to find that edge. How close can I push this proximity without throwing Jenny off? It’s all a game of nuances. Some failures some successes."

Jenny, when do you think you first became aware of that inner voice—like, began to hear it for what it is?

Jenny: "I honestly think Moonlight was a huge turning point for me. I had just moved to Bend, and was getting settled into my own life that didn’t include living in a van or chasing anyone else’s dreams. I was becoming stable, for the first time in a long time, and with that, I was loosening my grip on climbing. I think I needed climbing for so long, to define me, to give me a place in what felt like was a very turbulent world. I needed it to hang my hat on at the end of the day, and was largely motivated to choose it out of fear—what would I be without this?!—rather than love—I really, really want to do this. But as I began to feel my way into a fuller life in Bend, I didn’t need climbing so much for survival, and so I began to shed the parts of it that weren’t serving me. Trying Moonlight was some of the last vestiges of my tight grip on climbing, something I did because I should, or needed to, rather than because I wanted to. I could really, tangibly, feel the dichotomy up on the wall, between myself and the self that I was forcing, in large part because my SELF was growing larger. It was learning to speak. 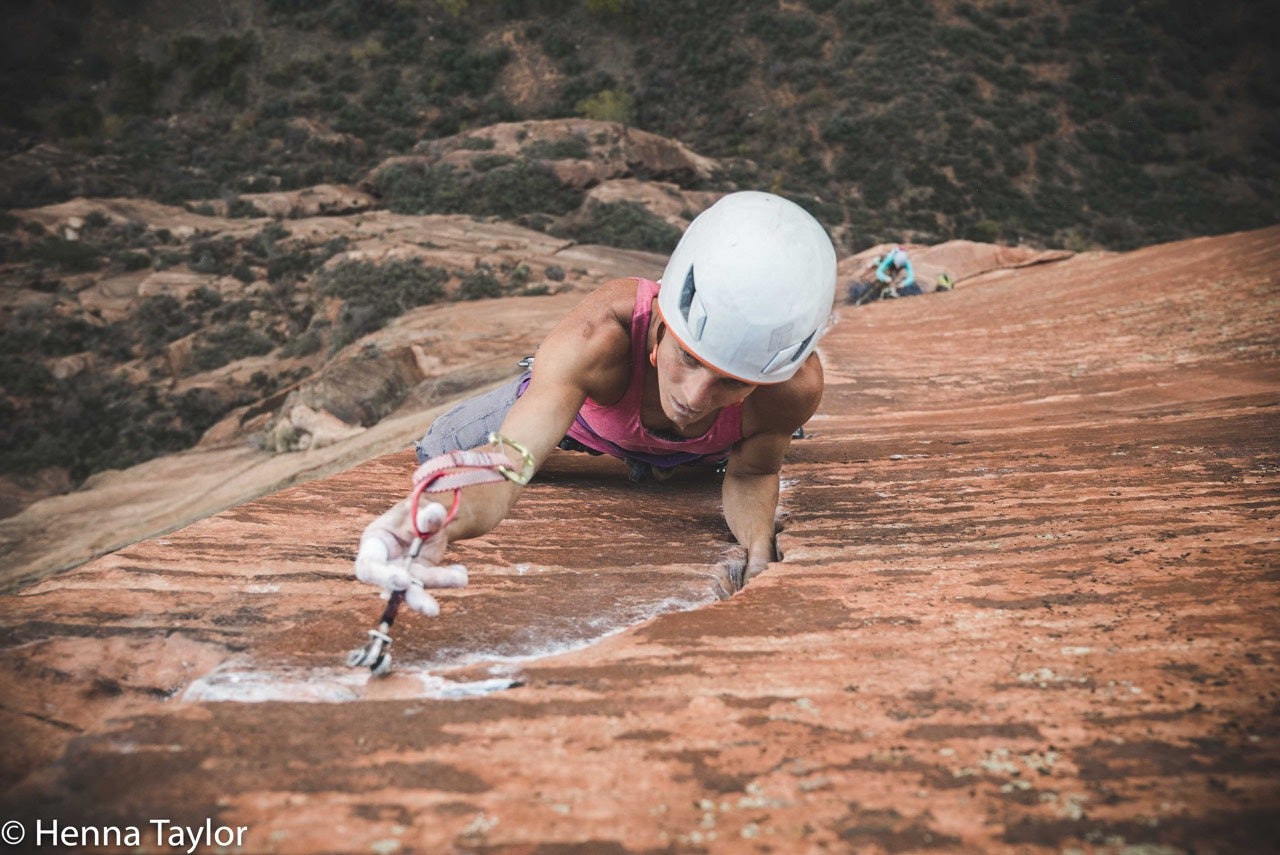 "In many ways, the voices in this film don’t separate along lines of 'myself' and 'my shoulds,' or good or bad voices. Many times throughout the climb I said things like 'I don’t want to be here,' or 'I don’t want to be me right now.' That’s me, fighting back. Saying, 'Hold up. Who’s dream are we living?! I know better than this! I know what I want and this isn’t it!' And many of the more negative voices, in my opinion, are the result of me just not following my gut, my heart. I didn’t want to be there and I was revolting against myself. I think had I wanted to be there, I would have been speaking much more softly to myself."

What, now, does speaking more softly to yourself look like on a day-to-day basis?

Jenny: "I think speaking softly is so much larger than just having good, positive self talk. Dumbing it down to that feels totally self-helpy and hollow to me. It’s got to be more full scale, otherwise, you’re just forcing positivity and it’s totally dishonest and not sustainable. I think it begins with listening, getting close, learning what it’s like to be in communion with yourself. Finding that sense of self and inner voice, and asking, 'What do I want, aside from what my parents tell me to want, or societal norms, or social media or friends or even past versions of myself?' In fact, it seems most difficult to separate what I want from what past versions of myself wanted. And then, having the clarity to answer honestly. Then, you can start speaking softly.