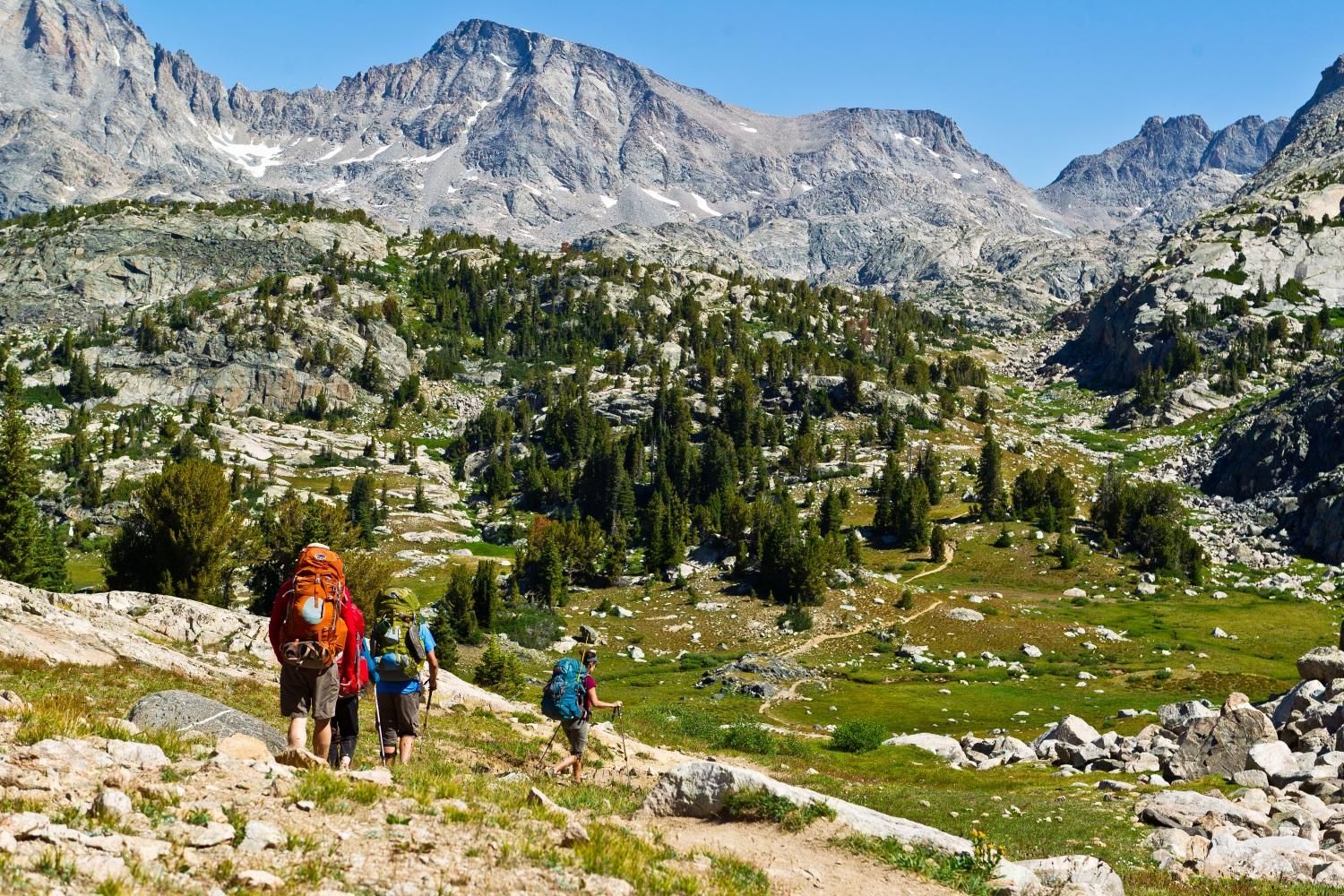 Season: July-September. Expect snow on the higher trails well into July, and be prepared for unexpected winter storms in late season. The Winds almost always see a brief snowstorm in late August or early September, followed by two to four more weeks of good weather. August is the best time to come, after the hordes of mosquitoes have left and before the fall chill arrives.

Getting There: For an area that feels so remote, access to Titcomb Basin is surprisingly simple. Your first step is to find your way to Pinedale, WY on U.S. Hwy 191. From Pinedale, follow the paved Fremont Lake road out of the south edge of town and head east for 14 miles to a campground and parking lot at Elkhart Park. Titcomb Basin is located in the Bridger Wilderness and National Forest, and while you don't need a permit to hike and camp in the Basin you still need to sign in at the trailhead. Wilderness regulations do apply for camp locations, group size, and campfire restrictions. Take the Pole Creek Trail from the trailhead for five and a half miles until you reach the Seneca Lake Trail. Take the left fork and follow this trail for six miles until you come to the junction with Indian Pass Trail. Turn left again and continue for a few miles until you reach Titcomb Lakes. Set up camp along the east side of the lakes, underneath the towering granite escarpments of Mt. Sacagawea and Fremont Peak.

What You Need: While Titcomb Basin's stunning alpine landscape nestled amongst soaring sawtooth peaks will make you feel like you're on an expedition deep in the Alaskan bush, the area's fantastic ease of access means you don't need to bring any more gear than you would on a typical overnight backpacking trip. That said, the Titcomb Lakes lie at over 10,000ft, so make sure to bring warm layers to put on while you share campfire stories and laughter beneath the brightest stars you've ever seen. Those arriving in July should make room in their packs for copious amounts of bug spray, as hordes of hungry mosquitoes inhabit the basin each year following spring snowmelt. For trips in late August or early September, be prepared for an early winter storm that could unexpectedly bring several inches of snow. The alpine lakes surrounding Titcomb Basin provide excellent fishing opportunities, so bring a rod and impress all your friends when you walk back into camp with several cutthroat and brook trout for dinner. Many of the surrounding peaks can be climbed via easy scrambling, but a small alpine rack, rope, and helmets are a good idea if you're planning to do any technical climbing. Whatever you do, make sure to bring a camera - you'll want to capture forever those evenings when the sun drops low in the sky, illuminating the three dimensional peaks and ridges into a mesmerizing display of shadows and alpenglow.

History: Titcomb Basin draws its name from brothers Charles and Harold Titcomb, who were some of the first to explore the area in 1901, though fur-trappers had been active in the western Wind River Range since the 1830s. In fact, Fremont Peak got its name from legendary explorer Charles Fremont, who visited the area and climbed the peak in 1842. Hiking into Titcomb Basin is a popular trek today, but very few had ventured into the valley by the early 1900s, which makes it all the more impressive that in 1924, Colorado climbers Carl Blaurock, Herman Buhl, and Albert Ellingwood completed the first ascent of Mt. Helen, one of the most impressive peaks in the area. Ellingwood would return two years later to climb the mountain again en route to first ascents of Mt. Sacagawea, Ellingwood Peak, and Knife Point Mountain. Titcomb Basin is still popular amongst climbers today because of a wide variety of climbing that offers everything from easy walk-ups to difficult rock and ice routes in a wild and remote setting.

Local Beta:While most National Parks and wilderness areas prohibit dogs, the Bridger Wilderness and National Forest is a welcome place to bring your favorite four-legged partner in crime. Just remember that most visitors head into this area seeking silence, beauty, and solitude, so make sure that your pup is on his best behavior and doesn't antagonize other parties or wildlife.

Extra Time: A trip into Titcomb Basin is an unforgettable experience even if you never venture far from the trail, but if you have some extra time, plan a day hike from Titcomb Lakes over Knapsack Col and back around Peak and Jean Lakes. As you move out of the flat basin and up into the heart of the rocky spires you'll be rewarded with expansive views of hanging glaciers above, rolling alpine meadows and hills below, and the feeling that there is nowhere on Earth you'd rather be. For those feeling more adventurous, there are several fantastic technical rock climbs on Mt. Sacagawea, Fremont Peak, and Mt. Helen, all of which loom high over your camp in Titcomb Basin below. If a trek into the Basin leaves you wanting to explore more of the wild Wind River Range, consider a trip into the unbelievable Cirque of the Towers in the southern Winds.

Athlete's Perspective: "The Wind Rivers are a classic place to go backpacking because you can hike ten miles from a trailhead, don't have to gain that much elevation, and all of a sudden you're in this beautiful alpine setting with big peaks, and snow, and glaciers. You don't have to go over big passes or do really long approaches to get there. It is very different from the Sierra or the Rockies." – Becca Cahall