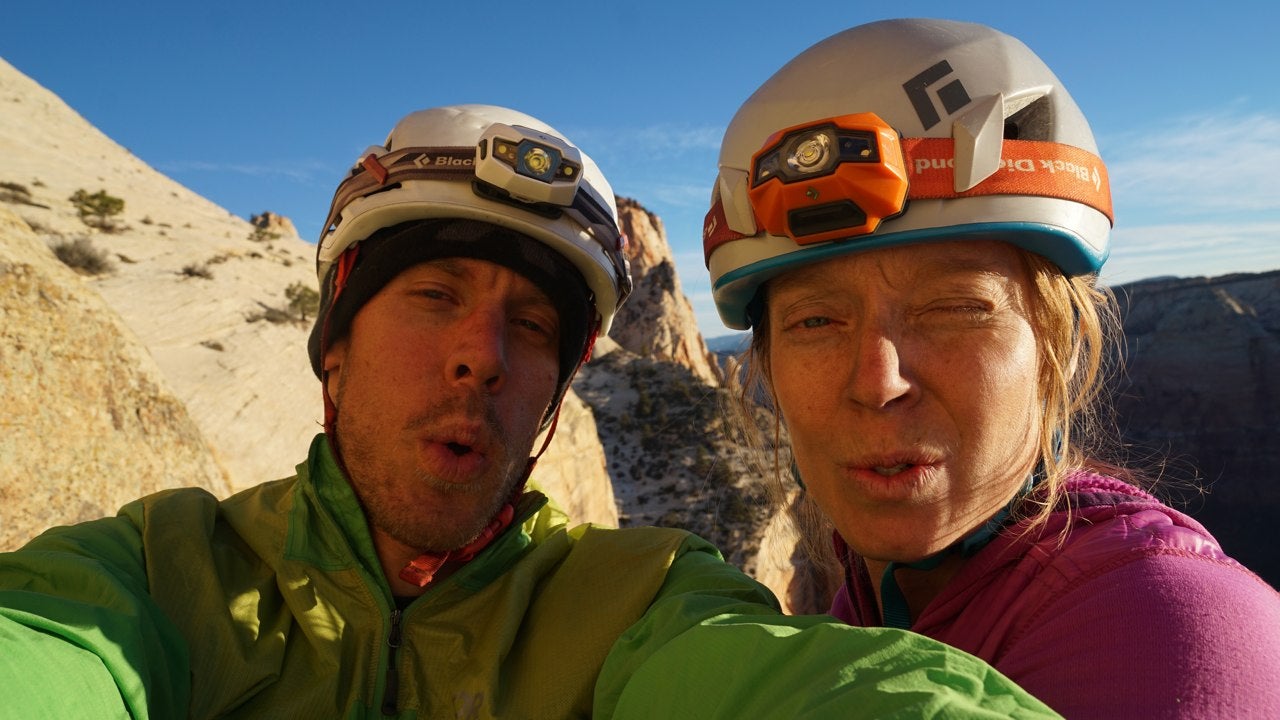 New Years is a holiday I always look forward to: a celebration of the beautiful experiences of the previous year, and intention for growth in the coming year. This New Years, we’ll be in China—the end of December is my 30th birthday, and I get to celebrate with my boyfriend Kyle, ice climbing in Sichuan. On the Chinese calendar, this is the Year of the Sheep (the New Year won’t come in China until February 8, when it will become the Year of the Monkey). For the Chinese, the Sheep signals a year of promise and prosperity. Prosperity sounds nice, but for me, the past year could be summed up as the Year of the Bonk. From aid climbs in Zion to mountain moseys in the Canadian Rockies to alpine jaunts in the Alaska Range, I’ve had more sleepless nights, days without food and sitting bivies on route than I’d like to count. Sometimes the suffering is planned—it’s 'easier’ to just do a long push than to haul a portaledge. Other times it’s a surprise. No, I would never actually strategize a day without food. But I’m starting to wonder how I ended up with a bunch of suffer machines as climbing partners. So if you find yourself roped up for longer than you’d like, with or without enough food, below are some signs that you might be bonking.

You try to count calories that don’t count.
This spring on the Denali Diamond, Chantel and I found ourselves thinking wishfully about cheeseburgers and quesadillas. If your usual cravings for carrots and Brussels sprouts become desires for grilled cheese, if you’re jonesing for a burger but it’s still a day of climbing, a long descent, and a plane ride away: you might be bonking. 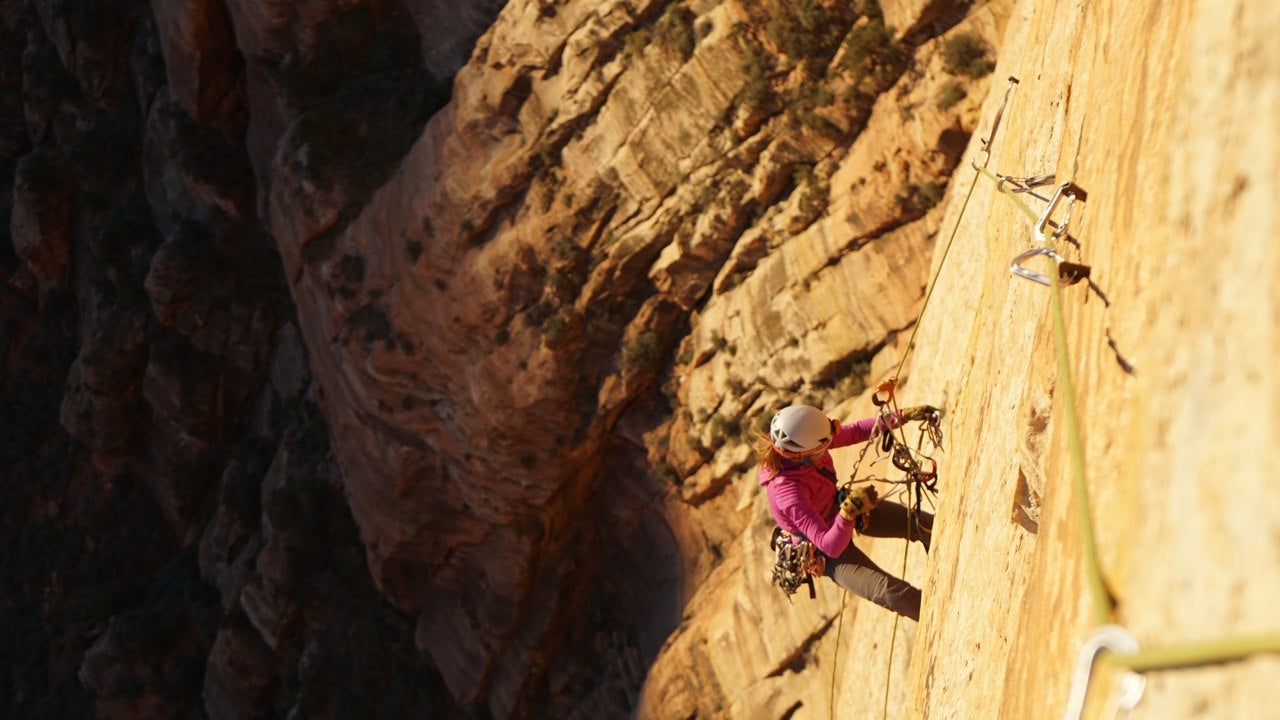 It’s your partner’s fault that your pitch is hard.
There we were, high on the Streaked Wall in Zion National Park. Actually, we didn’t know how high we were because the sun had gone down many hours before and our headlamps shone mostly on the next placement. For Thanksgiving, Kyle and I had decided to pass on the turkey and instead feast on sunny sandstone. We had never climbed the Streaked Wall, and when we learned about the laborious approach and descent, we decided to skip out on a portaledge and climb in a push. To say the least, at the end of the day, we had had our fill of hammering bird beaks, top-stepping on crumbly placements and struggling through squeeze chimneys. But as the sun went down, we clicked on our headlamps and went for second helpings—we still had several pitches to go and we found no ledges on the gently overhanging wall. Stepping high on a hook placement, I stretched to set another hook. Pulling down on it, I quickly decided it was set, clipped my etrier to it and stood up. Suddenly I was weightless, gear and aiders floating around me in the dark, until the rope pulled tight and I slammed into the wall. I guess the hook wasn’t set. Climbing back up, I stood on my last good hook and felt the placement I’d fallen on. The placement had blown out, and this time when I set the hook I pulled out the hammer and tapped it a few times, trying to solidify it. After testing it, I stood up gingerly and was in the middle of placing the next piece when I found myself weightless once more. After coming to a stop, I pointed my headlamp at Kyle, thinking wistfully of the portaledge. "Whythehellarethehooksblowing?!" I struggled to disentangle myself from a mess of gear. Kyle smiled at me and pulled out a Probar. "Want a bite?" Oh. Right. Kyle didn’t blow out the hook placements. Jewell: bonking.

The space that is needed to lie down and rest becomes progressively smaller and less flat.
Sunlight had long since left the Northeast Buttress of Howse Peak and we raced to fit in more pitches as the shadows grew longer. But the climbing was thoughtful and the rock shockingly bad. We could only climb so fast. I clicked on my headlamp as I topped out a pitch, ending on a steep scree slope. By the time Chantel followed, arriving at the belay, my headlamp flickered and died. (Beware headlamps with rechargeable batteries.) Suddenly the scree slope looked like it might be a nice spot to hang out. We pulled out our piolets and managed to chop the rock (yes, the rock) into a small bench. We pulled out our sleeping bags and spent the night on this bench, sometimes dozing and other times watching thunderstorms brew to the east. When a scree slope begins to look like a spot to lie down, beware the Bonk. 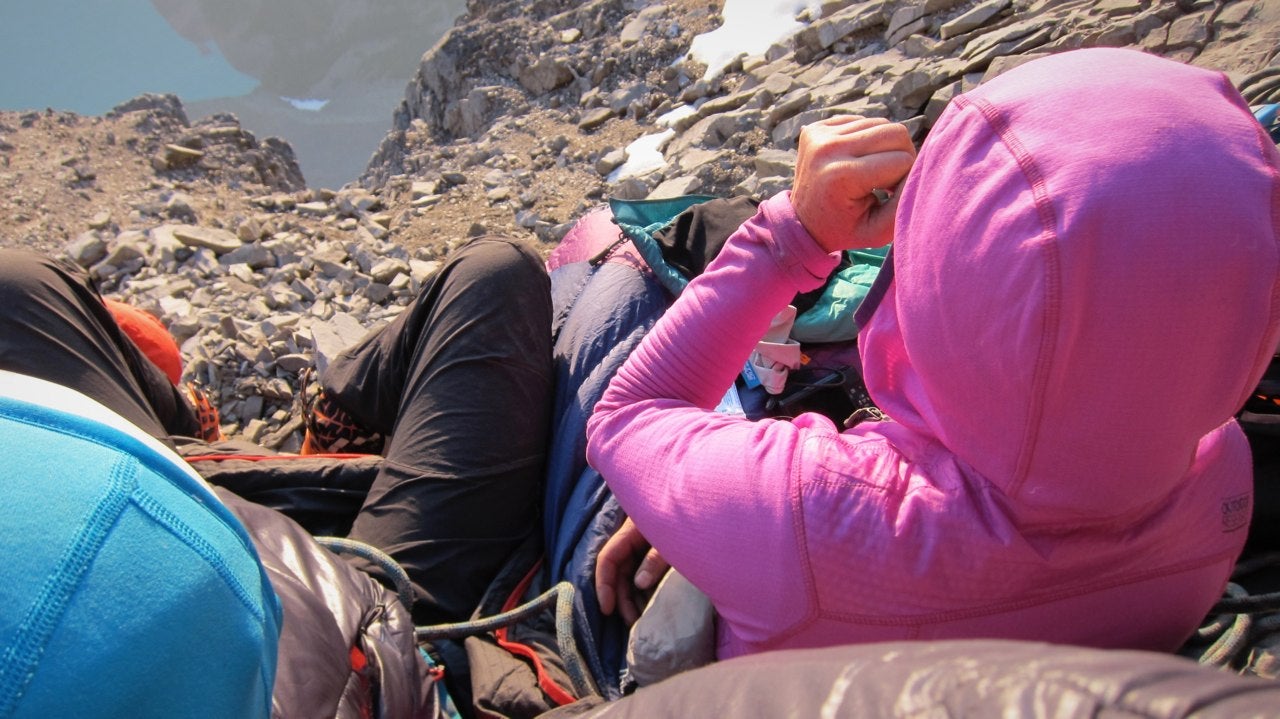 Whether I like it or not, I’ve started to become familiar with how my body responds to caloric deficits and too many hours without sleep. Often we can deal with deep states of fatigue—colors just become a little less bright, ridgelines a little less sharp and conversation a lot more simple. Through the fatigue, though, it’s certainly best to avoid the Bonk. Because once you’ve bonked, you’re dull, grumpy and debilitated—but you still have to navigate whatever climbing and descending is ahead of you, safely. It’s sneaky though, that Bonk. It can creep up on you without a sound, like the High Sierra marmots that eat your climbing shoe rubber while you’re racking up in camp. Cheers to all your funventures this New Year, and good luck avoiding that Bonk!