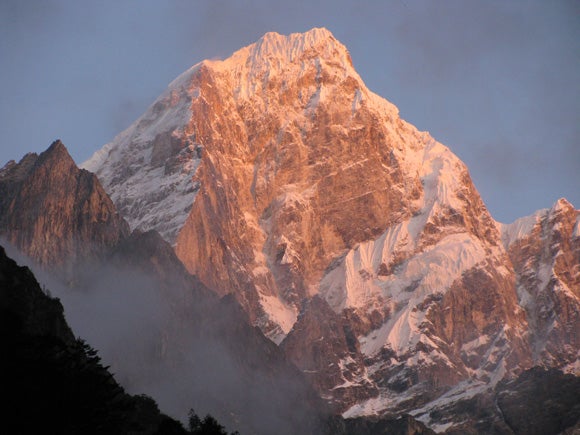 At the end of the summer, I quit climbing. The decision was made after Yosemite hardman Skiyler Detray and I dragged our asses over the summit of the Nose, 29 hours after starting up the Regular Northwest of Half Dome. “I’m over it, my tendons feel like parched beef jerky,” I remarked. My shoulders ached and my hands were bludgeoned after jamming, crimping, and contorting. Driving out of The Valley and sipping beers across the desolate Hwy 6 toward Salt Lake City and home, I had plenty of time to think “I need to find something else.”

My motivation to climb had been on a roller coaster all summer. In April I was flown to France and received the 2010 Piolet D’ Or, a ego thumping event that would be a lie to say I didn’t at least partially enjoy. It was neat to receive recognition for an amazing route that we had climbed in 2009, but I was sick of talking about the past. The glamour and glitz of the event felt as far removed as possible from the act of climbing itself, and my mind was mostly focused on returning to Pakistan. Plans were going smoothly and I was training hard, achieving some personal firsts in the weight room and on the rock. Then flooding. The heaviest precipitation recorded in the country’s history caused massive damage to Pakistan’s infrastructure and heavy snow fell in the mountains. Trying to climb in the Karakoram was not looking hopeful, so we pulled the plug.

And now it was the end of August and after an entire summer stateside I was totally fried on rock climbing. “I need something to focus on,” I thought while cruising through Nevada, road soda in hand, speedometer pegged at 74mph. Maybe I’ll read for a month, ha yeah right! Swimming? Tennis? Shit, golf? Then as I drove past a field of grazing horses, it came to me, The Horseshoe Loop.

The Horseshoe Loop (or Wasatch Ultimate Ridge Linkup WURL) was concocted, as I know it, by ultra badass marathon man and Salt Lake City local Jared Cambell. The run-hike-climb is a 34-mile circumnavigation of Little Cottonwood Canyon and involves 21,000ft of vertical gain and 21,000ft of vertical loss. It includes everything from good trail to 5.7 choss climbing, and many, many miles of boulder hopping. The route tags the summits of 22 of the 35 highest peaks in the entire Wasatch Range and includes some truly spectacular scenery.

During the month of September, I trained specifically for the Horseshoe by doing trail runs intermixed with easy soloing, and long hikes with big vertical gains. Running does not come naturally for me and I find it painful, slightly boring, and extremely monotonous. That said the benefits and similarities between running and alpine climbing are undeniable. Both sports involve long continuous movement at high levels of intensity (commitment) and laborious breathing. This results in the release of endorphins that carry an athlete over a physical threshold. Whether you call it “runner’s high” or “alpine warrior mode” the effect is addicting.

In early fall, the trail ahead was looking good. With a chill in the air, the Horseshoe Loop was already covered in an early season blanket of snow. I had dusted off my ice axes, clenched them in my hands, and made my best warrior face. On October 15th I left for Sichuan China and seven weeks of alpine climbing. Climbing with fellow Piolet winner and friend Bruce Normand aka “The Scientist,” we explored the Minya Konka range with hopes to pay particular attention to Grosvenor 6367m, Jiazi 6540m, Mt. Edgar 6618m, and Minya Konka 7556m.